TC Kline’s suspension tuning transforms the entry-level 128i Coupe into a car that can rival the 1 Series M Coupe for pure driving fun. 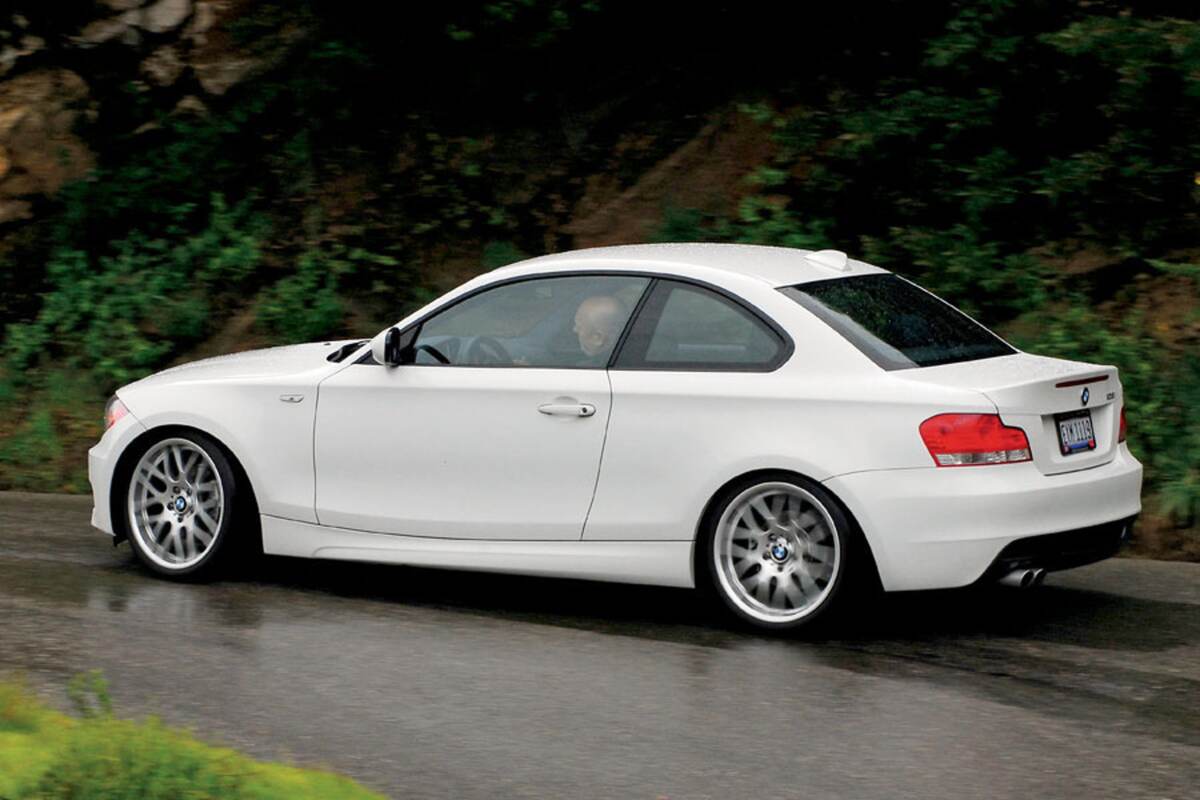 There aren’t too many bona fide BMW suspension gurus in the U.S., but one name turns up on the list more than just about any other: TC Kline. Kline started on the path to suspension enlightenment in the 1980s, when such expertise was rare, and he opened TC Kline Racing in 1998 to offer BMW suspension systems tuned for ultimate performance.

“When I started road racing in the early 1980s, I was racing in classes where you weren’t really allowed to do anything to the engine,” Kline recalls. “I learned early on that it was really difficult to find anyone who really knew anything about tuning the suspension…and it still is. A lot of good shops can make an engine better, but I’ve seen some BMW race teams take years to really understand what’s going on with the chassis.”

Kline decided to focus his efforts on chassis development, doing much of his early research on an E30 325is he was racing.

“To me, what separates road racing from any other kind of racing is the importance of dynamic handling,” he says. “The better handling a car is, the quicker it’s going to be and the more fun it’s going to be to drive.”

Earlier this year, I spent a day getting schooled on Kline’s suspension philosophy at his Santa Barbara shop, then spent almost 1,000 miles experiencing it firsthand, taking his 128i Coupe on an extended road trip. With performance mods limited to the suspension and wheels, the car provided a great opportunity to see how good this base BMW can be when its one true weakness is addressed.

Center on the shocks 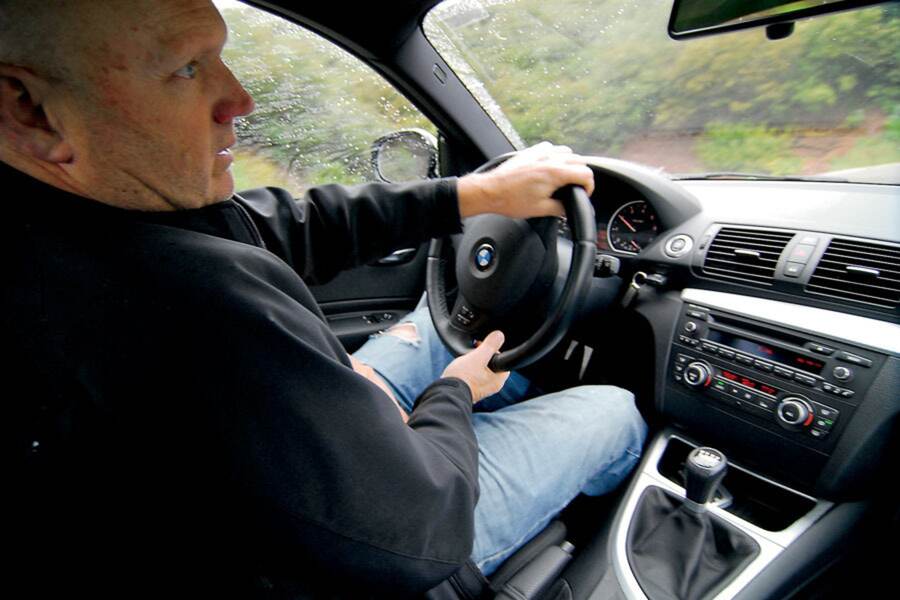 Optimizing a car’s dynamic handling involves getting many different components to work together in the right way, but Kline’s philosophy centers on the shocks.

“If there’s any message I’d like to get out there, it’s that the best suspension is not the one with the most spring rate, but the one with the best shock damping that’s designed to work with the chassis and has as little spring rate as you can put in that gives you the best handling,” he says. “That’s the optimum setup for any race car, even an F1 car.”

Even in high-level racing, Kline says, a lot of teams set their cars up far too stiffly for optimum handling. “If they can’t get the power down coming out of a turn, they’re usually too stiff.”

The problem, he says, often stems from driver assumptions about setup.

“If they feel any roll in the car, they automatically think they need it stiffer,” Kline explains, “but that’s not necessarily the right answer.”

We often hear or read about cars that have “go-kart handling” with no body roll, but reducing body roll too much can actually hinder more than it helps. 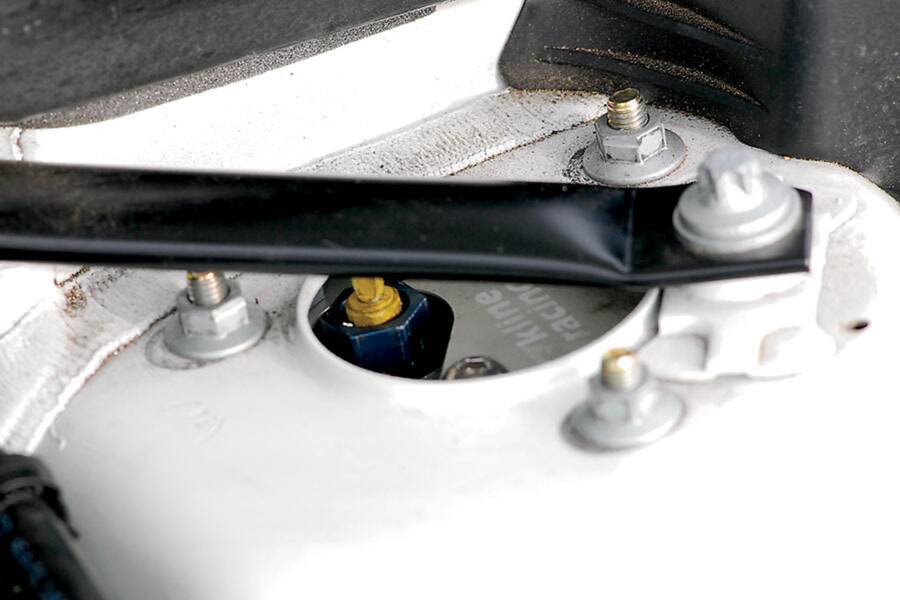 “Body roll is your friend, because you want to make the transition from no lateral grip with the tire to maximum grip in a smooth consistent arc without spikes,” says Kline. “The only way you can make that transition is for the chassis to absorb some of the load. If the tires have to do it all, it feels like a go-kart but will also skate, understeer and oversteer under power and become unmanageable at the limit.”

In racing, Kline explains, the secret is to run softer springs with more shock damping.

“If you talk to the best suspension engineers at the highest levels of motorsport, they’ll all tell you that you want to run a suspension that has tremendous shock control but is still compliant,” he says. “If you put too much spring on the car, the spring is forcing a rubber deflection instead of allowing a progressive change from straight to maximum cornering lean. Optimal spring rate is determined by the tire. The more grip a tire has, the more spring rate you can run.”

From the bushings on up

Bushings also play a major role in suspension dynamics, and Kline says that the 1 Series’ rear subframe bushings—parts it shares with the mass-market 3 Series—are its biggest shortcoming. Kline says they’re too soft and have too much vertical movement for enthusiastic driving.

“If you put the 128i or 135i on a lift, you can make the rear subframe move an inch using only a pry bar because the bushings are so soft,” says Kline. 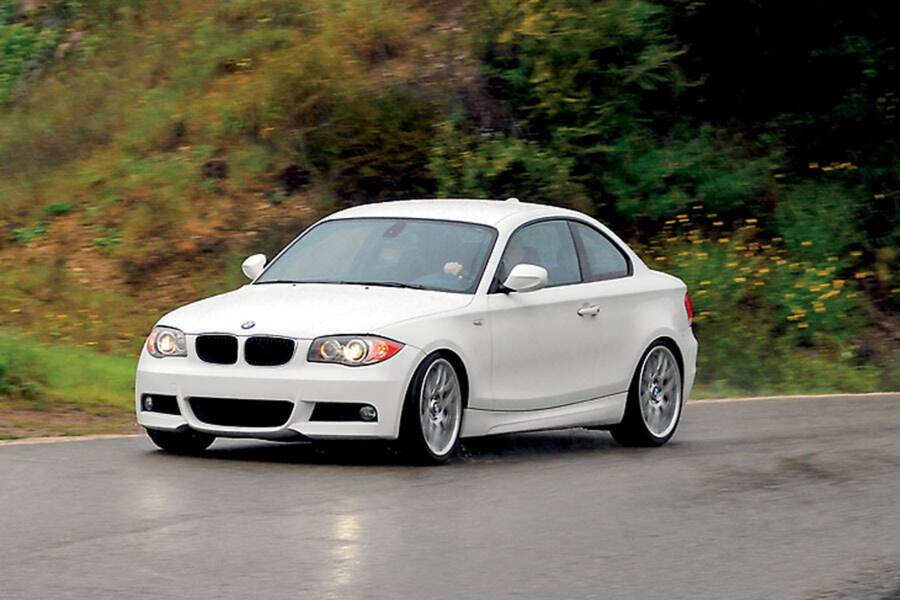 The subframe bushings must be matched to the spring rate, he says, and the car simply won’t handle as well as it should if a 1 Series owner decides to upgrade the shocks and springs without also replacing the stock subframe bushings.

“BMW did a fairly good job of matching the spring rate to the bushings for ride quality and going over bumps, but as soon as you put anything close to reasonable spring rates in the car for more performance, the bushings are totally inadequate,” Kline says. “If you put a stiffer spring on an E90/E92 3 Series or a 1 Series, you overpower the bushings and make the back of the car pogo up and down.”

Kline says this unwanted movement made development of his 1 Series suspension more difficult than expected, leading him to reduce the spring rates repeatedly until a comparison with the M3 revealed the problem.

“When we got the M3, we measured the spring rates and found that they were much higher than the 1 Series (with a 580-lb. rear spring rate compared to the 1 Series’ 350-lb.), and we knew that BMW had done something different with the bushings,” he says. “The rear end on the stock M3 doesn’t bounce up and down at all, so we tried the M3 rear subframe bushings with our suspension package and got rid of most of the pogo effect.”

Kline wanted to see how well he could make the 1 Series handle, and he was especially keen to see what could be done with the 128i. At 3,208 lbs., it’s the lightest BMW sold today, weighing 165 lbs. less than the 135i and carrying 120 fewer pounds over its front axle.

He installed rebound-adjustable Koni shocks/struts, M3 rear subframe bushings and his own camber/caster plates, set to provide around two degrees of negative camber up front and around one degree at the rear. Where the stock 128i rides on springs that measure in the neighborhood of 125 lbs. up front and 350 lbs. at the rear, Kline installed 350-lb. springs up front and 500-lb. springs at the rear. (Kline says he tried 600-lb. springs that were a little stiffer than the M3 springs, but they proved too stiff on the lighter 128i.) The rates he chose are much stiffer than stock, but they suit the car’s intended purpose as a combination track tool/daily driver. 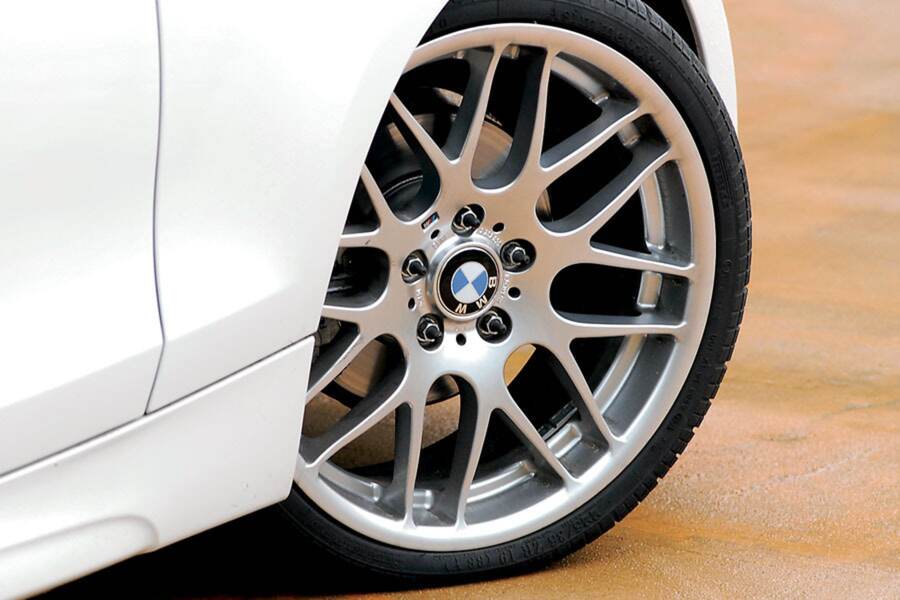 In addition to changing spring rates, Kline also installed the lightest springs he could find. “The lighter weight is due to the high-tensile special alloy we use for the springs, which are made for us in Germany,” he explains. “Then we use Koni shocks that have a very progressive valving curve, so that when you first dip into the shock (displace the piston), it’s a relatively mellow tip-in. As you load the shock more, it has a very fast accelerating curve to where it works at maximum resistance.”

Beyond the wheels, the car I drove for nearly 1,000 miles looks like a stock 128i with Sport Package, yet it handles far better. I drove it on every type of road from the city streets of Santa Barbara to twisty mountain roads and interstate highways. The car felt fantastic everywhere, but it really came alive on the mountain roads between Los Angeles and Santa Barbara. On the twists and turns of Casitas Pass Road (Route 150) east of Carpinteria, Kline’s 128i made for a very involving drive, with much more responsive turn-in and incredible grip and poise.

It had just the right amount of body roll to communicate what the chassis was doing, but it would take a quick set as the weight transferred and remained stable when driving aggressively through and out of corners. It was also very nimble in high-speed transitions, with no sloppiness as weight transferred from one side of the car to the other. Kline’s setup allowed me to toss this car around in ways that simply would not be possible in the stock 128i.

As good as it was on the back roads, it was equally impressive on the interstate. Even with stiffer springs, the car was able to soak up road seams and bumps with no handling issues or discomfort. I felt more of the road, for sure, from ripples in the pavement to the different asphalt textures, but that actually enhanced the driving experience.

I did experience some slight pogo-ing of the rear end (as Kline said I would with the shorter wheelbase), but it only occurred over bigger bumps and was never bothersome. If Kline were setting up a 1 Series to be driven exclusively on the street, he would recommend 300-350-lb. springs in the rear with taller bump stops for more ride comfort.

Even though I typically prefer a stiffer setup, I thought the car was perfect as-is. In fact, Kline’s 128i handled so well that it naturally made me wish for more power, but the 3.0-liter N52 inline six is a great engine that’s up to the task in most driving situations. It’s also relatively frugal, making the 128i as inexpensive to run as it is to buy in the first place. Modified to handle nearly as well as the 1 Series M Coupe and with a similar wheel and tire package, it might be the perfect solution for those who can’t afford—or can’t get—an M car of their own. 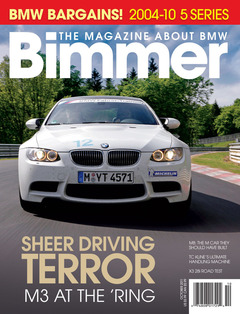