One of just 110 made, this Alpina B7 Turbo Coupe is a high-performance rarity that represents the zenith of mid-'80s technology and style. It's also Paul DiMauro's pride and joy. 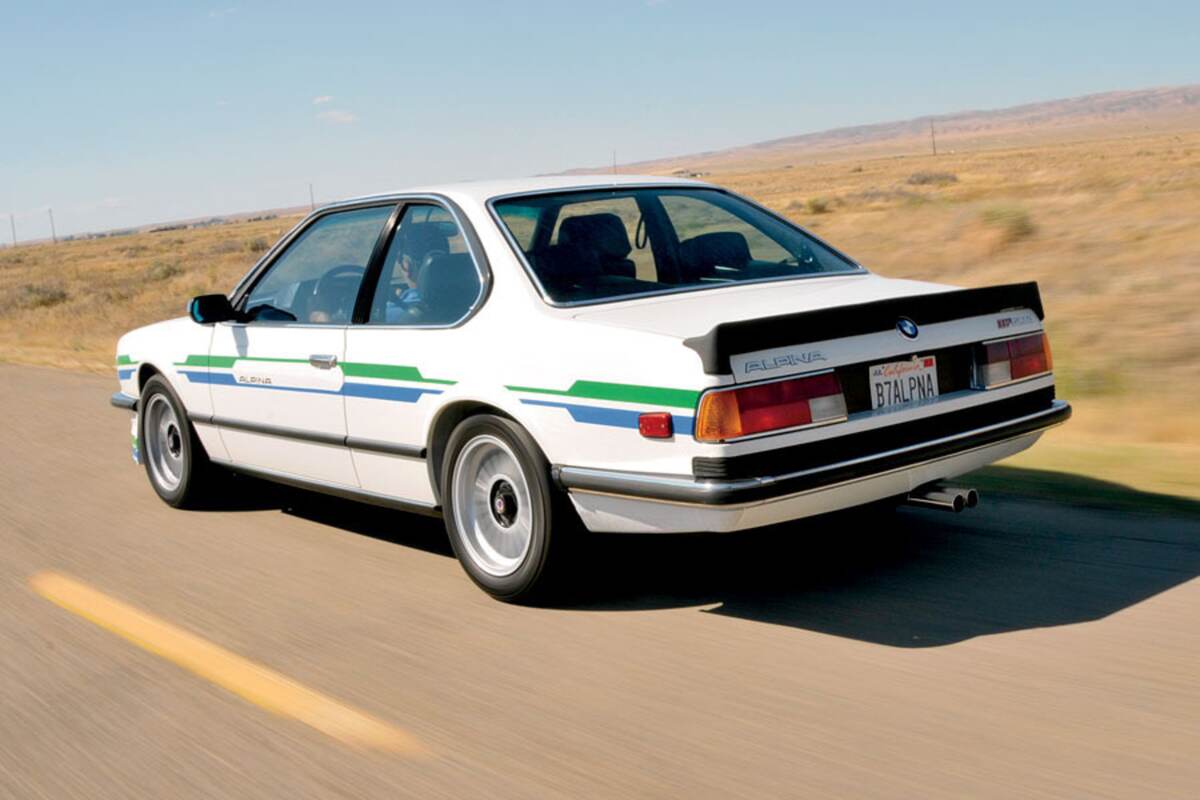 It’s a beautiful car, this Alpina B7 Turbo Coupe, complementing Paul Bracq’s sleek 6 Series design with an aggressive air dam and vintage rubber spoiler. You could spend a pleasant hour or two just contemplating its bodywork, noting how good it looks from every angle, in any light.

Dig a little deeper and it gets more compelling still. Under its hood is a 330-horsepower turbocharged six good for a 5.8-second zero-to-62 mph dash and a 165-mph top speed.

What you can’t see, however, and what the spec sheet will never reveal, is how well this Alpina handles. Plush enough to make potholes and pavement ripples disappear, this Alpina’s Bilstein shocks are also firm enough to provide sporty handling that exceeds even an M car’s. Simply put, it’s some of the best damping I’ve ever experienced on a road car, and it makes this Alpina handle like it’s on rails.

That description may be a cliché, but it’s the one that comes to mind as we wind through the corners on California’s magnificent Highway 58. Like a locomotive whose wheels are fixed in alignment, this E24 Alpina tracks with uncanny precision. Its wheelbase measures 103.5 inches atop track widths of just over 57 inches front and rear, making the car feel long and narrow. Predictably, it’s ultra-stable at speed; surprisingly, it’s also quite nimble in the turns, once the driver adapts to its recirculating ball steering and minimal power assist. It can’t compete with a newer BMW for rapid response and fast direction changes, but it will hustle through the twisties at a brisk rate, nonetheless, should the road and the occasion demand. 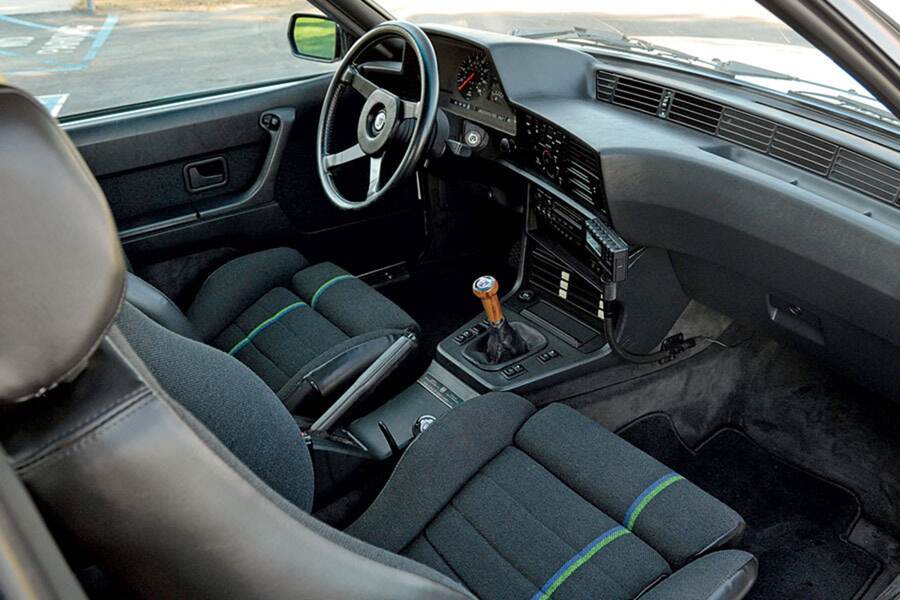 More often than not, though, you’ll find yourself seduced by the car’s Grand Touring luxury, by its effortless high speed and fine interior appointments…and by that amazingly supple suspension that imparts an unmistakable feeling of superb engineering and exceptional quality.

Of genius, so to speak.

The last word in E24 performance

We’re driving a 1985 B7 Turbo Coupe/1. Number 012 of 110, the car is owned by Paul DiMauro, an E24 6 Series enthusiast extraordinare who’s one of the forces behind the Pacific Sharkfest celebration of all things E24. He’s been a 6 Series fan since he first laid eyes on one back in 1984, right about the time this Alpina was being built in Buchloe, Bavaria, and he’s owned an M6 since 1998. This car, however, is his pride and joy, representing not just his passion for the 6 Series but the best of Alpina technology in the mid-1980s. 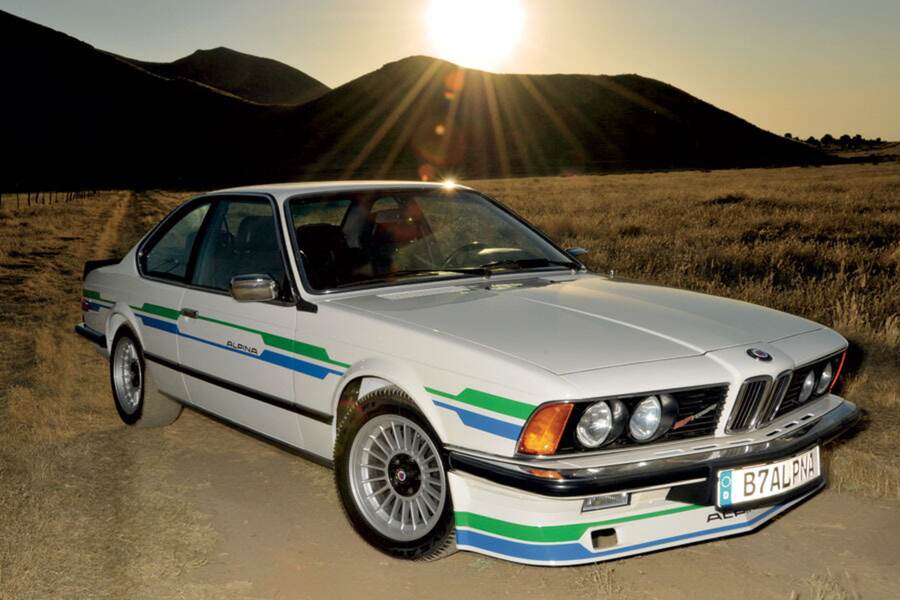 That 3,430cc M30 is the powerplant that fills the engine bay in DiMauro’s car, and it’s impressive. Each cylinder is fitted with a cast Mahle piston with a compression ratio of 8.0:1 inside the hemispherical combustion chamber. Bosch Motronic II engine management meters fuel and ignition, and an intercooled Kühle, Kopp and Kausch K27 turbocharger with variable boost pressure (adjustable to a maximum of 1.9 bar) allows the engine to put out 378 lb-ft of torque at 2,400 rpm in addition to 330 hp. 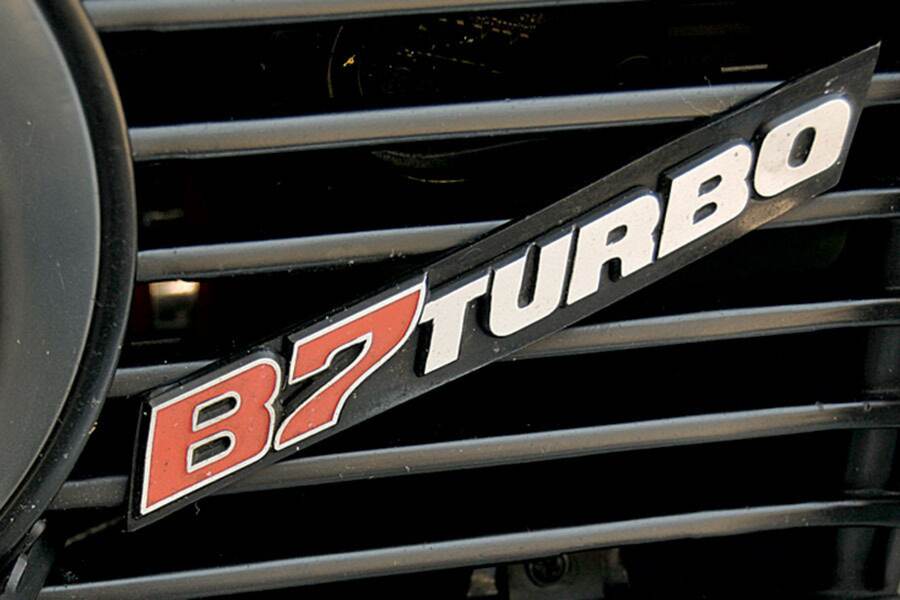 The Alpina customer got much more than a powerful engine for that price premium, however. The car is also equipped with a five-speed, close-ratio, overdrive ZF gearbox mated to a 3.07 limited slip differential. It rides on Bilstein shocks and progressive springs built to Alpina specifications, with 19mm front and 14.5mm rear anti-roll bars. (The 635CSi uses a 19mm front and 15.5mm rear bar.) A set of 7.0 × 16-inch front and 8.0 × 16-inch rear Alpina alloy wheels are shod with 205/55 and 225/50 tires, and the brakes have been upgraded with 300mm grooved and ventilated discs up front paired with the stock 284mm discs at the rear. A rubber spoiler on the trunk lid—an Alpina item rather than the standard BMW part—and a deep front spoiler add aerodynamic stability at speed.

As interesting as its mechanical specification may be, the car is equally captivating inside. Its cockpit is dominated by a four-spoke Alpina steering wheel, and one of its dashboard vents has been taken over by an onboard computer whose digital instruments display engine oil temperature, engine oil pressure, differential temperature and turbo boost level, the latter of which is adjustable via a knob on the center console. Its well-bolstered Recaro seats are covered in grippy Alpina cloth, and an Alpina shift knob falls readily to hand when it’s time to change gears.

The trunk houses one of the B7 Turbo Coupe’s most interesting features, but you’ll have to peel back the carpet to see it. To allow even more range for its fast and luxurious Grand Touring coupe, Alpina fitted the car with an auxiliary fuel tank that brings gasoline capacity up to 24 gallons. 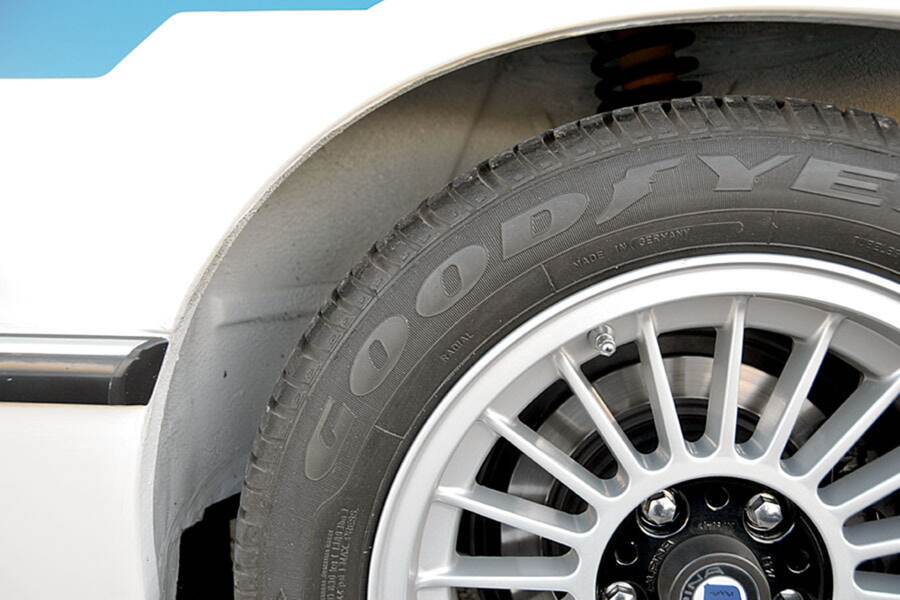 The quest for the Holy Grail

As the highest-spec E24 6 Series built by Alpina, the car is indeed the “Holy Grail of E24s,” as DiMauro claims. He should know, being among the most dedicated 6 Series enthusiasts in the country. Actually, to call him a 6 Series enthusiast is an understatement; he’s been obsessed by the cars since he first caught sight of one back in 1984.

“I’ll never forget that day,” DiMauro says. “I went to see an attorney about someone who hadn’t paid me, and the attorney rolled up to his office in a 635. My jaw dropped, my knees buckled, I drooled. I was just floored by it.”

As a 30-year-old tradesman with a young family, however, DiMauro was in no position to get a 6 Series of his own just yet. 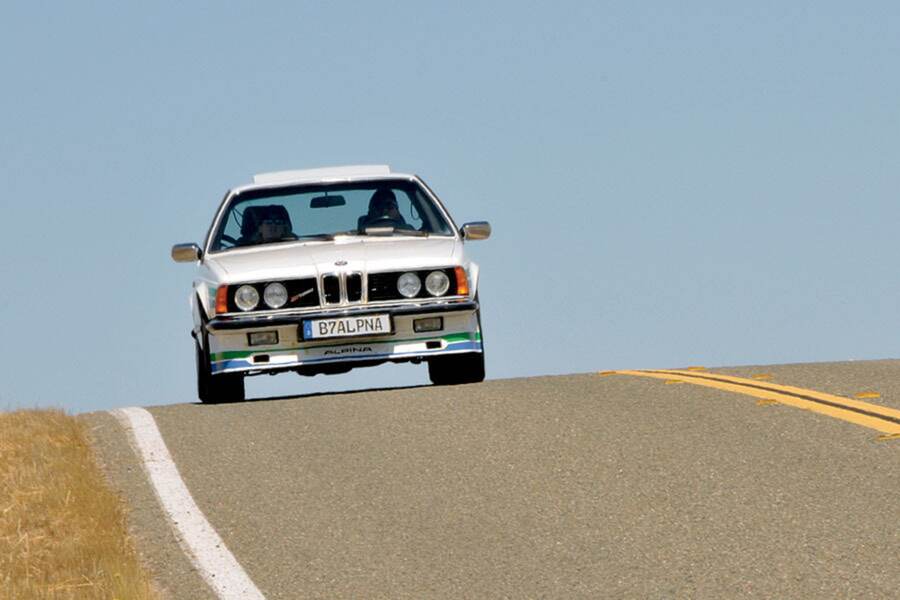 “We were living in Big Sur, and I had a pickup truck and a Volvo wagon!” he laughs. “But someday, I told myself, I’m going to own one of those.”

Someday came in 1998, when DiMauro found a Sixer on e-Bay and had it shipped to California from St. Louis, Missouri. Sadly, the car that had looked so good in photos turned out to be thoroughly rusted under a fresh coat of paint, but DiMauro—along with other customers who’d been bilked by the same company—was able to get his money back thanks to the diligence of the Missouri attorney general’s office.

With that car gone, DiMauro was again in the market for a 6 Series.

“And then I made the mistake of driving an M car,” he says. “If you don’t want to spend the money, don’t get behind the wheel of an M car!” 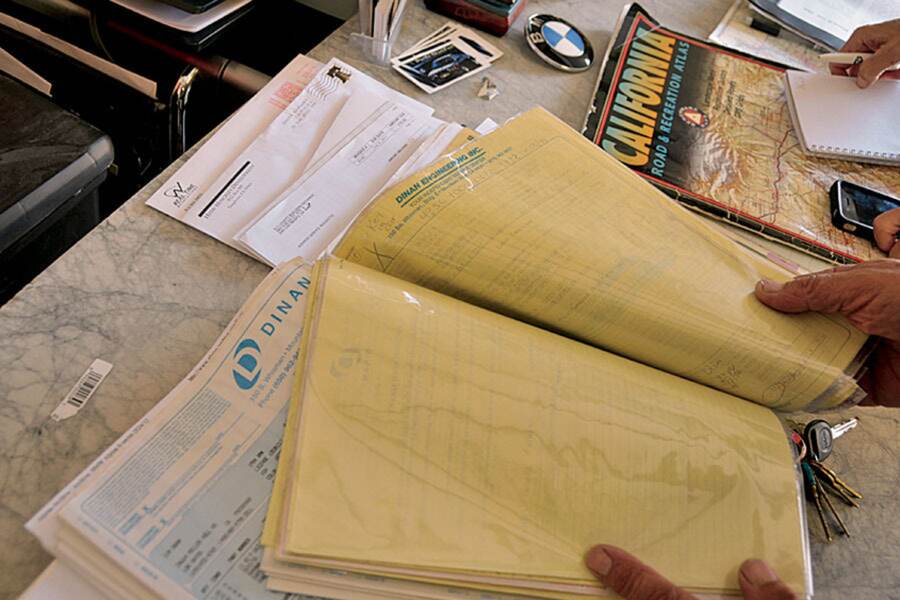 He was immediately spoiled, and no standard E24 would do. He found a Dinan-maintained M6 in Los Angeles and has been driving it regularly for the last dozen years. As good as the M6 was, however, he soon set his sights on something even better: an Alpina B7, the most powerful of the company’s E24-based models.

He’d been looking for a while when one of his E24 buddies mentioned an Alpina for sale nearby and asked if Paul had seen it. He hadn’t, but a quick scan of Craigslist turned up a B7 Turbo Coupe being advertised in Santa Cruz, just up the road from DiMauro’s house in Carmel Valley.

“I was looking at trying to get one from Japan or Germany, and this one was right in my neighborhood!” he laughs. “I went to see it that afternoon, and it looked a little different than it does now. The spoiler was white, the wheels were white—very ’80s!—and it didn’t have the Alpina Deko Kit on it.”

The car was intact, however, right down to its Alpina interior. It also drove beautifully, though DiMauro was hesitant to be very aggressive with someone else’s car. 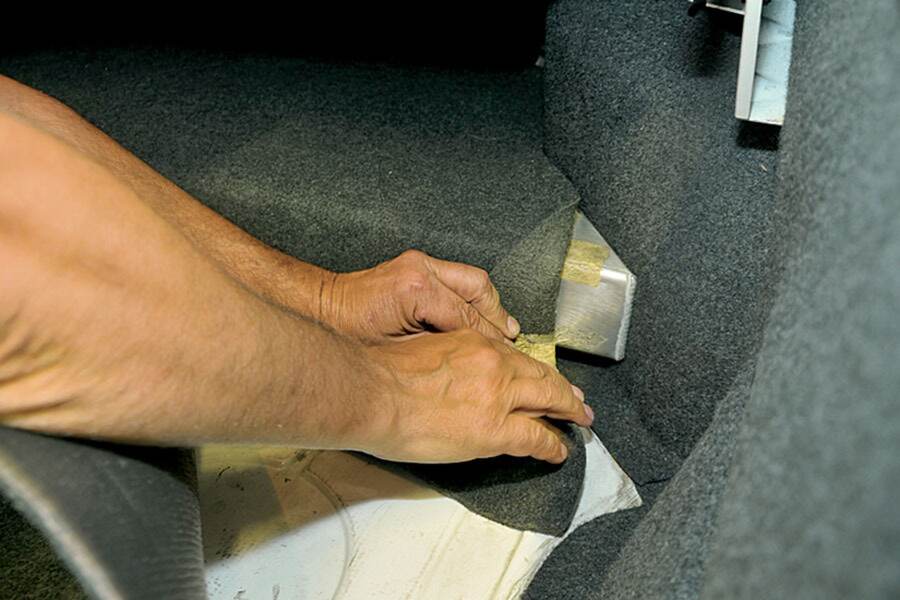 “I drove it pretty gently for a while, and then the owner, Jim Ogan, said, ‘Pull over! Let me show you what this car can do!’” DiMauro recalls. “He really let it fly on Highway 1 through Capitola—it was pretty gnarly!”

The clincher, though, came when Ogan opened the trunk to reveal a binder full of service receipts. He’d had the car since 1985, when he’d seen it at Steve Dinan’s shop in Mountain View and made its original owner—a Louisiana enthusiast who’d imported it to the U.S. not even a year earlier—an offer he couldn’t refuse.

Ogan had it serviced by Dinan ever since, and the receipts indicated that he’d taken good care of the Alpina during his tenure. He’d also driven it a lot, and the odometer was edging toward 150,000 miles when he put it up for sale.

“He’d had it for 20 years and was done with it,” DiMauro says. “He knew he had something special, but when he told me how much he wanted, it was a very reasonable price and I didn’t bicker with him. I’d brought my checkbook just in case it was authentic, and when it was, I wrote the check before anyone else had a chance to take it.” 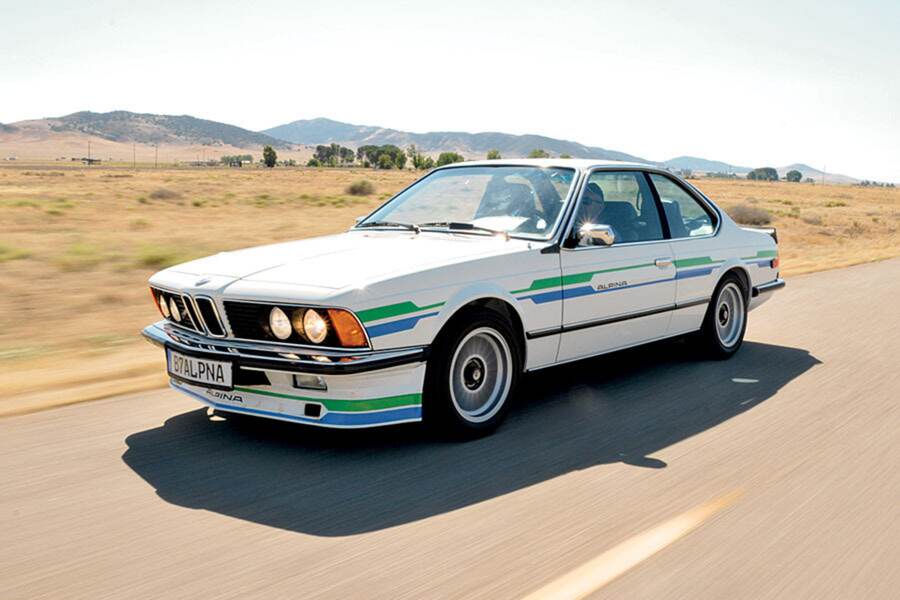 A return to as-new condition

Once it was his, DiMauro set about returning it to as-new condition, first by removing the white paint from its spoiler and wheels. He buffed its original Alpine White exterior to a fine shine, then applied one of Alpina’s blue and green Deko Kits. The original headlights were “like driving by candles,” so DiMauro followed the recommendation of lighting guru David Stern and corrected that deficiency with a set of vintage Cibies.

After so many miles, the upholstery was worn, too, so DiMauro ordered fresh cloth from Alpina and reupholstered the seats front and rear.

“This is Alpina’s retro cloth, which is different than the original Alpina cloth,” DiMauro explains. “There’s been some pressure on Alpina to make a run of the original cloth, but they’re not great about supporting these old cars. There’s no money in it. I was trying to get a dead pedal, too, but they no longer have it.”

The car also needed to have its rear Bilstein shocks rebuilt, and although Alpina offered to provide the damping specs, DiMauro was able to send them to Bilstein in Southern California for a rebuild that cost just $100 per shock, done to Alpina’s original specification. “And they guarantee them for life for as long as I own the car!”

That should be for a good long time. DiMauro is a die-hard E24 fan, and he’s worked hard to put the last word in 6 Series performance in his garage, then to restore it to perfection.

“I love my M6, but when I get in this it reminds me instantly of how superior it is,” he explains. “The handling, the power…it really is. I thought the M6 was stable, but this car is that much more stable, especially at high speeds. 130 feels like 80!”

More important than its performance, though, is the fact that DiMauro simply loves this car.

“It just brings a smile to your face when you see it in your driveway,” he says. “When I open the garage door, I just shake my head. I can’t believe I have this car. Alpina only made 313 B7s, of which just half are still on the road and accounted for. The rest are in scrapyards or were made into something else. There are only two of these in the U.S., and the other one is in Florida.”

It’s easy to see just how special the car is in the BMW pantheon, and how much it means to DiMauro to have it. As a contractor, DiMauro saw his business implode with the U.S. economy when the real estate market tanked. Along with his family, the Alpina was one of the few things that brought him real joy in the midst of a perilous situation, and it’s no wonder that his enthusiasm for this magnificent car runs so deep.

“After all I’ve been through in the last five years, I’m holding onto this.” 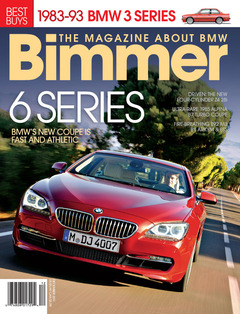