Making up for the missing M Car

With styling and performance modifications from 3D, one Z4 enters M Roadster territory. 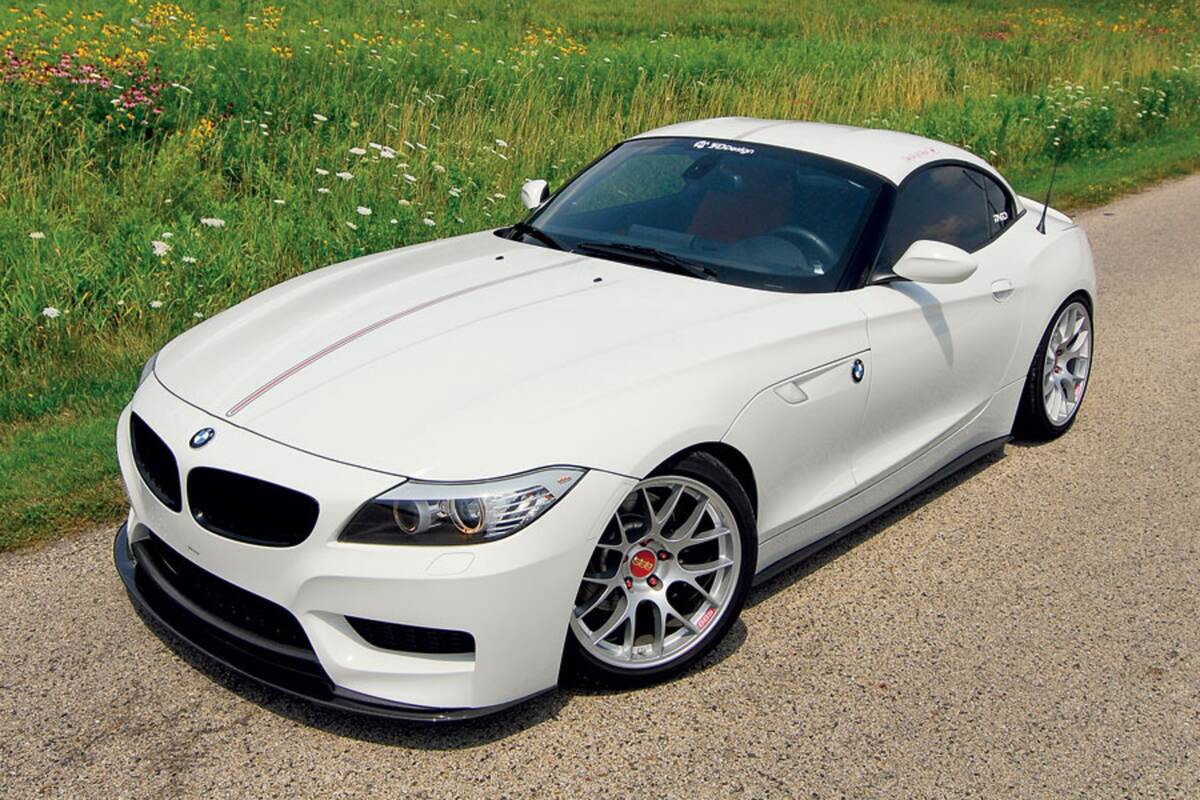 It’s really too bad that BMW has no plans to build an M version of the current E89 Z4 roadster. An M version topped the model lineup of the first-generation E85 Z4 and the Z3 before it, and both cars were nothing if not entertaining. There’s nothing quite like a roadster with a rip-roaring engine under the hood, but as fast as the current Z4 35is may be it doesn’t quite reach M territory.

To bridge the gap, 3D Design North America has built a Z4 35is that offers M-class speed along with some unique features that recall the classic roadsters of decades past.

Established in Japan in 1998, 3D Design built a strong brand in its home country before starting to sell its products in the U.S. a few years ago through WSTO Wheels. WSTO and 3D Design NA now work out of the same shop in Palatine, Illinois, which they share with IND, the North American distributor for Eisenmann exhausts. Though WSTO and IND are separate companies, they have a strong partnership and work together on projects, as evidenced by the tuned BMWs I see when I visit the facility in Palatine. 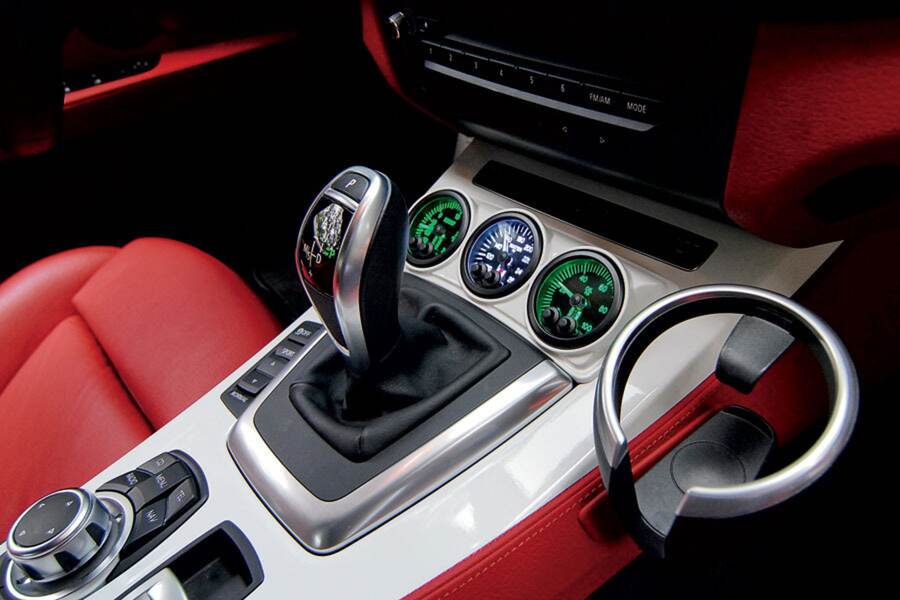 3D Design focuses on the design and manufacture of aerodynamic and body components, letting the other partners handle the performance tuning. 3D’s body pieces are manufactured by the company’s partners in Japan using tooling developed by 3D to its own quality standards and fitment requirements; the company produces parts for all current BMW and MINI Cooper S models as well as previous-generation E46 3 Series and E60 5 Series cars. These include front and rear spoilers, rear diffusers and side skirts, most in carbon fiber. 3D also makes its own floor mats and aluminum pedal sets and works with Stack to design additional gauges for the cockpit.

Carbon fiber and retro design elements spice up the look

3D Design North America’s wholesale manager Ilia Smolov told us that 3D started this particular project on the basis of the already potent Z4 sDrive 35is, which the company intended to make more visually exciting without departing too much from BMW’s in-house style. At first glance, the 3D Design car struck us as the most stunning Z4 we’ve ever seen, so clearly they nailed that aspect. 3D also wanted to give the car more of a classic roadster feel, but finding the details that recall the classic roadsters of an earlier era would take a closer look. 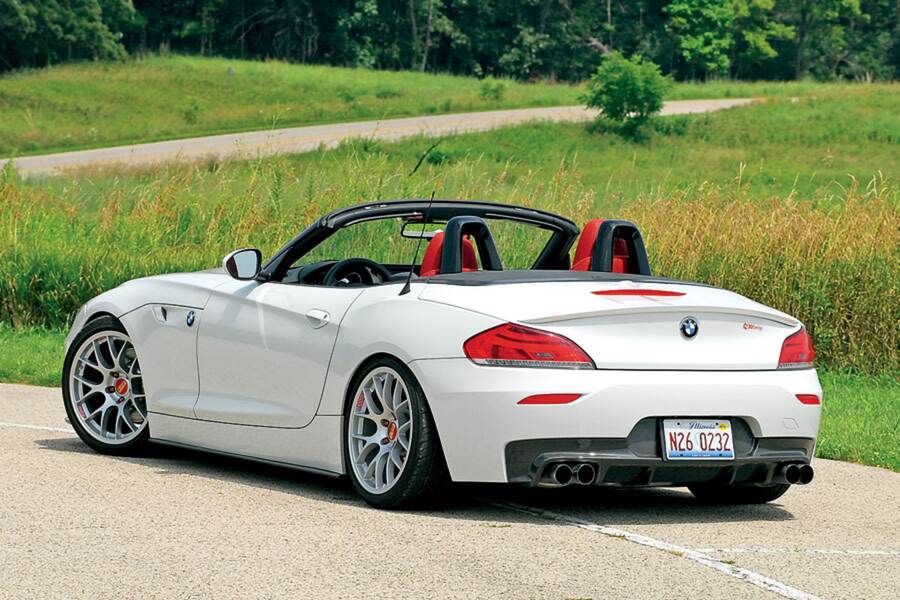 As your eyes fall on the 3D Z4, they are drawn first to the significantly lowered stance and BBS wheels. Smolov wouldn’t tell us how much this Z4 has been lowered, but he does say that 3D had a specific ride height in mind when the project began. The company also wanted to use BBS’ forged aluminum GT4 RE race wheels, which are the same wheels used on BMW Motorsport’s M3 GT4 race car. On the 3D Z4, they measure 9.5 × 18 in front and 10.0 × 18 in the rear, with 25mm and 30mm offsets. That’s a big jump from the stock widths of 8.0 inches front, 8.5 inches rear, and it took some finagling to make them fit on the lowered roadster.

“The 9.5-inch front wheels are a very tough wheel size to fit on the E89 Z4,” says Smolov. “We had to use Dinan camber plates from an M3, which we retrofitted on top of the standard strut hats. It also took some negative camber (around 2.8 degrees) to get them to fit.”

The rear was a little easier, but even there the wheels required around 2.6 degrees of negative camber for fitment. 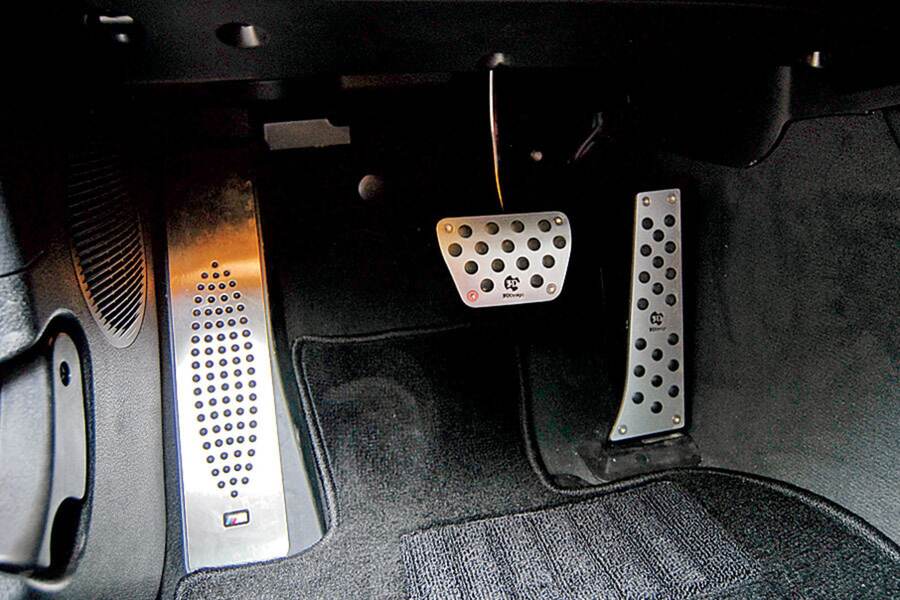 After addressing the ride height and wheel issues, 3D worked to correct what the company felt (and we agree) was too-soft handling for enthusiast drivers. 3D chose KW’s Variant 3 coilover suspension, which provides adjustable rebound and compression damping along with stiffer (and ride-height adjustable) springs that reduce body roll, brake dive and chassis squat under hard acceleration. Smolov said that 3D likes the damping characteristics of the KW system but also chose the dampers for reliability, as they fit well, resist corrosion and have a lifetime warranty.

The fit and finish on all the body pieces is first-rate, and they look as if they came directly from the BMW factory. 3D didn’t supply any performance data as to whether its spoilers, skirts and diffuser reduce lift, but given their design we expect they do to at least some degree, especially the front spoiler. 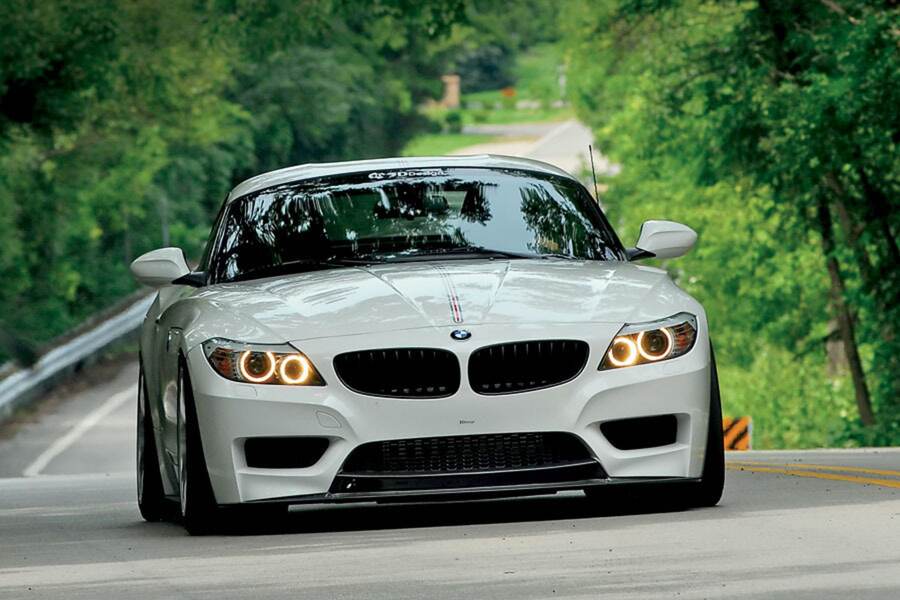 As cool as this car looks at a glance, the details are what really make it distinctive. It’s rare to see hand-painted pinstriping on any newer car these days—vinyl has largely replaced paint in that regard—but the 3D Z4 wears beautifully done pinstriping that was labored over for hours by a real artist with a brush. It adds a uniquely human aspect to the car, along with a bit of a retro look. (It really is retro, as most of the really good pinstripers are getting older.)

The roof above the driver’s door bears the painted message, “Don’t Give Up, Tohoku.” Tohoku, Japan was especially hard-hit by the 2011 tsunami, and the words were the tag line for a fundraiser to help the town’s tsunami victims. The cockpit trim has also been painted to match the body color; this work was done in Palatine by IND, and it looks fantastic as an accent to the stock red leather seats and trim. Also added to the cockpit is a set of Stack gauges for turbo boost, water temperature and oil pressure. 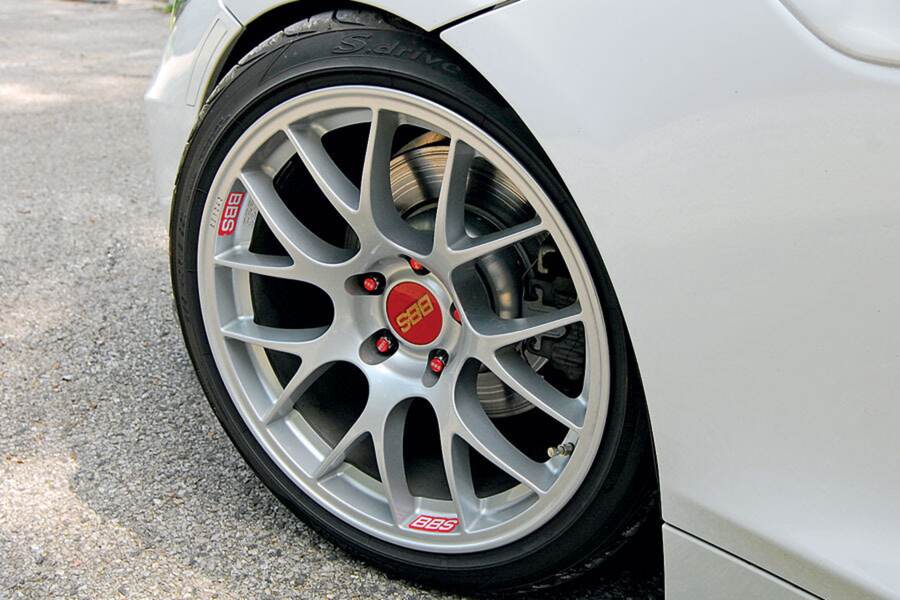 To give the Z4 performance that would match its newly aggressive appearance, 3D Design worked with Eisenmann and ESS Tuning to give horsepower a meaningful boost. The Eisenmann exhaust runs from the downpipe back and produces what Eisenmann claims is a 35% increase in flow over the stock pipes, which results in a gain of around 12 hp. With its quad tips, the exhaust also makes this Z4 look even more like the E89 M Roadster that BMW never built, especially in combination with the 3D carbon fiber rear diffuser. It also sounds pretty incredible at just about any engine speed from idle to redline, though even some of the most enthusiastic drivers might find it too loud for a daily driver.

The ESS Tuning upgrade is a Stage 2 ECU reflash that combines with the Eisenmann exhaust to raise the power level of the Z4 sDrive35is’ N54 turbocharged six-cylinder by around 70-80 hp. BMW claims 335 hp at the crankshaft; ESS claims 400 hp with its ECU reflash alone, before the installation of the exhaust.

Our quest to see if the 3D Design Z4 performs as well as it looks was somewhat limited by the fact that we spent only a few hours driving the car and couldn’t find any really good sports car roads within driving distance of the 3D shop. Heading north toward Wisconsin, we realized pretty quickly that we wouldn’t want to use this Z4 as a daily driver on the potholed and pitted roads of suburban Chicago; with its low ride height and stiff suspension, the car wasn’t exactly “shake your fillings loose” firm, but it would probably get tiresome on a daily commute over roads like this. 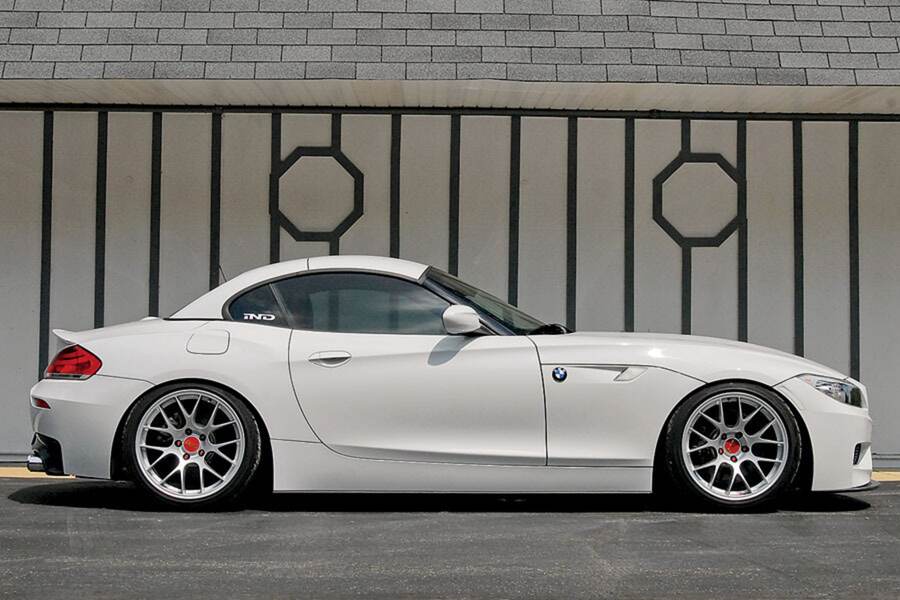 Of course, 3D didn’t build this car as a daily driver, and as low as this car sits we experienced no rubbing of the wide 18-inch tires over even the roughest bumps. When we did find a smooth stretch of road with some curves, the car handled very well, with sharp directional changes, minimal body roll or brake dive and a lot of grip from the Yokohama S.Drive tires. It left us wishing we could spend a few hours with this car on a smooth race track.

There are a lot of straight roads around Palatine, so we risked a ticket to get an idea of how the ESS tune and Eisenmann exhaust improve the acceleration of the Z4 sDrive35is. To sum it up: This car is wicked fast! When you nail the throttle, the accelerative force pins you back into the seat, with the sound and fury from the Eisenmann exhaust adding to the experience. We didn’t do any scientific testing, but from the seat of the pants this car feels faster than either the M3 or the 1 Series M Coupe (which shares its turbocharged six-cylinder engine with the Z4 35is). The modified mill provides more mid-range grunt and more power on tap above 5,000 rpm. It also displays a significant improvement in throttle response, here sharper and more immediate with even less lag than the stock car (which is already quite good). The shifting experience with the Dual-Clutch Transmission was improved, too, as the shifts were much more audible with the Eisenmann exhaust out back. 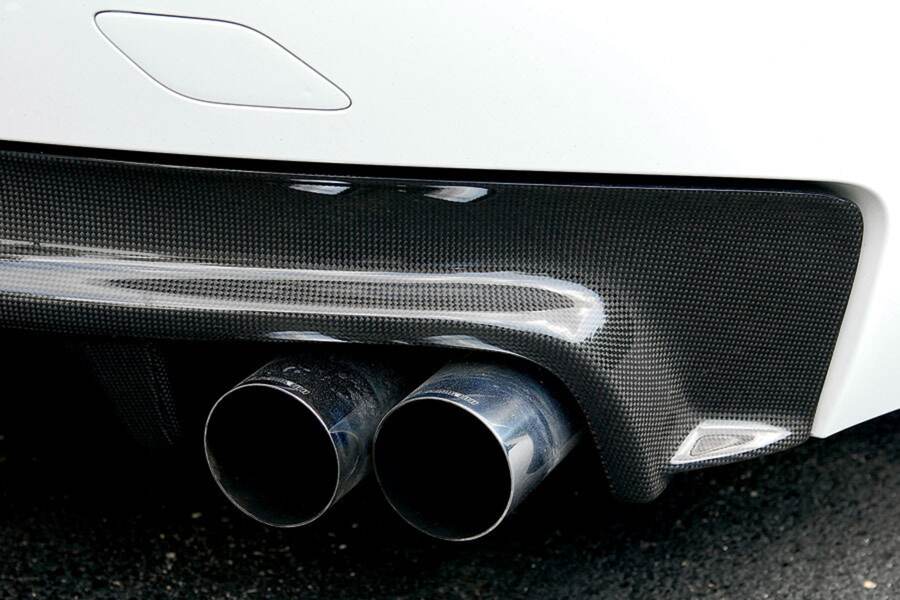 Overall, we really like what 3D Design has done with the Z4. It’s a great looking car right out of the box, and 3D’s modifications have made it appear much more aggressive while accentuating the stock design elements. We were also impressed with the build quality, as well as the fit and finish of the body components.

With ESS’ ECU tuning and the Eisenmann exhaust, 3D has also managed to change the character of the car, transforming the Z4 from boulevard cruiser to pure sports car. The 3D Z4 easily fills the void left when BMW decided not build an M version of the Z4, and 3D Design isn’t done yet. The company plans to add Brembo brakes and an ESS Tuning turbo upgrade in the near future, which should allow this Z4 to not merely meet but actually exceed the kind of performance we’d expect from an M Roadster. 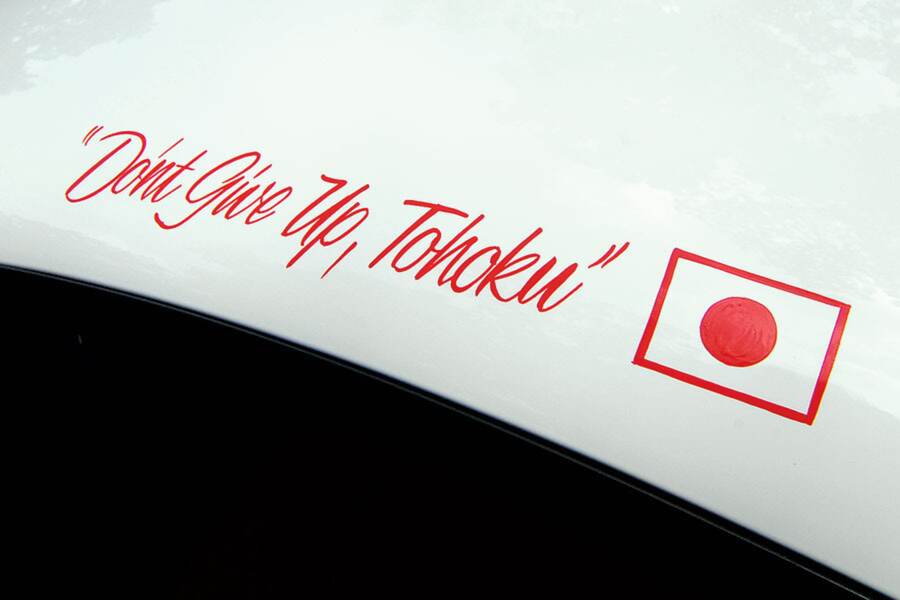 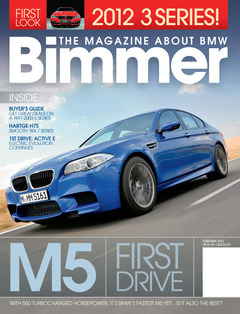