Starting with a mild-mannered 1600, David Ullom created a flared-fender hot rod with 205 horsepower and a raucous personality to match. 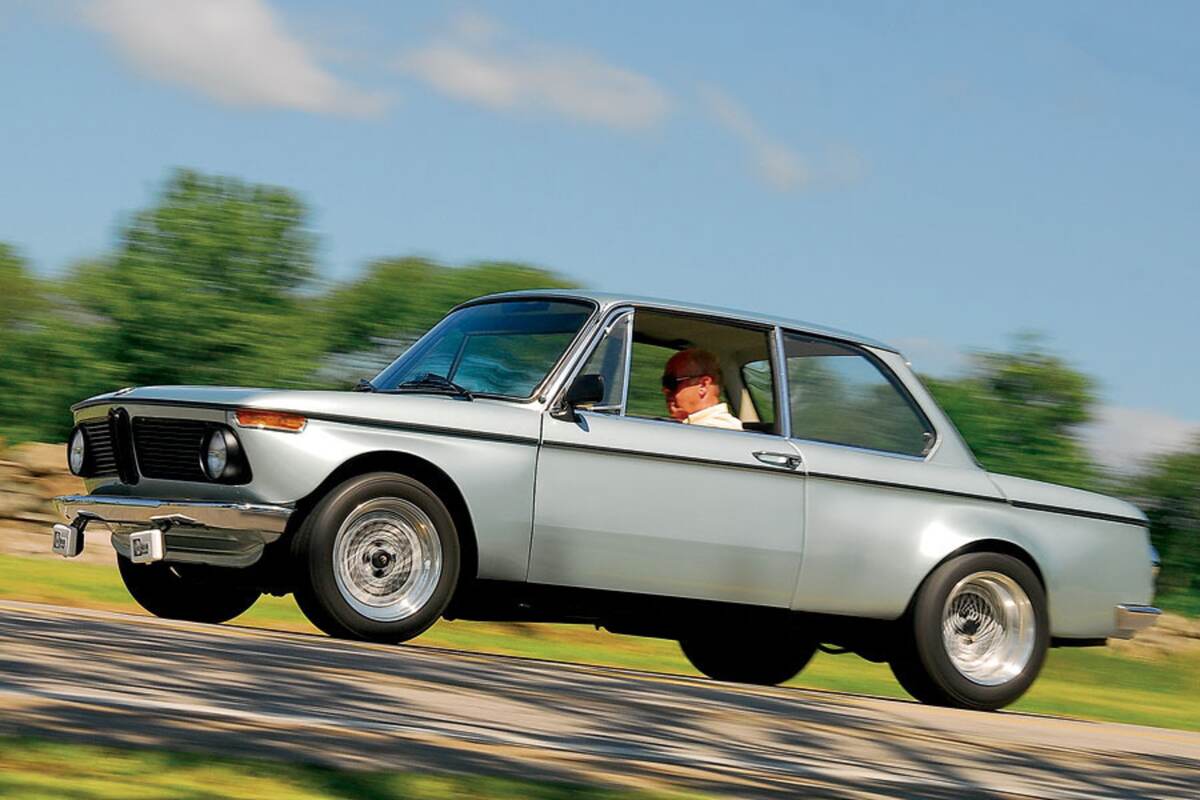 When the BMW 1600 was introduced in 1967, Car and Driver proclaimed it “the best small car we have ever driven.” Britain’s Autocar described its handling as “exceptional,” just like its build quality.

Barely a year later, however, the 1600 was all but forgotten in the wake of the car that followed it: the 2002 that became a legend almost the moment it hit the streets.

David Ullom knew all about the 1600’s horsepower shortage when he bought one in 1972, but it mattered far less than the car’s virtues.

“The 1600 had a good suspension design, and it was a great handling car with a lot of visibility,” recalls Ullom. “It has the aerodynamics of a barn door, but there aren’t too many places where you can run it over 120-130 mph anyway. It was a little underpowered, but that could be cured.” 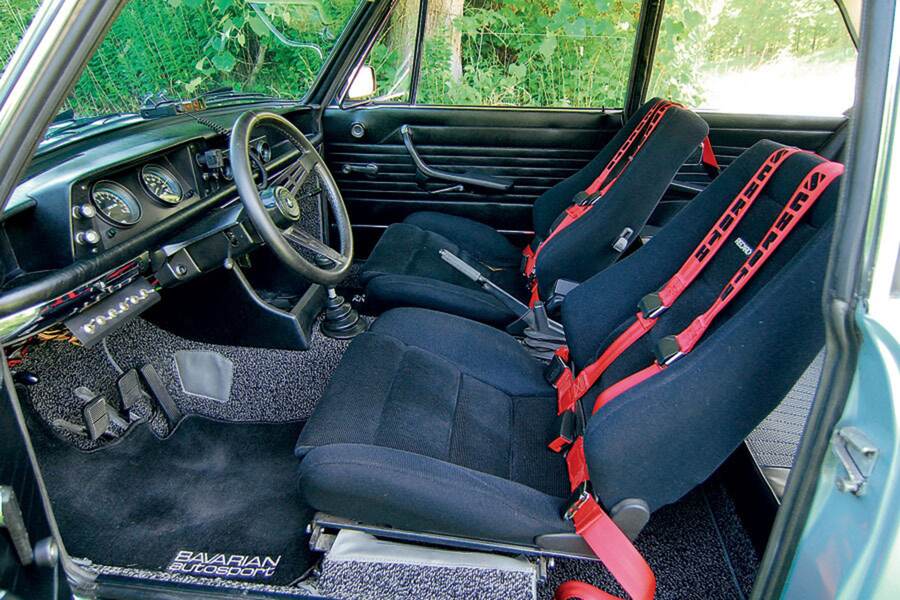 As someone who’d been hot-rodding cars since age 16, when he modified a 1938 Ford coupe with a small-block Chevy engine, Ullom knew just what to do when a ratty 1600 rolled into his brother Ed’s Cumberland Valley Motors BMW dealership in Mechanicsburg, Pennsylvania. [Ed Ullom has since sold the BMW franchise to Sun Valley Motors, and Cumberland continues as a Volkswagen/Dodge/Subaru dealership.—Ed.]

“It was taken as a trade-in,” he says. “An older lady had owned it, and she didn’t use it as a typical BMW owner would. Instead, she kind of used it as you would a pickup truck. She hauled a lot of junk around in it, and the seats were all scratched up. My brother was going to convert it into a race car, but I talked him into letting me buy it instead. I’ve been playing with that car in one way or another since 1972.”

He started by replacing the ruined interior with pieces from a wrecked 2002, then got to work on the car’s performance and handling. The project would take decades, and it ended with what is basically a race car—ironically, his brother’s intention for the car back in 1972.

Race car parts under the hood

As it is on any true hot rod, the engine is the centerpiece of Ullom’s 1600, and it’s more like a race engine than anything built for the street. With the goal of improving output from 85 to 205 horsepower, Ullom enlisted the services of Goddard Engineering in Providence, Rhode Island, which built the motor with consultation and some parts from BMW guru Ray Korman. 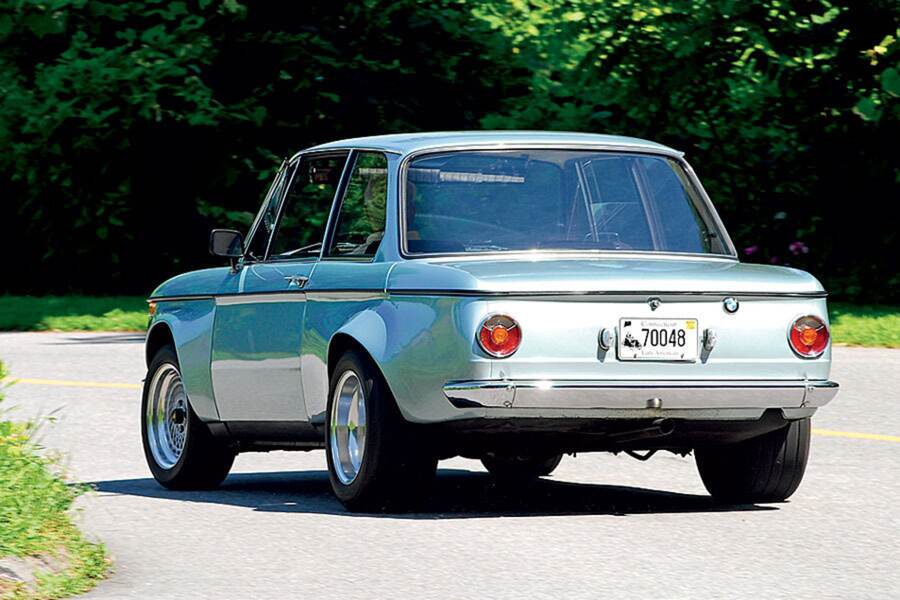 The blueprinted and balanced engine is based on a 2.0-liter M10 block sourced from an E21 3 Series. (Since the M10 four-cylinder was used by BMW from 1961 to 1987, it’s possible to mix and match components from a wide range of fitments.) The crankshaft and its Carillo connecting rods, which attach with robust SPS bolts, have been shot-peened for additional strength, and the rods are topped by K&S forged racing pistons.

The block was fitted with an Alpina head whose intake passages were bored and polished and whose valves—sodium-filled on the exhaust side—were polished and tuliped. The cylinder head also uses a Schrick 324-degree camshaft, Korman racing rocker arms and Isky valve springs with titanium retainers.

The engine receives fuel through dual Weber 45 DCOE carbs with gold-plated velocity stacks, K&N filters and a high-capacity fuel pump. Ullom calls the Webers “a royal pain in the ass,” but he’s learned to tune these finicky carbs over many years, getting the air-fuel mixture just right after much experimentation. Spark is provided by a European-spec 2002tii distributor with an MSD electronic ignition and Jacobs Electronics coil and plug wires. The engine exhales spent gases through Supersprint nickel cadmium headers attached to stainless steel exhaust pipes and a Borla muffler.

The operating fluids remain cool thanks to a larger BMW tropical core radiator and a 5.0-liter Alpina oil pan that incorporates windage trays and baffles for better oil delivery. Windage trays improve engine lubrication by controlling the oil that can be caught in the vortex of swirling air created by crankshaft rotation, which they capture and drain back into the oil pan. A trio of Stewart Warner gauges in the cockpit allow Ullom to keep track of the engine’s vital signs for oil pressure, oil temperature and water temperature.

The engine is mated to a Metric Mechanic five-speed close-ratio transmission with a short-shift kit and a 228mm racing clutch from a European-spec 2002tii. The differential retains the stock 2002 housing upgraded with 3:90 gearing and more robust output shafts. 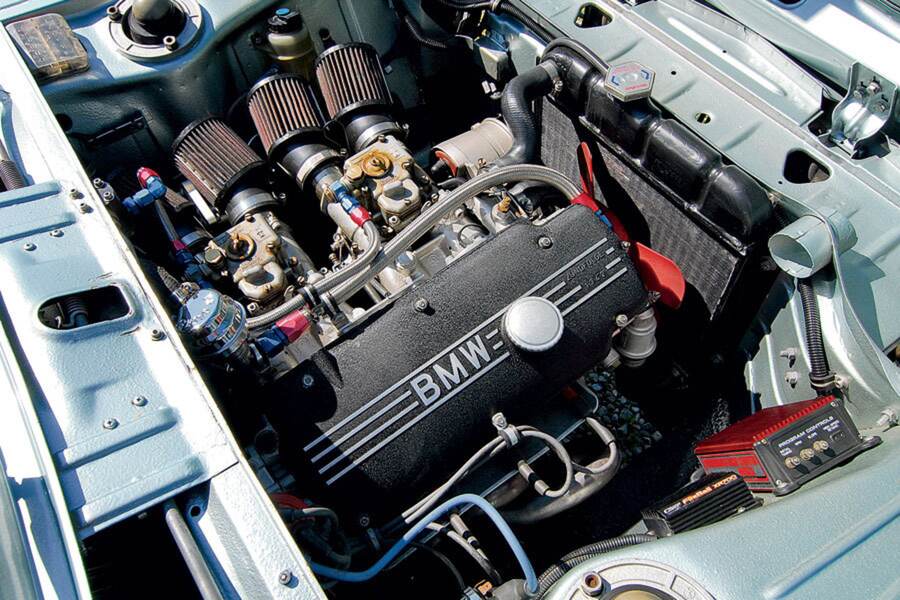 Ullom was already a fan of the 1600’s suspension when he bought the car, and he’s taken a fairly conservative approach to handling improvements. The car rides on stock springs cut by Metric Mechanic to lower the car by 1.5 inches—a service the company no longer provides since shifting its concentration to engines and other drivetrain parts—with damping provided by Bilstein racing struts and shocks.

Body movement is further controlled via Metric Mechanic’s Maximum Stick anti-roll bars, ingenious devices designed to fit around the 2002’s air conditioning compressor pulley, oil pan and drain plug, something that most aftermarket anti-roll bars didn’t do without modification. The front bar measures 27mm in diameter, much larger than the 16mm stock bar as well as the 19mm rear bars that were common from other aftermarket sources. The rear bar measures 19mm, an improvement over the 15mm rear bar that may or may not have been on this car as delivered from the factory; some had it, others didn’t.

Brakes were upgraded with Metric Mechanic’s “Rally” brakes, another discontinued item that upgraded not just the rotors but the entire braking system. The stock master cylinder’s 20mm bore was increased to 23mm, the wheel cylinders’ diameter from 15mm to 19mm. Up front, the stock 240mm rotors were replaced by 255mm vented rotors clamped by four-piston calipers whose piston diameter increased from 32mm to 39mm, and whose brake pad swept area thereby improved by 73.5 sq cm, from 114.7 to 188.2 sq cm. The 1600’s drum brakes were retained at the rear, but Metric Mechanic replaced the stock 230mm drums with 250mm parts. 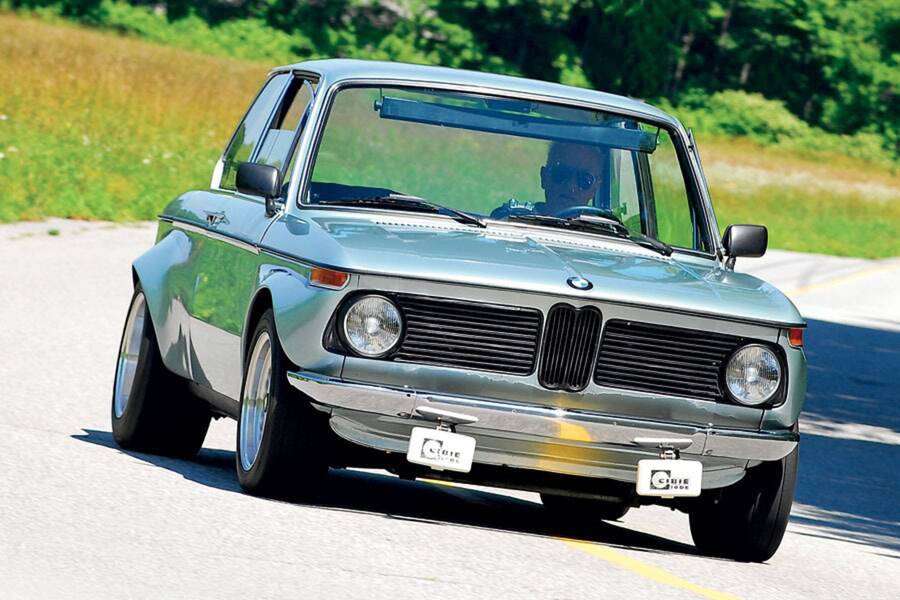 “I could put four-wheel disc brakes on it, but I don’t think I need them,” Ullom says.

Right where he wants it

Even without a disc brake conversion at the rear, Ullom’s car incorporates a long list of modifications, and arriving at the car’s final form has taken a lot of time and experimentation.

“The biggest challenge with getting the car to where it is now was just getting to the right combination of parts, with the engine, suspension and brakes,” Ullom says. “There was some trial and error along the way, but it’s where I want it to be right now.”

Visually speaking, where it is right now is spectacular. As impressive as its underbody mods are, the exterior is what really makes this 1600 stand out. Its flared fiberglass fenders are more dramatic than even those used by Alpina on its 1600ti race cars of the 1960s, and they were installed for a similar purpose. 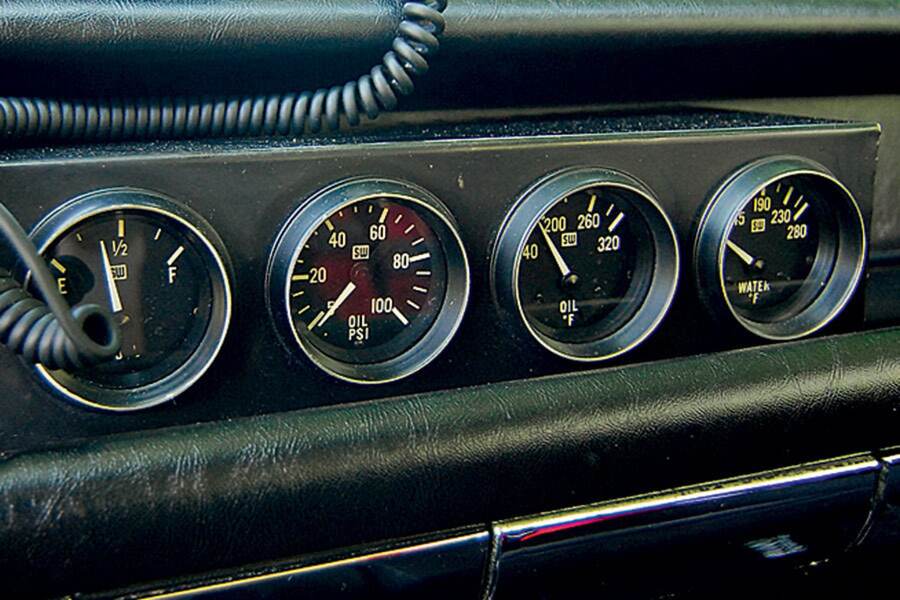 “I had a guy up here in New England who was a former body man for Carroll Shelby when he was racing in the mid-1960s, and I talked to him about flaring the fenders so I could put meatier tires on it,” recalls Ullom. “The guy was a genius. He made the fenders from scratch, by just drawing out his own template for them.”

Once the bodywork was complete, Ullom had it sprayed in Glacier Green metallic, a BMW color used on the 1999 5 Series. It’s the third color the car has worn since 1967, having originally been Sahara Beige and later pearl white. Ullom didn’t like Sahara and found the pearl white difficult to keep clean, prompting him to choose Glacier Green after seeing that color on the 5 Series.

Although we could spend hours admiring the car’s seductive form and glossy paint, we’re eager to plunk down into its hip-hugging Recaro seats and tighten the Schroth racing harness for a drive.

Starting the 2.0-liter four unleashes a fantastic sound, a barking exhaust note that hints at the power under the hood. To access the power, however, the engine needs to be revved…high!

“Between the duration on the cams and the Weber 45s, it’s getting a lot of gas at low rpm,” Ullom explains. “You have to keep it above 3,000 rpm pretty much all the time.” 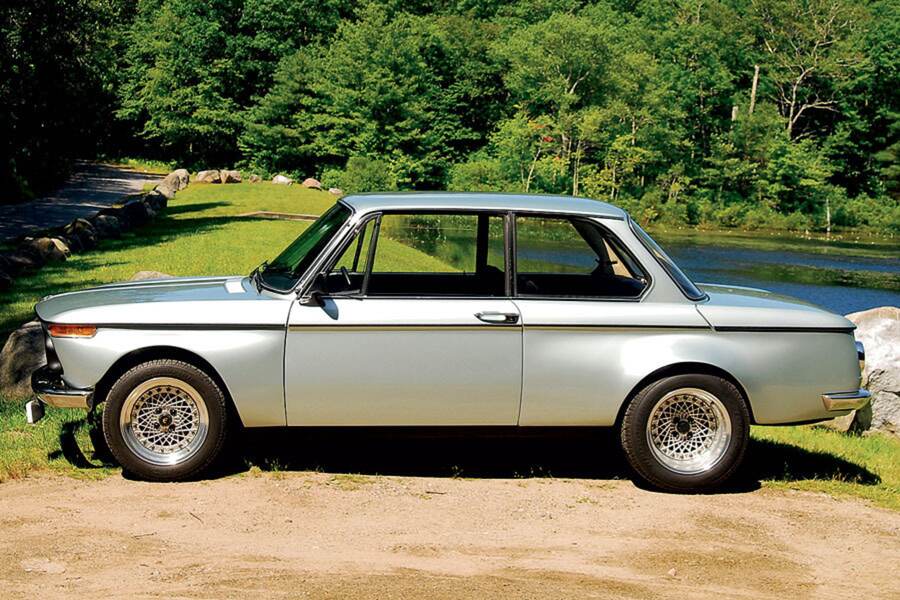 Indeed you do, but once the engine clears its throat and really starts to run, it sends the car howling down the road at a rapid rate of speed. Its raw, high-strung nature makes this 1600 feel very much like a vintage race car from behind the wheel, and it reminds us of the BMW NA 2002ti race car we drove briefly back in 2010. (“Charisma and Character, Bimmer #95). That car had a bit more power, but it was a pure race car that would be neither legal nor drivable on the street. Ullom’s car is still both…barely.

“I have as much crammed into it as you can probably do with a streetable motor,” he laughs.

With 205 hp in a 2,000-lb. package, Ullom’s 1600 has a power-to-weight ratio that’s almost identical to that of today’s 1 Series M Coupe, though it feels a lot more extreme. This hard-edged, raucous car would be totally unsuited to long journeys or casual trips to the grocery store, and it takes serious effort to drive thanks to its relatively unassisted brakes and steering. The effort is rewarded with serious speed and significant competence in the turns, its body roll greatly reduced from that of a stock BMW from the 1960s Neue Klasse.

Ullom had conceived this car as a sleeper, and at that the car succeeds even though its exhaust note and flared fenders would seem to give the game away. 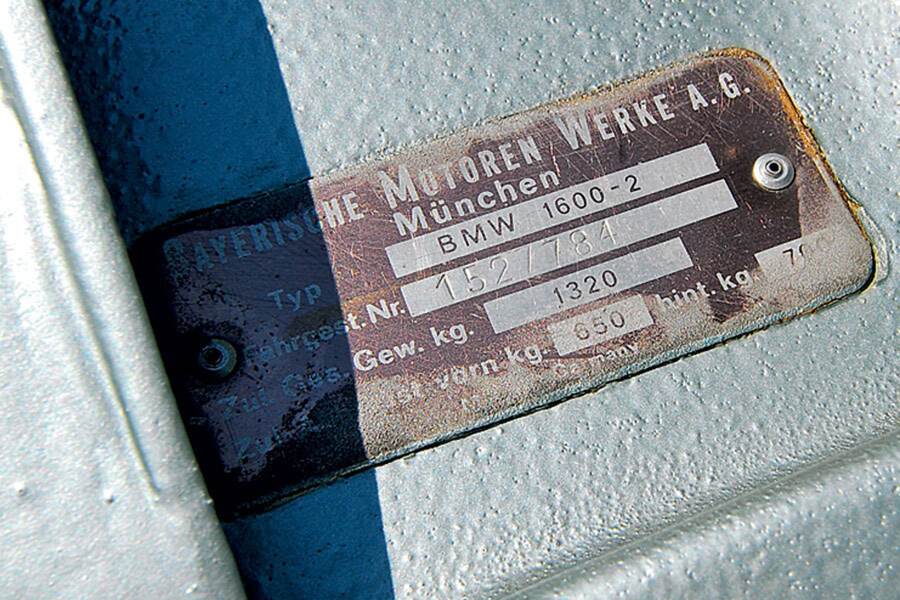 “The most fun I have with it is playing with people at stop lights,” says Ullom. “People think it’s a cute little old car, but then I blast away when the light turns green!”

It’s not only a sleeper, it’s a keeper, too, having outlasted a pair of CS coupes in Ullom’s garage as well as an E12 5 Series. He pared his collection when he moved from Rhode Island to Connecticut in 2006, keeping the 1600, an all-original 1985 635CSi and an AC Cobra replica whose 500-plus horsepower Ullom enjoys on cruise nights.

Like the Cobra, the 1600 is mainly a fair-weather machine, though Ullom takes it onto the road at least once every ten days to keep everything working well. When the weather is nice, he says, he’ll often drive it for three or four days in a row, reveling in its power and sound.

There’s something very cool about finding a car you love, modifying it to make it unique and keeping it in your garage for decades. That’s exactly what David Ullom has done with this 1600, and he sees no reason to sell it after nearly 40 years. Instead, he plans to keep it in the family, maybe even pass it down to his oldest son.

What a cool inheritance that would be! 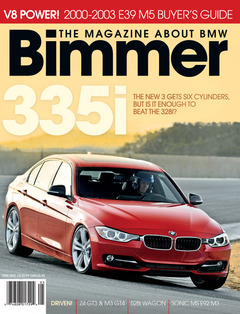