How good is the 1 M Coupe, really? To find out, we take one to Monticello Motor Club and put pro driver Nick Longhi behind the wheel. 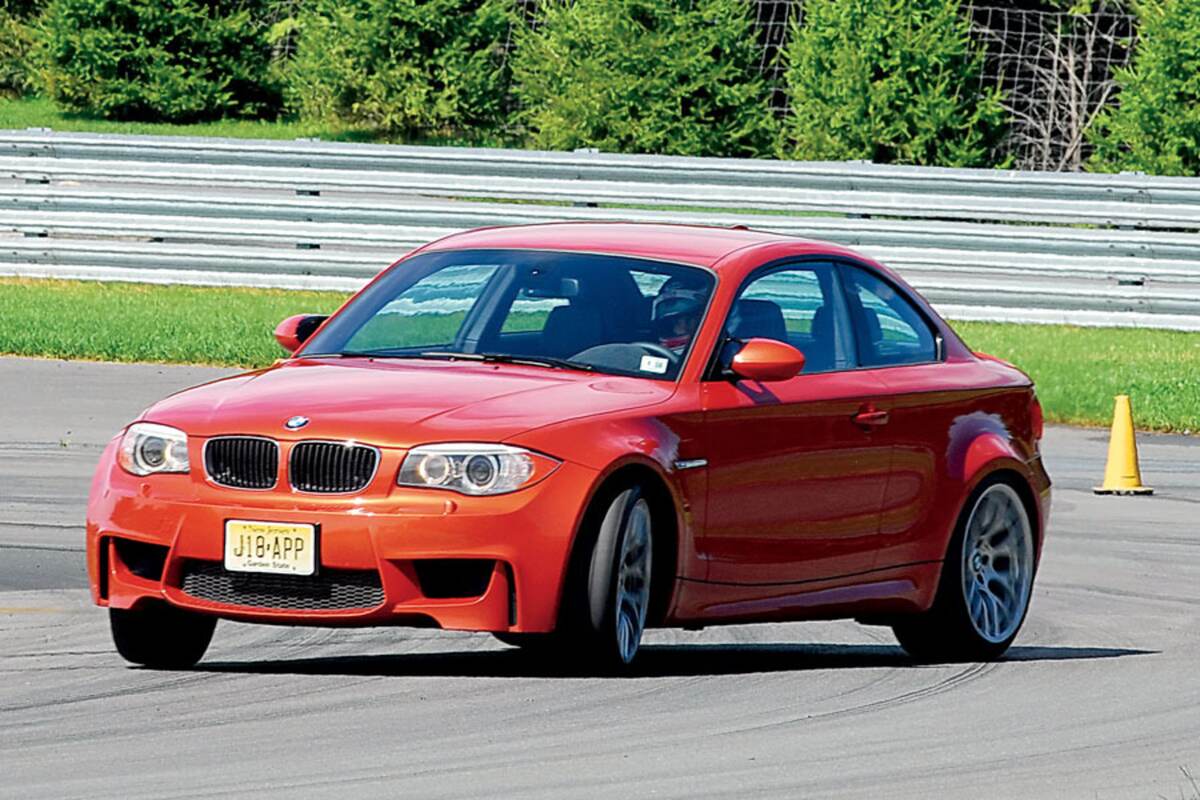 AS THE MOST ENTHUSIAST-ORIENTED BMW SINCE THE E92 M3, the 1 M Coupe has been the subject of more track tests than any other car in the lineup. BMW NA launched the car at Willow Springs, and plenty of journalists —including a few of us here at Bimmer—have taken it to tracks around the country for high-quality, high-speed seat time.

For this track test, we wanted to do something different, so we called up professional race car driver Nick Longhi and asked him to drive the 1 M Coupe and give his impressions.

Longhi currently races the Rum Bum Racing M3 with co-driver Matt Plumb in the Grand-Am Continental Tire Sports Car Challenge’s GS class, but he’s competed in everything from formula cars to vintage Ferraris. No matter what he’s driving, Longhi is well respected not only for his speed but also for his ability to set up a car for optimum performance.

“Nick is on the top of the list of drivers who are very fast and can also give direct and concise feedback on the car,” says Plumb. “He has a ‘seat of the pants’ feel that allows him to diagnose issues quickly, which is essential in our sport where time on track is limited.”

Longhi put that skill to work to finish fifth with Plumb in the BMW Performance 200 at Daytona this year, and to qualify the Rum Bum M3 on pole three times in 2011, when he and Plumb drove the car to five podium finishes including wins at Daytona, Lime Rock and Mid-Ohio—results that were instrumental in winning the second GS-class manufacturer’s championship in a row for BMW. Who better, then, to assess the 1 M Coupe’s prowess on the race track? 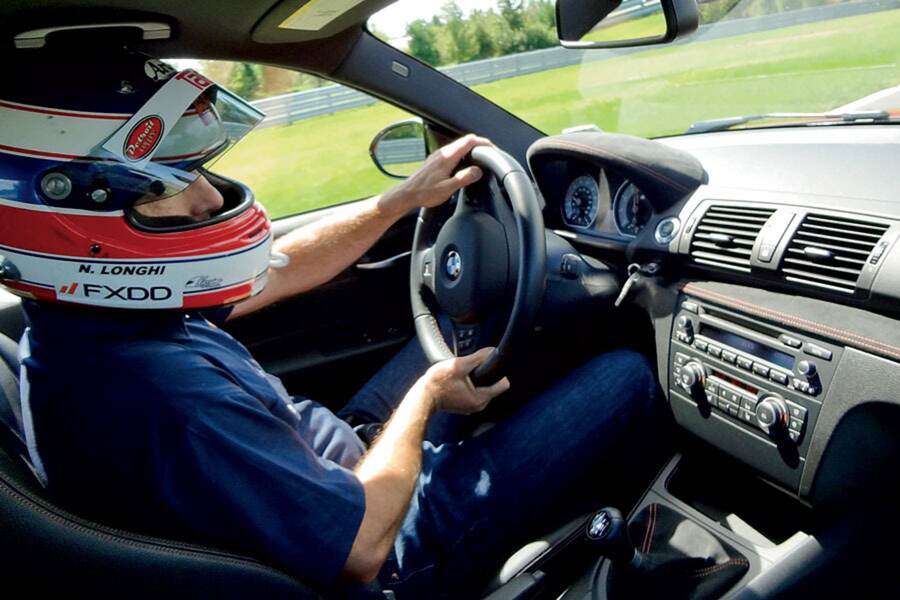 We invited Longhi to join us in the 1 M Coupe at Monticello Motor Club (MMC), a private motorsport club in Monticello, New York. The circuit has a little bit of everything: low- and high-speed corners, long straights and plenty of elevation changes. It’s a great place to assess a car, and many pro racing teams test here, including Turner Motorsport and Dyson Racing.

By the time I got to MMC, I’d already been driving the 1 M Coupe for a few days and liked it a great deal, as I have all E82 1 Series coupes. By borrowing much of its chassis hardware from the M3, the 1 M takes both performance and driver engagement to another level altogether compared to the 128i or 135i—at least for those of us with the skills of mere mortals. Pro drivers of Longhi’s caliber operate on a much higher level when it comes to pushing a car to its limits, however. And beyond their sheer speed, they can discern a car’s characteristics more acutely, finding strengths and weaknesses that might elude less sensitive or less skilled drivers.

With that in mind, we knew the 1 M had made a good impression when the first words out of Longhi’s mouth were, “It’s cool as hell!”

“The car is an amazing amount of fun,” Longhi continued. “It feels like what most cars don’t feel like. Overall, the cars that people now call sports cars tend to be more like touring cars, but the 1 M feels like a true sports car. 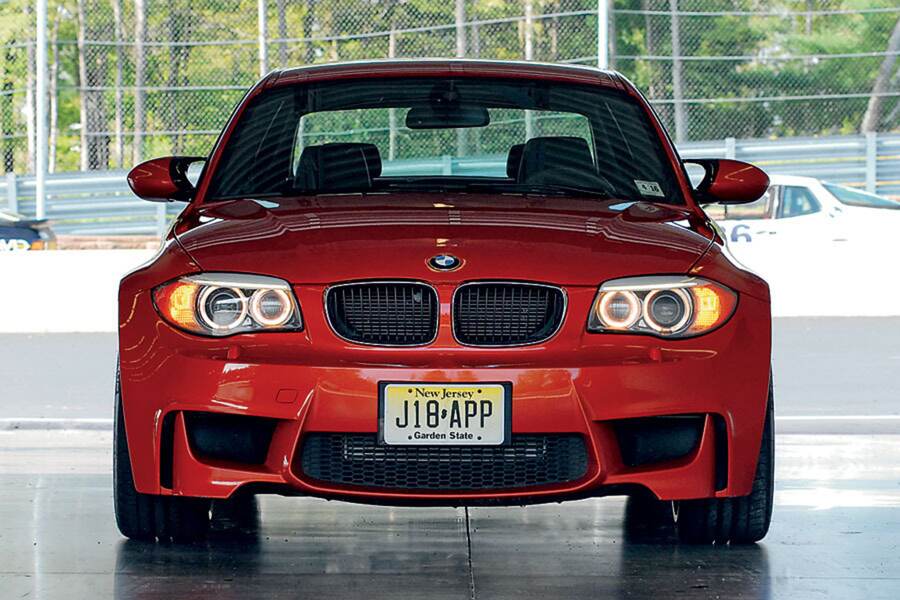 Longhi’s enthusiasm for the 1 M failed to diminish after several more laps, even after the brakes started getting hotter and the tires started losing grip. When they did, it was a thing of beauty to watch Longhi arcing the 1 M through MMC’s turn five in perfectly controlled slides.

“With the shorter wheelbase [104.7 inches vs. the M3’s 108.7—Ed.], the 1 M changes direction really nicely—it just wants to turn,” he comments. “Most road cars available today understeer first, but the 1 M transitions into a neutral overall balance more than any other BMW I’ve driven. As it settles into a corner, you get a bit of initial understeer but it will pivot around and then really turns in nicely.”

That’s especially important at Monticello, which is defined by a number of highly technical corners that require a car—and its driver—to have deft reflexes and ample agility. The chicane at the end of the back straight, Longhi said, presented a particular challenge.

“With most cars, you have to be really careful about waiting for the car to move one way and then transfer weight to the other direction, but you can just flick this car right through there and it feels great,” he said. 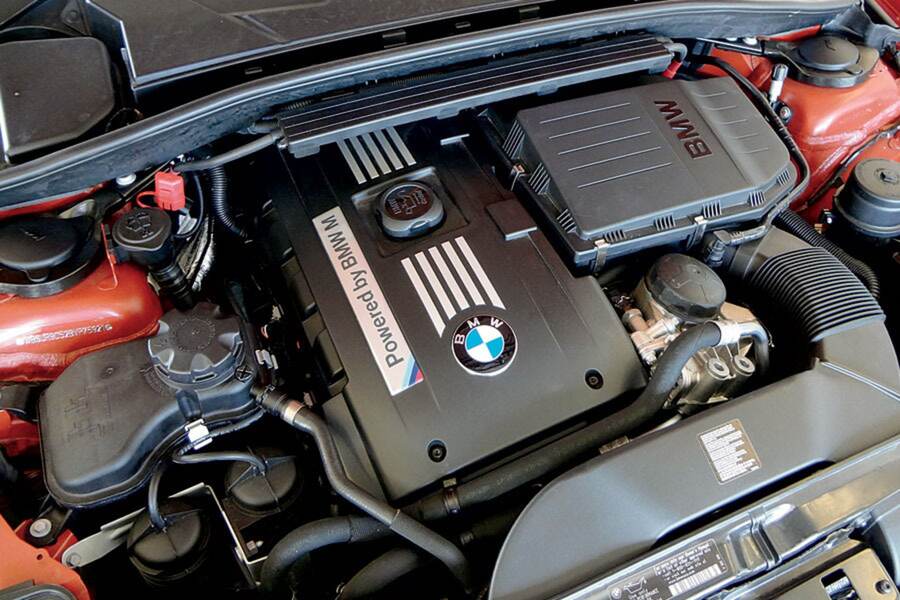 For a pro driver like Longhi, that’s certainly true. But what of those of us with lesser skill levels?

The 1 M’s willingness to change direction may make it a hoot to drive on track, but I still preferred the M3 as a track car even after several laps at MMC. While Longhi loved the 1 M’s agility and the ease with which it will spin its rear tires, I found myself longing for the added stability and progressive handling balance of the longer-wheelbase M3.

Longhi likes the M3, too—he races one for a living, after all—but to him the difference was more a matter of motor than of handling.

“The fantastic thing about the M3 is just the feel of the engine,” he says. “A four-liter V8 is just about the magic number, in my opinion, when it comes to engine size, and I love the way the M3 V8 spins and revs.” 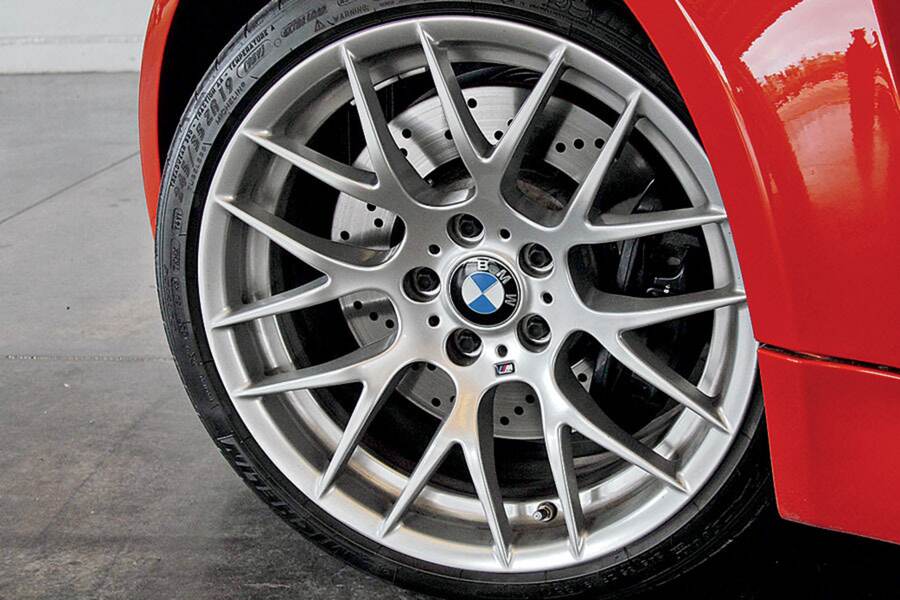 Where putting the power to the pavement is concerned, both cars employ the M Differential Lock, and both have M Dynamic Mode to keep things under control when even the M Diff Lock is overwhelmed.

“In MDM mode, I wouldn’t say it lets you slide the back end around, but it seems as if the electronic controls kick in a little later,” says Longhi. “Honestly, that’s fine, because if you’re really driving correctly you shouldn’t be sliding around much anyway. When you turn the traction control off completely, it’s still very predictable.”

True, but you have to be on top of your game to catch the rear end when it does let go, which it wanted to do every time we exited the right-hand turn that leads onto MMC’s back straight. Once it was pointed in the right direction, however, it was capable of touching 140 mph before we had to brake hard and drop down a couple of gears for the chicane.

As Longhi mentioned, the 1 M did feel a lot more tossable through this section than the M3 thanks to its shorter wheelbase, but that in turn required extra precision on the part of the driver. The 1 M is far less forgiving than the M3 if the driver gets slightly off-line or misses a turn-in point or apex. 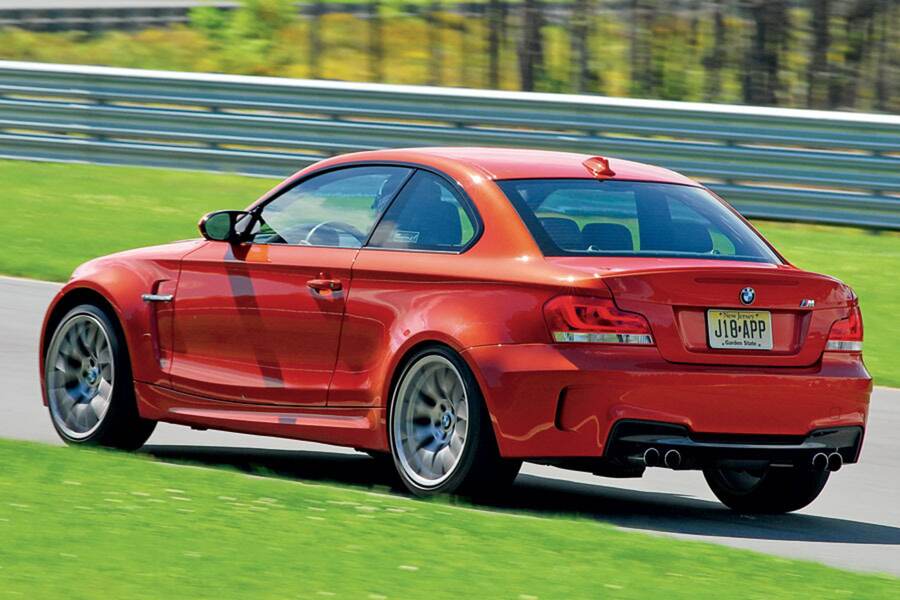 Longhi agrees, but with certain qualifications.

“It’s awesome, but the M3 also costs over $60,000,” he says. “The 1 M is around $20,000 less and it’s plenty fast and has more torque. It is a bit more manic than the M3, but for the majority of tracks in North America right now, where you have a lot of corners and back and forth transitions—Lime Rock Park, New Jersey Motorsports Park, Monticello Motor Club, Barber Motorsports Park and Mid-Ohio, to name a few—the 1 M is exactly what the doctor ordered.”

Suggested mods: not many

Judging by the number of 1 M Coupes we’ve seen at the track, many of these cars have ended up in the hands of enthusiasts who bought them for precisely that purpose. What would Longhi change to make the 1 M Coupe more suitable for track days while still keeping it roadworthy?

“If there is one thing I would do, it would be to get a set of adjustable shocks for it,” says Longhi. “I wouldn’t change the springs or the anti-roll bars in this car, but I’d like to be able to stiffen up the shocks for track driving, which would help to reduce some of the front-end dive under braking. The feel of the brakes is also good, but the brakes would be better with more track-oriented brake pads.”

Neither of those modifications would hinder the car’s drivability on the street, or the enjoyment that can be had at much lower speeds on public roads. As fun as the 1 M is at triple-digit speeds on a race track, it’s equally so doing 50 mph on a back road, and it will happily perform daily-driver duty, as well.

“You’re not driving on a track most of the time, and you’re not often going from zero to 60 mph as fast as you can,” says Longhi. “To me, it’s all about the feel of the car itself and the feel of the chassis, and in that respect the 1 M is great. It’s comfortable and quiet enough for daily driving, but it’s also fast and you can bring it to the race track and have a really good time with it. I think it’s a much better car than the Porsche Cayman R, which is kind of useless as a daily driver and can’t be much faster on the track than the 1 M.”

Given how good as the 1 M Coupe is—and how much it’s done to rebuild the M division’s reputation in the wake of the X5 and X6 M that alienated so many enthusiasts—it’s a shame that only about 2,700 were built, ensuring that very few BMW fans will ever get to experience it. Unless BMW plans to build more examples, we’d love to see the 1 M Coupe’s suspension components made available as an option in the 135i Coupe, perhaps as a BMW Performance upgrade.

We also hope that BMW understands how thoroughly this car has revitalized the company’s image as a builder of small, high-performance cars that are a blast to drive, and that BMW perpetuates the tradition of the 2002 tii and E30 M3 with another 1 M Coupe when the E82’s successor debuts in 2014.

“There’s nothing else out there that comes close to this car when it comes to refinement and performance at this price,” Longhi says. “I would love to take it home.” 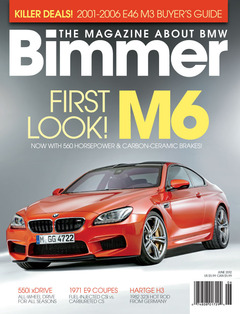