When Miguel Aponte-Rios bought a white E30 M3 race car, he saw it as a blank canvas just waiting to be turned into an original work of art for the track. 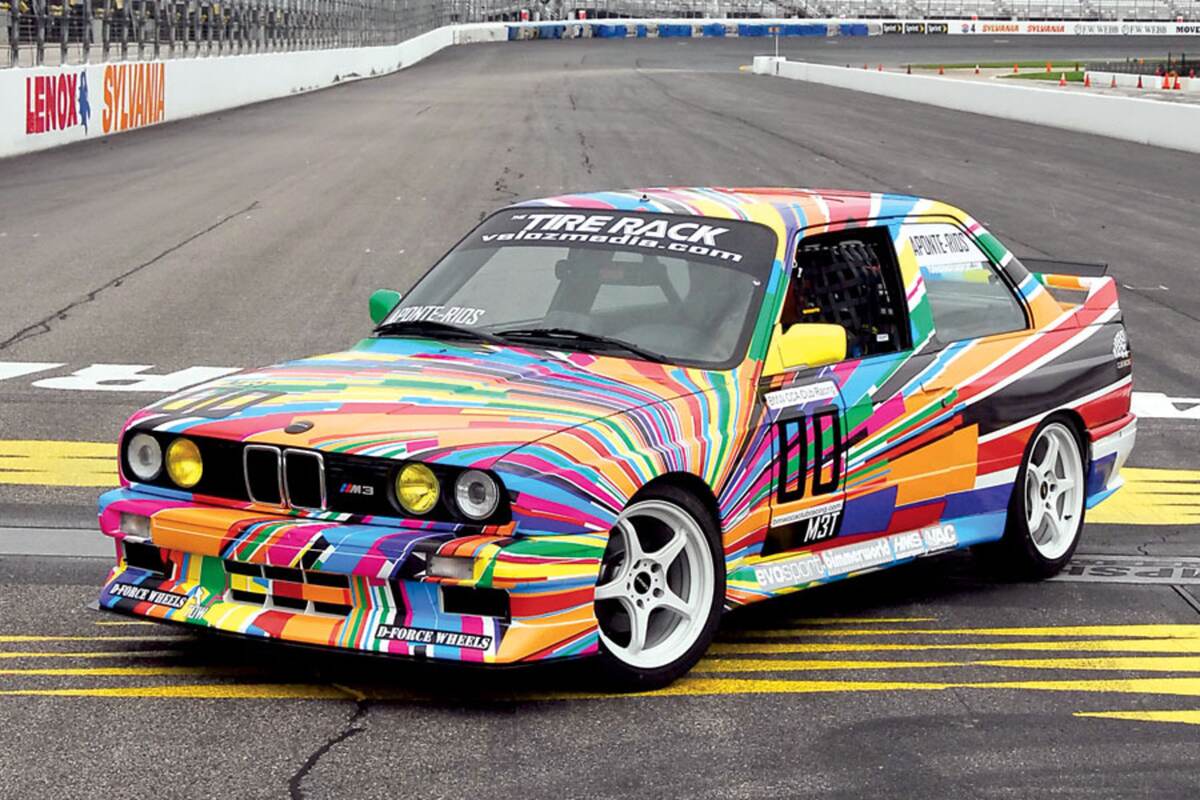 The notion of what constitutes art can vary widely, but most enthusiasts agree that BMW’s Art Cars are authentically both art and car. Plenty of BMW owners have followed the company’s lead in creating art cars of their own, not to generate corporate prestige or marketing value but for the sheer joy of looking at and driving something that’s all their own.
When film and video producer Miguel Aponte-Rios of Veloz Media bought his 1989 E30 M3, he saw its white paint as a blank canvas on which to express his own idea of art.
“I’ve always tried to be different in some way with the cars I’ve had, to make them unique,” says Mig, as he’s known.
For Mig, the E30 M3 was an especially attractive platform for self-expression. He’d been obsessed with the model since it was new, when his older brother got one of the first E30 M3s imported to Puerto Rico.
“It was a beautiful car and as the younger brother, my dream was to drive it,” Mig recalls. “During my first week of college, my brother came over and dropped the keys in my hand and said, ‘Take it for the weekend.’ I spent the weekend driving it all around San Juan, and from that moment on I knew I wanted some kind of BMW.”
It didn’t take long before he got one of his own—not an M3 but a Z3 roadster, with which he was smitten after seeing it on the set of GoldenEye, the James Bond film that was shot partly in Puerto Rico, and which saw Bond swap his trademark Aston Martin for a BMW.
“We were all on the beach waiting for this new BMW to come out of the trailer, and as soon as it came out, I turned to a couple of the boys and said in a few years I would have one of those. After I graduated from college, I moved to Seattle, got a job and around six months later got a Z3.”
Mig later moved to Boston, where the Z3 was replaced by an M roadster that led him to autocross and eventually track driving and club racing. A few years later, he was driving a widebody E36 M3 with an S54 motor, a full-on race car that was very close in appearance and output to the factory M3s raced by Team PTG in the late 1990s. The car was very fast, so fast that Mig found himself driving away from other racers rather than competing with them.
“The widebody M3 was fun, but it got to the point where the car was so fast that I wasn’t really racing with anybody,” he says. “I missed that, so I started looking into another class that would be more competitive.”
At the same time, Will Turner was putting his E30 M3 race car up for sale, reminding Mig of his unrequited love for the original. He quickly sold the E36 M3 and used the money to buy the E30.
“Back to my high school love!” he says.
Built for the BMW CCA Club Racing J-Stock class, the car has typical race upgrades like a roll cage and beefier suspension, but mechanically it remains very close to stock. Exceptionally well sorted, the car had won 95% of the races it started with Turner at tracks like Watkins Glen, Lime Rock, VIR and Mont Tremblant, and it was in race-ready condition when Mig bought it.

Influenced by the ’80s…and by the history of the Art Cars
Except, that is, for its white bodywork, which Mig thought needed a little pizzazz. He decided to try something a little different to make the car stand out in the club racing crowd, and he took his initial inspiration from Jeff Koons’ M3 GT2 Art Car. That much is obvious, but a closer look reveals that it’s actually quite different, reflecting Mig’s artistic input along with that of the designers at Image 4 who executed the design and applied the vinyl wrap.
“I knew I wanted a multicolored ’80s influence,” Mig says, admitting to taking design cues from Benetton ads, Fruit Stripe gum and Skittles candy. “I also knew I wanted the dominant colors to be the BMW Motorsport colors of the ’80s—a lot of blues and reds. I took these ideas to Image 4 and they kind of took it from there.”
Based in Manchester, New Hampshire, Image 4 primarily designs and creates display space for trade shows and marketing events. The company had worked on car designs and wraps before, but usually to deliver a corporate marketing message. Designing a wrap from scratch for a private client’s race car was relatively new territory, but one the company went into with great excitement.
“A project like this energizes the business and the people who work in the business,” says Image 4 president Jeff Baker, who is also a car enthusiast. “We’ve always wanted to do something in the spirit of the BMW Art Cars and find it a fascinating concept, the idea of taking two-dimensional art and turning it into a three-dimensional execution. There are a lot of challenges around it, but we’ve always wanted to do it, and Mig’s enthusiasm for his project led us to go ahead and try it.”
The E30 M3 project officially started when Mig sent Image 4 his concepts and ideas, followed by a creative meeting in which it was decided that the design should have a lot of linearity and tension. Image 4 then studied the BMW Art Car collection to get an idea of what the artists had in mind when they created those cars and how they expressed their ideas on the cars themselves.
“The Koons Art Car was a guide as something Mig said he liked, but we looked into the entire history of the Art Cars,” says Baker, who also had to make sure they weren’t copying another car design but were making something original. “We dug into the concept behind them, their historical significance and the artistic basis. We also looked at a lot of other graphic and artistic input. For example, in dimensional space we looked at designers like Raymond Loewy. We also looked at a lot of architectural structure, to try to understand how other designers brought dynamic tension to inanimate objects. That really was the key to the design. There are some technical difficulties in creating a design over three-dimensional shapes, but the whole success of the project relied on evoking action and dynamism.”
Image 4 graphic designer Amanda Christensen initially gave Mig twelve designs for consideration. Several of those concepts were combined into the final design, which took 16 hours to install rather than the usual eight, including an all-nighter to get it ready for the final club race of the 2011 season at New Hampshire Motor Speedway. Lining up the panels and wrapping the film around the air intakes and rear wing presented especially time-consuming challenges.
“3M has manufactured the film for a decade now, and our installers are really good at managing the material physically,” says Baker. “You develop a skill for it, but to do it well requires a lot of patience. Part of the challenge was to understand how the linear lines were going to cross through multiple planes at multiple angles and how to work that out with how the material was going to react to the car. It terrifies me whenever I see it, but our installers use blowtorches [usually MAPP gas or similar—Ed.] to heat the vinyl and melt it around the shapes.”
The initial reactions of Mig’s fellow club racers (as well as the chatter on Facebook after the first photos were posted) were positive, and no one could deny that the car stood out on track.
“Making a car into a work of art can evoke some really strong feelings,” says Baker. “I’ve been watching the Facebook posts, and by and large people love it, but a number of people think it’s not for them. They’re very polarized.
“Art creates this effect. That’s one of the reasons we love art. It can bring out the best and the worst.”
Mig loves the car, and that’s really all that matters, though Image 4 wants to improve it a bit, redoing a few elements that didn’t meet their standards.
“There are a couple of things we’re going to go back and adjust,” says Baker. “For example, we need to rethink the air dam on the front and how the color angles come into it. We’d like to do more cars like this. It made us excited about being graphics and marketing people again, instead of just doing the same kind of stuff every day.”

Fun to look at and fun to drive
Like the Jeff Koons Art Car, Mig’s M3 looks fast and dynamic even while it’s sitting still. The design didn’t make the car any faster, of course, but it did increase the joy Mig gets from driving it.
“I had a grin the whole time when I raced it for the first time,” he says. “It’s a momentum car. What I love about the E30 M3 is that you have to really pay attention to the car and to the racers around you, and really look for ways that you can get ahead of the other cars. I love that you have to really analyze the way others are driving to figure out how to get around them.”
Mig did well in the first race with the car at NHMS, winning one of the four races, but he planned a lot of changes for the 2012 season.
“The car still needs to be worked on to get it down to M3T class spec and the lower weight for BMW CCA Club Racing, as right now it still has a lot of stuff in it from the previous class it raced in with Will,” Mig explains. “It still has things like the washer fluid can, the A/C compressor, interior carpet and even part of the back seat, which can all be taken out. It also has the stock clutch and flywheel, and we’re allowed to put on a lighter flywheel, which makes a big difference. We also plan to strip it down to the shell, repaint the engine bay and cockpit and rebuild the cage.”
Those changes will make the M3 faster, certainly, but even if this car were running at the back of the pack it would still draw the most attention and generate strong feelings one way or the other from those who see it. And that, of course, is what art is all about. 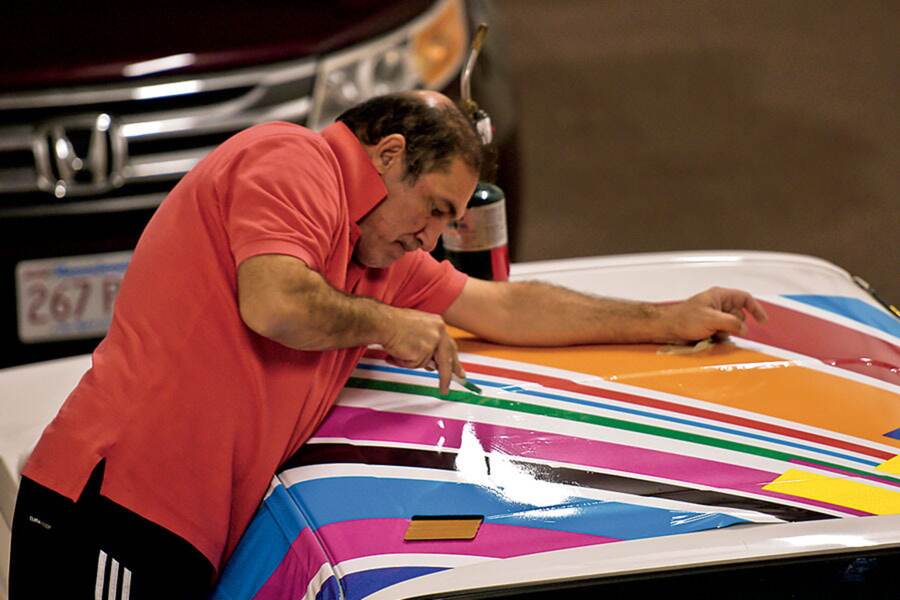 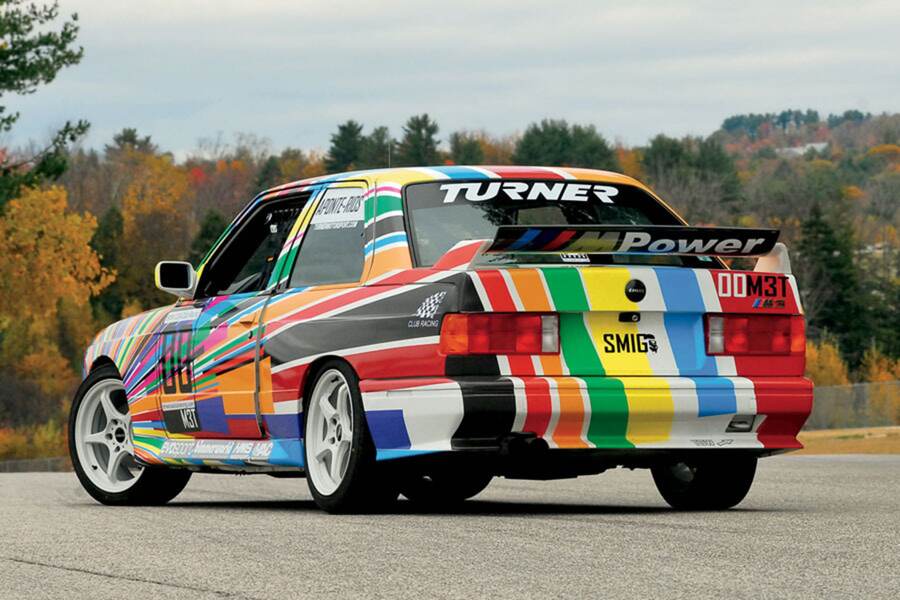 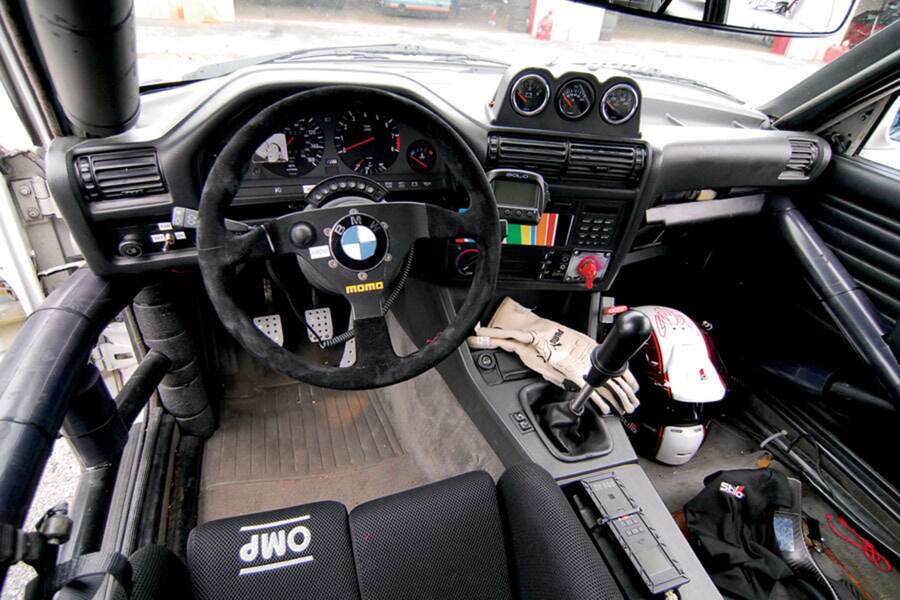 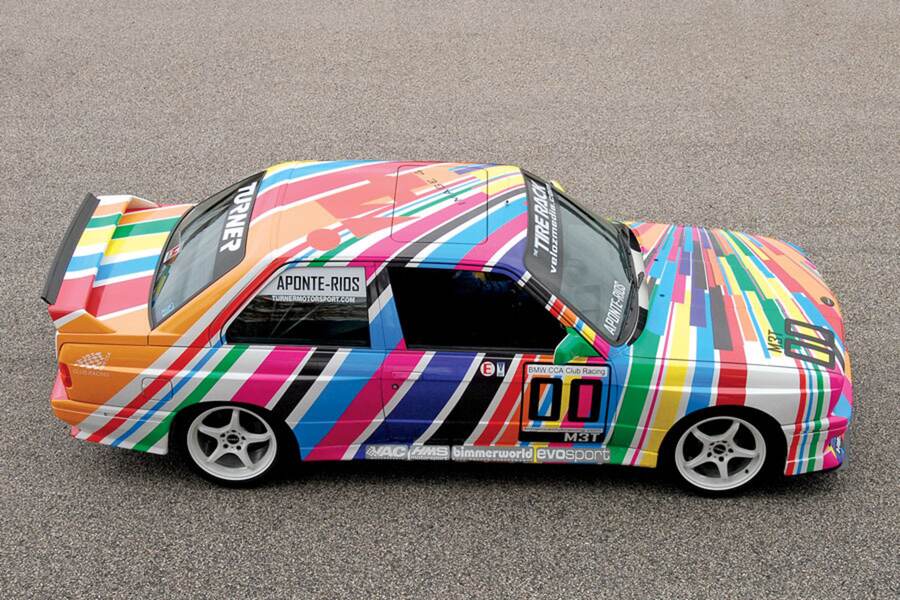 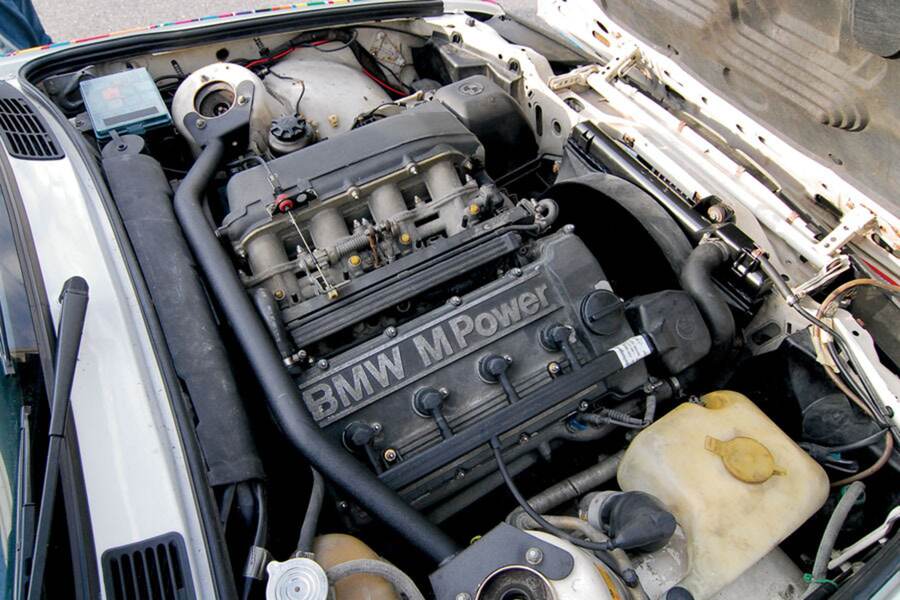 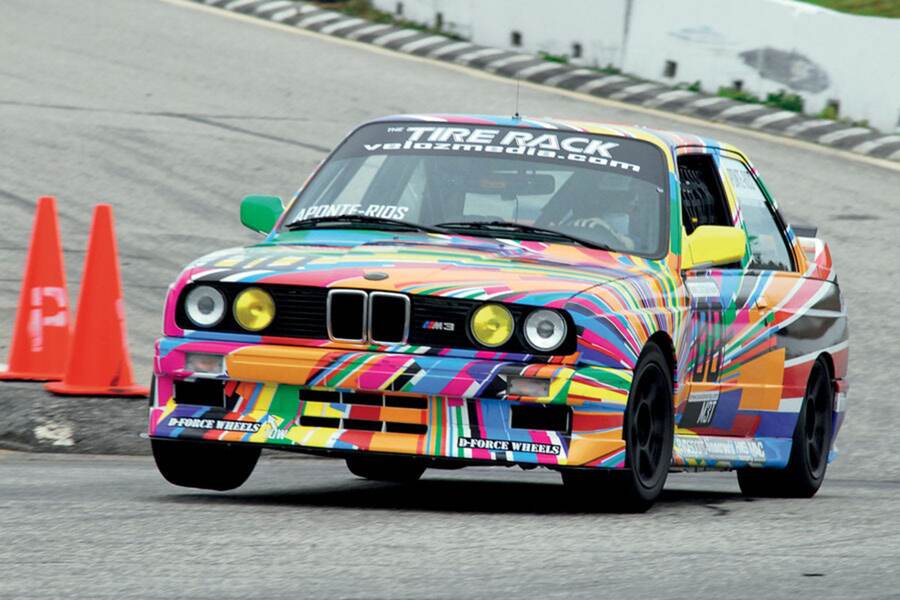 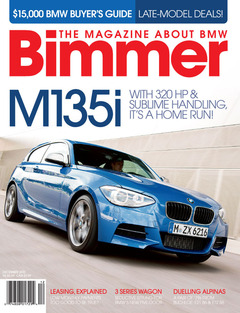