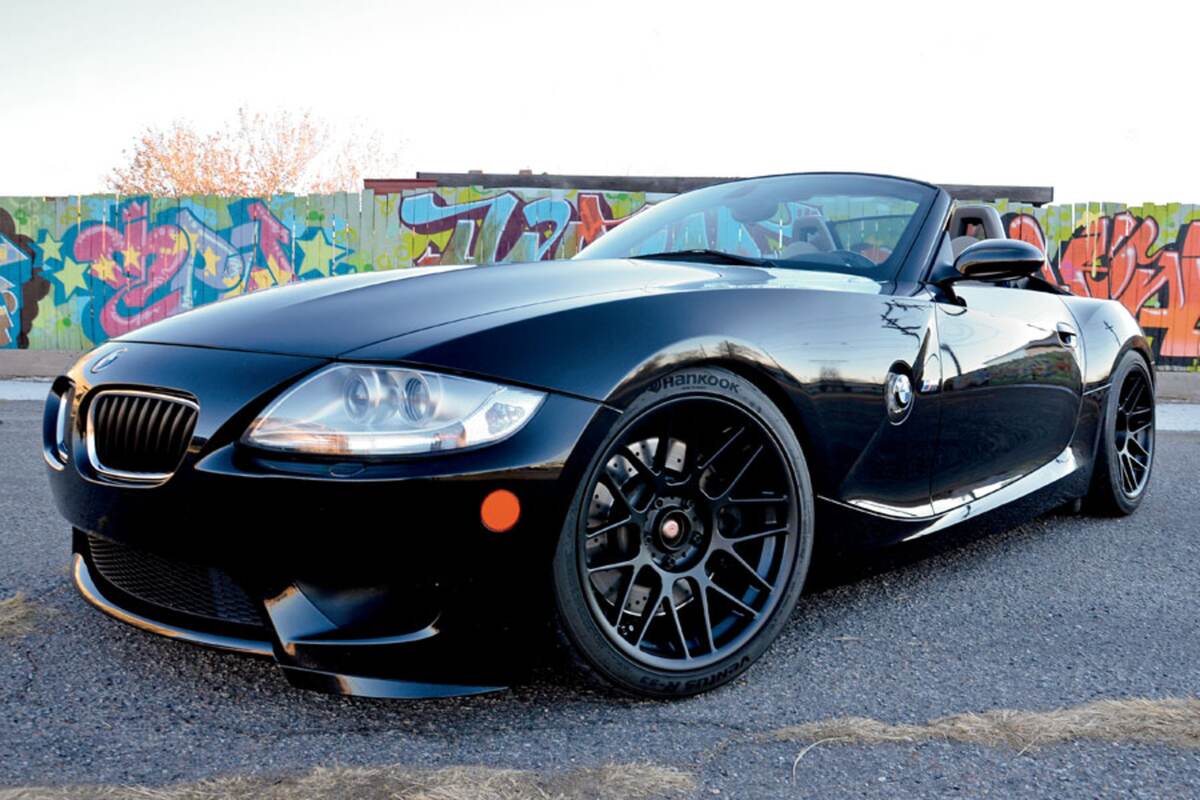 In an instant, Golden’s 1996 E36 328i went from gripping the road to sliding irretrievably out of control. Coming out of a fast, right-hand corner, the BMW fishtailed left and then right before going off the road backwards. Its passenger side hit a tree squarely in the center, sending the car spinning and then flipping end over end down a steep slope for 130 feet. A midnight run with friends in the mountains above Albuquerque, New Mexico had just come to an abrupt end.

Luckily, Golden’s only injuries were superficial, scratches caused by the sudden and violent deployment of the airbag. The BMW, on the other hand, hadn’t fared as well. Its roof was caved in, and every panel was damaged beyond repair. A carefully built project car had just bit the dust in a big way.

While such a dramatic accident would probably make most people take up a safer hobby—say, knitting—it didn’t affect Golden’s appreciation for high-performance cars and driving. If anything, it only served to reinforce his appreciation for how incredibly safe the Bavarian machines are in a serious accident. It also made him appreciate the need to temper his youthful enthusiasm, and to better prioritize his automotive purchases.

“The tires were bald, but I was like, ‘I’ll buy sway bars first,’” Golden laughs.

The 328i that had been destroyed in such spectacular fashion was Golden’s first BMW, though he’d grown up with the marque thanks to an enthusiastic father.

“My dad owned an 1800, so I have always been around them,” he says. “I remember an E30 convertible that he used to drive me and my brothers around in. Even when it was cold, he would drive with the top down.” 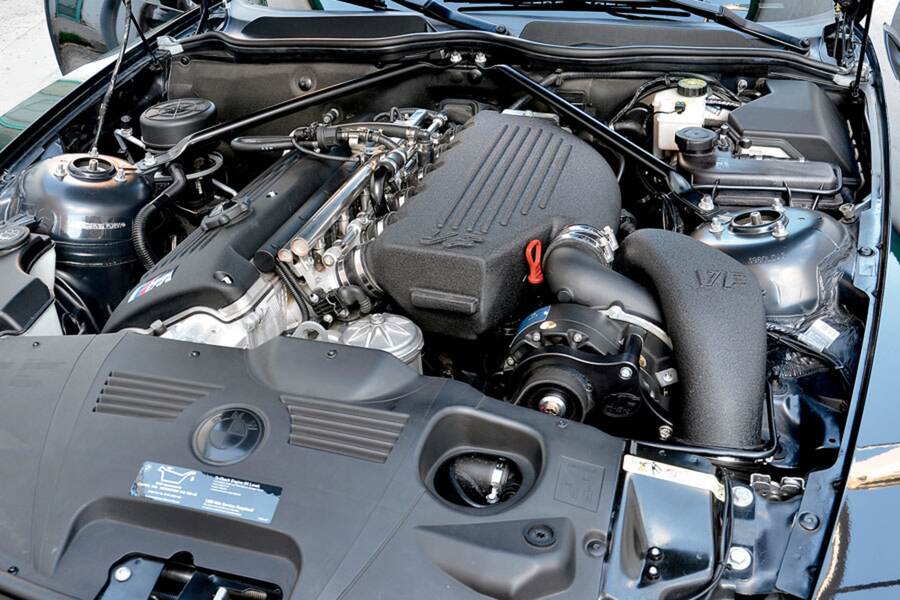 Golden was still in high school when he wrecked his 328i, but it didn’t take long before he moved on to another BMW. A couple of weeks later, the deceased 328i was replaced with a 1999 E36/7 Z3 M roadster in Dakar Yellow that soon received a modified suspension and a free-flowing exhaust. Two years later, that gave way to a 2009 John Cooper Works MINI, but he never fully warmed up to the hatchback and soon traded it for the 2006 E85 Z4 M Roadster you see here. By that time, Golden was attending the University of New Mexico, where he is currently studying business. When he’s not in class, he works as a parking lot attendant at Lexus of Albuquerque, which had taken the car on trade.

“After staring at it for a month, I just had to trade my MINI for it,” says Golden.

Sneeking peeks at a Z4 M

It wasn’t his first encounter with the model. He’d had a previous job at Sandia BMW, where he’d seen a new Z4 M waiting for delivery.

“As many times as I can remember, I snuck a peek at it to admire the lines and just appreciate its beauty,” he says. “Just thinking of how the car made me feel by simply looking at it, without even driving it, I knew I wanted to own a Z4 M someday.”

The car was painted in Black Sapphire metallic, a hue that suits the roadster’s flame-surfaced lines. It may have had its critics, but the first-generation Z4 (designed by Anders Warming) is likely the best representation of BMW design language under Chris Bangle’s leadership.

The Z4 M’s interior was as striking as its exterior, finished in two-tone Sepang Bronze Light and Black leather with wood trim, and it ultimately sold Golden on the Z4.

“It had every option except extended leather,” he notes. 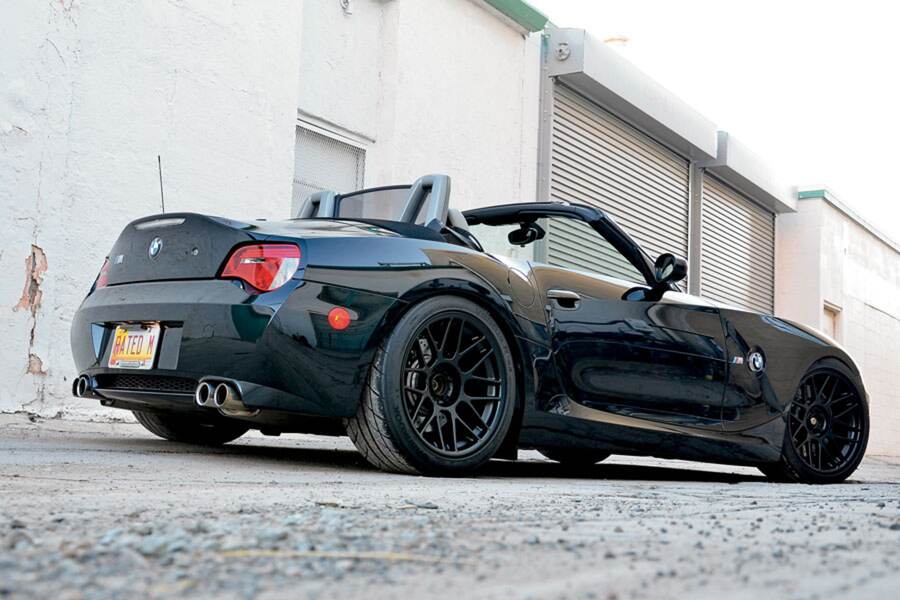 Powered by a 330-hp version of the S54 six-cylinder from the E46 M3, the Z4 M is no slouch even stock, but Golden couldn’t resist upgrading the potent two-seater. In fact, he started planning modifications before the car was even officially his.

“I had already planned to buy coilovers and keep upgrading from there,” he says.

First, however, came a shorter shift knob from a ZHP 330i, sourced because it was inexpensive by comparison to the shocks. That quickly snowballed into more radical modifications.

“When I bought the car, I had all the new-car excitement but soon decided the handling wasn’t up to par,” Golden says.

Swapping out the stock suspension for H&R coilovers let the BMW corner more quickly and responsively, and the lower ride height gave it a more aggressive appearance.

“My goal was to increase the handling and looks for the track and street,” he says. “Coilovers were ideal for this, as they allowed me to slam it for street driving and raise it back up for the track.”

“The exhaust sound is perfect,” he claims. “The Stromung makes a nice, deep tone with some popping and burbling on deceleration and no drone during daily driving.” 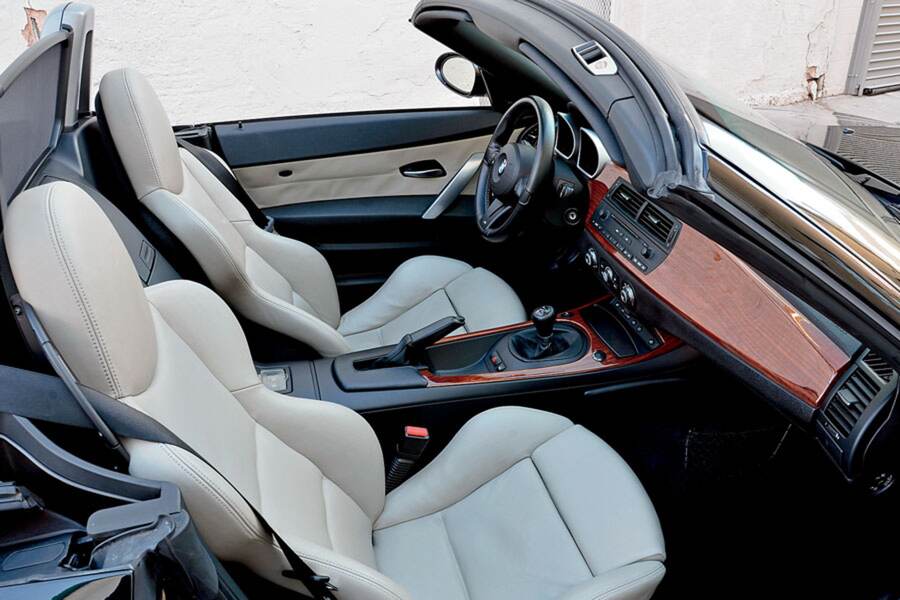 Golden also installed factory aero side skirts for a sleeker appearance, but his Z4 M wasn’t destined to became a mere boulevard cruiser. Instead, Golden followed through with his plan to give it frequent workouts at track days and autocrosses.

The first time he whipped it around the tight confines of a cone-lined autocross course, however, Golden discovered that the handling still wasn’t up to par.

“After my first autocross, I realized I needed to fix the understeer,” he says. “This led to my wheel and tire upgrade.”

He tried to buy a set of APEX ARC-8 wheels, but they were on back order at the company. Fortunately, the internet came to the rescue. “I picked up a set from a forum member who had put only 100 miles on them. They were the exact fitment I was looking for.”

“I also increased the front camber to -3 degrees while keeping the rear at -2.5,” he explains. “The result was amazing on the track, and understeer was no longer a problem. The car’s handling after the upgrades is night and day. The tires are so sticky, and along with the stiffer suspension, it’s a dream to drive. It’s a great track car. The chassis is very stiff and balanced.”

With the handling sorted, the quest for more performance continued. Golden blames his old JCW MINI for his desire for more power. 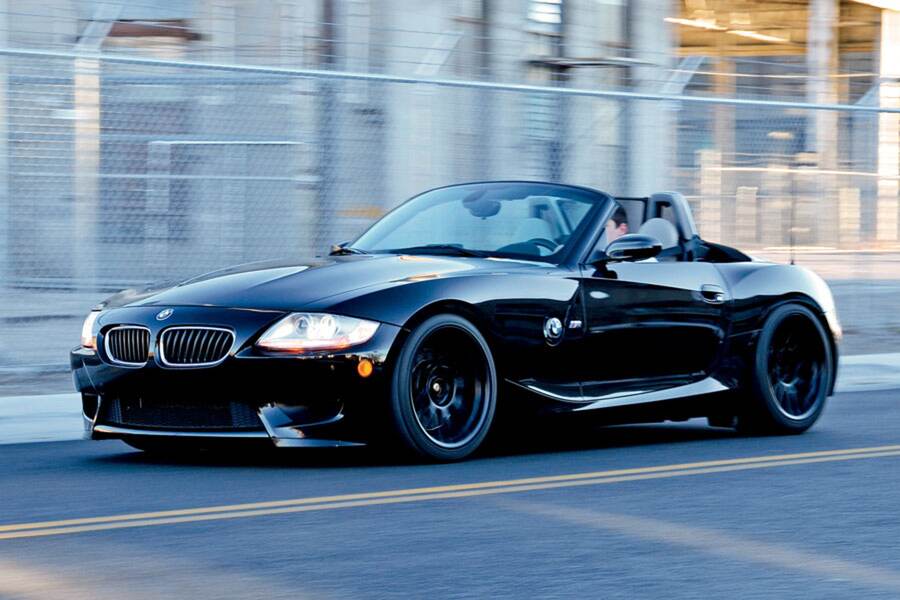 “The JCW MINI had loads of torque at this elevation, so it was a bit of a change to the more linear power curve of the M,” he says. “I soon learned to love the 8,000-rpm redline and all the power up top. Stock, the car is a blast to drive; it just needed a little more performance.”

While an intake and an ECU reflash would have sharpened up the S54, Golden had something far more radical in mind. After researching superchargers for the Z4’s S54 engine, he settled on kit from VF Engineering of Anaheim, California. VF’s VF570 Stage II kit is designed to increase the S54’s horsepower output from 330 hp to, as the name implies, an impressive 570 hp at the crank.

A V3-SQ supercharger delivers compressed air into a cast intake manifold with an air and water-cooled cartridge inside. Larger Bosch fuel injectors replace the stock injectors, and the conversion also includes a software reflash. The kit comes with all of the components needed to make it work, including a CNC-machined alloy bracket for the supercharger, OEM idler pulleys, molded intake ducting and a K&N air filter, to name just a few from a long list of parts.

Golden hoped to install the kit himself in his garage. After speaking with VF, he was confident that he could do the job.

“It took about three weeks, working in my spare time,” he says. “I think I worked on it for about 15 hours total.”

A few weeks after the installation was begun, the engine fired on the first turn of the ignition and settled down to a smooth idle.

When Golden had the engine tested on a chassis dyno, the reborn S54 pumped 470 hp to the rear wheels at about 7,500 rpm and an equally impressive 331 lb-ft of torque. That equates to approximately 575 horsepower and 404 lb-ft at the crankshaft. 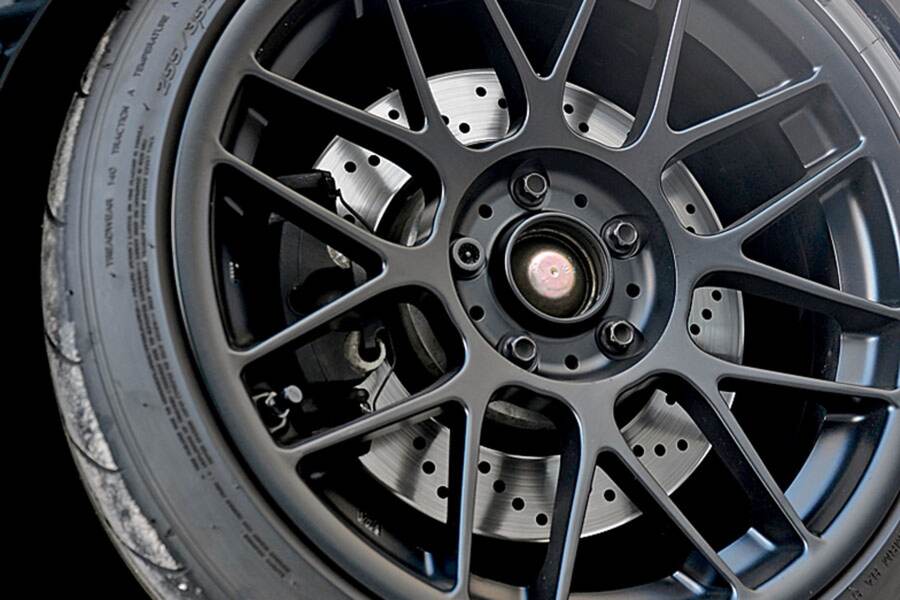 “There was a huge difference in acceleration,” notes Golden. “It made me laugh out loud the first time I drove it.”

Interestingly, he says that the engine’s behavior in stop and go traffic has actually improved. “It idles even better and more smoothly, and the drivability is near stock.”

On the road, Golden’s Z4 M feels like a rocket. It may not have quite the thrust of a turbocharged engine, but the supercharged S54 pulls like a freight train. The torque curve is flat as can be, and in fact it proves to be a bit much on a cold winter morning. Even on sticky R-compound tires, the Z4 slithers back and forth under heavy doses of throttle in the lower gears.

The supercharger makes a slight whine under aggressive acceleration, but the dominant noise is the raspy howl of the S54 engine, amplified in this case by the Active Autowerke headers and Stromung exhaust.

As the day warms up along with the pavement, grip improves dramatically. There’s so much adhesion that we can’t really probe the limits safely during street driving, but we do know that Golden’s Z4 appears to have retained an impressive balance where acceleration, handling and braking are concerned, despite the massive power increase. Sure, the ride is on the stiff side, but that doesn’t bother Golden.

As impressive as the Z4 is in its current specification, perhaps one of the most noteworthy aspects of the build is the fact that Golden performed all of the work on it himself, from the suspension installation to the supercharger conversion. While most owners of modern BMWs simply hand their cars over to a shop for upgrades and maintenance, it’s nice to meet an enthusiast who is both brave and skilled enough to turn a wrench on his prized BMW. 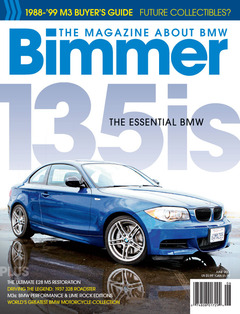