Ignatey Terzian’s rare and beautiful 1974 2002 Turbo is the fulfillment of a lifelong dream to put a classic, high-performance BMW in his driveway. 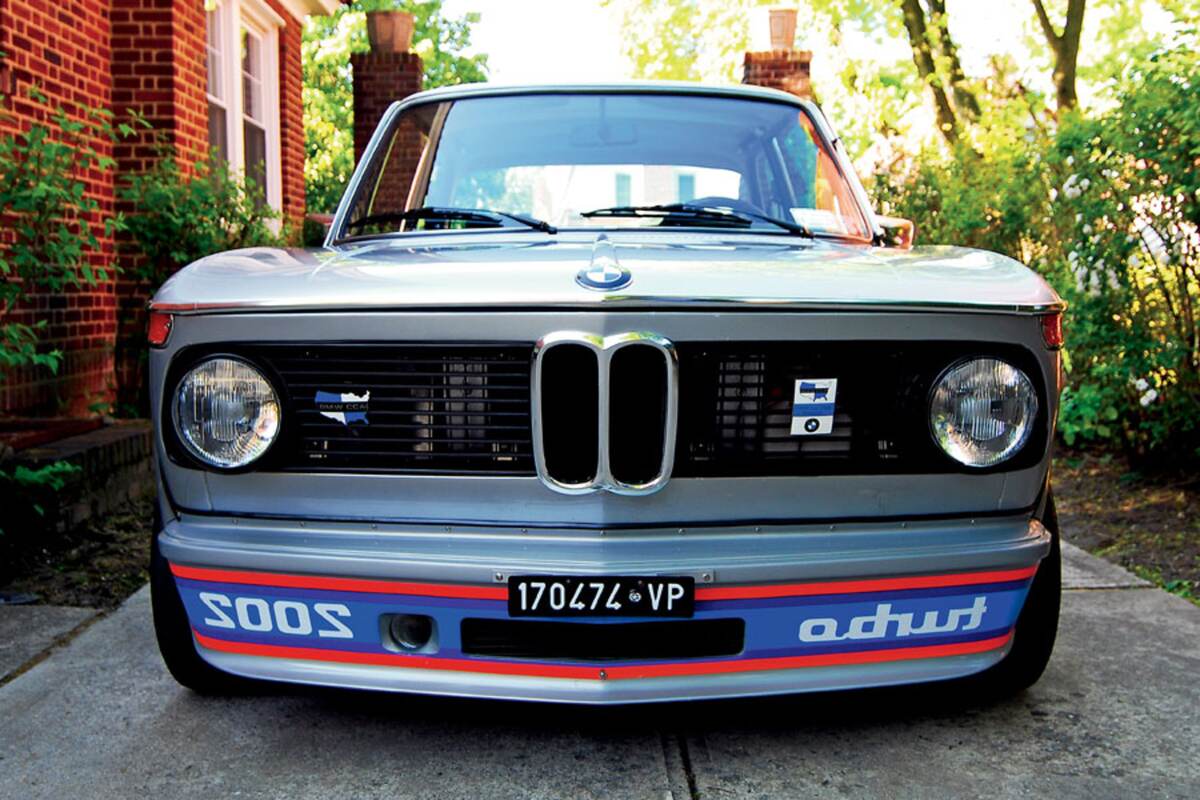 Turbocharged engines may dominate today’s BMW lineup, but they were rare in the production cars of the early 1970s. BMW first experimented with turbocharging in the futuristic Paul Bracq-designed Turbo concept, which was introduced just in time for the 1972 Summer Olympics in Munich.

The Turbo’s design elements remained conceptual until they reappeared on the M1 in 1978, but its turbocharged four-cylinder engine was put into production just a year later, when the 2002 Turbo debuted at the 1973 Frankfurt Auto Show.

To make the 2002 Turbo, BMW started with the 1,990cc M10 four-cylinder from the 2002 tii and added a KKK turbocharger that bumped output from 130 horsepower at 5,800 rpm to 170 hp at the same engine speed. Turbo upgrades also included an oil cooler and a high-performance capacitor ignition system, as well as a limited slip differential, vented brake discs up front (of the same 256mm diameter as the tii’s) and 250mm drums at the rear (20mm larger than the tii’s).

The car also received a more performance-tuned suspension: According to the M Registry, that consisted of 2002 tii springs up front and Turbo-specific rear springs “with three different spring pads to adjust the ride height,” paired with Bilstein shocks. The 2002’s 16mm rear anti-roll bar was retained, but on the Turbo it was matched to a 20mm front bar instead of the usual 15mm unit. The Turbo also got reinforced trailing arms, rear wheel bearings, hubs and stub axles. The cockpit featured a sport steering wheel, Rentrop bucket seats and a red instrument panel to surround the gauges. Structurally, the Turbo differed from a regular 2002 with heavier front frame rails, a thicker floor around the rear suspension mounts, a revised trunk floor to accommodate a larger spare tire and special 70-liter fuel tank, and a unique nose panel.

The exterior is defined by the distinctive fender flares added to accommodate the Turbo’s wider tires, which measured 185/70HR-13 where the 2002 tii’s checked in at 165HR-13, plus front and rear spoilers that made it look more like a race car than a street-legal road car even without the optional Motorsport stripes—themselves another Bracq design. The original version of that striping featured the world “Turbo” written in reverse on the front spoiler, so that drivers could tell what was approaching in the rear view mirror. That car would be coming up fast, too: Where the 2002 tii needed 9.4 seconds to make the zero to 62 mph dash, the Turbo needed just 6.9 seconds, while top speed increased from 118 mph to 131.

Unfortunately for BMW, the timing of the Turbo’s debut couldn’t have been worse, coinciding as it did with the start of the OPEC oil embargo. It was a bad time for performance cars, and only 1,672 of the 2002 Turbos were built before BMW pulled the plug on this high-strung hot rod. 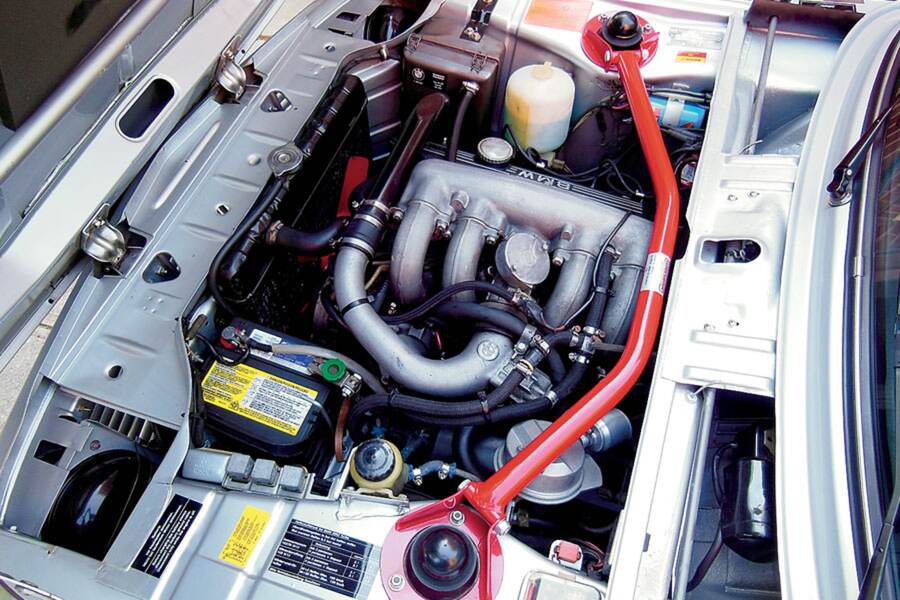 None of the 1,672 Turbos built by BMW were officially sold in the U.S., so it’s pretty unusual to come across a beautiful example like the one Ignatey Terzian has in his garage in Queens, New York. An Armenian born in Iran, Terzian lived in that country until he came to the U.S. some 35 years ago.

“When I was growing up, it was a dream to have this kind of car, but it wasn’t accessible when you’re a student and don’t have much money,” he recalls. “But in the back of my head, there was always the thought that I would own a BMW someday.”

That dream became more accessible when he moved to the U.S. at 20 years of age, but the priorities of raising three kids and running a business put everything else on hold. A 525i served as the family car for a time, and then Terzian decided to pursue his dream of owning something special.

“I’ve always loved cars but never had a chance to indulge myself,” he says, “but I decided before I hit age 50 that it was a good time for me to do it.”

Looking for one thing, 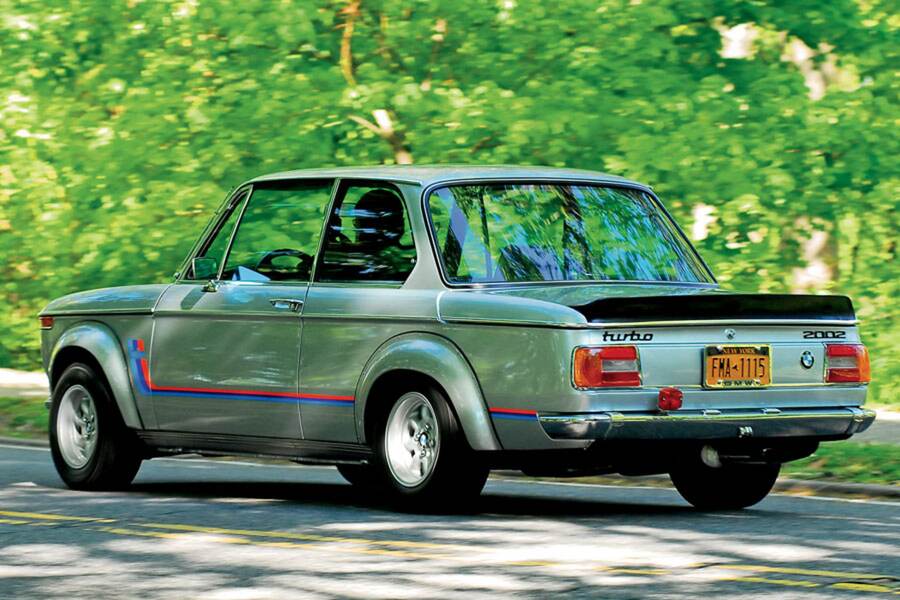 When Terzian began his search for his something special, he was looking for a classic from the early 1970s, from the days when he was a teenager still dreaming of owning a BMW. An initial search for a 3.0 CSL proved fruitless, but he was also keeping his eyes open for a 2002 tii. His search turned up something even more rare…and fast: a 1974 2002 Turbo.

He found the car for sale in Hemmings Motor News, advertised by a dealer in Danbury, Connecticut selling it on behalf of a widow whose husband had owned it when he died. Danbury was an easy drive from Terzian’s home in New York, so he drove up to see it the next day and made an offer immediately.

“I was kind of keeping my eyes open for a round taillight 2002 tii, but when I saw the Turbo I knew that was the car I wanted to get,” he says. “I found the car very appealing because of its limited production numbers, and I also thought the color of the car [Polaris silver metallic] was very eye-catching.”

Terzian’s 2002 Turbo is number 72 built, one of 667 painted in Polaris silver from the factory, with the rest painted Chamonix white. It’s fitted with a four-speed manual transmission rather than the optional five-speed, and it also lacks the optional sunroof. Since it’s an early model, it has the reverse lettering on the front air dam that tells people dawdling up ahead to get out of the way, in no uncertain terms. BMW faced harsh criticism for the brash lettering and dropped it after around 150 units were made, influenced by changes in attitude brought on by the OPEC oil embargo.

Terzian’s investigations revealed that his car was built in Munich on March 15, 1974 and delivered to BMW Italia S.p.A. on May 17. It was sold through the Bologna dealership that year to its first owner—a soccer player on the Italian national team—but Terzian isn’t sure how many owners the car had after that, perhaps two or three. He does know that it came to the U.S. in 1991, and that he bought it in 2005.

This car may not have a well-documented ownership history, but it was clearly cared for meticulously over the years and driven rather little. Today, the car has around 69,000 miles on the odometer, some 7,000 of which were put on by Terzian himself. 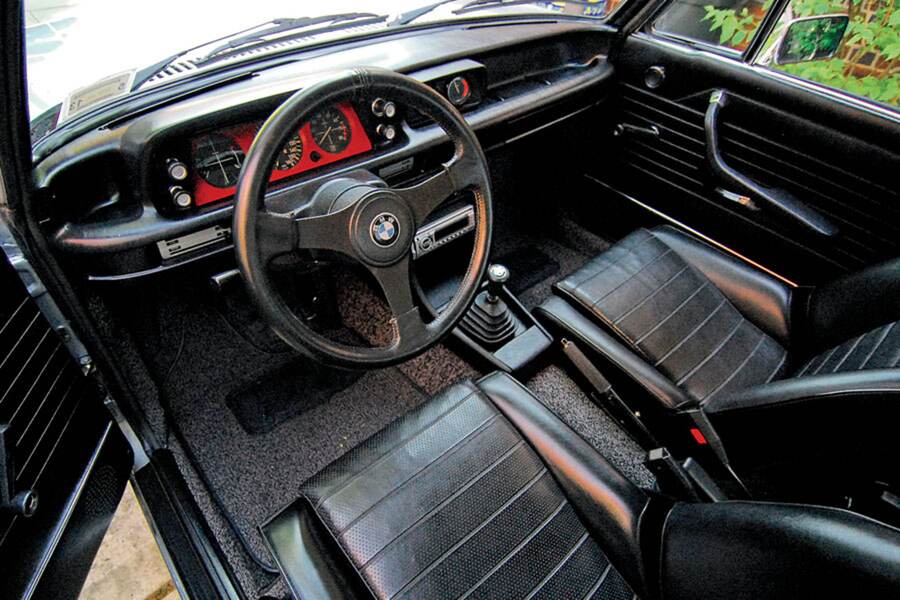 It was repainted in the original Polaris before Terzian bought it, but it still has the original engine, transmission, suspension and interior. Returning the car to as-new condition required only minor work, some of which Terzian did himself while leaving the rest to K&S Foreign Car Repair in Syosset, New York. Mechanically, the only change has been the addition of a reserve coolant tank.

“Body-wise, the car was in very good shape,” says Terzian. “It just needed little bits and parts here and there, and whatever pieces that looked old were upgraded to new. For example, the rear bumper had to be rechromed and the front grill had some dents, so we fixed that. The fender flares and front grille were also repainted to fix stone chips.”

Interestingly, some items installed on the car indicated that it had been taken to the track at some point in its life.

“When we got the car, it had a racing harness, as well as a fire extinguisher and larger wheels and tires,” says Terzian. “The front seats are also in such good shape that we think a previous owner may have taken them out and had racing seats put in at some point, then reinstalled the stock seats to sell it.”

When the 2002 Turbo reached on the roads in 1974, it quickly developed a reputation as a “Jekyll & Hyde” type of car. It drove much like a standard 2002 tii until the turbo boost kicked in, prompting Georg Kacher to write in Car magazine: “Although the powerplant delivered its goods with great smoothness and surprising mechanical refinement, the complete change of character that occurs the moment you hit 4,000 rpm made the blown BMW a brutal car to master on the road, a beauty turned beast and vice versa.” 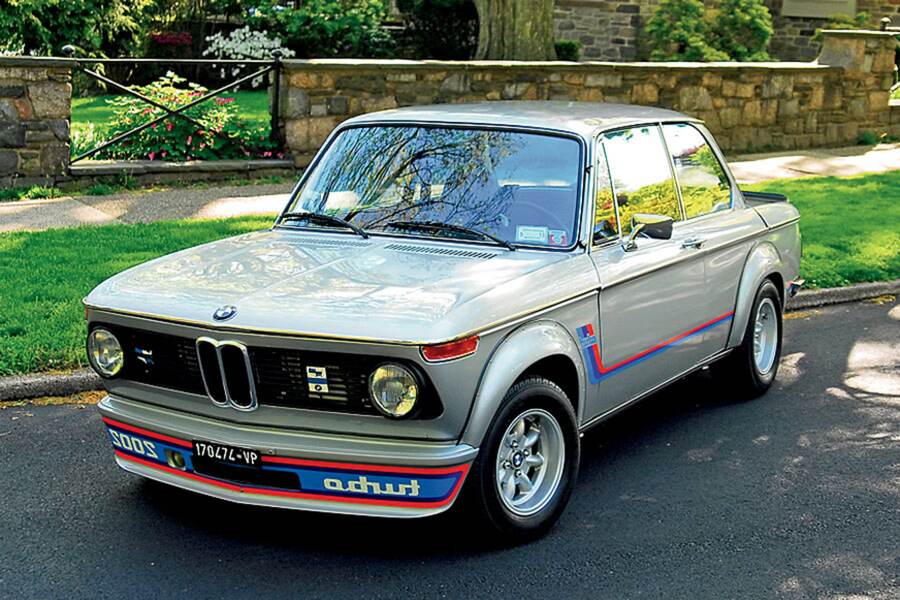 Over the course of his 7,000 miles behind the wheel, Terzian has experienced both sides of the 2002 Turbo’s character for himself.

“This car is meant to be driven hard,” he says. “If you drive it around on the local streets, it doesn’t perform the way it’s supposed to perform, but once you get it out on the freeway and open it up, it’s like unleashing a monster. All the power comes on between 4,000-5,000 rpm. I would love to take it on a track sometime and let it run.”

We also got a chance to drive the car, but since our seat time was spent on the streets of Queens, we only experienced the Dr. Jekyll side of the car’s personality, not Mr. Hyde. Even so, we did find a car that still feels well put together and solid, and which is as easy to drive around town as a standard 2002.

Most of Terzian’s driving in this car isn’t in Queens, but back and forth to the various events he participates in during the year.

“I will take it around the block occasionally if it’s nice out, but I drive it mostly to car shows,” he says. “I never take it anywhere where I need to leave it in public parking, and it’s stored during the winter.”

Terzian regularly takes his 2002 Turbo to various shows in the New York area, including the prestigious Historic Festival at Lime Rock Park (where it won its class) as well as the Greenwich Concours d’Elegance in Greenwich, Connecticut. It’s also been shown at local car events in Westbury and Manhasset, New York. Wherever the car is on display, it’s always a crowd favorite, especially among the BMW faithful. 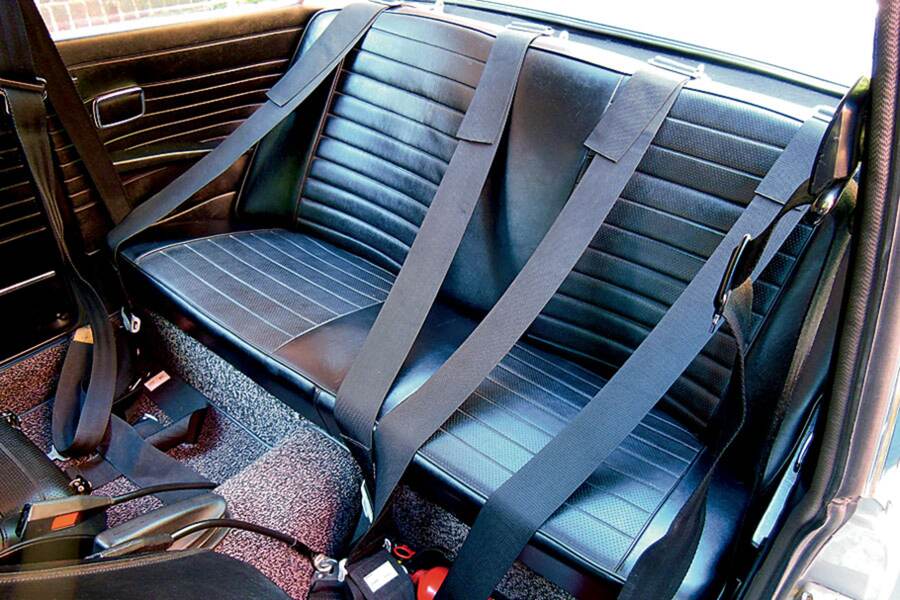 “It’s unbelievable the reactions the car gets,” says Terzian. “Many people ask me if it’s original or a re-creation, because many have never seen this car before. At any show we go to, anybody who knows anything about BMWs gathers around the car.”

Even though he drives it only around 1,000 miles a year, Terzian has found that it takes some effort to keep a nearly 40-year-old 2002 Turbo in tip-top running condition.

At the time of our drive, the car’s original distributor (a vacuum-retard system) was being rebuilt, so the car was running with a vacuum-advance distributor from a 2002 tii, which let the engine idle at a higher speed than is typical. Terzian is also expecting to have the turbo rebuilt in the not too distant future.

“The turbo tends to go bad and a lot of people replace them with newer units, but I want to get the original KKK,” he says, explaining that he’s particular about keeping the car as original as possible, sourcing most NOS parts through Walloth & Nesch, a BMW source in Arnsberg, Germany.

It’s more than a little ironic that the 2002 Turbo—the first European production car with a turbocharged engine—was dropped from production after just one year because it was considered a gas guzzler, while turbocharging is seen today as essential for fuel economy as well as performance. The 2002 Turbo’s lack of efficiency led to its demise, but in the last few years BMW really had no choice but to use turbocharging to meet modern standards for emissions and efficiency—funny how times change.

The 2002 Turbo was introduced at the wrong time for a high-performance car, which has made it a rare sight. Thanks to owners like Ignatey Terzian who spend considerable time and expense keeping them alive, some of these legendary Turbos are both shown to the public and driven the way BMW intended—hard and fast! 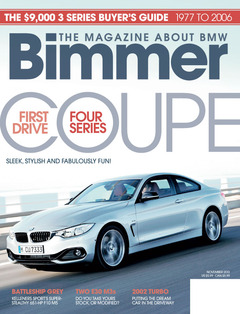