For the first time in more than 30 years, a 320i returns to the BMW model lineup. Like the original, it targets first-time buyers by combining an aggressive price with traditional 3 Series virtues. 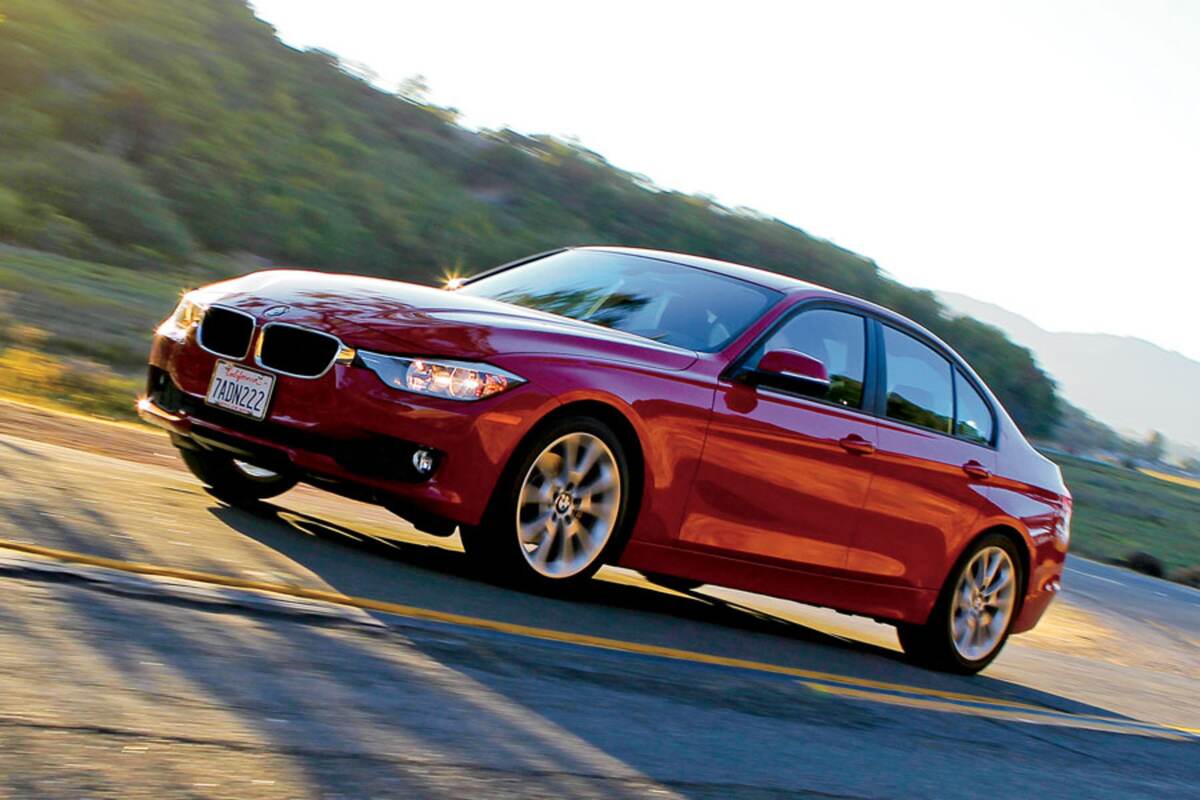 Nearly forty years ago, in 1977, BMW introduced the 320i to the U.S. Though many enthusiasts felt the new E21 3 Series wasn’t as dashing as the beloved 2002 it replaced, the 320i drew widespread praise for its ride, handling and responsive engine. It also put BMW NA on solid ground financially, with U.S. sales doubling during the car’s six-year run from 1977 to 1982.

The 320i nameplate became almost as iconic as that of the 2002, at least for a certain generation, but BMW didn’t use it again for more than 30 years. Now it’s back, applied once again to a car targeted at first-time BMW buyers looking for a quality sports sedan that’s practical and efficient yet fun to drive.

With a base MSRP of $32,550, the 320i sedan undercuts the 328i by $4,300 and costs only $1,350 more than the smaller 128i Coupe. It’s also priced comparably to Japanese sedans like the Mazda6 and Honda Accord, which should encourage potential buyers to upgrade from other marques. 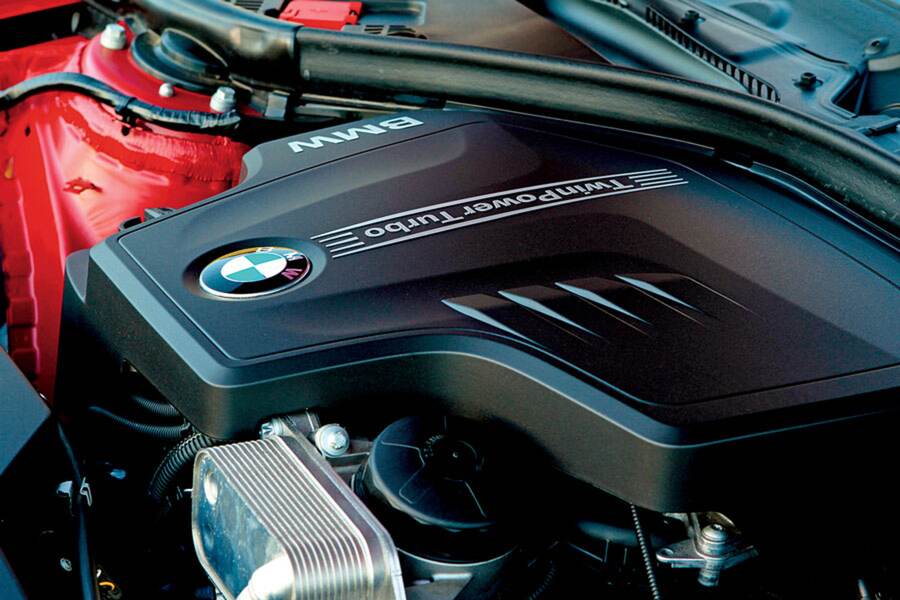 Within the BMW model lineup, the 320i and 328i are much more alike than different, but key distinctions exist in the engine bay as well as with equipment levels and options. In addition to the badge on the trunk, the 320i can be identified from the outside by its single tailpipe, which hasn’t been seen on a 3 Series for some time. (The 328i has a dual tailpipe.)

Inside, the 320i is equipped with manual seats as standard, and the power seats that are standard on the 328i are optional at $995. The 320i isn’t offered with the Sport, Luxury, Modern and M Sport Line trim options that are available on the 328i and 335i models, though a Sport Package is available. Neither can the 320i be ordered with the Dynamic Handling Package offered on the more upscale models, or with standalone options like Adaptive M Suspension, Active Cruise Control, Parking Assist, Park Distance Control, Rear View Camera and automatic high beams, though Park Distance Control and the rear camera are available in the Driver Assistance Package ($950). Also nixed are shift paddles for the steering wheel (on automatic cars) and the premium Harman-Kardon sound system.

Having fewer options available helps to differentiate the 320i from the 328i and will make the car more appealing to its primary target market, BMW hopes.

“The 3 Series has universal appeal across age groups, but we thought we could do better with the younger crowd, especially those between 20 and 30,” says BMW of North America 3 Series product manager Nick Leleu. “Younger buyers are very value conscious, and we wanted to keep it simple by offering fewer packages and options. Through our research we’ve seen that these buyers don’t necessarily want things like all the latest driver assistance technologies in their car. We’re hoping to attract buyers who have never owned a BMW, so we also needed to account for the fact that they may not be familiar with the way BMW does things. Having a simpler offer makes it easy for them to enter the BMW world for the first time.” 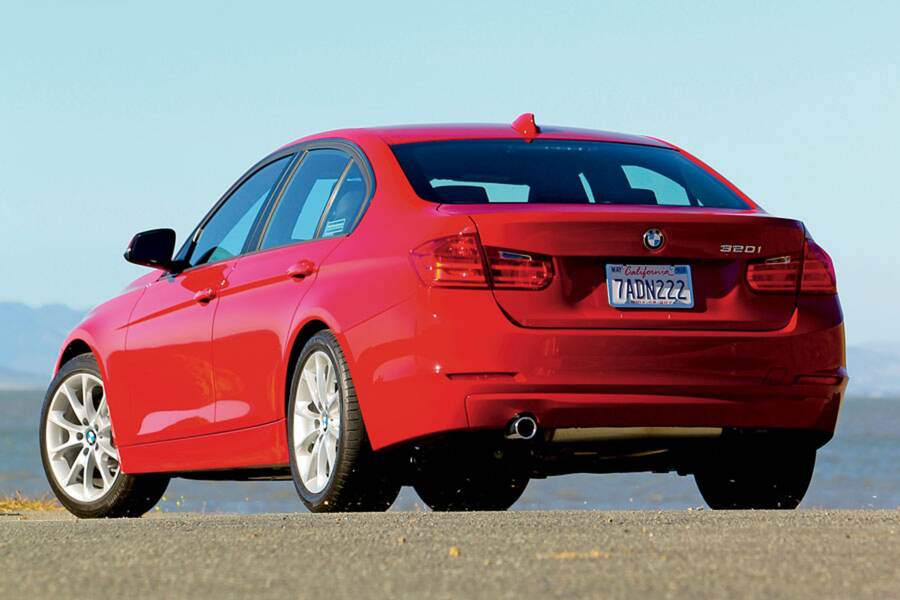 I’m all for keeping things simple with the 3 Series, and aside from an automatic transmission, our test car was equipped almost exactly as I would order a 320i, with Melbourne Red metallic paint ($550), black leatherette seats and Sport Package ($1,300). You get a lot for your money with Sport Package, as it includes M Sport suspension, 18-inch wheels (with performance or all-season tires), Sport seats and M steering wheel, an Anthracite headliner and an increased top speed limit (146 rather than 130 mph).

Interestingly, while a base 320i costs $4,300 less than a base 328i, the difference increases to $5,500 when both cars are equipped with Sport Package (or Sport Line, in the case of the 328i) and a manual transmission.

Beyond the sticker, the biggest difference between the two cars is found in the engine bay. Though both use the 2.0-liter N20B20 four-cylinder TwinPower Turbo engine, the “U0” version in the 320i produces 180 hp and 200 lb-ft while the “O0” variant in the 328i makes 240 hp and 255 lb-ft. The two variants share much of their hardware: turbochargers, intake manifold, intercoolers, crankshaft, connecting rods, bypass valve and HMF (hot-film mass air flow) meter. The power difference comes from engine management software mapped for lower turbo boost; surprisingly, the pistons in the 320i give it a higher compression ratio than the 328i (11:1 compared to 10:1), not for more power but for hotter combustion that leads to better fuel efficiency and lower emissions. 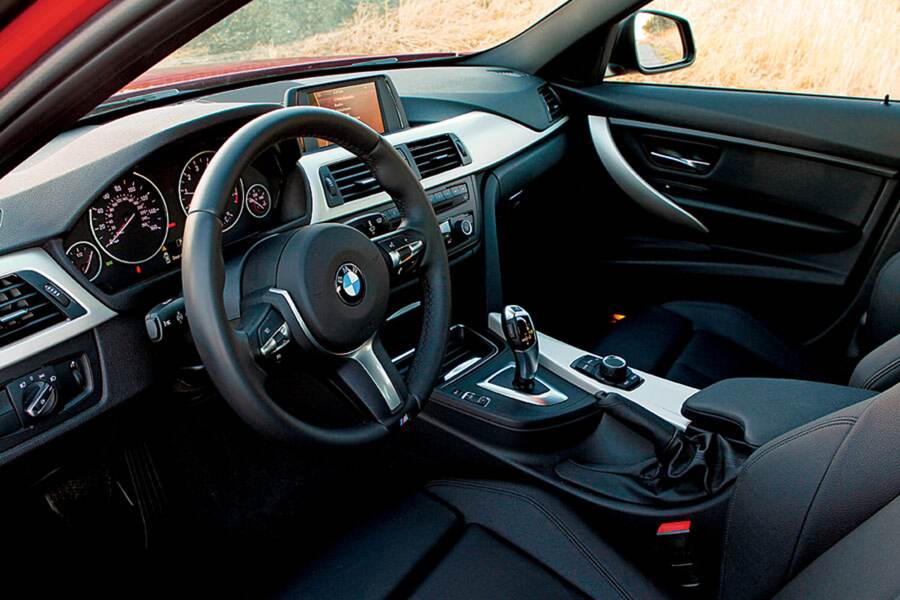 Other under-hood differences between the 320i and 328i include a lower-power water pump (200w vs. 400w), a hotter thermostat (108°C vs. 103°C) and a different wiring harness. The single-tailpipe exhaust in the 320i also lacks the flap valve found on the 328i. Both cars share transmissions (the 8HP45 automatic and the I-plus manual) and brakes, which measure 13.0 inches in diameter at the front and 11.8 inches at the rear.

At 3,250 lbs. with a manual and 3,295 with an automatic, the F30 320i outweighs the E46 by just 31 or 12 lbs., respectively. That’s pretty amazing for two cars that are two generations and a decade apart, especially when the newer car is longer and wider than its ancestor. It feels larger, too, though it’s still a lot of fun to drive on a twisty stretch of road thanks to its excellent balance and the good grip provided by the Bridgestone Potenza S0001 tires. 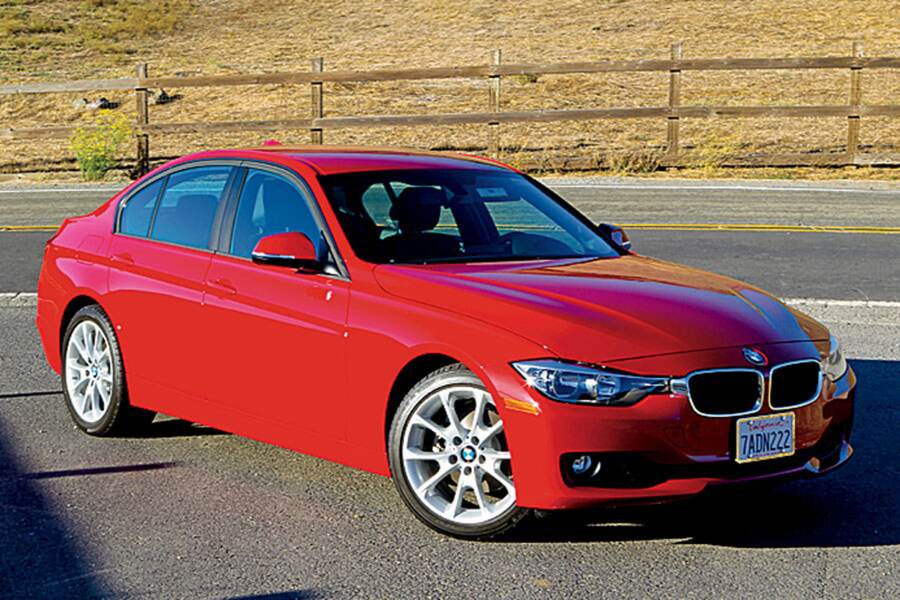 In fact, the 320i felt more like a “real” 3 Series than any other F30 model I’ve driven since the series was introduced. Some of that is due to its lighter weight—the 320i carries around 100 fewer pounds than the 328i and almost 300 fewer than the 335i—but more of it is down to the car’s improved steering.

We couldn’t get anyone at BMW to directly confirm or deny it, but the 320i steering felt much better than the 328i I drove early in 2013, with a much more natural and consistent feel, especially as you first turn the wheel off center to enter a corner. We suspect that the refinements made for the 4 Series found their way onto the 3 Series, which was criticized widely for its lack of steering feel when the F30 was introduced.

“Just as with the suspension, the engines or the transmission, the steering is a work in process. If there are things that we can do to improve it, we’re going to do it,” says Leleu. “I know that in general the steering system is something that has been worked on from day one on the F30, and it keeps being worked on.”

Our test 320i was equipped with Sport Package, which includes M Sport suspension as well as Sport seats, steering wheel, etc. The M Sport suspension suits a wide variety of conditions, and it’s hard to imagine that most drivers would miss the option of the Adaptive M suspension after driving an F30 with the non-adaptive M Sport suspension. In fact, I thought the 320i felt more controlled and responsive down my favorite stretch of twisty road than a 328i with the Adaptive suspension in the Sport or Sport+ settings, but that could also have been due to the car’s lower weight and improved steering feel. Speaking of settings, the 320i has options for Eco Pro, Comfort and Sport on the driving mode button next to the gear lever, but there’s no Sport+ setting as on the 328i and 335i Sport Line models. 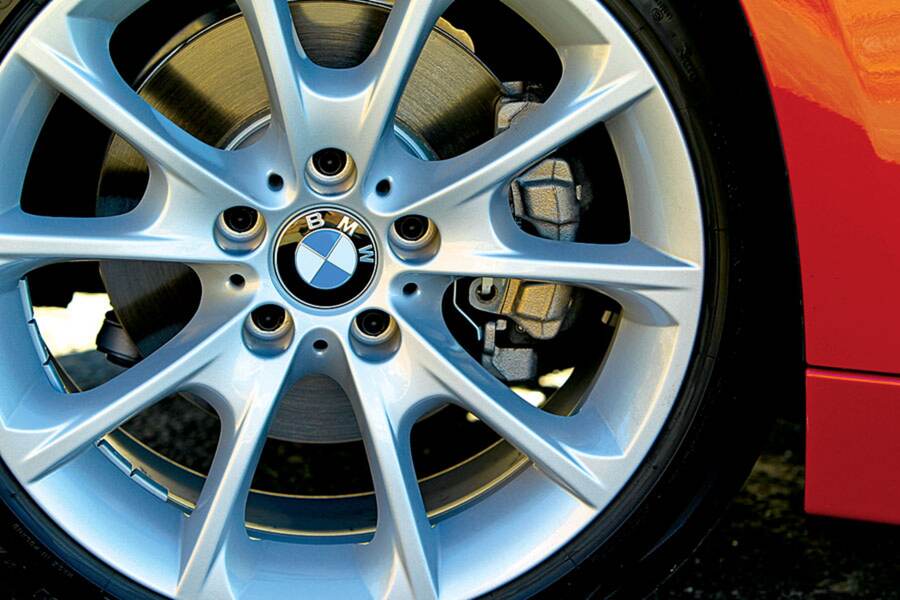 As firm and well damped for performance driving as the suspension is, it’s still compliant over rough patches and comfortable on the freeway. There, its motor is more than adequate, able to cruise easily at extra-legal speeds while still delivering excellent fuel economy. That’s one of the reasons BMW made this car, along with the need to meet stricter emissions regulations. (Ironically, that’s also what drove development of the first 320i back in the 1970s.) The 320i is EPA-estimated to return 24 mpg city and 36 mpg highway, but I managed to get 39 mpg on a long highway trip while driving in the “Eco Pro” mode. My press car had very low mileage, so this will likely improve as the engine breaks in. The E46 325i, by comparison, was EPA-rated at 20 city, 29 highway back in 2003.

Fuel economy is aided considerably by the eight-speed automatic. A perfect match for the N20 engine, it shifts quickly and smoothly and is always in the right gear. It will kick down sooner than it does in the 328i when going up hills or passing slower traffic, but that’s to be expected given the 320i’s lower output. I would probably order a 320i with a manual, but it’s hard to fault the automatic.

Overall, the 320i has a surprisingly energetic feel for a car that looks so modest on the spec sheet. I’ve driven a lot of high-horsepower cars this year, and I was surprised by the 320i’s liveliness.

So, too, are those of you who’ve bought or driven one. We asked our fans on Facebook to comment on the 320i, and our invitation drew mostly positive comments.

Kevin Hagler said, “I have a 320i with manual transmission and Sport Package on order for my next daily driver. My current daily, an E46 M3, is moving to track duty.”

Danny Bouchard drove a 320i on loan and was impressed: “I currently drive a 320i xDrive with automatic transmission (while my car is at the dealer) and found out it was a really good daily driver. It surprises me, in fact: almost GTI performance and all-wheel drive, not bad.”

As Bouchard’s comment indicates, the 320i as available with both rear-wheel drive and all-wheel drive; the xDrive model is available only with an automatic transmission and carries a $2,000 price premium.

All in all, I was very impressed with the 320i and would seriously consider buying one if I were looking to replace my trusty E46 325i as a daily driver. I don’t often find myself frustrated by a lack of power in my E46, and the added torque and better fuel economy of the 320i would fill the bill if I were looking for a new BMW. I even prefer the manual seats over the electric, which is another plus.

Like the original E21 model, the new F30 320i is not the kind of car that’s going to go storming down mountain roads at breakneck speeds or drifting through corners, but it’s still good fun to drive. More importantly, it excels as a daily driver, which is the kind of driving almost all of us do the most. It has all the traditional BMW 3 Series virtues at a value-oriented price, which will also bring new buyers into the fold.

Sidebar: Second opinion: An entry level BMW? Not at this price 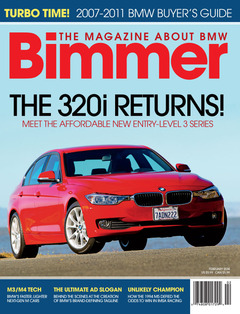