The new face of fun

The new M235i is the first M Performance model to reach the U.S., but don’t let the M badge fool you. This is an “is” in the grand tradition of sporty yet usable BMWs, and it’s great fun to drive. 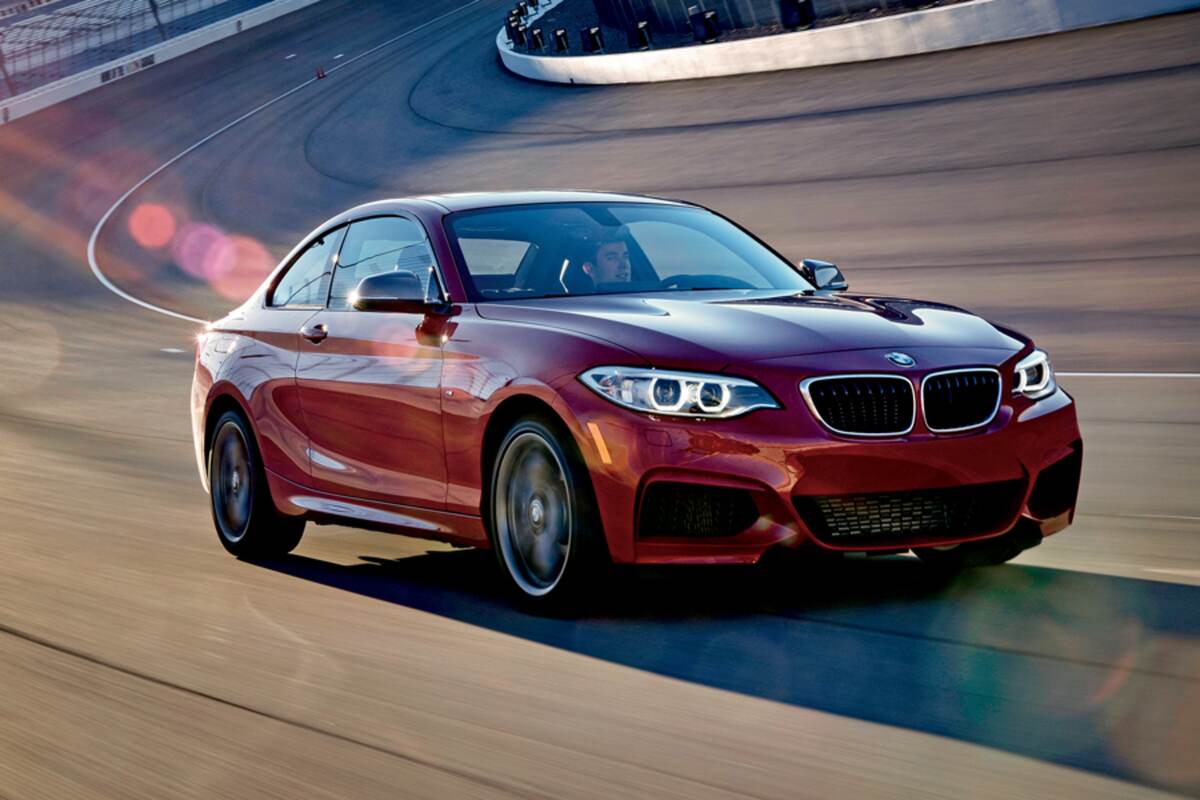 Let’s get one thing out of the way right from the start: This is not an M2 but an M235i, and it comes not from BMW M but from M Performance, BMW’s new sub-brand created to bridge the gap between the standard road cars and their high-performance counterparts. If we’d been in charge of nomenclature, it would have been called a 235is, but the significance of that moniker is lost outside the U.S., and in any case the “is” label lacks the obvious cachet of a tricolor M on the trunk lid.

“M Performance” may seem like mere marketing, but it also serves an important role within BMW’s overall product portfolio. By bridging the gap between the standard production BMWs and the M cars, it allows the M cars to evolve into ever-more-exotic track-day specials, with extensive carbon fiber and abundant aluminum as well as hard-hitting horsepower.

By comparison to the forthcoming M3 and M4, the M235i seems downright ordinary, but that’s just fine. A sport-tuned BMW has always been a fun car to drive, and this one is no exception. It may lack the hardcore appeal of the next-gen M cars, but it’s significantly less expensive, too, and it will likely prove easier to live with on the daily commute. Again, we’d call that an “is,” not an M, but whatever it’s called, the M235i is a sweet little coupe. 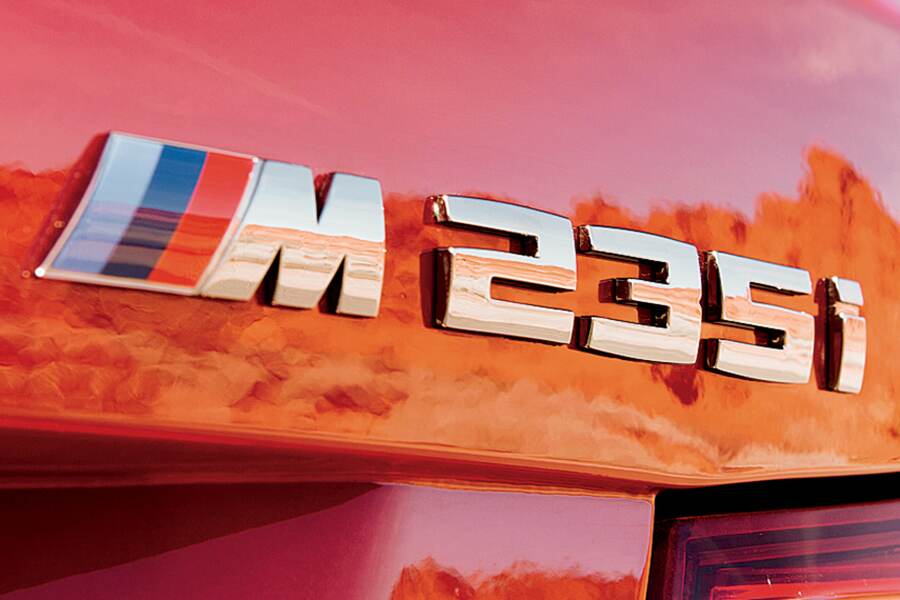 Not so little anymore

That said, it’s not quite so little as its 1 Series predecessor. In its ascension from 1 Series to 2, BMW’s smallest coupe has grown up, maturing into a more refined vehicle and expanding to more adult dimensions inside and out.

Comparing the new M235i to the outgoing 135is, overall length is up by 3.7 inches (or so we believe; BMW’s measurements for this dimension varied), atop a wheelbase that’s 1.2 inches longer and tracks that are wider by 1.8 inches at the front and 1.5 at the rear. It’s a bit heavier, too, by 162 lbs., with a slightly higher (by 0.6 percent) front weight bias. 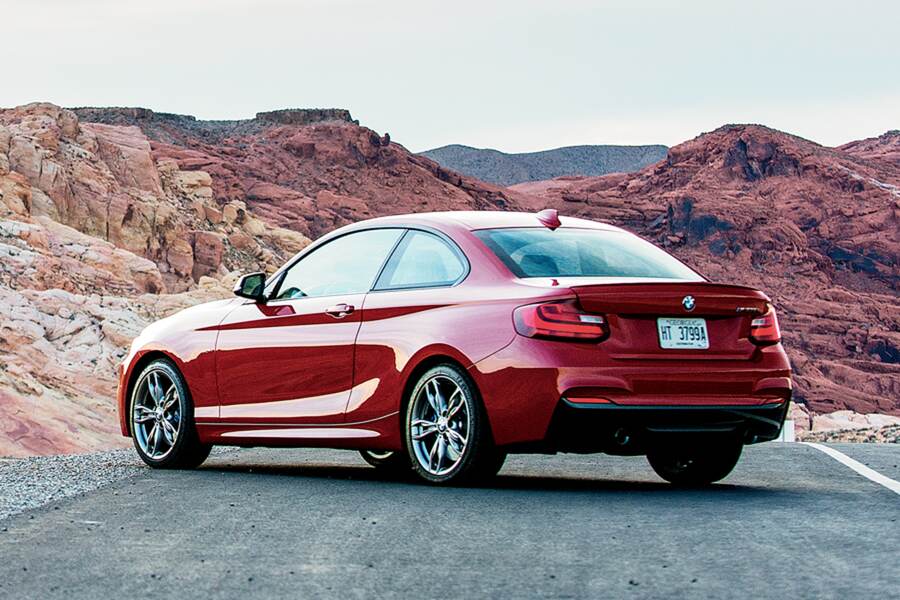 Among those figures, the longer wheelbase and wider track widths have the most obvious effect on the new 2 Series’ character. Whether as a 228i Coupe powered by the N20 four-cylinder or an M235i powered by the N55 six, the 2 Series will ride on a 105.9-inch wheelbase rather than the 1 Series’ 104.7-inch gap between axles. Those 1.2 inches make for a car that’s noticeably more stable at speed, albeit at the cost of some of the 1 Series’ agility. It’s not into 4 Series territory—it’s nearly five inches shorter than its upmarket cousin—but it’s no longer the hyper, hard-to-handle little hot rod it was as the 1 Series. The wider tracks help here, too, giving the car a much more stable footprint for lateral moves.

Though our test drive was short, taking place over just half a day, it included a few laps on the infield road course at Las Vegas Motor Speedway as well as the oval. While the oval told us little about the car’s dynamic properties, the infield road course provided some interesting information about how the car has changed in its evolution from 1 into 2 Series.

Pitch it into a sharp corner and it no longer pivots hard around its nose but stays flat, rotating around a point much closer to its center. Direction changes are still lightning-quick, but they no longer demand quite so much finesse…or such steely nerves. Engineer Klaus Fröhlich, who’s in charge of small car development at BMW, told us that the team worked hard to control the car’s tendency to oversteer accelerating out of corners, to make the transition to oversteer more gradual than it had been in the 1 Series and to make recovery easier for the driver. 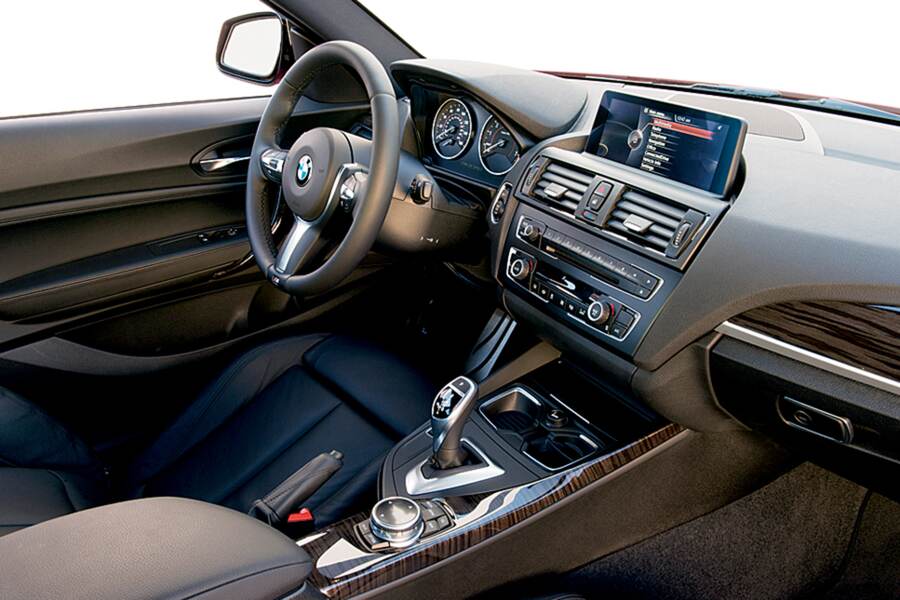 Neither does the car understeer quite so much going in, the extra wheelbase and wider tracks having added enough stability that the engineers could reduce that fail-safe handling trait. It doesn’t hurt, either, that the suspension is quite a bit stiffer, too, which also lets the car change direction more quickly by reducing weight transfer. Fast corners are still a bit sketchier than they would be in a 3 or 4 Series, of course, but they’re no longer quite so perilous as in a 135i.

There’s always a price to be paid, of course, and those who loved the 1 Series for its manic qualities will find the new M235i disappointingly tame, all the more so for the newfound presence of an “M” on its trunk lid. 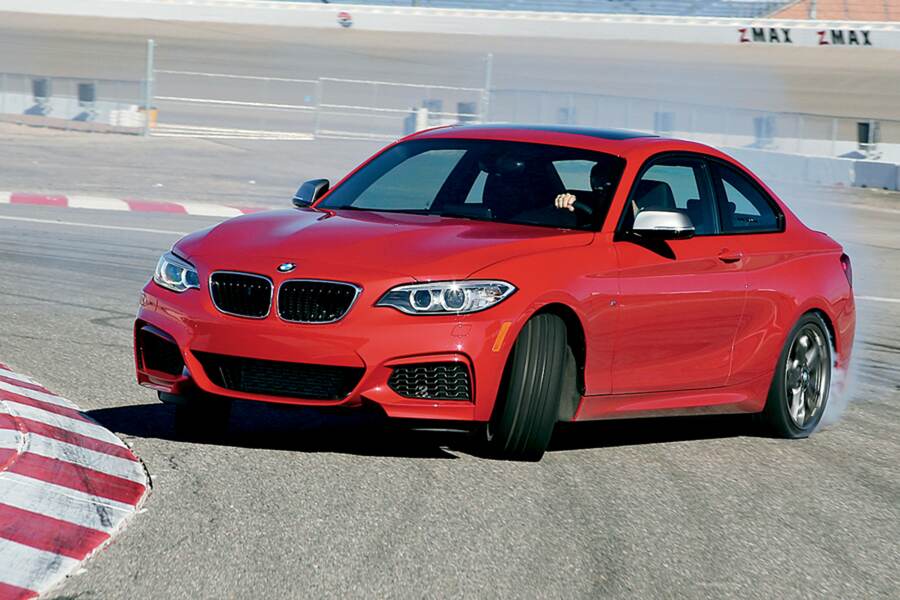 Under its hood, the M235i is more “is” than M. It’s powered by the familiar 2,979cc N55 turbocharged six seen in nearly every production BMW of recent vintage, here tuned to put out 320 hp and 330 lb-ft of torque. Though that can’t quite match the older twin-turbo N54’s 335 hp/332 lb-ft (as in Z4 35is), it marks an increase of 13 lb-ft over the N55 used in the outgoing 135is. With the M235i’s 162-lb. weight increase, it’s not enough for a noticeable improvement in acceleration; both cars dash from zero to 60 mph in 4.8 seconds. (That’s with the standard eight-speed sport automatic with Launch Control; choose the six-speed manual and it’ll take 4.9 seconds.) The engine works equally well delivering more leisurely acceleration, its power smooth and easy to use in perfect fulfillment of the M235i’s mission of everyday performance.

It does so to a soundtrack that’s almost more thrilling than the car itself. The M division tuned the M235i’s exhaust for a deep, raw tone that only gets better as revs increase, and its engineers tell us that it’s all natural, with none of the artificial enhancements BMW has been known to use on its standard production cars. Well, except for one: M wanted the car to make cool sounds on trailling throttle, so they inject a little extra fuel into the exhaust stream to give it the kind of burble on overrun that you’d have on a carbureted engine—silly, perhaps, but fun.

Like the exhaust, the M235i’s standard M Adaptive suspension was engineered by M, and it was designed to out-sport last year’s Euro-only M135i that we loved when we drove it for Bimmer #111. The spring rates are 10-15% stiffer than on the M135i, the bump stops are shorter and stiffer and suspension travel is a bit longer. More interestingly, the Adaptive M suspension now includes a second valve within the damper bodies for more precise control of the hydraulic fluid. One valve remains fixed in diameter, the other is adjustable between Sport+ and Comfort to suit the driver’s preferences or road conditions. The goal was to reduce roll while increasing ride comfort, and we’d say it was achieved. 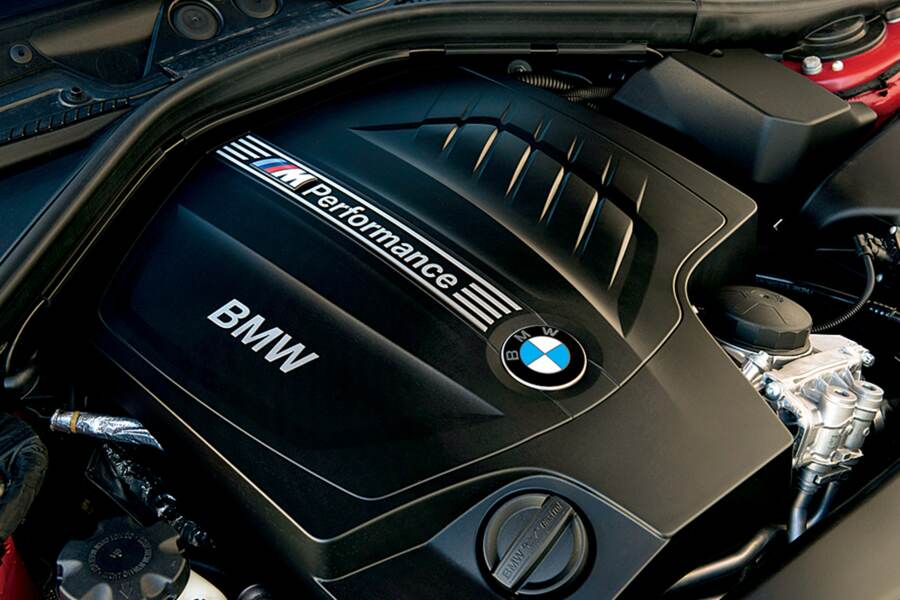 Regardless of how it compares to the M135i, the M235i feels noticeably better than the U.S-spec 135is where suspension is concerned. Riding on standard rather than run-flat tires (Michelin Pilot Super Sports that measure 225/40-18 front and 245/35-18 rear), it feels more comfortable and compliant on real-world pavement, yet it’s stiff enough to hang together when you wick it up a notch or two. There’s some body roll, for sure, but the stout low-speed damping rates and finely tuned bump stops keep movement so well controlled that transitions come quickly, with little waiting between direction changes.

That stiff damping also keeps the car under control during fore-and-aft and up-and-down transitions—we skipped the prescribed street route in favor of the twisty two-lane that leads to the Valley of Fire State Park just north of LVMS, and the M235i really proved its mettle through the whoop-de-dos and camber shifts of this challenging backroad. This sort of road was always the 1 Series’ forte, and it’s nice to see that BMW’s smallest coupe is still right at home in one of our favorite driving environments.

Driving the M235i on that backroad left us eager for more time in the car than did driving it on the track. With such fluid responses and graceful handling, this car feels like it was made for great California backroads like Highways 192 and 58, and we can’t wait to get it out there for a full day’s driving. We also can’t wait to try it out with the optional limited slip differential that wasn’t available at the press launch; effective though DSC/DTC and an electronic locking diff may be, there’s something about mechanical limited slip that makes a car that much more tactile and responsive under power. 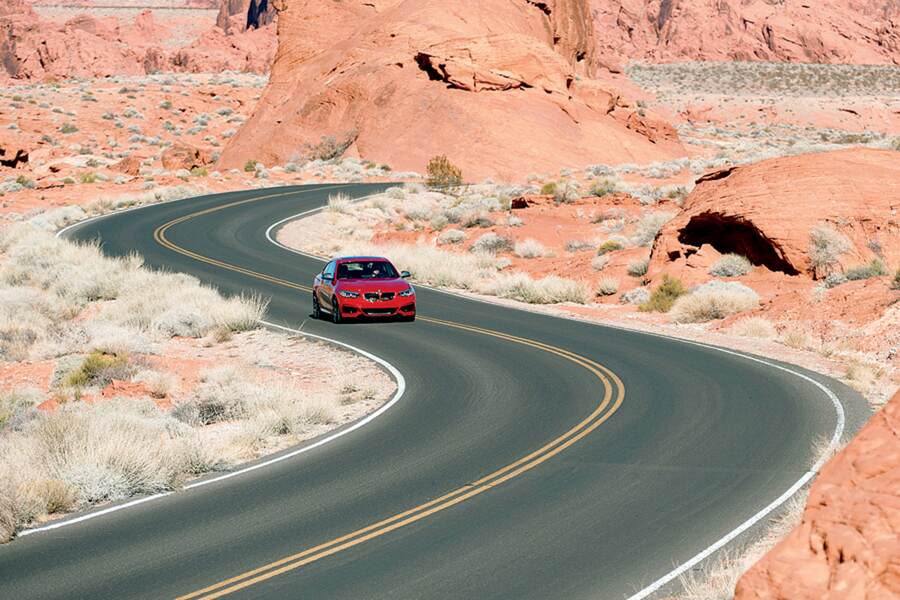 Most great backroads are located in somewhat out-of-the-way locations, and getting there will prove considerably more comfortable in the M235i than it was in the cramped cockpit of a 1 Series. BMW says there’s 0.1 inches more headroom and 0.8 inches of additional legroom, and it felt like we had more shoulder room, as well. In terms of its size, the cockpit felt identical to that of an E36 3 Series, and so did the trunk, which is bigger than the 1 Series’ by a noticeable 20 liters.

More importantly, the M235i’s interior feels markedly better in quality than that of the 1 Series, with nicer materials and parts that seem more precisely put together than those in the outgoing car. Everything feels good to the touch, especially the perfectly sized leather-wrapped wheel that controls the electrically assisted steering—which is just fine by our initial estimation, though the naysayers will inevitably find fault with it. It could certainly be meatier and more feelsome, but it didn’t feel numb like the steering on, say, a recent 5 Series. 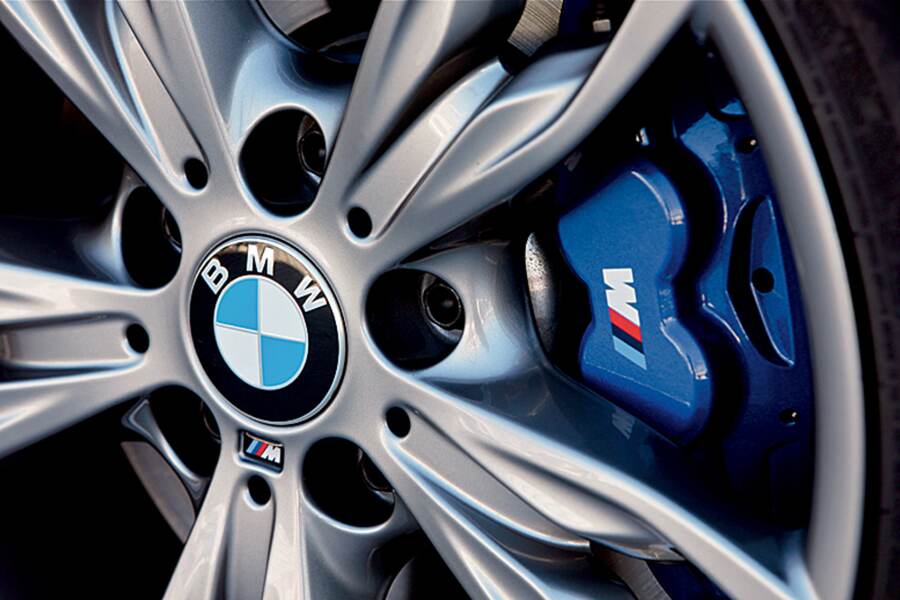 Glancing at the spec sheet for all four new 2 Series shows a distinct advantage in this area to the manual transmission 228i, which spreads its 3,260 lbs. equally over both axles. Light weight and perfect balance make for optimum handling, and the 228i just might outpace the M235i where real-world driving fun is concerned.

Configure a 228i as an M Sport model with a limited slip differential and you’ll have a brand-new BMW that won’t have the M235i’s 320 horsepower or M badge on the trunk but might be more fun to drive. Even if it isn’t, it will certainly be more honestly named. 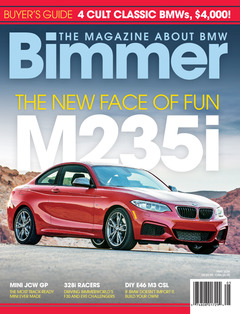