Led by the astonishingly effective Laser Lights, BMW’s latest cavalcade of technologies illuminates the future of automobile construction and propulsion. 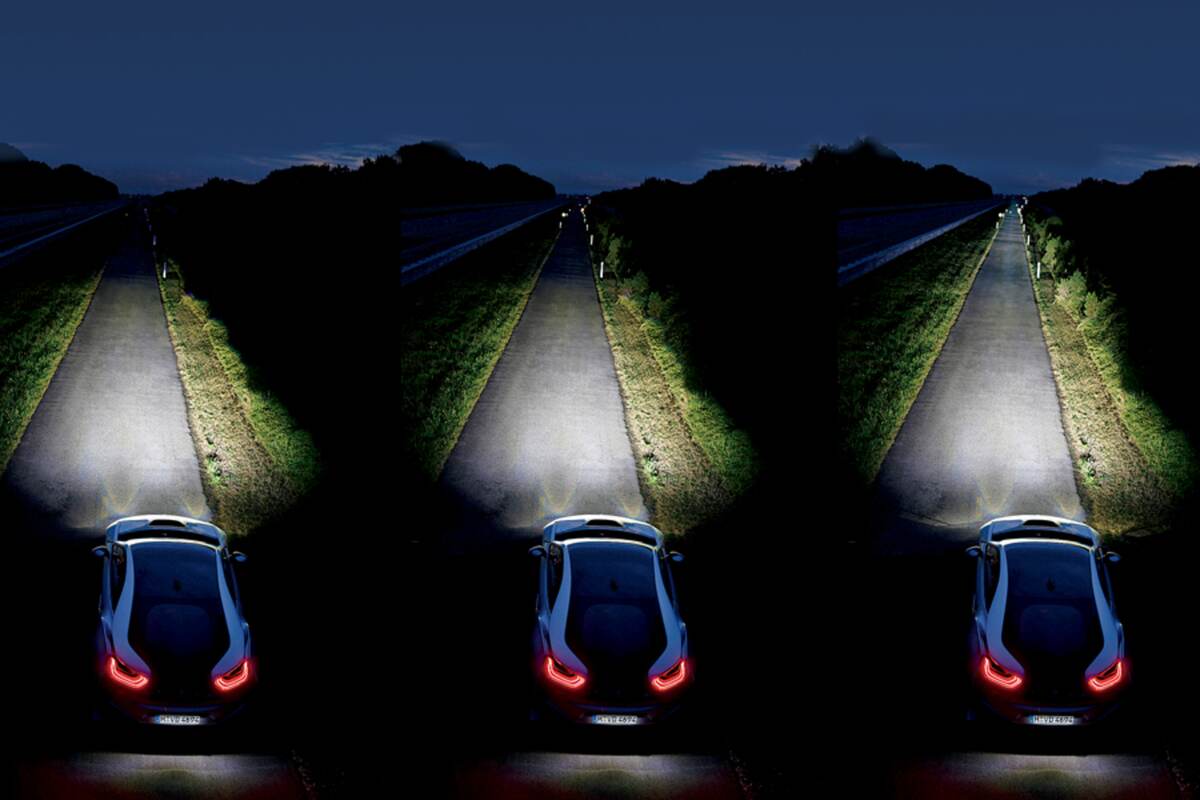 It’s 8 p.m. on a late winter evening, and we’re in southern France, sitting in a BMW sedan parked on a rural road. Its LED headlights illuminate the pavement up ahead as well as the tree trunks alongside it. It’s bright, much more so than halogen could achieve, and crisper than even Xenons.

As the driver puts the car in gear and we begin moving forward, the LEDs are augmented by BMW’s new Laser Light high beams, taking nighttime illumination into another dimension. It’s as if we’ve driven into daylight. Not only is the road ahead visible for an astonishing 600 meters (1,968 feet), around twice as far as the LEDs can illuminate, the amount of information being provided is staggering. We see not just the pavement and the tree trunks but the branches overhead, and enough of the surrounding area that we can tell not just where we’re going but where we are. What’s more, the light itself is the same color as daylight, making it feel natural and easy on the eyes.

The only time it’s a problem is when we come upon a reflective road sign; in France, they use black letters against a reflective white background, and the lasers put out so much light that the background is all we see. As the lasers constitute high beams, it’s easy to switch them off momentarily, and BMW’s engineers say they’re working on a solution. Most probably, they’ll end up dialing down the output, which they’ll have to do anyway to meet U.S. lighting requirements. Lasers will arrive in this country in late 2014 as standard equipment on the i8, and Federal standards limit output to 120 lux while the EU permits as much as 344. (Lux is a measure of light that takes into account the area of light as well as the amount, measured by itself in lumens.) Even dimmed down a bit, lasers will outperform LEDs by a significant margin, providing not just more but better light, and using about 30% less power to do so.

Along with the problem of too much light on reflective surfaces, BMW’s lighting engineers also had to address the effect of laser lights on those outside the car, specifically oncoming traffic and vehicles up ahead. BMW had already developed an auto-dimming function for its LED and Xenon high beams, and that technology is used here, as well. Laser high beams, however, can be left on while following another car in the same direction, because the system redirects the beams to either side of that car rather than straight ahead into its mirrors. 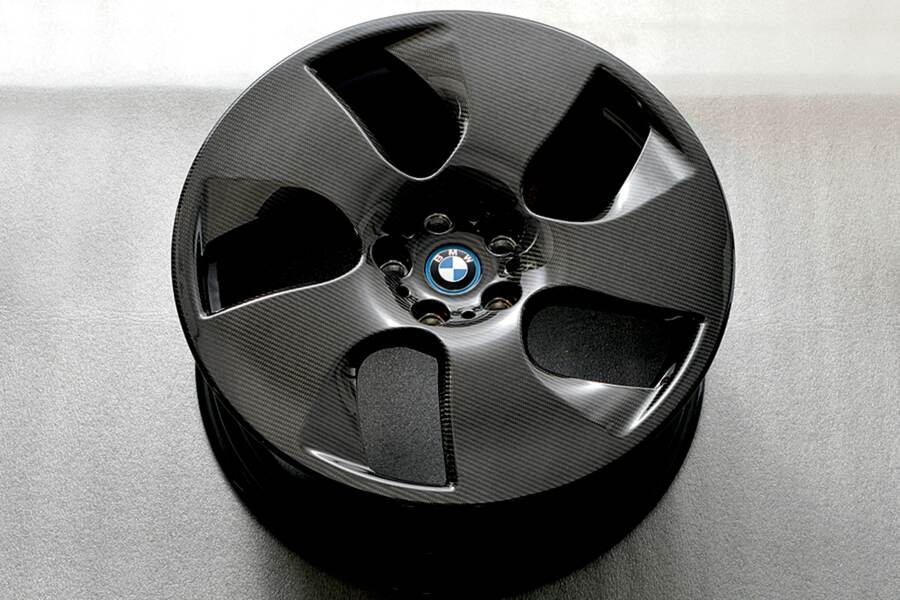 Other safety features ensure that the laser light itself never leaves the box, so to speak. Lasers can be used like scalpels when aimed directly at an object, so BMW sends the beam through a phosphorous plate that converts the blue laser into light in the proper spectrum while secondary optics redirect it down the road. In case of an accident, the laser remains safely contained within the headlight, and it should turn itself off before it can burn or blind anyone.

Laser lights may have been the most dazzling technology on display at BMW’s Innovation Day 2014, but they weren’t the only one, nor were they the only new technology to trickle down from the i cars.

Enthusiasts have been complaining for years that BMWs have become too heavy, but the i cars’ mainstreaming of carbon fiber construction looks set to change that. It’ll be some time yet before everyday BMWs are built entirely of the black stuff, but crucial parts are already being constructed out of this lightweight material. We’ve seen a few of these on the forthcoming M3 and M4, which will get carbon driveshafts as well as the more familiar carbon fiber roof. 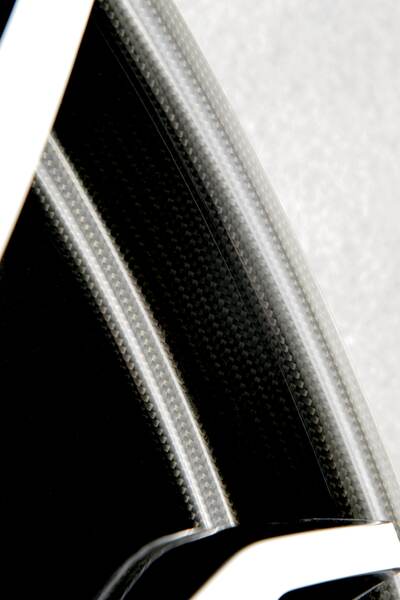 Here, we were more interested in a carbon fiber part few people will ever see: the dash support that extends across the car’s interior from A-pillar to A-pillar, and which forms a vital part of its crash structure. (You won’t see it in the car, and you can’t see it here, either: BMW prohibited photography, and a photo of the part wasn’t provided. In lieu of a photo, imagine a dashboard-shaped part molded in black, with a lot of bosses where interior parts might be bolted onto it.)

The dash support takes advantage of BMW’s newfound expertise in working with carbon, and it also puts carbon fiber “recyclate” to use in its construction. It’s made from granules the size of rabbit pellets that are left over after the i cars are produced, which would otherwise go to waste if BMW weren’t repurposing them for parts like this.

This dash support advances the technic beyond that of the i cars themselves, which have a dash support made from lower-tech magnesium. That’s lighter and stronger than the usual steel, but it isn’t nearly as high-tech as carbon for this purpose. Carbon is lighter still, and its fibers can be configured for incredible strength in the specified direction—crucial to a part providing impact resistance.

While it might seem that pellets of carbon fiber would lose that ability, their fibers remain long enough to be aligned, yet the material is also fluid enough to be injection molded in the manner of polycarbonate or molten metal. A complex casting to which other parts need to be attached, the dash support is charged with holding up nearly everything in front of the driver, and it needs to accommodate things like instrument panels, heater vents, etc. It also attaches the steering column to the chassis, and thus it makes a crucial contribution to steering feel. 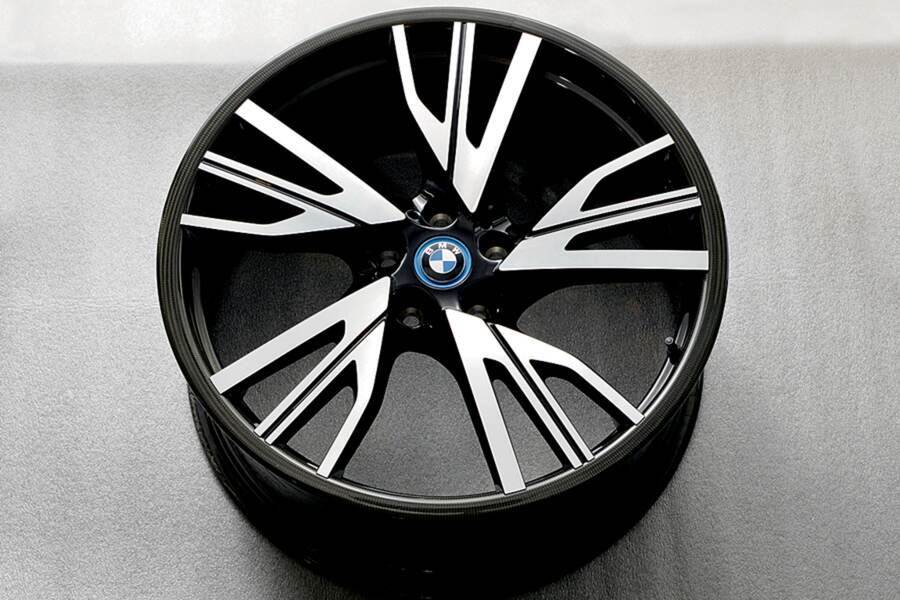 Carbon fiber, as it turns out, can be “tuned” not only for directional stiffness but for its damping properties, another reason BMW is considering it for wheels as well as other parts. Lightweight carbon is a no-brainer for reducing unsprung weight and rotational mass, and it can also make a significant contribution to ride quality.

“It’s all about feel,” said Dr. Gero Kempf, the engineer in charge of pre-development technology. “Think carbon fiber bicycles and you’ll know what we mean.”

So far, BMW finds the carbon fiber rim bolted to a forged aluminum center to provide the best solution. Compared to a wheel made entirely of forged aluminum, this combination reduces weight and improves ride quality while being more cost effective than an all-carbon wheel. It’s also easy to repair a modular wheel if either the hub or the rim is damaged, and all-carbon wheels could also be built this way.

Beyond dash supports and wheels, other near-future applications for carbon fiber include seat frames and instrument panel frames, which could be made up to 30% lighter with injection molded carbon offcuts. 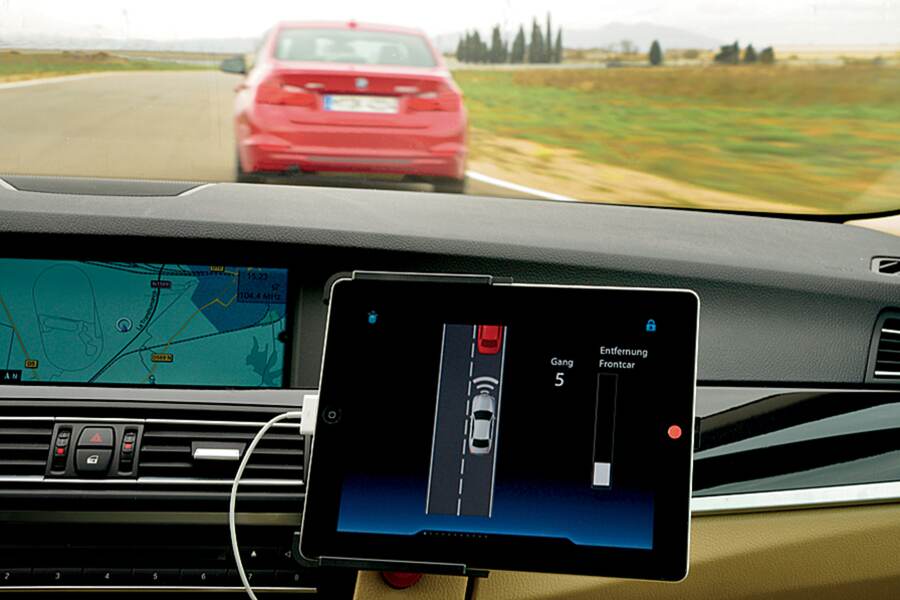 Compared to laser lights and carbon fiber support structures, the rest of BMW’s new technology seemed a bit meh. In truth, however, it will make driving more efficient, safer and even more fun, at least for those who enjoy a finely executed pass.

That would include just about everyone who reads this magazine, a group that also tends to prefer manual transmissions to automatics. We like manuals for their superior driver engagement, and also for the greater measure of control they provide. Specifically, manuals allow a driver to select the correct gear not only for what’s happening now but also for what’s to come, which a human driver can anticipate but an automatic transmission cannot.

Or at least it couldn’t…until now. BMW is already using predictive drivetrain management on its hybrid powertrains, using navigation data to shift between electric power and the internal combustion engine in anticipation of grade changes, urban vs. rural settings, etc. That’s all well and good, but it doesn’t work if you don’t program your route into the navigation system, and it doesn’t take into account what the driver is doing or what’s happening around the car. 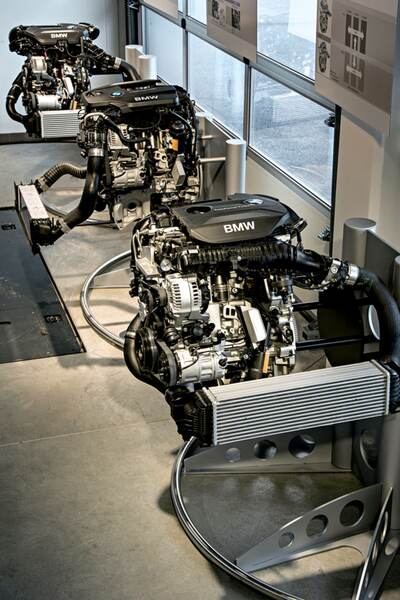 The next step takes GPS out of the equation and relies on radar/camera data and behavior analysis to make an automatic transmission do what a driver would do for him or herself with a manual: downshifting for maximum acceleration in anticipation of corner exits and passes, to maximize braking efficiency or to avoid danger.

BMW’s cars are already equipped with cameras and radar, which they use for parking assistance, active cruise control, lane departure warning and blind spot detection. Now BMW is using those tools to determine when you might want more acceleration—say, when you activate your turn signal while a vehicle is directly ahead or in the next lane. In that case, it’ll drop the transmission a gear or two in anticipation, making sure you’re in the right gear for a pass even before you’ve started to make it. The transmission doesn’t wait to kick down until the driver demands acceleration, nor does it require the driver to waste gas flooring the throttle to achieve maximum engine response. And if you decide not to make the pass, it’ll kick back up a gear or two to save fuel.

It feels totally seamless in anticipation, and it definitely aids acceleration. It’ll be available soon, too, perhaps on facelifted versions of current-generation BMWs.

The internal combustion engine is so 19th-century…yet it’s still being developed for greater efficiency. In the case of BMW’s new engine family, “efficiency” refers not only to engine performance but to engine production: New modular construction lets these engines share more parts and processes than ever before, making them cheaper to produce without compromising quality.

Some 60% of the parts used to build an engine are now common to the three-, four- and six-cylinder engines, and 30-40% of the parts are interchangeable between BMW’s gasoline and diesel engines, allowing them to be built in the same factory. Interchangeable parts include oil pumps, sumps and engine blocks. The latter have been designed so that they can be mounted both longitudinally, as is traditional on BMWs, or laterally, as might be required in new configurations.

These new engines are already in production, installed in the new MINI reviewed on page 53. If the performance of the MINI’s new three- and four-cylinder engines is any indication, there’s plenty of life left in the old internal combustion engine after all! 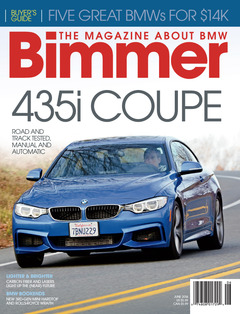