Its Jet Black paint set off by Inka Orange details, Nick DeClemente’s E46 M3 Convertible is a distinctive drop-top whose performance is a perfect match for its subtly stylish looks. 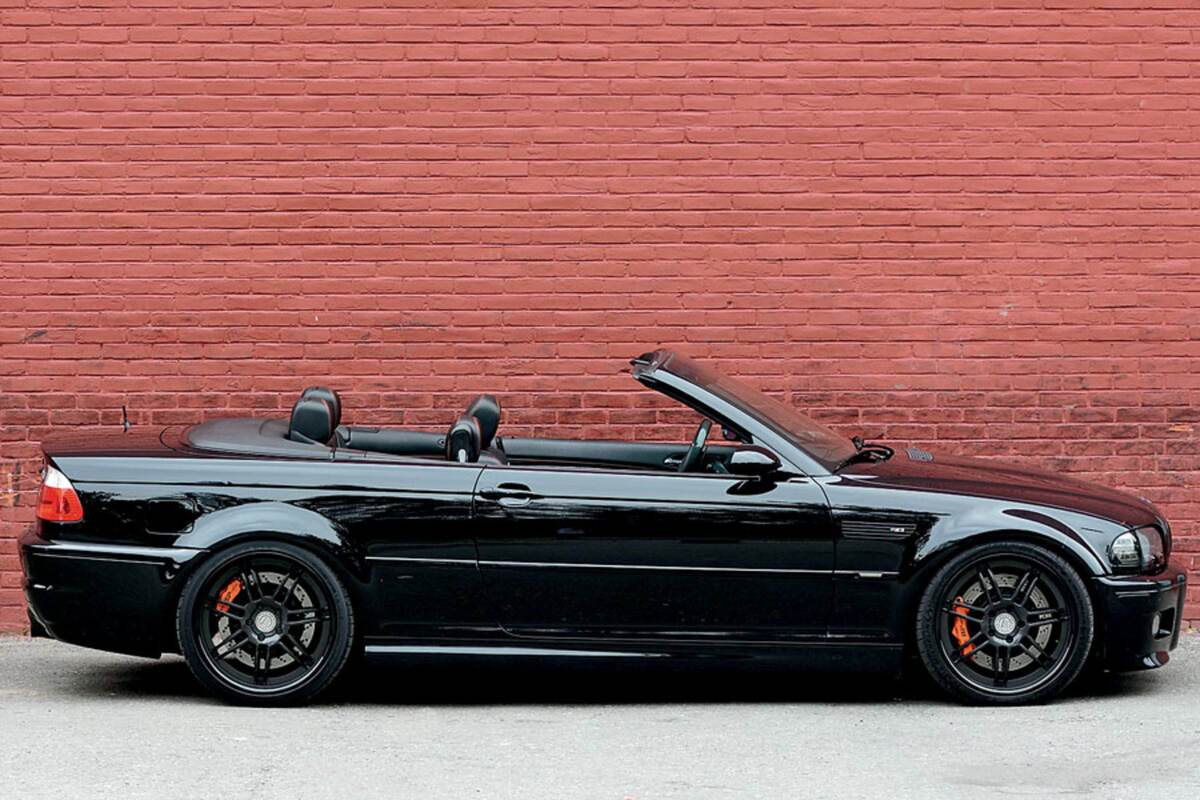 We don’t come across modified M3 convertibles very often, as the tuning crowd tends to gravitate toward fixed-roof cars. Neither do we see many M3 convertibles in the Northeast, which makes Nick DeClemente’s E46 M3 convertible a doubly rare sight. Even if it weren’t rare, DeClemente’s drop-top M3 would be distinctive: It not only has the usual complement of go-faster parts, it also has some unique styling mods that separate it further from the herd.

When DeClemente decided to lease a new BMW at the end of 2006, the last year of E46 production, he had his heart set on a black E46 M3 coupe but had to settle for a convertible instead.

“I really wanted a coupe more than a convertible, but I couldn’t find a black coupe anywhere that was new,” says DeClemente. “The M3 convertible was one of the last that were available, as there weren’t many around at that time. I had to pick it up in New Hampshire, so I got a one-way rental from Hertz and drove up to Nashua to get it.”

DeClemente used the M3 as his daily driver for the entire 28-month lease period, logging around 30,000 miles that included commuting into New York City from his home in Westchester County. He’d planned to return the M3 when the lease ended in April 2009…until he was given an offer he couldn’t refuse. 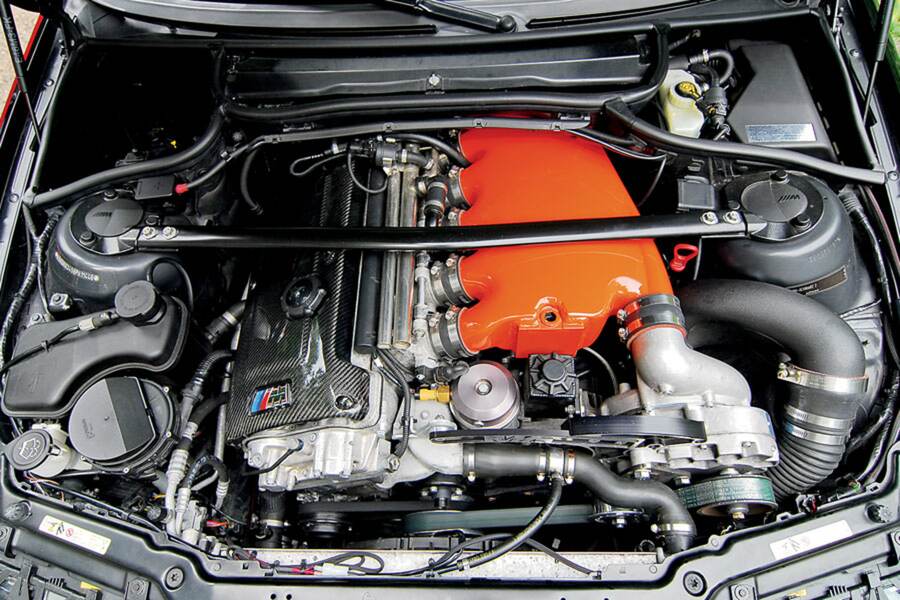 “The dealer ended up giving me an insane deal to buy the M3, and I had been bitten by the convertible bug after driving it for a couple of years,” he says.

The car had remained virtually stock but for a muffler replacement throughout the lease period, but once DeClemente owned the car he began to plan some simple upgrades. As so often happens, those simple upgrades turned into a much more substantial makeover.

“At first I swore that I would only do bolt-on upgrades like wheels, full exhaust and headers,” he says. 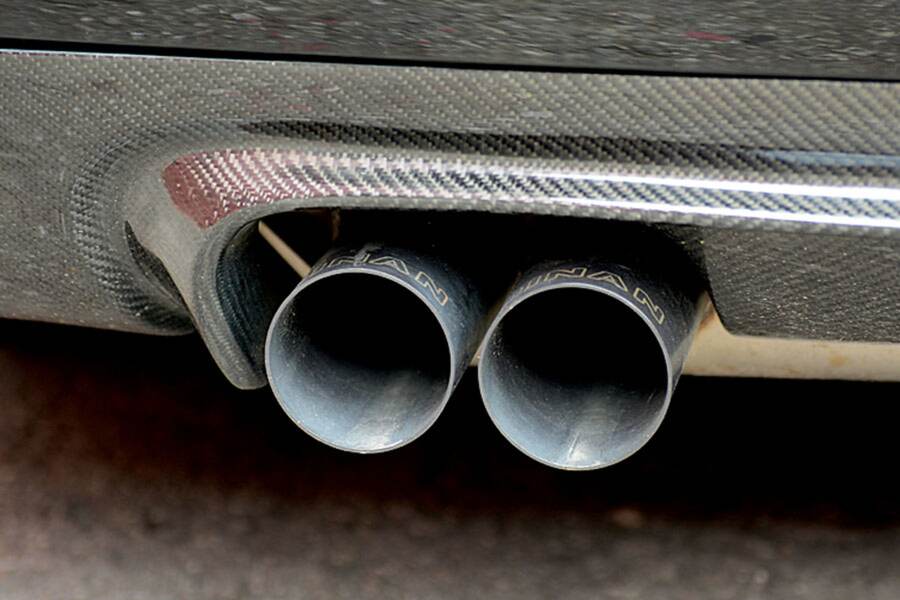 He did indeed start with wheels, but not just any wheels would do.

“The first thing I got were the 360 Forged wheels,” says DeClemente. “I had only seen one other set like them, and when I called the company right after I bought the car they told me the wheels were twelve grand. I negotiated the price down so that they were a lot less than that, and they built them as a one-off set for the M3.”

The three-piece wheels are produced and hand-assembled at the 360 Forged facilities in Miami. Measuring 9.5 × 19 inches front and 10.5 × 19 inches at the rear and shod with sticky Michelin Pilot Super Sport tires (245/35-19 front, 275/30-19 rear), the 360 Forged wheels look quite striking in carbon fiber and aluminum, but they don’t leap out as wildly ostentatious to the casual observer.

Once the wheels were on the M3, the more extensive work began. 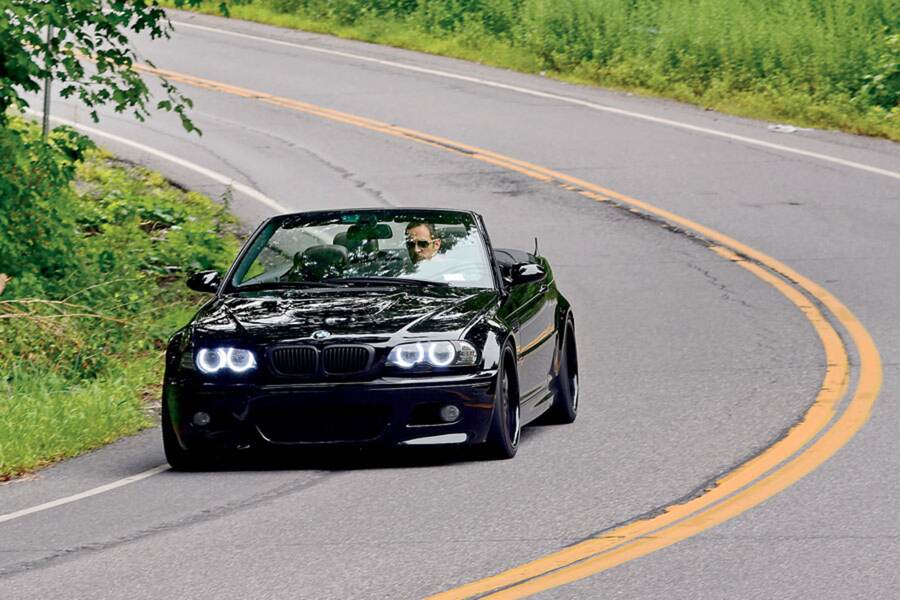 “By that time, I had started to do some car shows and wanted to make the M3 something unique,” he says. “I grew up around guys who were more old school car guys, where form needs to follow function. I wanted to put the M3 together in a way that was maybe a little old school, that’s very sorted with a specific and consistent approach. Right now, car culture is so over the top, but I wanted the M3 to be a very drivable and usable car. I wanted it to be a car that you can go out and drive hard without worrying about it.”

After the wheels, the suspension was first in line for upgrades. Handling was improved with a Bilstein PSS10 coilover kit with ten settings for compression and rebound damping. The car was also fitted with a Rogue Engineering front anti-roll bar that measures 31mm instead of the stock 26mm, Rogue camber plates and stiffer front control arm/rear trailing arm bushings.

Next, the exhaust system was replaced with an entirely new and less restrictive system, though it took some trial and error.

“I went through a few different exhaust iterations to get it right,” says DeClemente. “Right now, it has BimmerWorld headers with jet-hot coating, Rogue Engineering first and second sections and a Dinan rear section. The Dinan rear section is loud, but it’s not super-obnoxious and doesn’t drone.” 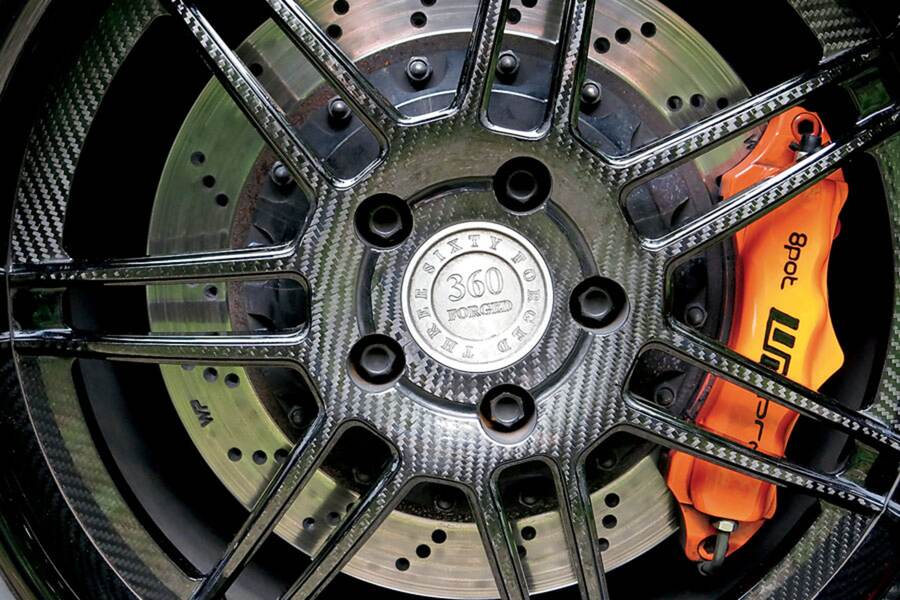 The Rogue pipe is designed to get rid of the E46 M3’s trademark raspy exhaust sound, as well, so DeClemente’s car neither drones nor rasps.

To upgrade the brakes, DeClemente went with a big-brake kit from WP Pro that uses eight-piston front calipers up front and six-piston calipers at the rear, all made from T6061 forged alloy, with 360mm drilled two-piece rotors on all four corners. WP Pro also worked with DeClemente to paint his calipers in a color that will be appreciated by BMW fans.

“By total chance I found WP Pro, who used to make OEM parts for other companies, and they said if I put their brakes on my car they would give me a good deal,” says DeClemente. “The calipers were originally going to come in an amber gold color and were anodized, but I was concerned that anodized calipers wouldn’t last in New York with salt on the roads. I saw a 2002 in Inka Orange in a magazine and liked the way it looked, so I decided on orange for the calipers. I like that it keeps the color in the BMW family and is kind of a throwback color.” 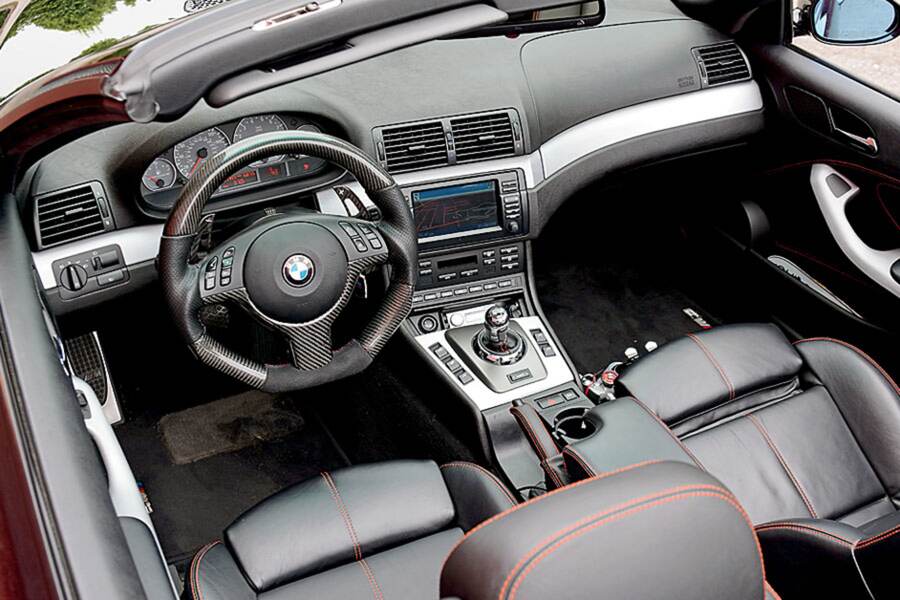 The S54 six-cylinder has proven amenable to performance upgrades over the years, and DeClemente wasn’t afraid to do a bit of work under the hood. In 2010, DeClemente bought a Race Marque Systems (RMS) Stage 2 supercharger, which uses a Vortech V2 Si trim blower, then waited two years to put it on.

“I was hemming and hawing,” he says. “I did a lot of research and talked to probably two dozen mechanics about it. I worked as a mechanic when I was in college for an old-school European car mechanic, so I was really sensitive to the level of work that was involved. I didn’t have a garage at the time, and I’d never done a supercharger kit before; in that tight space, you really need to know what you’re doing. I looked around and finally ended up taking it to Rogue Engineering in New Jersey to get it installed.”

The RMS kit features an air-to-liquid aftercooler manifold that allows the intake air to be charged even while the car is sitting still, so the car will be more responsive as soon as you get back on the throttle; the kit also features a front-mounted heat exchanger. A heavy-duty bracket made of aircraft-quality aluminum plate mounts the supercharger to the engine to reduce flexing.

Other upgrades to support the supercharger include Bosch 50 lb/hr injectors, a Bosch high-flow fuel pump and eight-rib supercharger and crank pulleys. The intake manifold is painted in the same Inka Orange as the brake calipers, set off nicely by a carbon fiber valve cover from Bimmian. 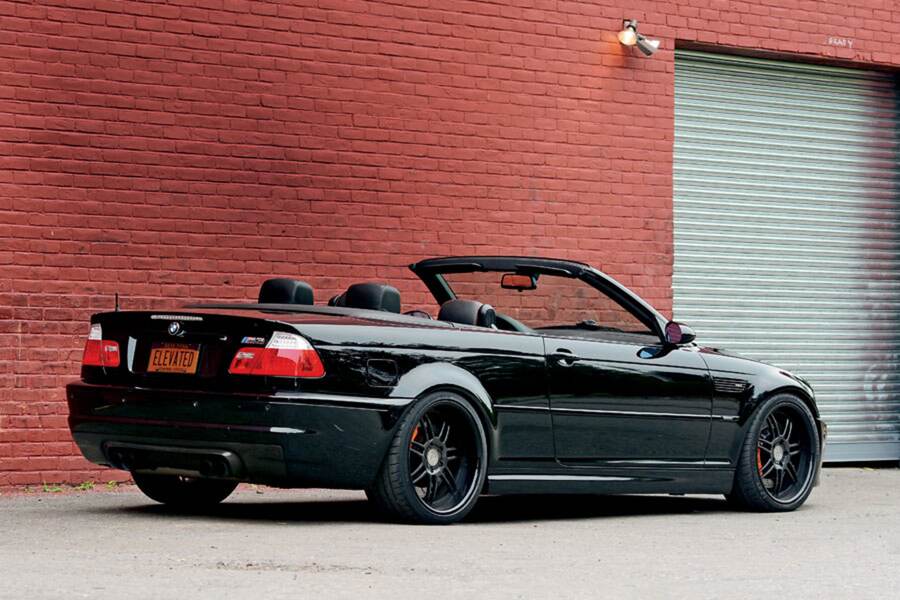 Engine management is done on the factory ECU, and the end result is 444 hp (at the rear wheels) at 7,500 rpm and 337 lb-ft of torque at 6,200 rpm, which is up substantially from the 333 hp/262 lb-ft of the stock E46 M3 (measured at the crank, prior to the 15% parasitic loss through the drivetrain). To handle the increased power, the car uses a heavy-duty differential gear set whose 4.10:1 ratio in place of the stock 3.62 also improves acceleration.

DeClemente‘s car still wears its original Jet Black paint, now touched up with black kidney grilles and side vents, upgraded lighting and a carbon fiber exhaust surround. In the cockpit, Inka Orange stitching on the seats, doors, armrest and shifter boot echoes the Inka Orange of the brakes and intake manifold. It wasn’t an easy swap: Every stitch was removed and replaced by hand.

Other nice touches include a fat AutoCarbon steering wheel of carbon fiber, leather and Alcantara along with carbon fiber SMG paddles. A custom rear view mirror displays information like supercharger boost and oil pressure. The stereo system was also completely upgraded, the components in the custom finished trunk painted in Inka Orange by T.S.B. in Glen Head, New York.

At first glance, DeClemente’s M3 doesn’t look much different from stock, but the more you look at it the more you notice all the upgrades and the details. In my opinion, this is the best approach to take with a tuner car, retaining a more or less stock look and character while making meaningful improvements where it counts.

There’s no question when you put your foot into the throttle that this car has 100 hp more than the stock M3. It pulls hard and strong, with boost coming on at around 3,800 rpm and great sounds from the exhaust. The handling is buttoned down, but it doesn’t deliver a jarring or uncomfortable ride. It took some fine-tuning to get the car where it is today; a retuning by Technica Motorsports in Atlanta has made the car run more smoothly while making it easier to drive in traffic with the SMG transmission, which has held up well with the power increase.

It’s clear from a walk-around that DeClemente reached his goal of making the M3 more distinctive. Driving it demonstrates that he also raised the performance level substantially while retaining levels of comfort and usability that make it so nice to drive.

He no longer uses it for commuting but still drives it often enough to have put on more than 20,000 additional miles over the last few years. Some of those miles have been accumulated driving to car shows, and the M3 has won a few awards. DeClemente still has a short to-do list for the car, with a carbon fiber CSL trunk lid and a new paint job possible in the near future, as well as new rod bearings and bolts that will allow the supercharged engine to rev a little higher. All of that would fit in well with what he’s done already, but this M3 is fine as-is, too. Well done! 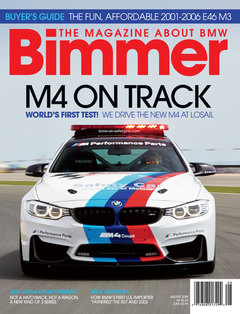