To the clouds, cheaply 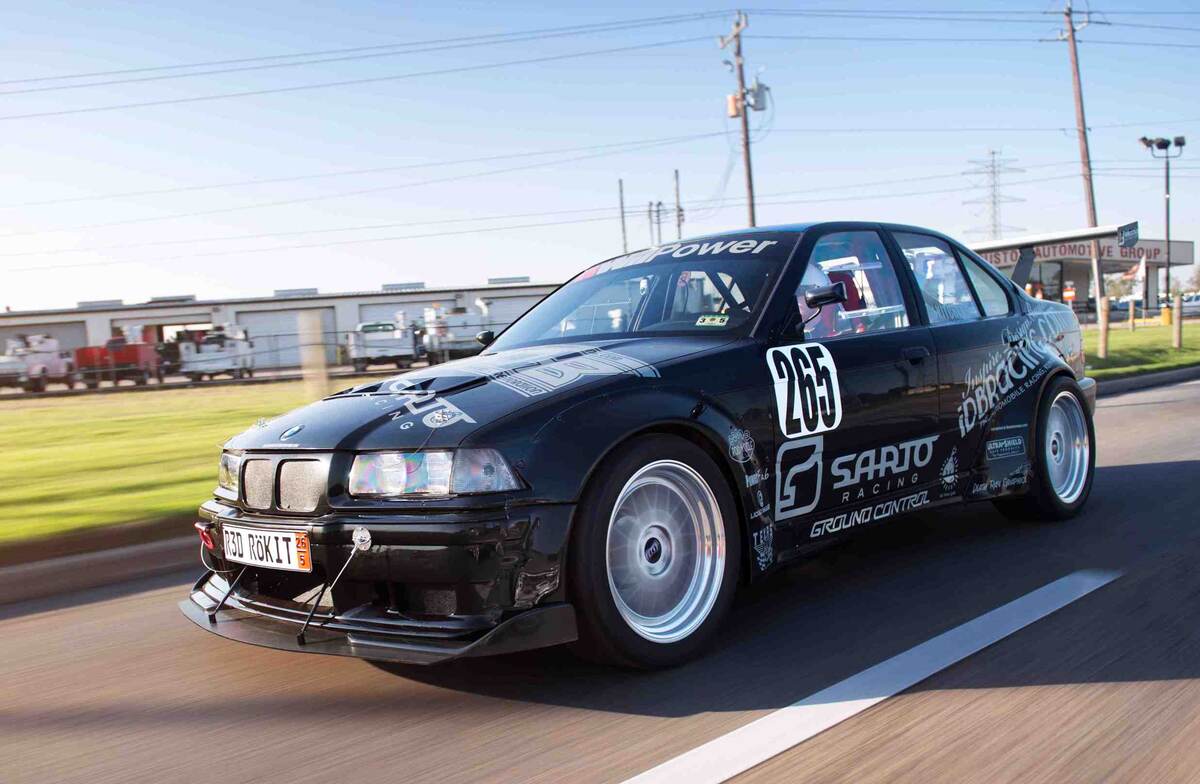 Story by David Do

Starting at 9,390 feet above sea level and climbing to 14,115 feet* at the finish, the Pikes Peak International Hill Climb is also known, appropriately enough, as “The Race to the Clouds.” At those altitudes, racers may encounter extreme temperature changes, sleet, hail, wind, thunderstorms, fog or even snow. And what the racers have to endure, so must their vehicles, whether cars or bikes. It’s what makes the second-oldest race in the U.S. one of the most challenging, as well.

In the summer of 2012, Houston’s Wil Kitchens entered his first Pikes Peak hillclimb on two wheels. He’d been racing motorcycles for several years when he decided to give Pikes Peak a try on his Aprilia.

“I ended up with my Aprilia SXV450 almost by accident, and while it was about as reliable as a condom made out of tissue paper, when it did manage to run it sure was a hoot to ride.”

Kitchens finished 27th of 28 riders in the 450cc class that year, but he wasn’t discouraged. He went back to watch the action the following summer,and while hanging out in Colorado Springs hatched a plan to attack Pikes Peak on four wheels.

“While in the bar at the host hotel for the 2013 hill climb, I found a beat-up, worn-out 1997 E36 M3 on Craigslist back in Houston,” Kitchens says. “I immediately made arrangements for my friend who owns a wrecker to go pick it up.”

Paying just $600 for the stripped, salvage-title M3 sedan, Kitchens had the car hauled to his IDB Racing performance shop in Houston. He was working on a tight budget, but he wanted the car to incorporate aggressive styling nonetheless, something that would make it stand out from the field while also being functional enough to turn in a competitive performance.

Beefing up the M3 all around

Next, IDB rebuilt the S52B32US engine to make as much reliable horsepower as possible, installing an M50 intake manifold (which flows more freely than the S52 part and liberates a few hp and lb-ft at the top of the rev range), Bosch 24-lb. injectors and a mass air flow meter sourced from a Porsche 911, plus a Mishimoto radiator and SPAL slim fan to keep things cool. Finally, Eurocharged Performance in Houston tuned the engine to perfection.

“If we run into some extra money before the race, I’ll be doing major internal work and a big turbo to try and make 800 hp,” Kitchens told us. “Otherwise, that’s the plan for next year.”

The engine was reinstalled with BimmerWorld’s solid aluminum mounts, which also attach the M3’s stock S5D 320Z five-speed transmission through a RevShift solid guibo. Inside the gearbox, an AKG Motorsport Stage II solid shifter with DTM shift rod eliminates the sloppy shifting to which the S5D 320Z is prone.

At the rear axle, the M3’s brakes were left stock. Up front, the original 315mm rotors were upgraded with a set of 345mm rotors sourced from an E46 M3 CSL, clamped by a set of four-piston calipers from a Porsche 996 Turbo instead of the stock single-piston BMW calipers. RallyRoad brackets hold the front calipers in place, while RallyRoad stainless brake lines carry fluid. Hawk DTC60 pads supply friction at all four corners, and Hard Motorsport’s brake duct and backing plate cooling kit helps prevent fade.

Outboard of the brakes, the car rides on a set of 10.0 × 18-inch BBS LM-replica wheels mounted with BF Goodrich G-Force R1 tires that measure 275/35-18; a set of Motorsport-tech wheel adapters increase track width by 2.0 inches up front and 3.0 inches at the rear for more stable handling.

For safety, the M3 was equipped with a Kirk Racing six-point roll cage, ACW Motorsports Lexan windows, an Ultra Shield Full Containment racing seat/five-point harness mounted on Macht Schnell seat plates. An NRG steering wheel, hub and quick release replace the original airbag steering wheel. Kitchens himself was protected by Ultra Shield Race Products and a HANS device—all of which came in handy on the mountain, as we’ll find out later. 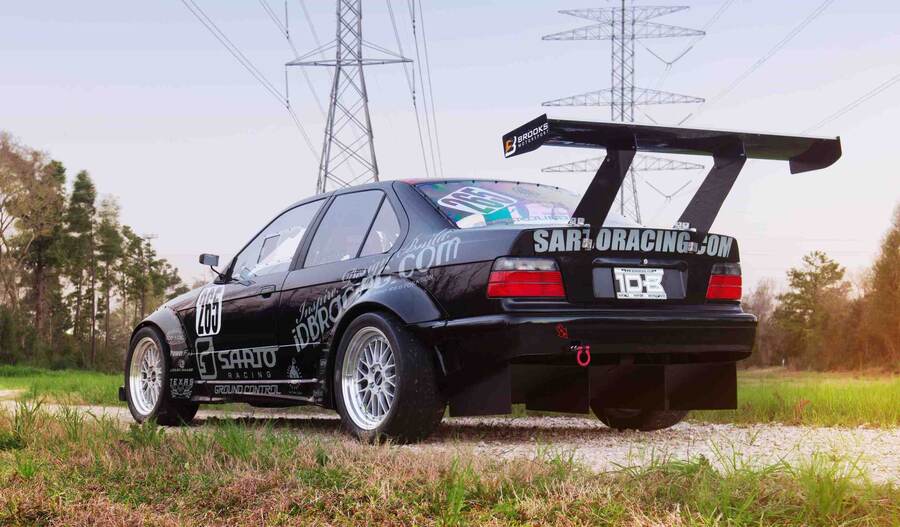 “When we first took it out to the track, we left the wing off so that we could get a sort of baseline as to how the car handled without aero,” Kitchens said. “The only issue we really had was keeping the rear planted—it wanted to step out under power. Once we got the wing and the underbody aero panels on, the car was planted. It doesn’t have a whole heck of a lot of power, so it’s really hard to overdrive the car, but it’s like driving a video game.”

Pikes Peak is no video game, of course—racer/adventurer Bill Caswell dubbed it “the most dangerous place I’ve ever raced”—but we’d be able to watch Kitchens tackle the course as if we were watching a game screen thanks to five Ego cameras from Liquid Image mounted on the M3.

Kitchens and IDB Racing trailered the purpose-built M3 1,000 miles from Texas to Colorado to conquer the Time Attack 1 class in the 92nd running of “The Race to the Clouds,” and everything went well at first.

“We started the week off great, and after the first day of practice our times put us sixth place in class, with plenty of room to improve,” Kitchens said. “We came back the next day for qualifying ready to drop our times but hit a damp spot in the pavement in the early morning hours and put the car off the track.”

The aero parts were damaged beyond repair, and though the team was able to get back on track the M3 had lost a crucial element of its performance.

“The vehicle handled substantially poorer sans the aerodynamics,” Kitchens said, “and it put us at a major disadvantage.”

Even a minor crash on Pikes Peak can be deadly; fortunately, Kitchens himself wasn’t injured. “All of my safety equipment worked perfectly, and I walked away from my crash in qualifying with nothing damaged but my pride,” he says.

Unfortunately, however, the engine cooling ductwork had been damaged along with the aero.

“Wil got off to a great start on the lower section, but before he reached the Glen Cove checkpoint the car was beginning to overheat badly,” said crew chief Ryan Warren. “Two-thirds of the way up the course, we recorded coolant temperatures as high as 137° Celsius (278°F), and the car barely made enough power to make it all the way up the mountain. We finished the race, though, and we weren’t last!”

Far from being disappointed in the effort, Warren was optimistic. “Despite finishing much further back in the field than we intended to, we were able to acquire a great deal of information that will help us come back next year in much better form!”

Even if they don’t come back with a big turbo and 800 horsepower, we’ll be watching.

*Note on altitude: Some sources say the race finishes at 14,110 feet, not 14,115 feet as the sanctioning body states. According to Megan Leatham of PPIHC, “We are not 100% certain what the altitude is at the finish. We officially state the altitude is 14,115 at the summit because the City of Colorado Springs and Forest Service has determined that is the altitude at the summit.” 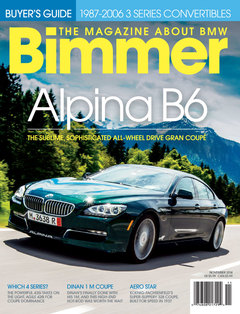