It may look roughly aged, but Julian Bednorz’ 2002 wears a patina of paint, primer and wood stain, deliberately applied to interesting effect. 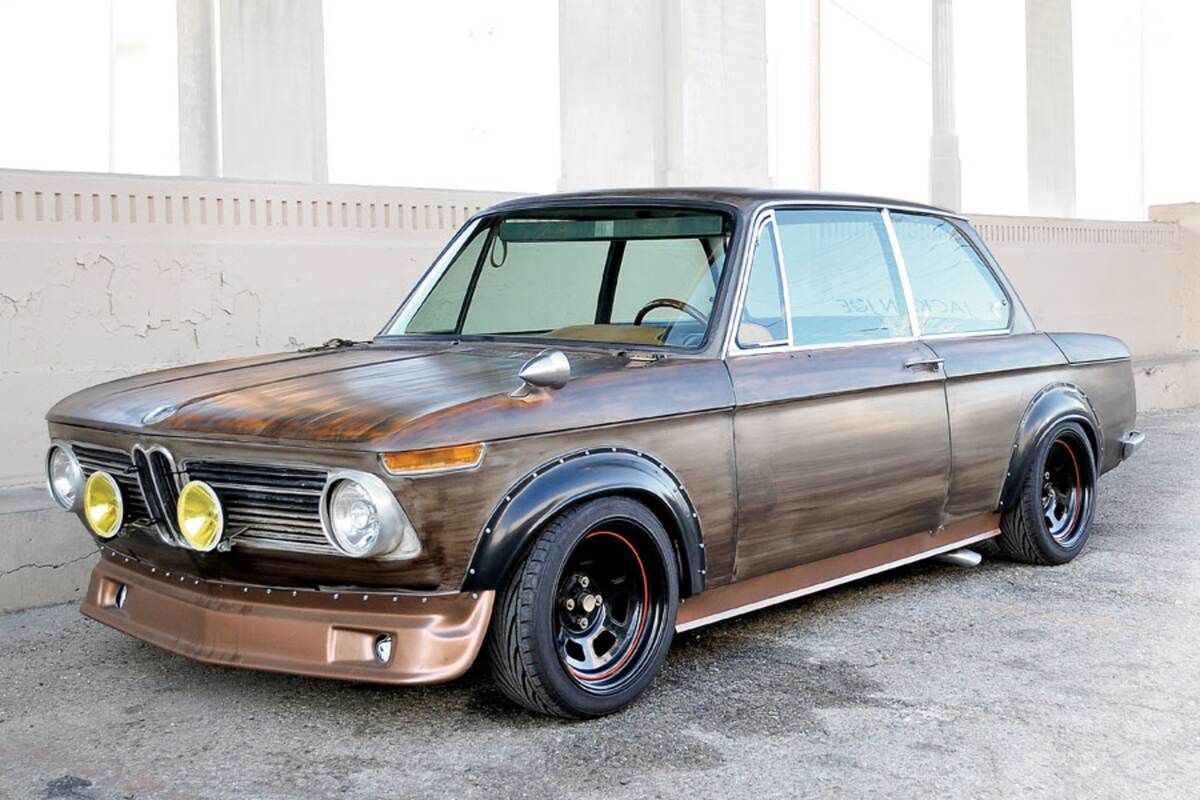 When Julian Bednorz brought home his 1971 2002 in October 2013, he didn’t have a vision for its transformation, but he knew he wanted to lower it. “I just thought if I could get it to sit right, I’d be happy.”

He also knew he didn’t want to take the usual route with restoration, which his sister had just done with her 1972 2002. As beautiful as that car was, Bednorz wanted to do something different to his 2002, which had already had its original Colorado orange body sanded and primed for painting.

“I was tired of looking at dull gray and heavily under the influence of Stanceworks [the website featuring cars slammed low and sitting on fat, cambered wheels and tires],” Bednorz recalls. “Instead of ‘just painting it,’ I wanted to use an organic approach that could sort of transform over time, much like Mr. Slammington [an E28 customized by Stanceworks’ Mike Burroughs, whose Ford-BMW truck was featured in Bimmer #117], a kind of character development, rather than typical car restoration, using the surface to tell a story, where it’s been and what direction it will go.” 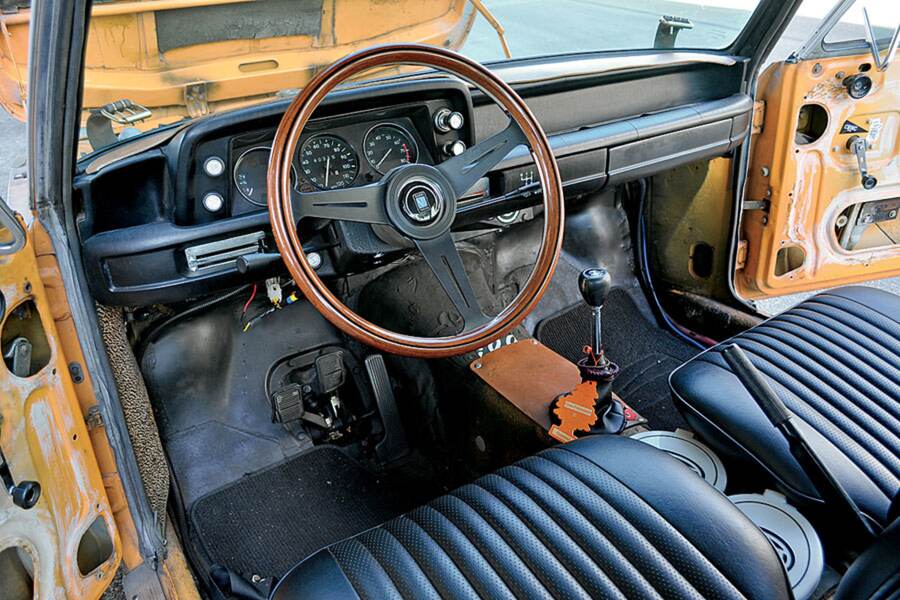 For an artist like Bednorz, who started drawing and painting at an early age, dabbled in furniture design and ceramics and then studied architecture at USC, the 2002’s 42-year-old body would serve as the ideal blank canvas. He wasn’t sure how he’d go about getting the look he wanted, and he wouldn’t know the look was right until he hit upon it.

He started by sanding off the primer to get to the old Colorado orange as well as the Fjord blue beneath the primer on the trunk, which had been sourced from another ‘02. From there, it was an adventure into the unknown. Burroughs’ Mr. Slammington had been stripped and treated with diesel oil, a method Bednorz tried himself along with a few other methods. 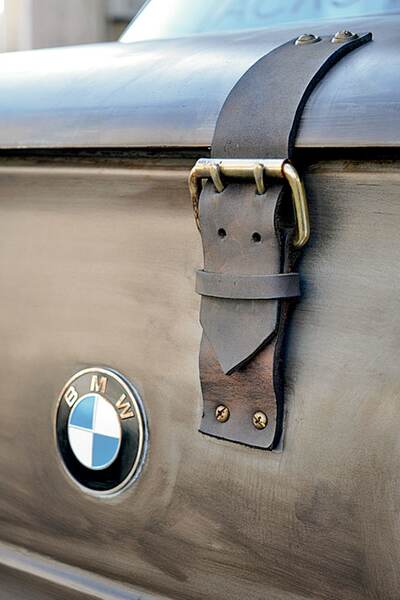 “I didn’t want to do the same thing. As an artist/designer, you always want your narrative to be original, but at the same time still be able to connect with people on a personal level,” he says. “I tried used oil, though, coffee grounds, dyes and all kinds of other weird sh*!, supplies mostly found in the hardware store paint section.”

The process was trial and error.

“I just kept going till I got the results I wanted,” he recalls. “Sanding, staining, sanding, staining…I just kept telling myself that if I messed it up really bad, I could always take it, tail between my legs, to my girlfriend’s dad’s body shop.” 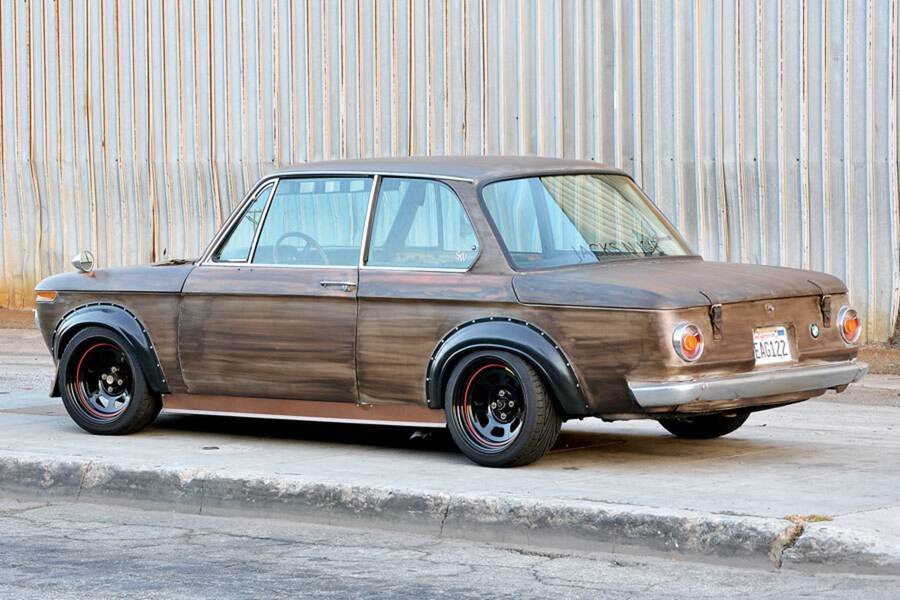 Look closely under the layer of brown wood stain and you’ll see layers and alternating colors of primer gray, orange, blue and the bare metal underneath, especially on the top half of the body. At first glance, it seems like sloppy and careless applications of stain. But let it breathe a little, then go in for a closer look and you can see how Bednorz used deliberate strokes to achieve an effect that draws you in and holds your attention.

“The textures and surfaces are there to help materialize an emotion; they give us a sense of place and give a jumping off point for our minds to wander,” he explains. “I don’t want people to just look at it, I want them to feel something, whether they like what I’ve done or not. You can read through the layers of the stain and peruse the finishes like pages in a book. That development is what keeps it interesting. It’s not just a finished product. Without attention to the layers and details, the stain could quickly become a one-liner.”

I asked Bednorz if he was familiar with BMW’s Art Cars. 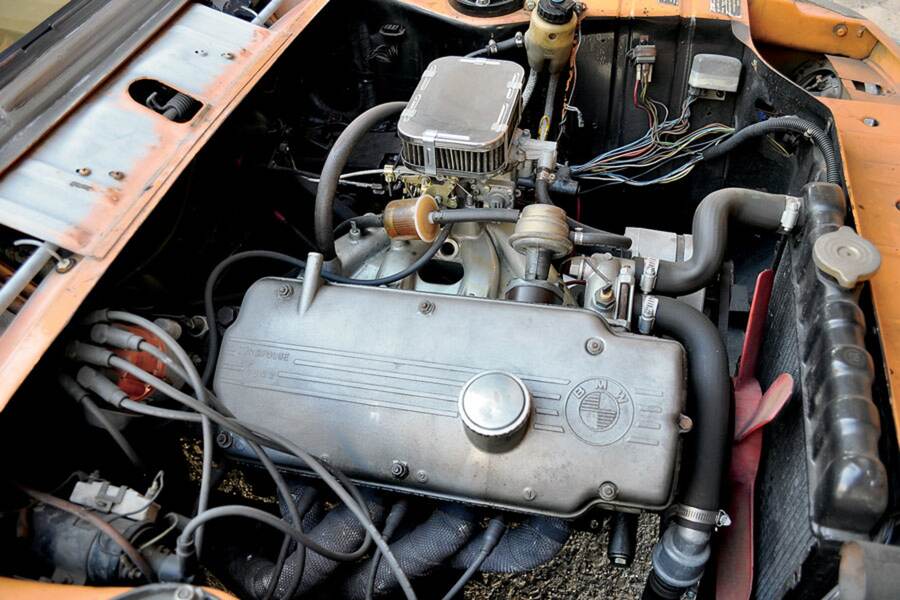 “First time I saw (Sandro) Chia’s E36 my mind was blown,” he says. “(Alexander) Calder and (Frank) Stella’s schemes are on point, and I’d probably choose either for a race car. But props to Warhol ’cause he painted directly on the car—no plans or scale model first. That’s pretty raw.”

And did the Art Cars inspire him?

“Honestly,” he said, “I think looking at those cars is inspiring but more intimidating to me. Maybe it’s just my personality. I look at that E36 (by Chia) and I’m like, ‘WTF? I could never do something like that,’ and get bummed out.” 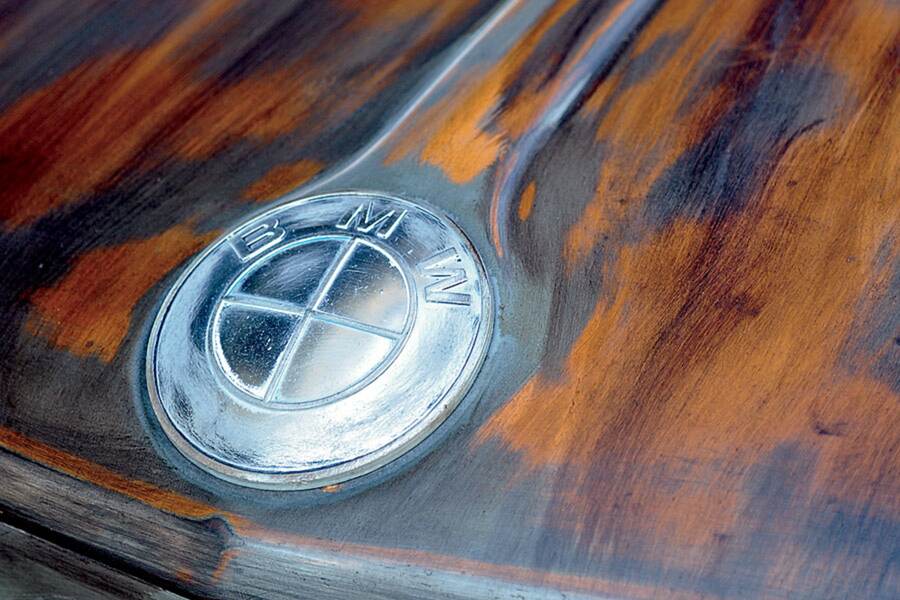 Fortunately, Bednorz wasn’t deterred. In addition to the paint and color treatment, he continued to add unique touches to several areas. He chose fender flares and a front spoiler from Ireland Engineering, so the road racer connection is obvious. He also added Ireland Engineering’s springs and Bilstein shocks—not to turn his ‘02 into a track car, but to get it “to sit right.” As far as Bednorz was concerned, the car didn’t sit low enough when he first put on the springs, so he cut them…twice.

And before he could cram the fenders with a set of NASCAR-style Bassett wheels, he spent two weeks trying to convince his father, who used to drive Julian around in his own 2002, to help him cut them open. Aside from getting his father’s help with the fenders, Bednorz did most of the work himself in the parking lot in front of his loft.

He had always admired the leather hood straps on Porsche 356s, but instead of buying them online Bednorz made his own and installed them himself. Then he cut the remaining pieces of leather to cover the dashboard and transmission tunnel. 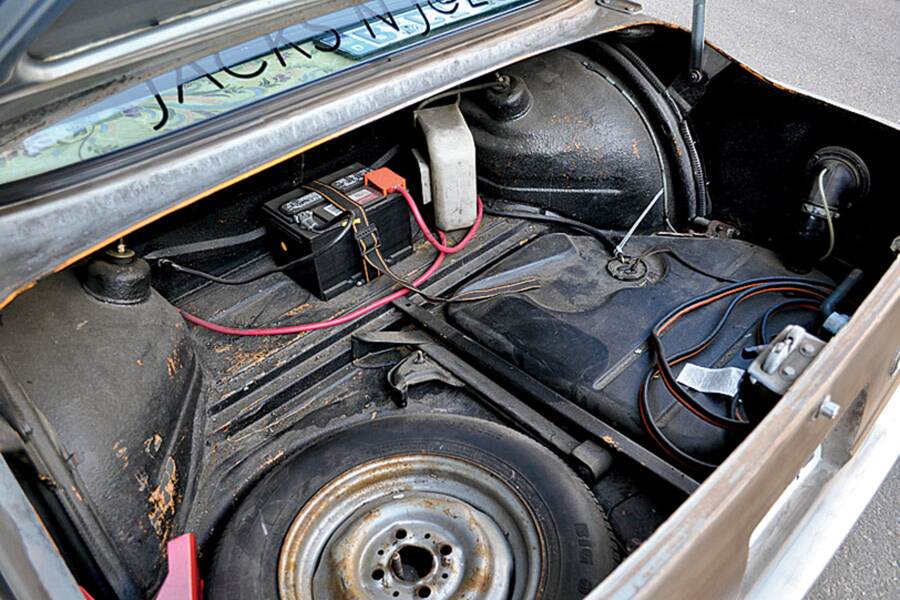 As for the side skirts, Bednorz joked that they were NOS (new old stock) barn finds. He wouldn’t say exactly where they came from, but you can probably find them at your nearest home improvement store. Along with the front spoiler, the side skirts were painted a custom color he called “Old Dirty Bastard.” Using everyday, non-automotive parts speaks to his DIY ethos and is a tip of the hat to Marcel Duchamp’s “readymades” and the more recent “found art” movement.

The stylistic sub-genre that’s most apparent in his Deuce is the rat rod. Bednorz admires one-off hand-shaped hot rods wearing rusty patinas, cars like the Ford-BMW built by Mike Burroughs.

“I like seeing rat rods because they’re always really personal. They have those details that probably only the owner knows/cares about,” he says. “I love cars that have a raw feeling to them, a man-and-machine type vibe.” 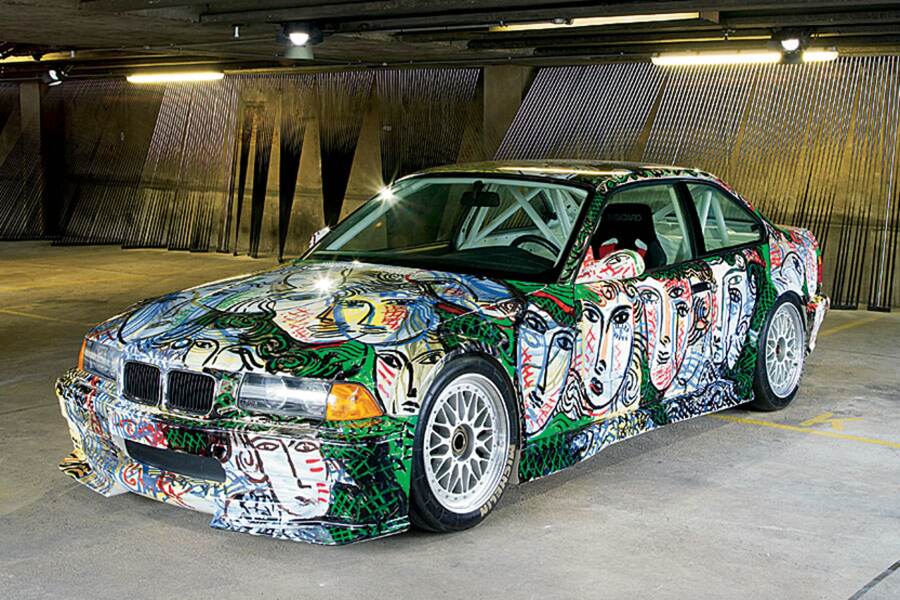 When I ask to experience the man-machine vibe in Bednorz’ car, he chuckles. “Uh, sure.”

Still a work in progress, the doors have been stripped of their interior panels, the Colorado orange exposed and faded, the unfinished metal sharp to the touch as I grab a hole and pull the door shut. Bednorz has to show me how to attach the old school seatbelt that, even when clipped in, makes me wonder about its effectiveness. A nearly new, wooden Nardi steering wheel looks a bit out of place in this cockpit, but it feels great in my hands.

The previous owner had given the car some choice modifications such as a Weber 32/36 carb, Ireland Engineering stepped headers onto the completely rebuilt 2.0-liter M05 engine (later designated M10) and a limited-slip differential in back. The underbody had been sprayed with rustproofing and all bushings were replaced. And instead of the stock four-speed transmission, he’d bolted in a five-speed from an E21 320i. To make it fit, he had to widen the transmission tunnel, unfortunately with what looks to have been a ball-peen hammer.

That widened tunnel nearly touches the gas pedal, and the side of my shoe rubs up against it when I try to feed in some revs, eliciting another laugh from Bednorz. The throws on the five-speed are long, the brakes require a stiff leg to get them to bite and the Bilsteins and cut springs feel surprisingly compliant. When we hit an open straight, I step into the pedal to exercise the Weber and the engine responds with a healthy surge of grunt just after 3,000 rpm, showing an eagerness to rev. Underneath the visual statement, Bednorz has a solid chassis with a lot left to give.

He’s considered putting in an S14 four from the E30 M3 or at least getting more out of the stock engine, but he’s in no hurry.

“I don’t really know. I was planning on going to a dual carb setup along with other upgrades, but I’m not sure yet,” he admits. “Honestly, I’ve just been loving the car as it is, breathing in the faint smell of gasoline and listening to the many rattles that come with its age. There is something calming about being inside—maybe it’s the carbon monoxide from the side pipe!”

You’d think the fumes really had gone to his head if you were to see Bednorz walk past his E36 M3 and hop into his ‘02, which has earned its way to daily driver status. The smells that haven’t faded after 40 years and the rattles that take on a musical quality, that elusive “character” that seems to have been engineered out of newer cars, those idiosyncrasies that only an owner would put up with, all of them add to instead of subtracting from the driving experience.

While his car won’t be mentioned along with those created by Warhol, Calder, Hockney, Stella, Koons and others for BMW’s Art Car series, Bednorz’ work could sit comfortably in an edgy downtown gallery as a mobile installation piece. As a mashup of different influences, it defies categorization—and like all good art, it’s hard to take your eyes off it. 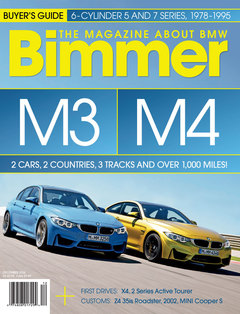