Are manual transmissions on the outs?

Yes and no. If you’re committed to shifting the old-fashioned way, here’s how to opt in. 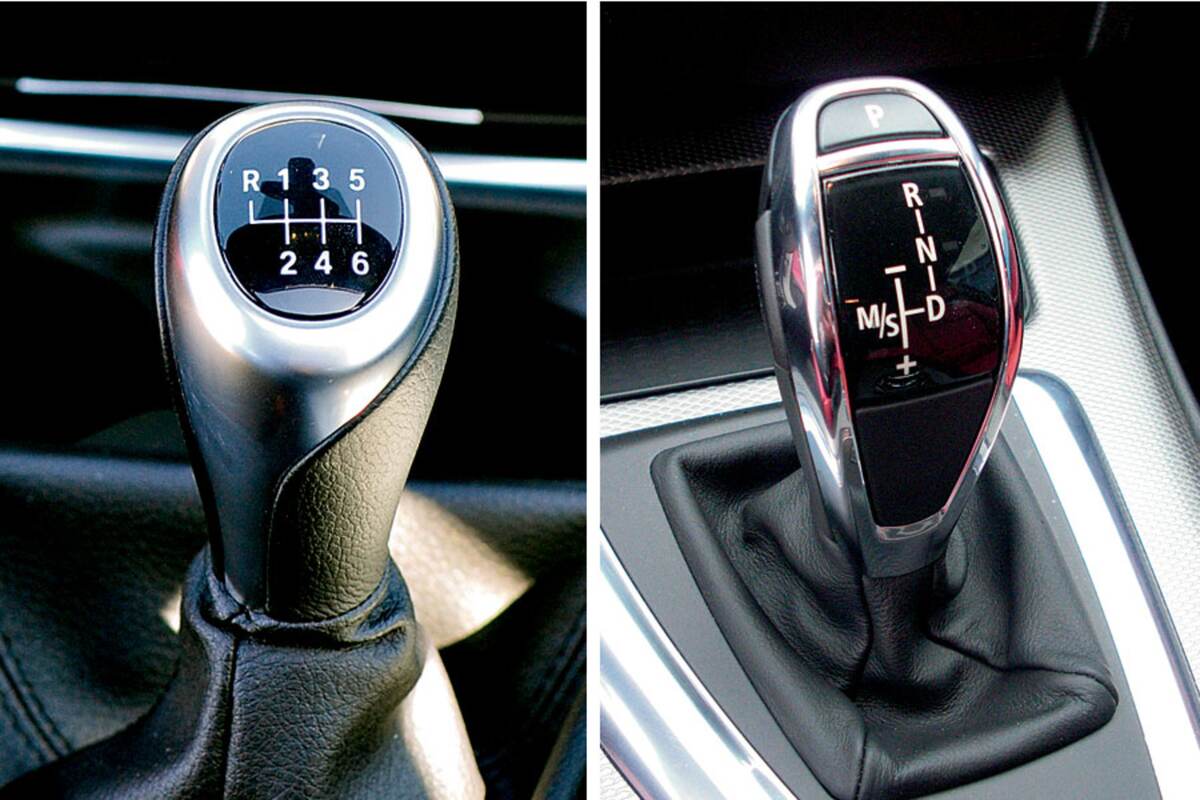 What happened? Blame the “take rate,” which became too low to justify the manual transmission’s continued availability on the 5s and 6s. The “take rate” refers to the number of customers who choose a particular option; if it’s insufficient, manufacturers are forced to discontinue that option—especially if it’s a transmission or engine variant that requires separate (and costly) DoT certification before it can be sold in the U.S.

It depends, as not all dealerships order manuals for stock. The dealership nearest Bimmer HQ, Sonnen BMW in San Rafael, California, had 200 new BMWs in stock at this writing, 13 with a manual transmission. Ten of those were 2014 535i models, which suggests that Sonnen had grabbed the last of the manual 5s for its enthusiast customers. The other three? A 228i, M3 and M4, sound choices that will be quick to leave the lot.

The dealership local to Tech Q&A, Tom Hesser BMW in Scranton, Pennsylvania, had 41 cars on the lot, none of which were manuals. Moving a bit further afield to Paul Miller BMW in Wayne, New Jersey, we found 13 manuals among 214 cars on hand: five M6s, seven 335i xDrive sedans and one Z4 28i.

To find out what drives those stocking decisions, we spoke with Jon Shafer, internet sales manager at BMW Santa Barbara in California (and one of the founders of Bimmerfest). According to Shafer, a manual is unlikely to end up in a dealer’s physical inventory by design. More likely than not, it was the result of a customer special order deal gone awry.

“Manuals constitute probably less than 3% of U.S. BMW sales today,” Shafer said. “Not surprisingly, almost every manual BMW is a customer special order as a result. It’s probably close to 100% customer special order, but some customers special order and then decide they don’t want the car for any of a variety of reasons. This happens with automatics, too, but more often with manuals. Someone in the household might object to the manual, or the harsh realities of modern metropolitan traffic might prevail over the fun-to-drive factor of the manual.”

Under California law, ordering a car and putting down a deposit places the customer at no obligation to buy the car. Shafer says canceling a manual transmission special order sale puts the dealer in a tough position, as any special order car is likely to sit on the lot longer than one ordered more generically, and because few dealers will trade with one another for cars with manuals.

Despite the risks, Shafer himself is a big fan of the custom-order process, and he encourages buyers to use it: “The special order allows the buyer to get everything they want, down to the most minute detail, and not have to pay for equipment or options they don’t want.”

We think ordering your car makes perfect sense, and the online configurator at BMWUSA.com seems to encourage special orders, as well. It lets customers build the car they want online, then send the configuration to their local dealer to initiate the ordering process.

The configurator does, however, default to the automatic. Clicking the no-cost manual option causes a “Do you really want to do this?” window to pop up, and it may invalidate other build configuration choices.

“Our driving assistance technologies such as Driver Assistance, Driver Assistance Plus and even the Parking Assistant options can be combined with the manual transmission,” said Julian Arguelles, BMW NA product and technology spokesperson. “A few functions such as the proactive driving assistance function, which uses navigation information to proactively shift and take advantage of coasting opportunities, are only available with the eight-speed [automatic].”

Worse, I’ve heard from many readers who say they’ve had problems ordering a new BMW with a manual transmission. To take just one example, I spoke with a couple right before press time who’d fallen in love with a 428i Coupe in their local dealer’s showroom. It had an automatic, however, and the wife insisted upon a manual. They wanted to order one so equipped, but the dealer’s salesman told them it wasn’t available, which is simply untrue. They ended up keeping their E46.

I had the same difficulty myself when I tried to order an E46 325Ci with a manual transmission way back in February 2005. After configuring my car online, I sent the details to my BMW salesperson, who called me almost immediately. The car was nowhere to be found already built, he said, and the dealership had already used up its “build allocations” for the 2005 model year. In the end, I got my car only after an executive at BMW NA secured one of those elusive build allocations on my behalf.

BMW NA: On our side

Customers who have difficulty in special-ordering a car or who meet with resistance at the dealer, Arguelles said, should contact BMW Customer Relations via e-mail at customerrelations@bmwusa.com, or by telephone at 1-800-831-1117.

Note that BMW NA is on our side with this whole manual thing. They’re enthusiasts themselves, and they really go to bat for U.S. customers at the big table in Munich. They’re also trying to come up with strategies that will ensure manuals remain available, and that customers who want them can get them.

“We will pursue the discussion internally about the potential to identify an ‘ordering expert’ who can coach customers through the process of locating or building ‘their’ BMW through our dealer network,” said Matt Russell, product communications manager. “This may fall in line with the new BMW Genius initiative.”

According to BMWUSA.com, the BMW Genius initiative works like the Apple Genius program: “At many BMW centers, you’ll now find a product expert who will assist you in finding the perfect vehicle to suit your lifestyle and needs. The BMW Genius is specially trained to demonstrate and help you get familiar with all aspects of your BMW—before, during, and after your purchase.”

Shafer said BMW Geniuses are there only to be geniuses; they are not salespeople. It’s worth noting that BMW Santa Barbara, a large dealership smack dab in the middle of BMW Land, had no geniuses on staff at press time. Russell said a BMW Genius app is available for smartphones and tablets, but the App Store continues to draw a blank when searched. (As it turns out, you need to download this directly from BMW at http://www.bmwgeniusapp.com)

BMW of North America may want you to have your choice of transmission, but the car configurator, the ordering system and some dealers would seem to dissuade you from getting a manual. Is it worth the effort nonetheless? If a manual is your preference, we’d argue that it is. And if you’re on the fence, there are some practical reasons to choose a manual over an automatic.

First, manuals cost less to own. According to edmunds.com True Cost to Own, manual transmission cars often cost less to insure, and their maintenance costs are lower because they require simpler and less-expensive fluid and filter changes than complex automatics, the latter requiring a filter or complete pan/filter assembly, as well as expensive special fluid in many late-model Bimmers. Manuals have fewer potential problems, as well, thanks to their simpler innards and lack of electronic controls.

Manuals can also be effective anti-theft devices. As a 2013 Carinsurance.com article advised, “Neither insurance companies nor the government break out theft data by transmission type, but police say that only a tiny percentage of stolen cars have manual transmissions. And there are always the headlines, like this one out of Orlando: ‘Would-be car thieves gave up because they couldn’t drive a stick shift.’ Or this one out of Tennessee: ‘Deputies: Carjacking failed; car was stick shift.’”

Because driving a manual takes two hands, manuals are safer: Just try to drive a manual in a metropolitan area while texting, fiddling with the audio system, eating or drinking. Under any condition other than highway cruising, distracted driving isn’t really possible with a manual—a great argument for putting teenagers behind the wheel of a manual instead of an automatic. You’ll never have to worry about unintended acceleration, either: If something goes wrong with the electronic throttle, just depress the clutch pedal and let the engine rev away (if it won’t obey your command to shut down) while you coast to the side of the road.

Good arguments all, but some drivers prefer—or require—automatics. According to federal government figures, only 5.1% of all cars and light trucks sold in the U.S. in 2011 had manual transmissions. BMW doesn’t divulge its own take rate on manuals, and Shafer’s estimate of 3% couldn’t be confirmed. Nonetheless, drivers of manual transmission cars are in an exclusive club, one whose members are arguably experiencing the true essence of the Ultimate Driving Machine thanks to the additional driver engagement of the three-pedal car.

As Pete von Behrens wrote in Porsche Panorama’s February issue, “Five inputs [are] required to control [manual transmission] cars: steering wheel, shift lever, clutch, brake, and throttle.” But with a two-pedaler, “Two of those inputs are no longer required. The shifter has been replaced by binary switches, and the clutch pedal is simply gone.”

Losing 40 percent of the vehicle-driver interface in the Ultimate Driving Machine would certainly have some effect upon the driver’s enjoyment of the vehicle…and on the public perception of the BMW brand. Enthusiasts are the ambassadors of the brand; who among us is not approached regularly by “civilians” asking for advice on cars, including which BMW to choose and how to configure it?

Although we’re a pain in the rear to BMW NA, we’re also an important part of their customer base, as Ferraiolo acknowledges. “We continue to consider the needs and preferences of enthusiast customers across our product spectrum under the BMW brand,” he said. 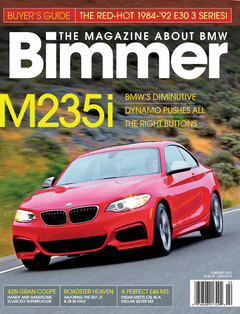