The first thing you notice about Barry and Lynn Friesen’s 2002 tii is its gorgeous Turquoise Blue metallic paint. Look more closely and you’ll see a startlingly mint BMW, a car the original-owner Friesens have kept that way since 1973. 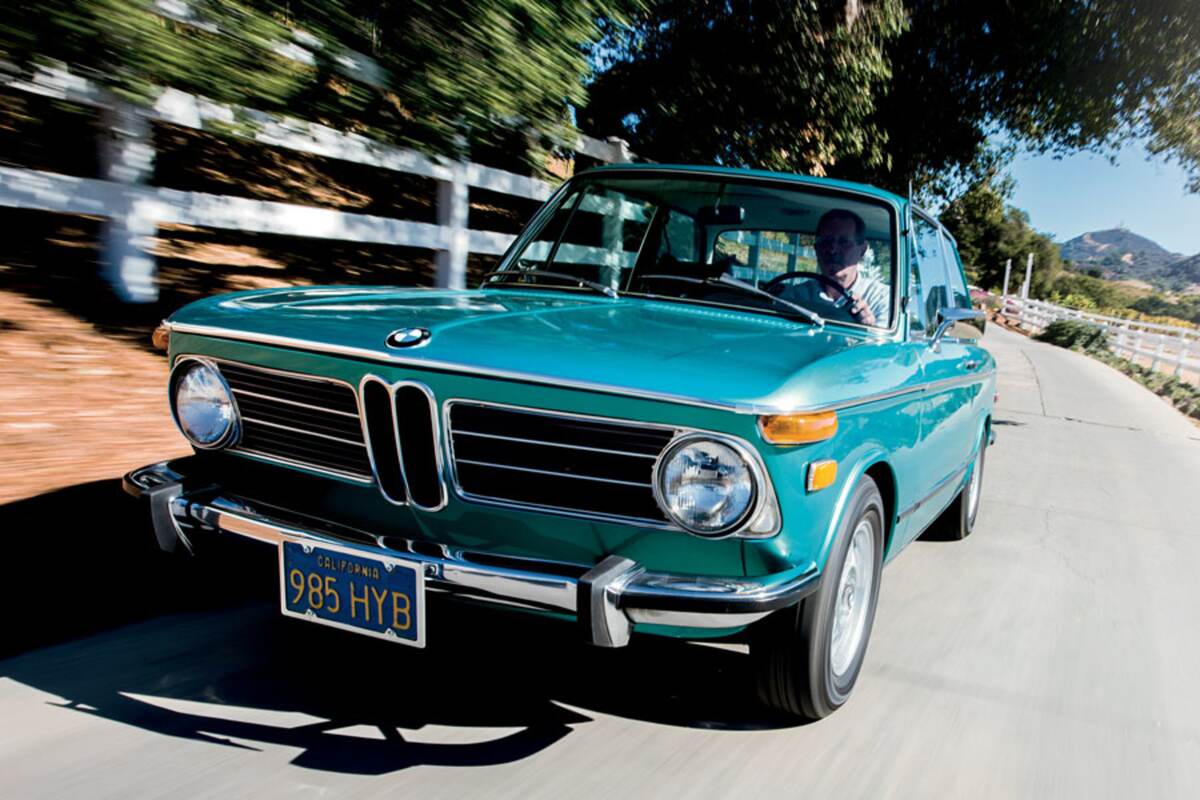 In 1973, the average house sold for around $32,000, a gallon of gas for 40 cents. Billy Jean King defeated Bobby Riggs in the “Battle of the Sexes” tennis match, and Muhammad Ali lost his heavyweight world championship to Ken Norton, only to win it back six months later. The OPEC oil embargo kicked off a worldwide recession, and President Nixon addressed the Watergate break-in on national TV, declaring, “I am not a crook.”

Also in 1973, a young couple from Southern California, Barry and Lynn Friesen, bought a brand-new 2002 tii from Long Beach BMW. They’d just sold their 1963 split-window Corvette Stingray, and Lynn needed a new daily driver. After the Corvette, Lynn found the standard 2002 a bit lacking, shall we say, and she decided the sportier 2002 tii would be more fun.

The making of a Bavarian hot rod

As it turns out, that dynamic informed the car’s creation. Max Hoffman, BMW’s U.S. importer at the time, was well aware that the standard 2002 didn’t have enough power to satisfy American drivers. Its 90-hp (SAE) four-cylinder engine was downright anemic compared to the engines in most American cars of the era, and it paled next to the 250-hp 327 that constituted the base engine in the Friesens’ 1963 Corvette. The 2002 may have been more agile in the corners, but it was severely underpowered by comparison.

BMW offered the more powerful 120-hp 2002 ti in Europe, but the twin-carb 2002 wouldn’t meet U.S. emissions requirements. Hoffman knew that BMW had been experimenting with fuel injection on the M10 four-cylinder engine, however, and he demanded that BMW install it in the 2002.

Despite initial resistance within BMW, the 2002 tii was introduced in April 1971. With Kugelfischer PL 04 fuel injection instead of a single Solex 40 PDSI carburetor, the 1,990cc four made 125 hp in U.S. spec instead of just 90, and a Bavarian hot rod was born.

It was still underpowered compared to an American muscle car, of course, or even the 180-hp E9 3.0 CS coupe that BMW also offered customers. Nonetheless, the tii’s smaller, lighter and more agile packaging made it the car of choice for driving enthusiasts who valued fun in the corners over higher outright speeds—which became irrelevant anyway when the U.S. government imposed a 55-mph national speed limit from 1974 to 1987, ostensibly to save gas during the aforementioned OPEC oil crisis. 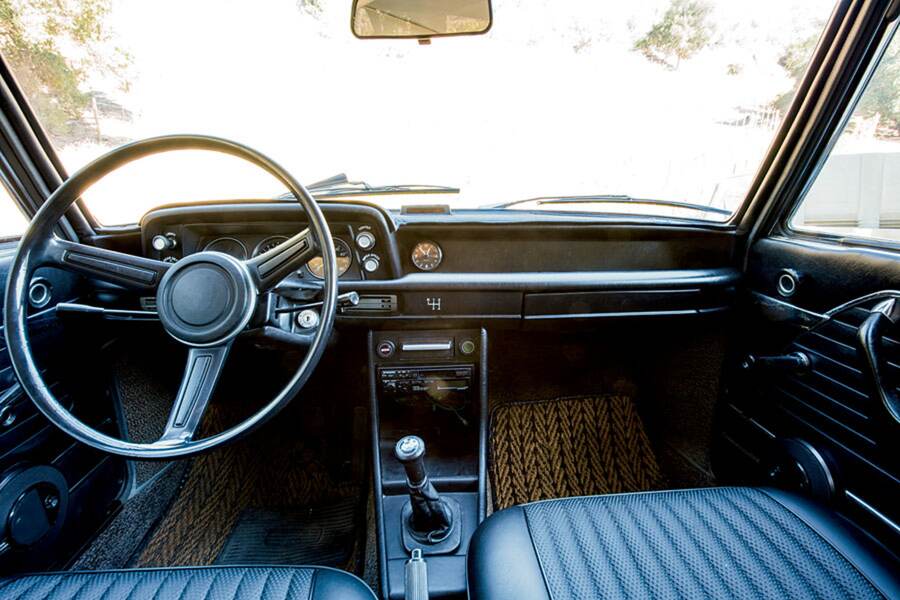 Even with just 125 hp, the 2,222-lb. 2002 tii could hit a robust 117 mph, and its 127 lb-ft of torque could propel it from zero to 62 mph in 9.4 seconds, considered neck-breaking at the time. Over-the-top 2002 Turbo aside, the tii was the crowning achievement of BMW’s Neue Klasse sedans of the 1960s, and it defined the spirit of the company for decades, especially in the U.S. As an affordable alternative for those who didn’t want a two-seat sports car but wanted more than mere transportation, the tii became a rollicking success. According to official company records, BMW produced 38,703 examples of the 2002 tii from 1971 through 1975, a huge number back then. Of those, U.S. buyers purchased 7,449 examples, about a fifth of which are estimated to be on the road today, 40 years later.

With that kind of attrition rate, a genuine 2002 tii is an uncommon sight these days. Rarer still are almost completely stock examples in mint, unadulterated condition still owned and driven regularly by original owners like Barry and Lynn Friesen. Most of us are too fickle to hang onto a car for one decade, let alone four, but the Friesens have remained faithful to their tii for the duration.

“She enjoyed it for 23 years,” her husband adds, “before we retired it as a daily driver.”

That was in 1996, when the tii was replaced by a Z3 roadster for Lynn’s everyday use, becoming the Friesens’ “fun car” for weekends and trips.

“Other than that, we drive it only occasionally now,” says Barry. 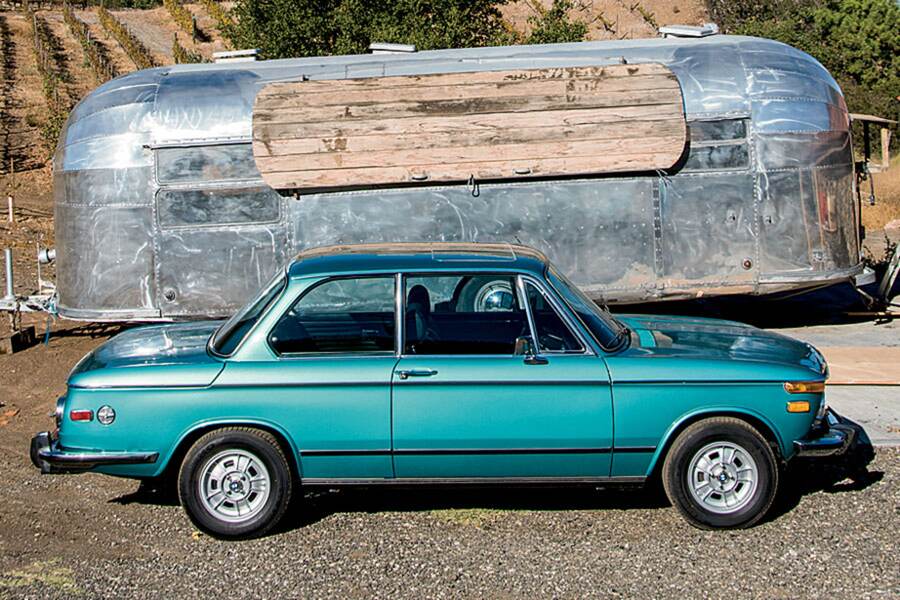 One of those occasions was a trip to Van Nuys in October for SoCal Vintage, where the tii won the Bimmer’s Choice award for the BMW we’d most like to drive home that day. Its Türkisblau (Turquoise Blue) metallic paint caught Editor Jouret’s eye just as it caught Lynn Friesen’s when she saw it on the lot in Long Beach in 1973.

They’d ordered a car in silvery Polaris blue sans sunroof, but special-ordering a BMW wasn’t quite the straightforward process back then that it is today. In the 2002 era, you took what the dealer had received from BMW when your turn came up, and it wasn’t always the car you had in mind.

As it turned out, the system worked in the Friesens’ favor. When they saw the Türkis tii bearing serial number 2763685, Lynn found that she preferred it to her original choice of Polaris as well as the Inka orange coveted by so many tii buyers then and now. A bright but still tasteful shade of greenish blue, the Türkis paint makes the Friesens’ car stand out as exceptionally handsome, not to mention unique. Not literally unique, of course: BMW sprayed more than one tii in this shade, but I’d never seen one until now. Where blues are concerned, Polaris and even Baikal seem far more common than Türkis.

The rarity of that Türkisblau shade encouraged the Friesens to keep the car in pristine condition for more than 40 years.

“It is an original car,” says Barry proudly. A principal inspector for the City of Los Angeles’ Department of Building and Safety, he’s taken care of all the tii’s maintenance himself: many an oil change, a radiator, a water pump, two or three thermostats (some things never change), a set of shocks and struts…the usual things that need replacement over the decades. 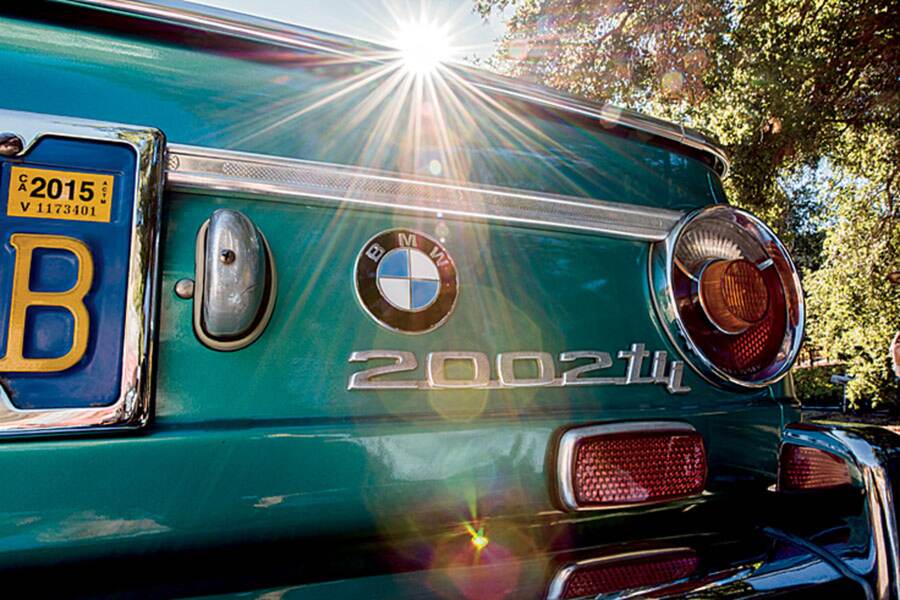 It hasn’t been restored, Barry says, but it has been repainted twice since leaving the factory in Munich, which isn’t surprising given its long-term exposure to the bright SoCal sun.

“The first was done in 1982 by Bon Voyage Body Shop in Santa Monica when we had all the trim, old finish and windows completely removed,” he says. “The second was done by Reegan Seagrave in 2007, also removing all trim, doors and windows, and repairing some minor rust in the rocker panels.”

Also in 2007, the front and rear seats were reupholstered in fresh black vinyl by Bill Dunn in Santa Monica, and Friesen replaced its mundane steel wheels with a set of stylish FPS alloys. These were a factory option when the car was new, and he might have gotten the last set, because these wheels are no longer available as new from BMW! Measuring 5.0 × 13 inches, they’re shod with modern Kumho rubber in 185/70-13 at all four corners.

In Europe, late-production 1975 tii’s could be had with a five-speed Getrag 235 sport transmission (now also NLA) in place of the four-speed Getrag 242, and the Friesens’ car got one of these along the line, too. The sunroof—which they hadn’t wanted but appeared on the car as delivered—needed to be rebuilt, and the car has been lowered a bit from its original ride height, again to factory standards.

“As I understand it,” Barry tells me as we drive through the winding roads of the Santa Monica Mountains, “in the 2002s that were shipped to the U.S., the front bumper was too low to meet the U.S. standards, and a spacer was installed by the factory between the front struts and the tower. We removed the spacer to lower the front and reinstalled it on the top of tower.”

The door panels, carpeting and headliner are due for replacement sometime in the future, and a bit of mechanical work might be in order.

“I might freshen up the engine next year,” Barry says. “It would be fun taking it up the coast.” 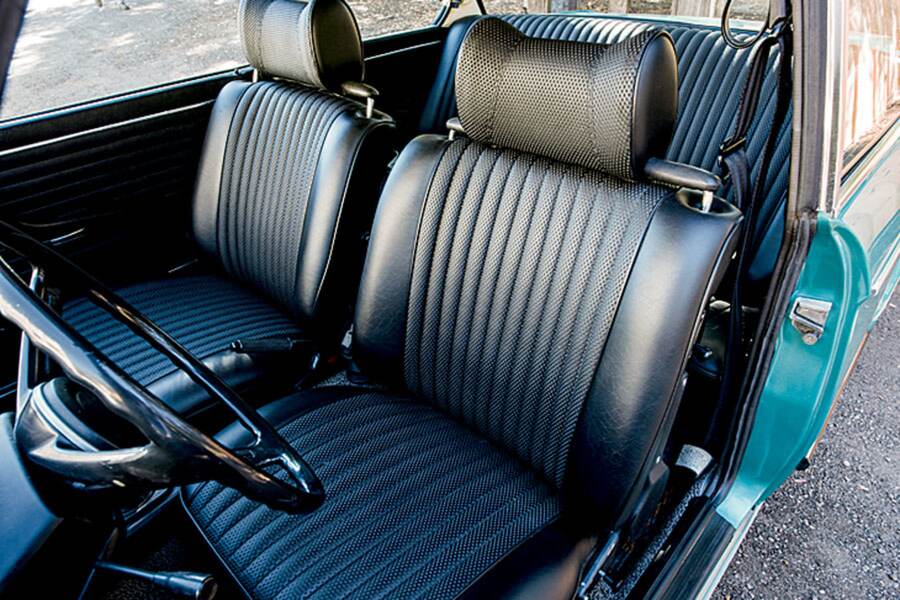 The first 2002 tii I drove was a new one that belonged to a friend in Germany. Soon after he got it, we drove the tii from Stuttgart to Berne in Switzerland to see Tina Turner in concert. I remember that I liked the trip way more than the show…and Tina was admittedly brilliant.

Forty years later, the Friesens’ BMW feels familiar but somehow more delicate than it did in 1973. These days, we’ve grown used to machines that weigh twice as much as this 2002, and which deliver four and five times the horsepower. Chip-controlled and fool-proofed, new BMWs feel glued to the asphalt, power-steered and with brakes that deliver astonishing forces within hundredths of a second.

This tii does not.

“This is not a modern car,” agrees Barry. “This is still a car you can drive, and you need to drive.” 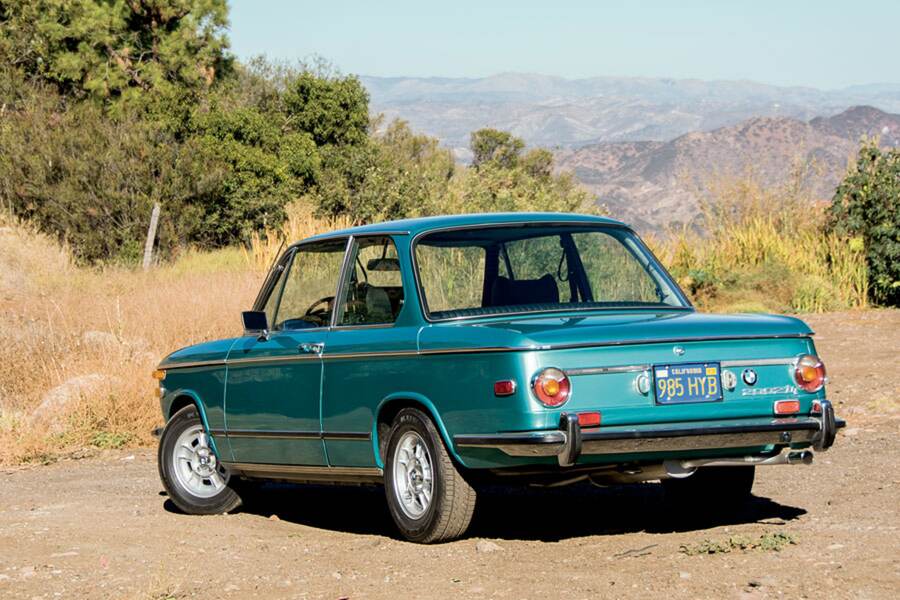 He’s right: You drive the car around those brilliant long sweepers along Mulholland Highway, not the other way around.

I hear a few minor creaks when I brake into a corner, and something rattles a tiny bit near the front axle. The steering is still wonderfully exact, however, and the ease with which the tii goes into corners feels almost dainty. But, boy, it holds the road, and it answers your commands with immediacy thanks to excellent engineering and a low curb weight.

You feel the road, you really do. You know what the car will do, and it will do it exactly the way you tell it to…even if what you ask might have unexpected consequences if it goes beyond certain physical limits. Whatever else it might be, it’s also driving in a superbly anachronistic way.

Even my seating position feels different: more alert, more ready. The steering wheel is this huge-diameter thing, and its rim is way thinner than those of today’s cars. The shift lever feels a bit looser than what we’re used to in cars forty years newer, but the shifts themselves are precise and smooth. The brakes won’t ram your head against the windshield, but they do have a direct response that communicates the car’s exact weight—just 2,222 lbs., remember—through your foot, down to the last ounce.

The power comes on with a more subtle push. The torque is a measly 127 lb-ft on paper, yet it goes right into your bones. And yes, the M10 four revs well past 5,000 rpm, and it keeps making power all the way to redline. (BMW quoted peak power at 5,800 rpm when the car was new.) Or so Barry says: In all honesty, I don’t dare rev it up to those limits. I don’t want to be the one behind the wheel when its middle-aged mechanicals decide it’s time for an early retirement!

Even without pushing it, the performance is still energizing, and it’s still capable of handling modern traffic. I understand why Lynn wanted something newer for the daily commute, but the tii’s old-fashioned character is liberating in a strange sort of way, as if it’s freeing us from the hurry-up-and-get-there-already of modern driving.

Me, I’d drive this thing from Stuttgart to Berne anytime. With delight. 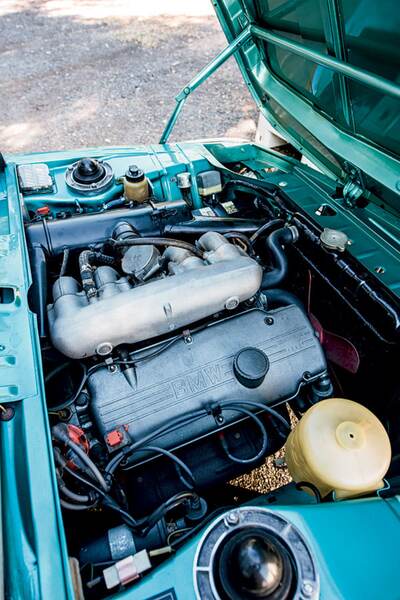 Unfortunately for me, Barry and Lynn aren’t selling.

“Oh, no!” Barry responds to my inquiry. “It’s not one I would sell, because we’re the original owners.”

And how could he?

The Frieses bought it two years after they got married.

And he still has the original bill of sale from Long Beach BMW. Six thousand one hundred dollars. Imagine that. 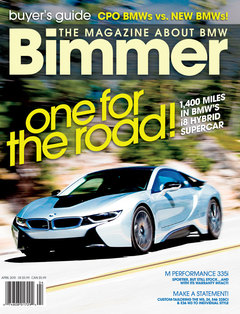