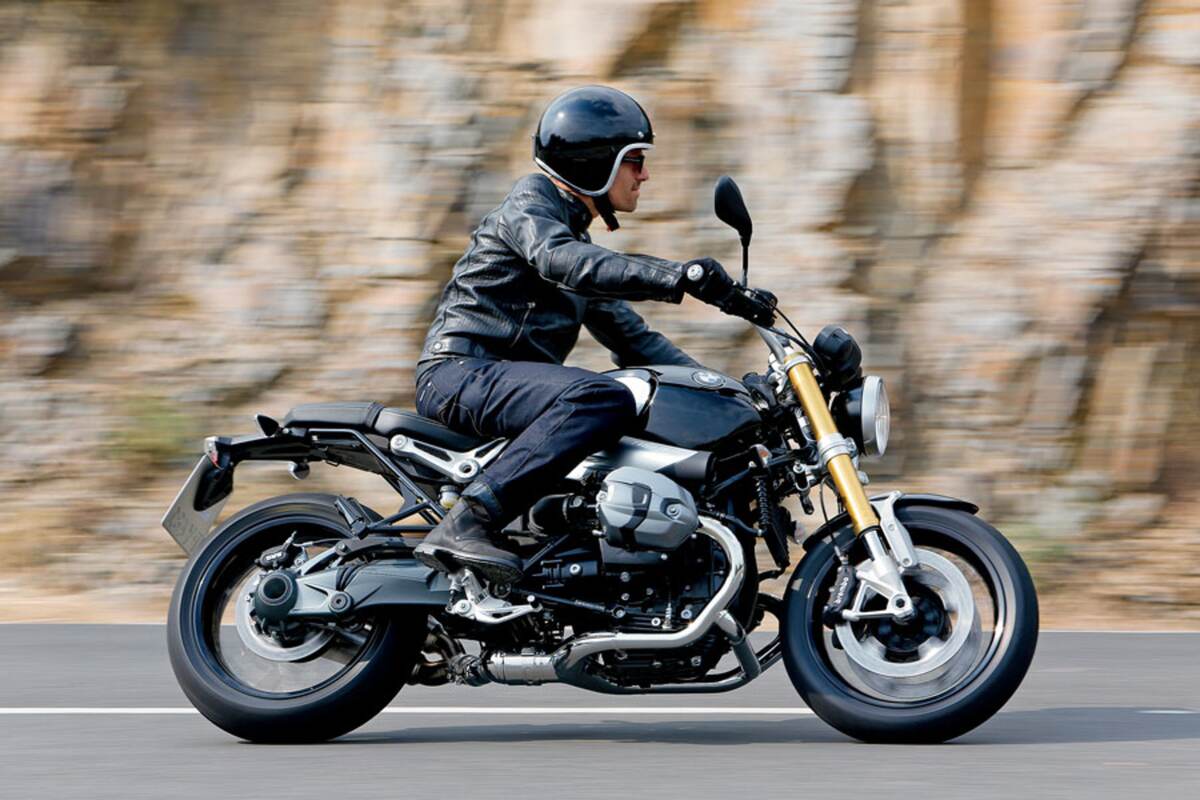 Built to commemorate 90 years of BMW motorcycle production, the 2015 R nineT (“90”) also celebrates the company’s tradition of building sport-touring machines for mature riders. As such, it exhibits the purity of design characteristic of BMW’s boxer-engined bikes, along with retro styling that invites personalization and customization.

The R nineT draws influence from the Concept 90, a partially-faired tribute to the R90S that won the first AMA Superbike Championship in 1976. Unveiled at the 2013 Concours d’Eleganza Villa d’Este in Italy, the Concept 90 show bike blended BMW’s expertise with that of noted SoCal designer Roland Sands. 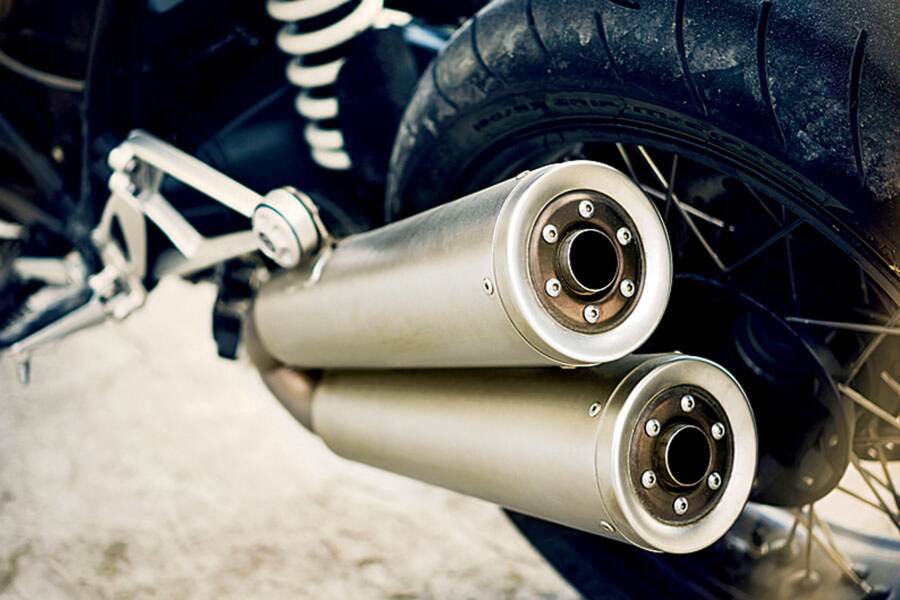 The R nineT’s customizability is largely due to its tubular steel spaceframe, which incorporates the boxer engine as a load-bearing element. The frame’s basic construction consists of a front section with an integral steering head and a rear section incorporating the swingarm mount. The pillion frame is removable by undoing the eight bolts that hold it in place, allowing the R nineT to project a stylish image whether ridden solo or two-up. As a solo bike, it can be fitted with an aluminum tail cover that gives it the look of the early café racers of the 1950s.

A circular headlamp with the BMW logo in the center of the lens pays tribute to tradition, as does the instrument cluster containing a pair of classic round gauges, speedo and tach, that integrate into the overall front-end design smoothly and harmoniously. The simple styling of the gauges reflects the R nineT’s inspiration while incorporating the convenience and amenities of modern technology, like an onboard computer that shows key information including time of day, engaged gear, remaining range, trip mileage, and servicing interval, plus average speed and fuel consumption in a large, clear segmented display. Elsewhere, the bike’s electrical system is configured for enhanced technical flexibility, allowing for the installation of alternative electrical components such as headlights or turn indicators.

The heart of any motorcycle is its engine, and the R nineT draws its motive force from an opposed-twin boxer engine, just like BMW’s first-ever motorcycle, 1923’s R32. In this case, it’s an 1,170cc oil/air-cooled boxer twin with double overhead cams and four valves per cylinder exhaling through a twin-pipe Akrapovic exhaust featuring an electric servomotor-operated acoustic valve. 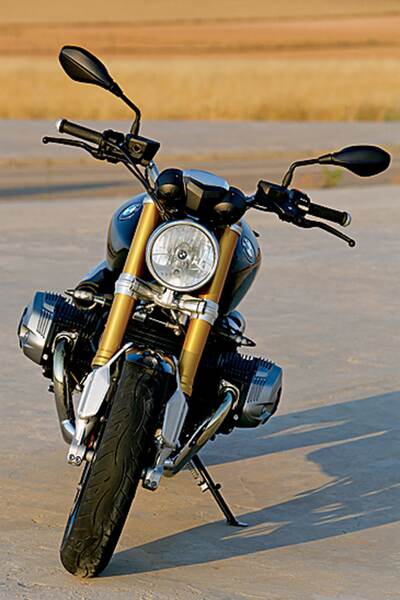 The engine produces 110 horsepower at 7,550 rpm along with 88 lb-ft of torque at 6,000 rpm for rapid acceleration off the line, sent through a six-speed sequential manual gearbox and a Cardan shaft to the rear wheel. Those 110 horses make their presence known even at a standstill, with a strong right-side thrust. Acceleration is smooth and steady over a broad range, however, and the final shaft drive is void of any jacking effect found in many other similar setups. The exhaust note is melodious and authoritative rather than raucous.

The riding position is ideal for a wide rang of rider physiques—the bars are well positioned, the seat well placed and the foot controls comfortably located. Despite the low 30.9 inch rider’s seat height and narrow straddle width, both rider and pillion passenger can enjoy comfortable seating. An optional “comfort” rear seat provides not only a larger seat area, but also extra cushioning for the passenger. The low seat height will lead some riders to compare the R nineT to a Ducati Monster, and that may not be a bad thing at all even though the 489-lb. BMW is about 90 lbs. heavier than the Italian company’s naked sportbikes.

The ride quality is both compliant and comfortable, and the bike is easily maneuverable and well-balanced. Suspension componentry consists of upside-down telescopic forks borrowed from the S 1000 RR superbike and a single-sided Paralever swingarm with a central spring strut. Wheel travel measures 4.7 inches at both ends. The wheels are traditional spoked rims in black anodized alloy, mounted with Continental RoadAttack 2C tube-type tires that measure 120/70 ZR-17 up front and 180/55ZR-17 aft. For those who want to fit a wider rear, the R nineT has enough room between the mufflers and swingarm that the standard 5.5 × 17-inch wheel may be replaced with a 6.0-inch-wide version. 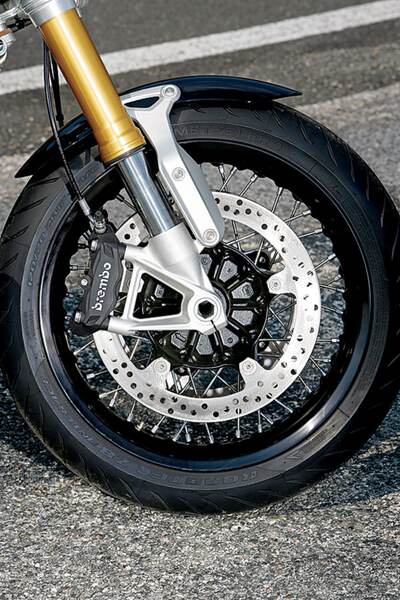 My test 2015 BMW R nineT came with a base price of $14,900 and an as-tested price of $15,250 with dealer prep and handling charges. That could go up considerably if a rider takes advantage of BMW’s extensive menu of customization options, with accessories tailored to the R nineT’s character. BMW offers everything from tank and rear bags to HP carbon fenders and a titanium Akrapovic exhaust, plus LED turn signals and BMW Navigation. The R nineT provides the perfect palette for personalization, and few will remain stock for long.

As a great-looking, fun-to-ride roadster with old-school flavor and up-to-date technology, the 2015 R nineT represents a breath of fresh air for BMW Motorrad. In fact, it may be one of the best bikes to come out of the Berlin operation in a long time, as well as one of the coolest. 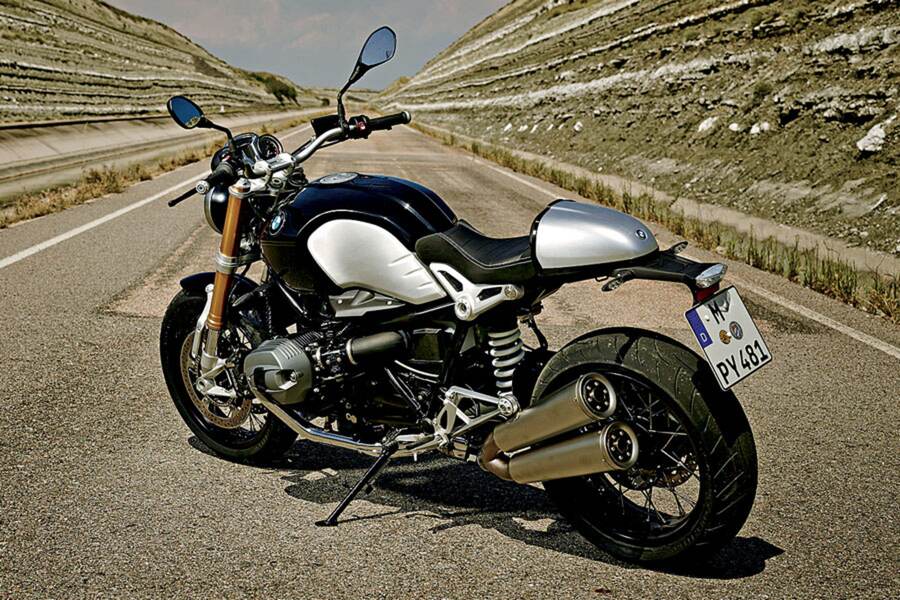 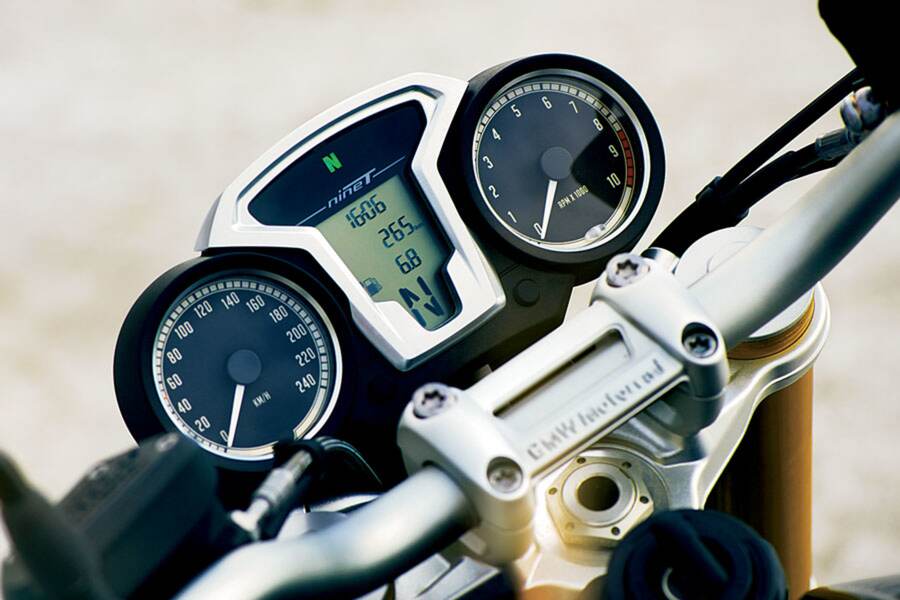 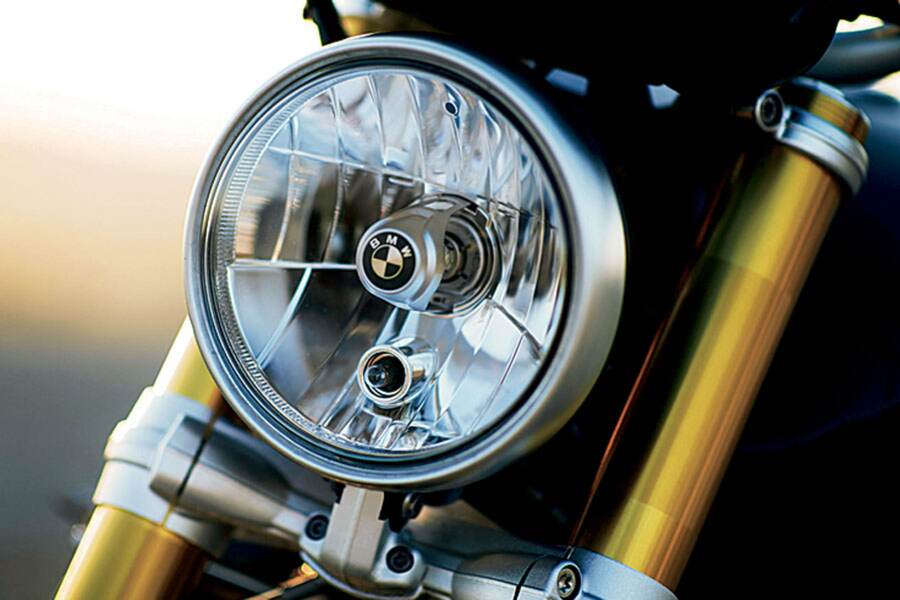 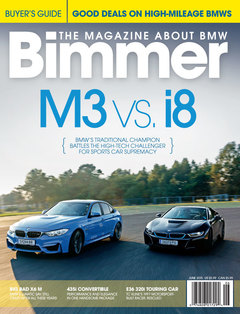