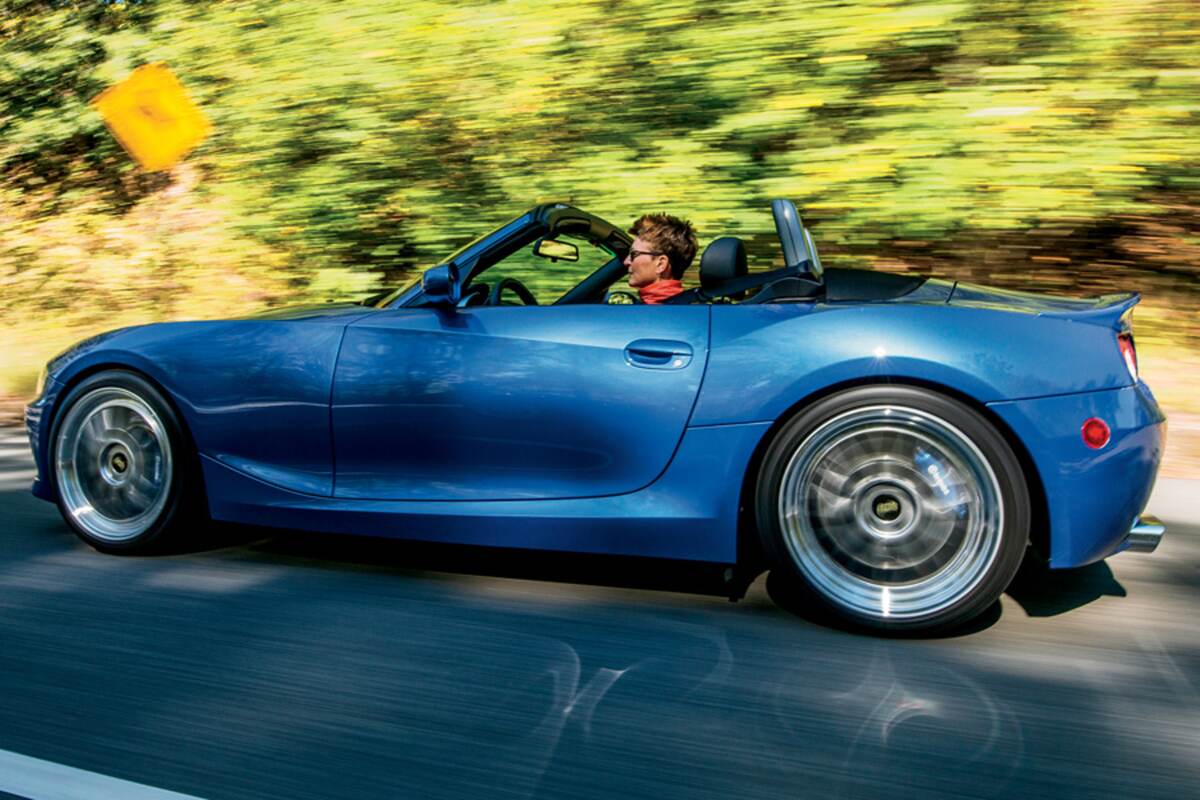 Open the hood of an E85 Z4 and what do you see? A six-cylinder engine, of course, but also an unusual amount of space. Most modern BMW engine bays are packed full of engine and ancillaries, but the Z4’s looks like it was designed to accommodate a much larger engine than that inline six…something in a Vee configuration, perhaps.

Hartge of Germany looked at all that space and figured a V10 would fit right in, and they created a legendary monster by swapping the Z4’s pedestrian six for a 500-hp S85 borrowed from an E60 M5.

The guys at Rogue Engineering watched Hartge’s video of the installation on YouTube while hanging out in their Saddle River, New Jersey shop, and they knew they’d follow Hartge into the engine-swap abyss. 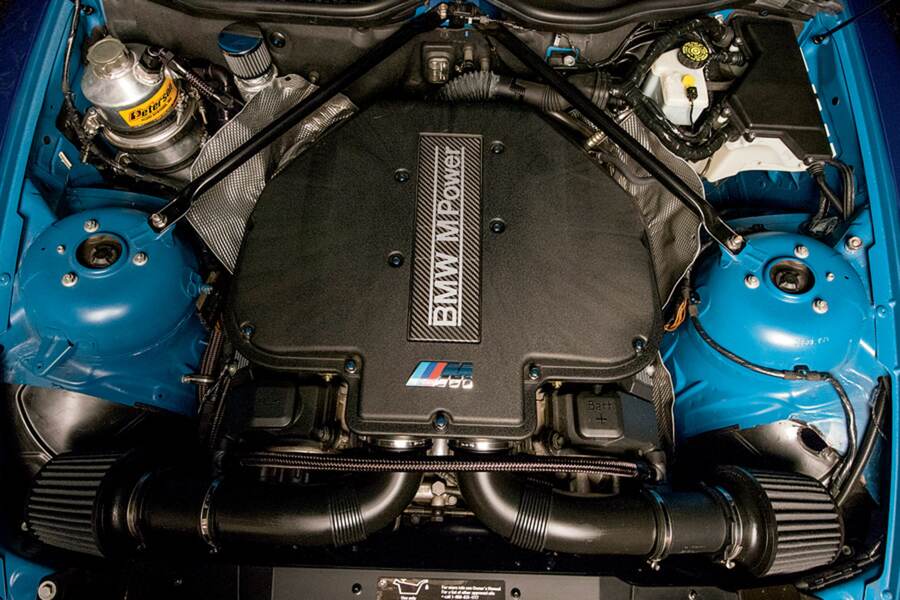 “By the end of the video, we were all smiling ear to ear,” Rogue co-owner Mark Sinclair recalls. “I knew then that I had to have this car.”

“Then” was more than ten years ago. “This car” is the 2004 Z4 Roadster now powered by an S62 V8…finally, after a decade-long process we started documenting for Bimmer back in 2005. Most engine swaps take months, not years. Why so long for this one?

“To start, taking the car apart and then sending out for paint and bodywork took longer than anticipated,” Sinclair explains. “Remember, this car was red and had about 800 miles on it when we started.” 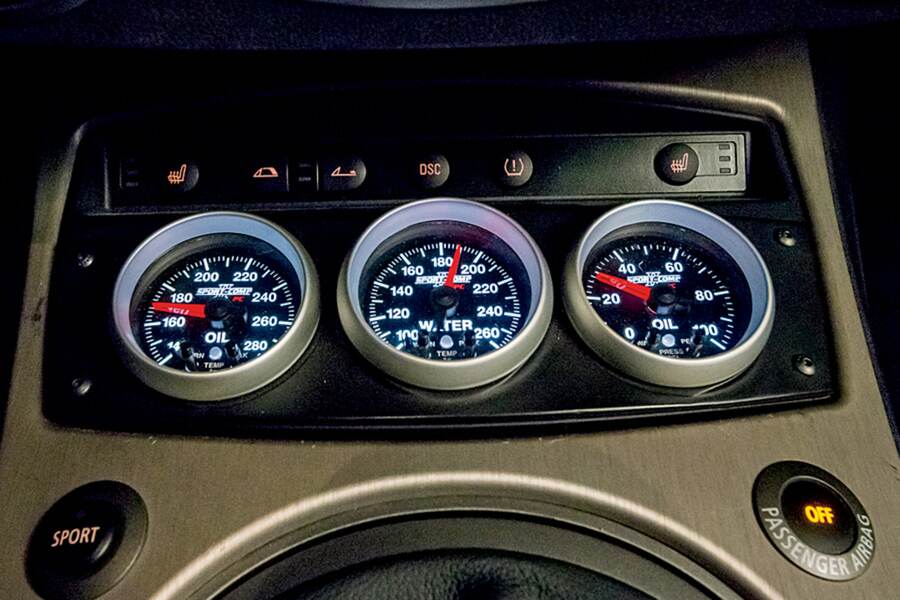 Good paint takes time, and the Estoril Blue sprayed by C&D Auto Body in South Hackensack, New Jersey is as good, if not better, than the Bright Red applied at the factory. It’s impossible to find any traces of that red, by the way, even in the car’s most remote crevices.

The car received more than just a top-notch paint job. It also received a distinctive and quite handsome makeover. Most notably, the Z4’s characteristic slash on the front fenders was removed, along with the side marker lights and BMW roundel.

“I couldn’t stand how much the side marker looked like an afterthought, slapped onto the body,” Sinclair says. “If we were removing it, the bodyline might as well go, too.” 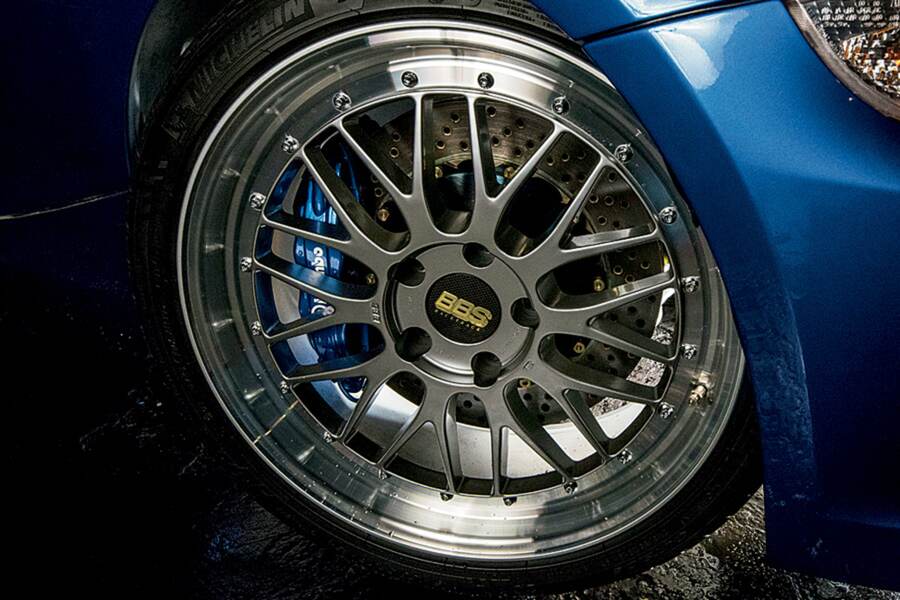 While the sides of the car needed simplification, the rear needed amping up.

“The rear of the car looked like something was missing with the hump on the trunk,” Sinclair recalls. “After doing some searching, I came across the Alpina rear spoiler. It was perfect. It really smoothed out the look of the rear of the car.”

Though the rear spoiler is sold by Alpina only in conjunction with a front spoiler, Sinclair chose not to fit both Alpina parts. Instead, he went with the M-Technic front bumper and side skirts, modifying the stock rear bumper to accept the S62 V8’s dual exhaust. 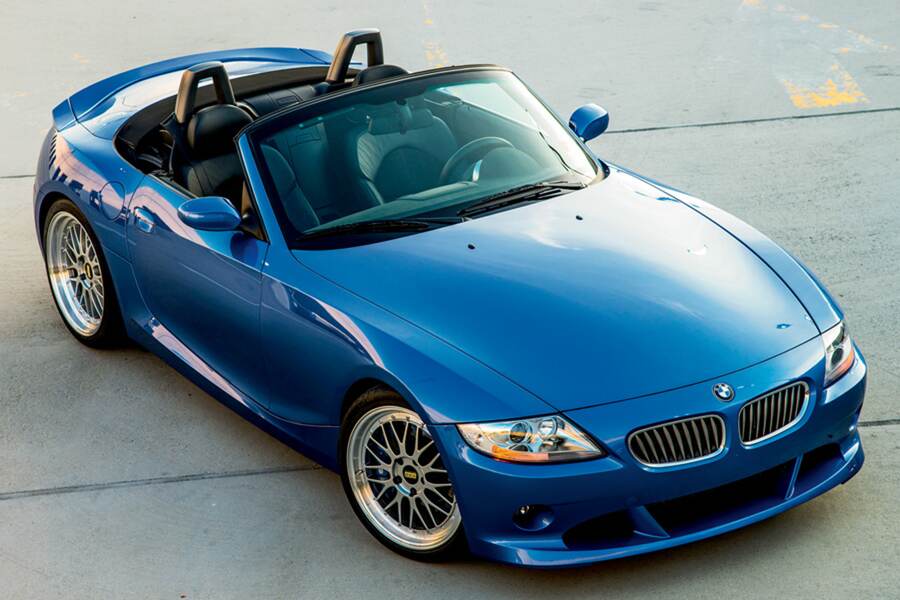 Making room for that exhaust cost the Z4 its stock sound system, which was replaced with an Audison amp and Vocal Polyglass speakers controlled by an Alpine head unit. The cockpit also got E46 M3 seats whose centers (and the door panels) have been enhanced with BMW Motorsport Alcantara cloth inserts. The instrument cluster and steering wheel were borrowed from a Z4 M.

More difficult than most

None of that is unusual on a project car, of course; paint and body work are common components of any customization, and execution rarely takes ten years no matter how complicated the concept. Same for engine swaps, though few turn out to be as difficult as stuffing a V8 engine into a Z4 roadster. 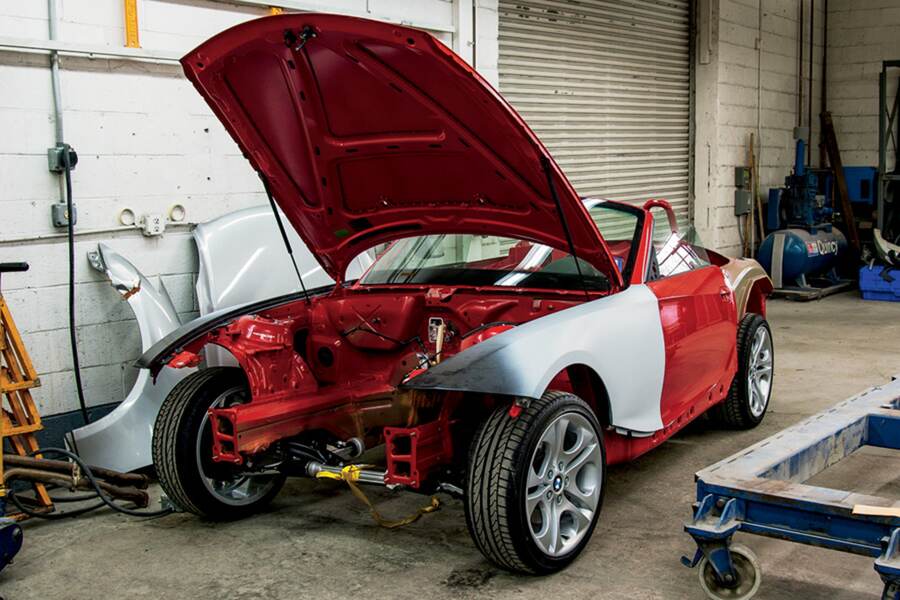 First, Rogue purchased a disassembled 5.0-liter S62 V8 from an E39 M5. The engine was machined by Chuck Stickley before final assembly in-house. Rogue improved air flow through specially fabricated headers and a cat-back exhaust system that ends in rectangular X5 4.6 tips, which combined with the usual computer wizardry brought output from 394 hp to about 450. That’s all simple enough, at least while said V8 is still on the workbench.

When it came time to install the engine in the Z4, however, Rogue found that the roadster’s hood didn’t offer enough clearance to allow retention of the stock oil pan. Mounting the engine low enough to close the hood would require a dry-sump oil system—with which the Rogue team was unfamiliar.

“I had no previous experience with a dry sump setup, so I was completely lost,” Sinclair admits. “Thankfully, we have plenty of friends in the motor-building world who really helped me out and got me to understand how the system worked and how we would adapt it to the car.” 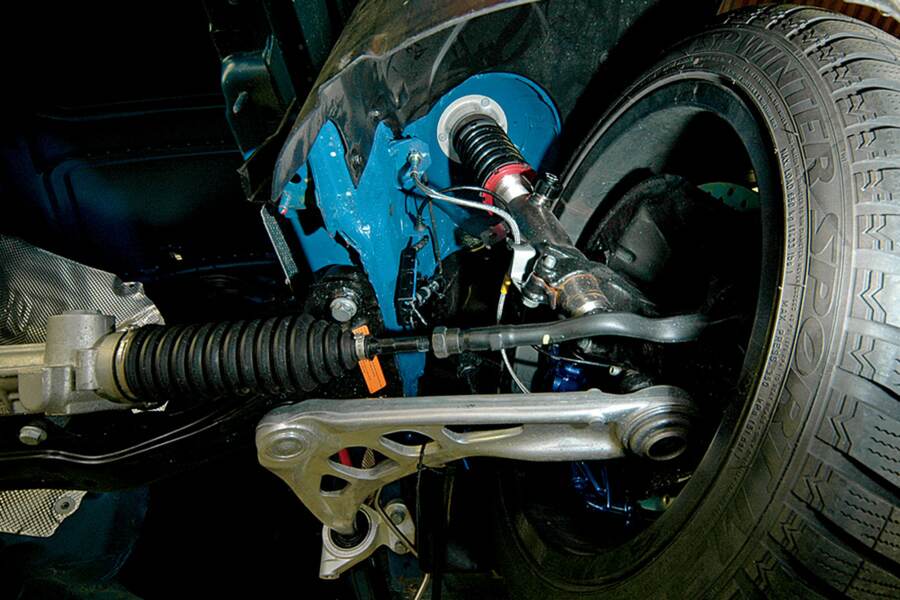 The system includes a custom-fabricated oil cooler, and it holds three gallons of oil in total. Even on 70° days, it takes a rather long time to bring all that oil up to operating temperature; Rogue should probably install a heater for winter starts. That said, the dry sump system eliminates any worry about oil starvation under extreme cornering and braking loads, both of which this car can generate in abundance.

Power is transmitted to the rear wheels through a six-speed manual transmission. Sourced like the engine from an E39 M5, the transmission changes cogs through a modified Rogue Engineering short shift kit, and a custom driveshaft joins it to a differential from an E46 M3. 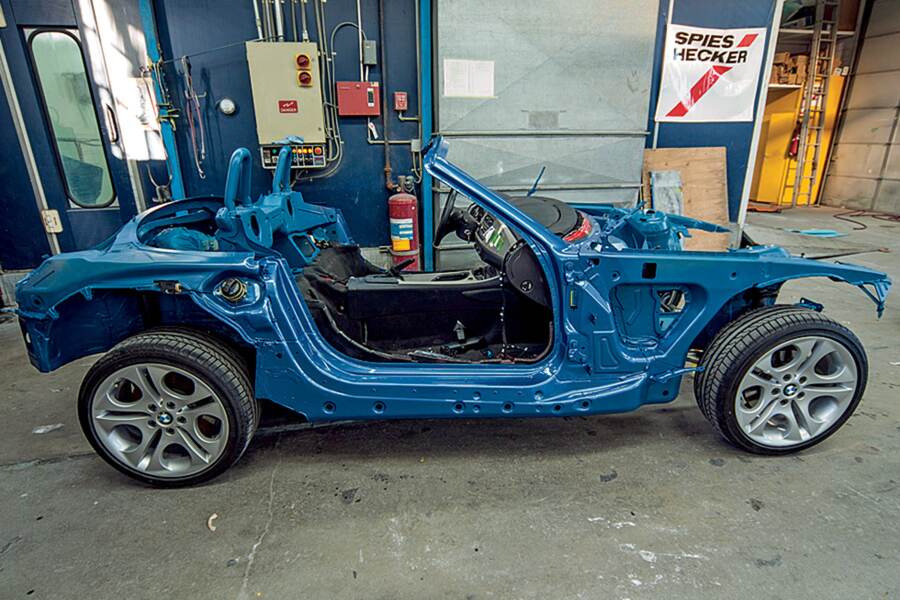 That setup would be perfect with a well-maintained infrastructure, but here in pothole-strewn New Jersey it’s pretty punishing. Cockpit-adjustable dampers would be a desirable addition, at least in lieu of a race track. Bimmer would love to take this Z4 Maximus to a track with smooth pavement, indulgent sound standards and generous run-off room that would allow us to exploit its stellar handling.

Turn-in is sharp, almost biting, and cornering attitude is completely throttle-adjustable. Understeer? Tickle the right pedal! There’s plenty of power from that naturally aspirated V8, and it’s available at a touch of your right foot thanks to the absence of turbos to dull its response. (With that in mind, we’d leave the overworked DSC computer running, especially in the wet.) 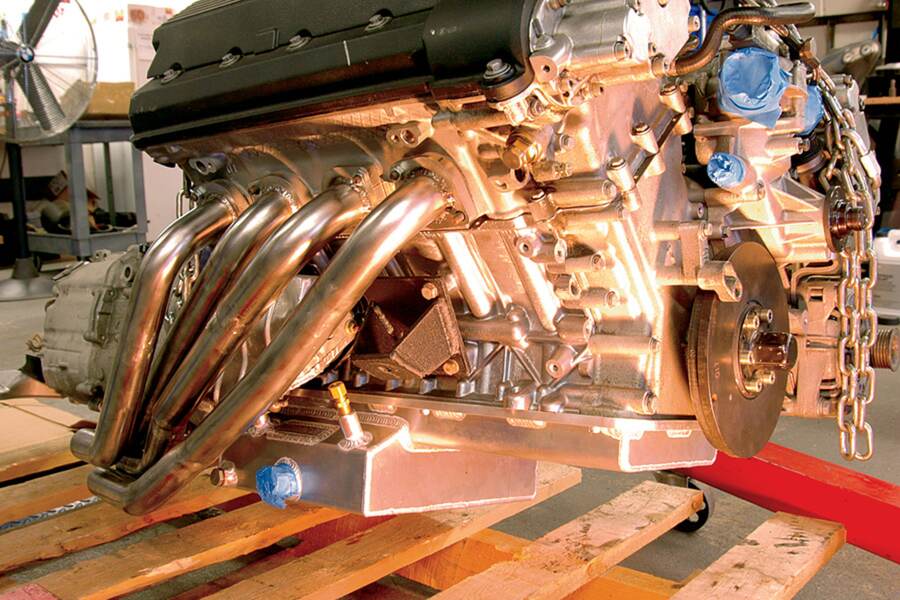 An unrepentant love for speed

This car is unrepentant in its love for speed—the M speedometer will hit triple digits in seconds, and your rear view mirror might alight with flashing red and blue. Tribute will have to be paid.

The sensations arrive with such force and pace that the landscape blurs into an expressionist abstraction. First-gear acceleration completely overwhelms the massive tires, and the forward momentum in second and third gives you pleasurable chest compressions. It’s so fast it threatens to send my brain into “limp-home mode,” as it does the traction control computers that struggle to keep pace with the extreme demands of 450 horsepower in such a small, light car. 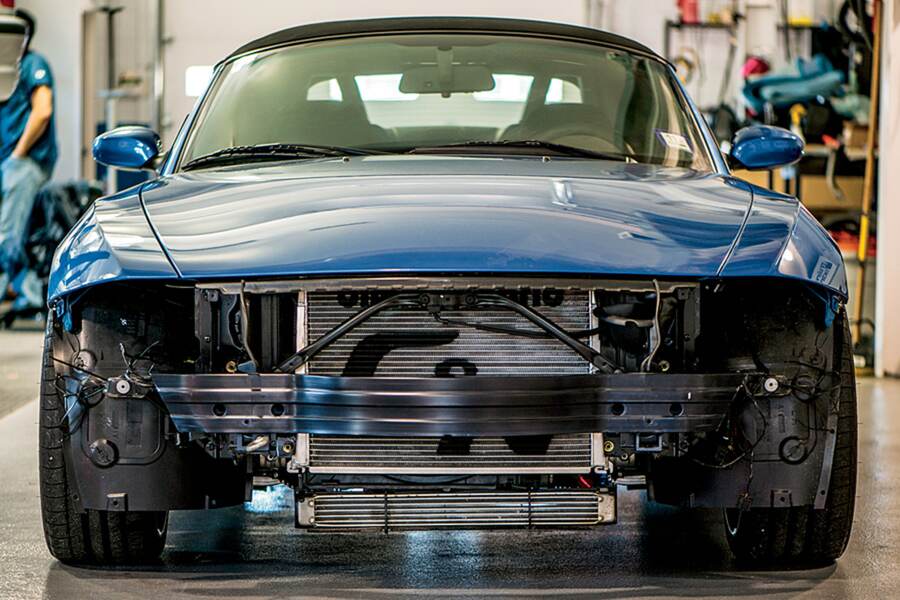 Aside from the intense acceleration, the next best thing about this Z4 is the glorious sound emanating from its dual exhaust pipes. One wants to play with the throttle just to hear it—whole orchestra sections come to life out of that exhaust. For a short outing, this sound is just the right amount of wrong…as perfect as it gets. It might not elicit the same response on longer journeys, but that’s not really what this car is for, anyway.

Instead, it’s all about explosive performance, though it’s equally impressive as an objet d’art. This Z4 is beautifully crafted, and a close examination reveals an ultra-clean roadster that looks like it came from the factory with a V8 engine—or like Rogue Engineering had already built one or two prototypes before building this car.

They hadn’t, of course, which itself explains why the car was so long in the making.

“Mechanical hangups would cost us six months here, seven months there, and not being able to perform some of the necessary modifications in-house really cost us time,” Sinclair says. “We just weren’t set up properly for something of this magnitude—we used to drag it back and forth from one building to the other (in the old facilities) since we only had the one lift back in the day. Thankfully, this could all be handled in-house at the new location now, as we have learned more than we could have imagined on this project.”

Along the way, Sinclair and company succeeded in building a Z4 that surpasses even a Z8 in exclusivity, speed and drama. The aesthetics are highly personal; while the Z8 is an iconic design, the Rogue Z4 represents a more exuberant interpretation of the genre.

No wonder Sinclair is pleased.

“The car has far exceeded my original expectations,” he says. “I can’t help but smile every time I turn the key and hear the motor turn over.”

Asked what he’d do differently if he had the chance to work on another Z4 transformation, Sinclair just laughs.

“I would run the other way!” 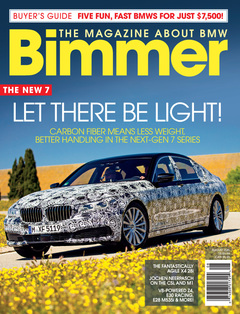