Receiving a new six-cylinder engine and a revised chassis as part of its “Life Cycle Impulse,” the F30 3 Series finally lives up to its promise as a real driver’s car. 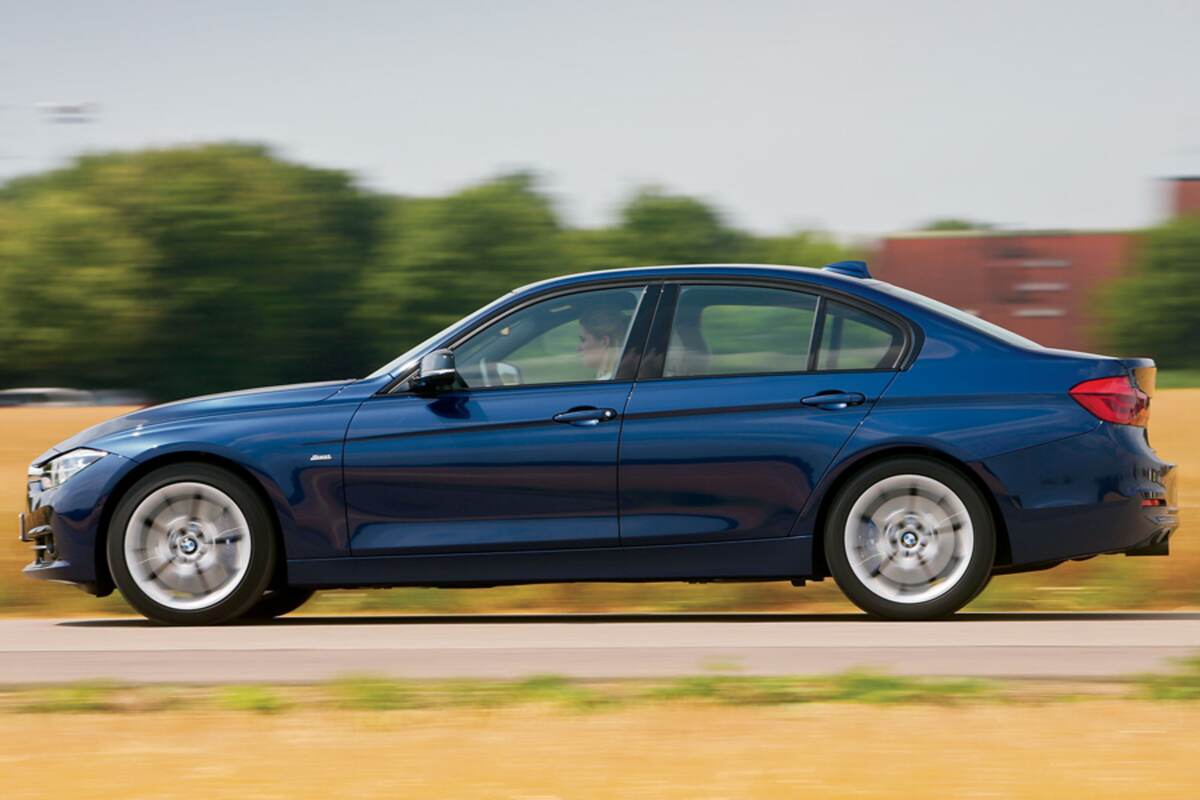 It doesn’t seem that long ago, but my calendar tells me that the current BMW 3 Series (F30) made its debut more than three and a half years ago. Back then, BMW surprised us on the launch in Spain by providing the Catalunya Circuit for our on-the-limit handling trials in the new 328i.

With its new 245-hp 2.0-liter four-cylinder turbocharged engine, the 328i proved responsive, punchy and a lot of fun on the track. In fact, its performance didn’t seem far off that of the more powerful but heavier 306-hp six-cylinder 335i. And with less weight in the nose, the 328i was the sweeter-handling car.

This summer, BMW introduced the “Life Cycle Impulse” version of the F30 in Munich, debuting the facelifted car not with the four-cylinder engine but the new B58 six-cylinder that will soon become available in the next-generation 7 Series, as well. 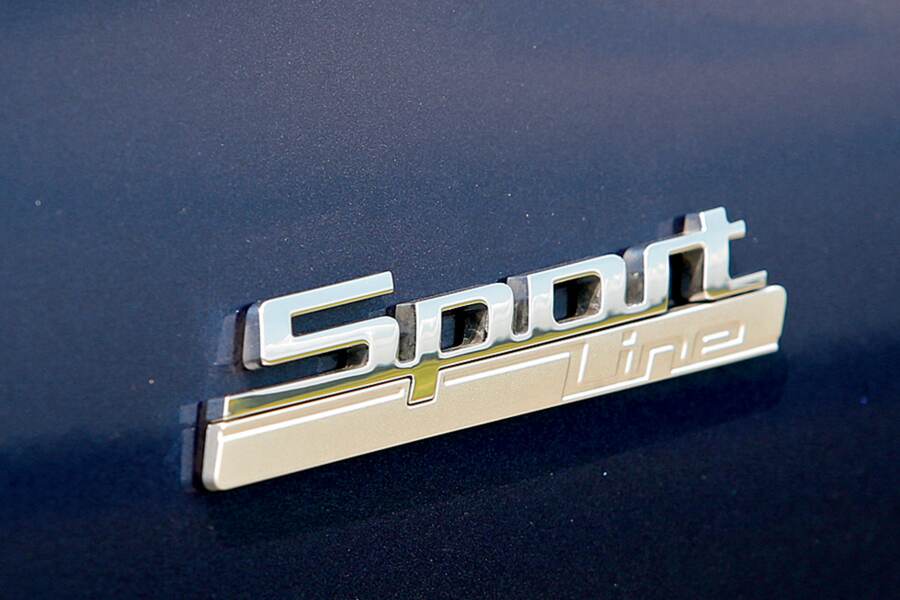 The B58 has the same 2,998cc displacement as its N55 predecessor, but the top-rank 3’s trunk lid badge has gotten an upgrade from 335i to 340i. The new nameplate helps distinguish this car as powered by a member of BMW’s all-new EU6 emissions-compliant modular engine family, which includes three, four and six-cylinder gasoline engines as well as four-cylinder diesel engines.

The new engine carries over many of the N55’s design features, like direct injection, Valvetronic, Double VANOS and TwinPower turbocharging, but it uses a new block, new internals and is slightly lighter. 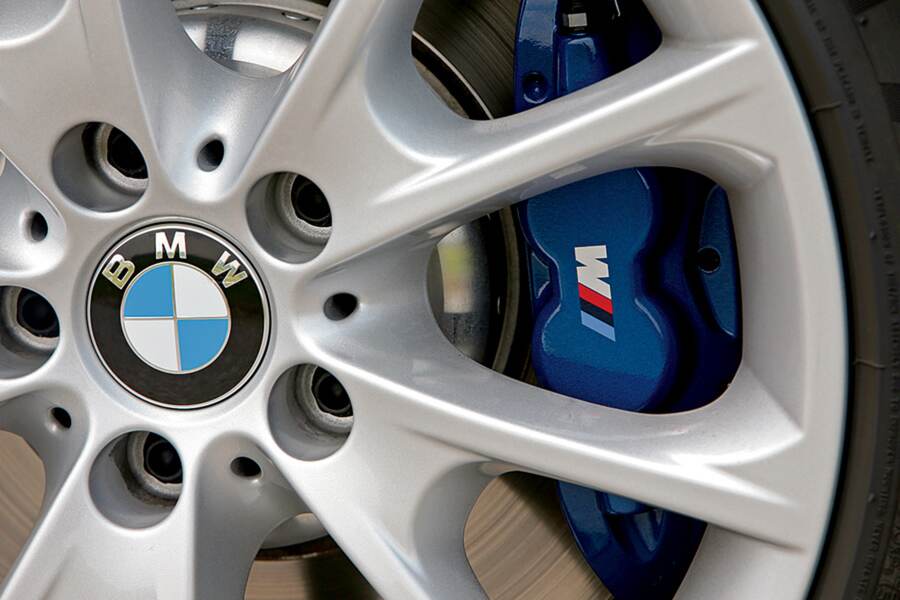 “The major change in the search for better throttle response as well as improved efficiency is the move from air to water cooling for the charge air intercooler system,” says powertrain engineer Andreas Rodewald. “With water cooling, or indirect cooling as we call it internally, heat is removed through an independent water circuit and given off to air.

“The advantages are clear. When you have an air-cooled intercooler in front, you are always pushing a column of air through the system, and this has a negative impact on throttle response. The water-cooled intercooler sits on top of the intake manifold, so the charge airflow path is much shorter, which helps throttle response. Also, you need constant airflow to maintain the same cooling effect on the charge air, which simply does not happen when the car is stationary or driving slowly in traffic, making liquid cooling a better all-round solution.” 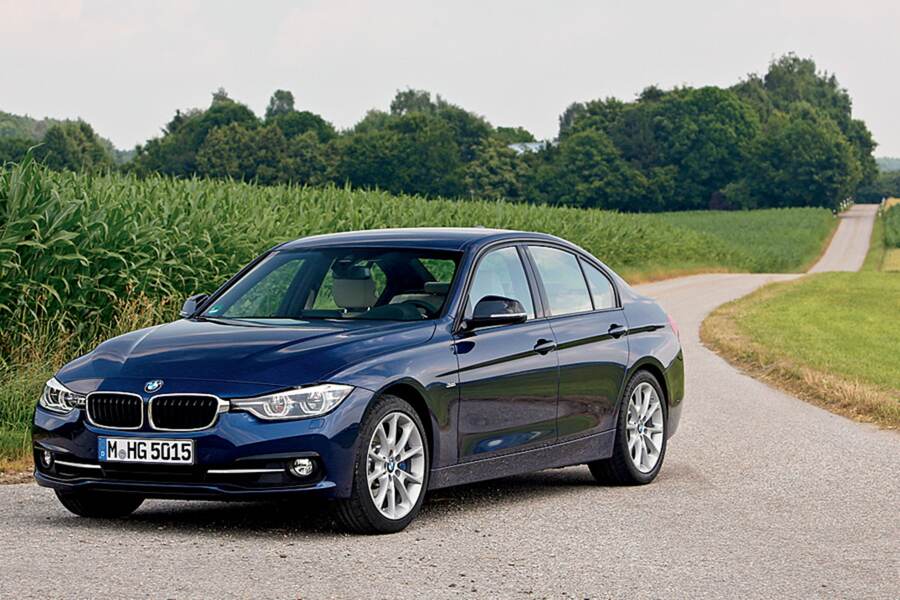 This potent combination punches the 3,366-lb. 340i from 0 to 62 mph in 5.1 seconds with the eight-speed automatic gearbox, 5.2 seconds with the six-speed manual. Top speed is 155 mph with either transmission. [U.S. 0-to-60 times are 4.8 seconds for a 340i with the automatic, 4.6 seconds for the xDrive version. A manual transmission version of the 340i will be offered, but acceleration figures were not available at press time.—Ed.]

Once on the move, the new active heat management module in front takes over. The previous model had a passive, thermostat-controlled unit, which operated only once the engine reached a set temperature. With the new active system, the ECU is able to maximize every advantage to improve efficiency. 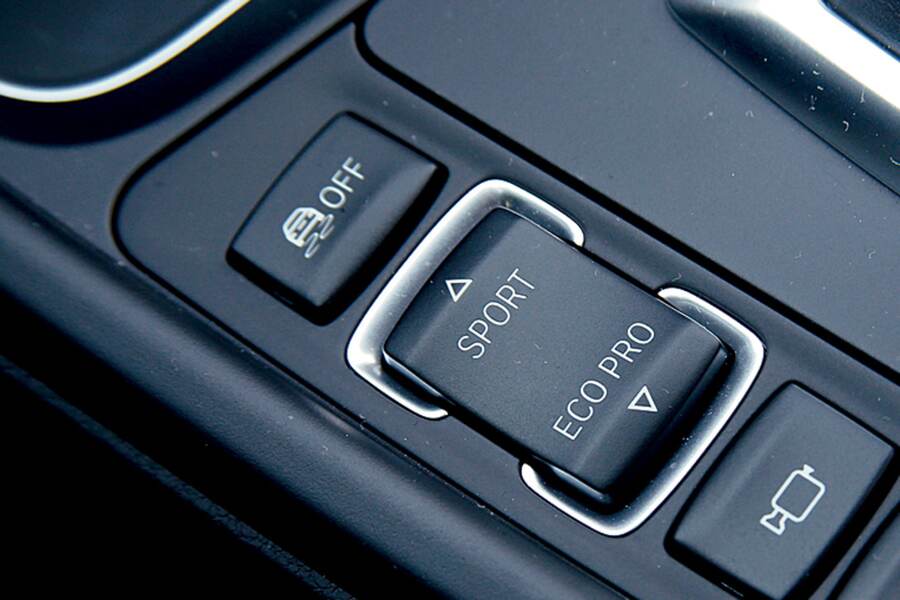 For instance, if it detects sporty driving, it will immediately switch to high cooling mode rather than waiting for the engine to reach a predetermined temperature before it begins to throw off excess heat like the old system did. All this contributes to lower emissions as well as improved cabin heating and engine cooling.

I asked how engine encapsulation will affect engine temperatures in hot climates like Arizona or the Middle East. “This is not an issue,” says Rodewald. “Most of the cooling is done by the liquid cooling circuit, and the heat radiated by the alloy engine’s surface is relatively small.”

Other features of the B58 six are a new high-pressure fuel pump integrated into the cylinder head and driven off the camshaft; on the outgoing N55 motor, this pump was on the side of the engine, driven by chain from the crankshaft. A new oil pump in the alloy sump incorporates a vacuum pump for brake actuation. 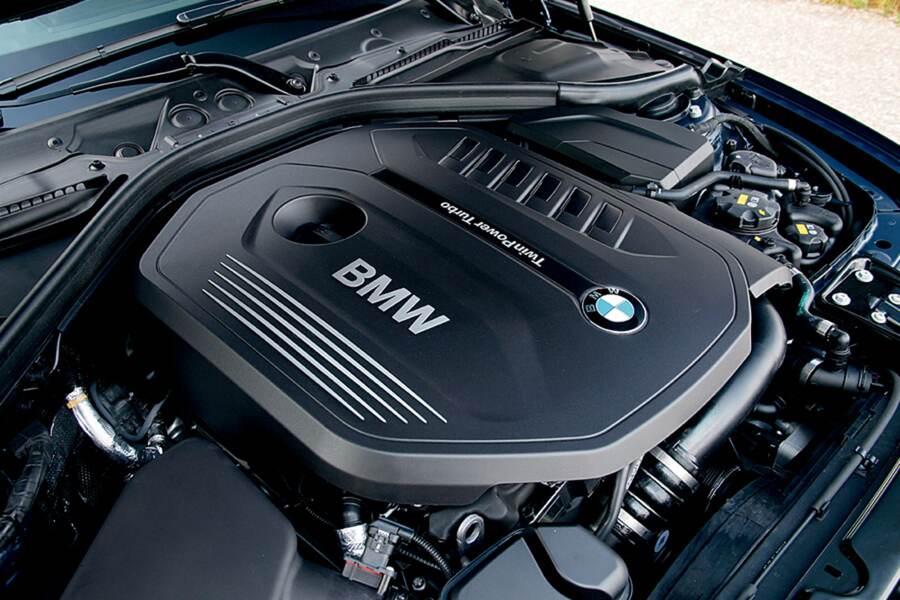 The twin scroll turbocharger is integrated into the new exhaust manifold, a design that ensures quicker throttle response as well as faster lighting off of the catalyst from cold, again benefitting emissions.

On the road, this new engine proves to be a masterpiece of the engineer’s art. Creamy smooth, it has power and torque everywhere, an impression reinforced by the eight closely spaced forward ratios of the ZF automatic in my test car. The new turbocharger and intercooler design have definitely improved throttle response, and strong acceleration is always just a heartbeat away.

In ECO or Comfort mode, the combination of engine and gearbox is sublime, and you feel you are being propelled down the road by a quiet turbine. Part-throttle cruising is very restful, the engine fading into the background and disappearing totally at times. 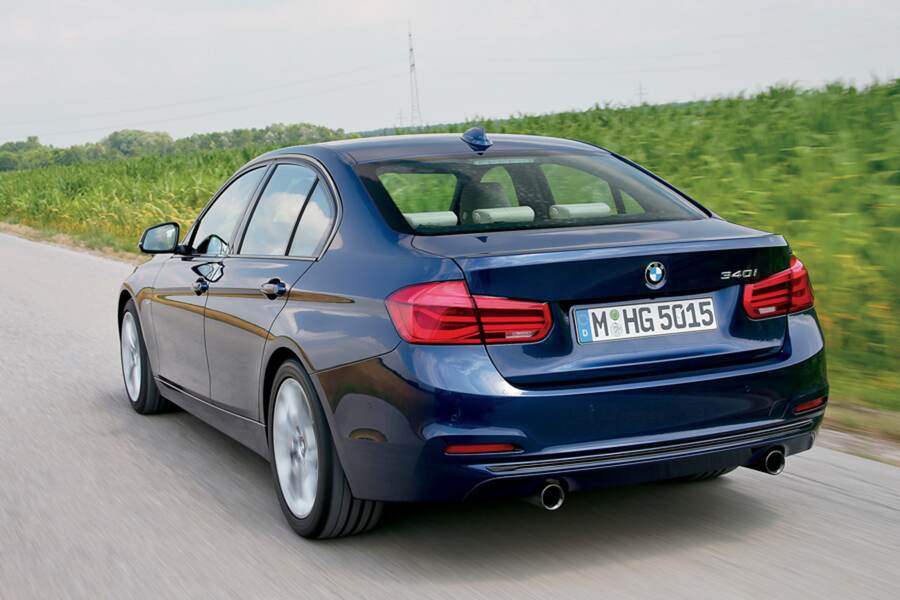 The counterpoint arrives when you select Sport mode. The silky-smooth cruiser tightens up in all respects, becoming a compact sport sedan perfectly set up to attack twisty roads with a hearty, straight-six snarl when pushed to redline.

Improvements to steering and chassis

The electro-hydraulic power steering (EPS) is unchanged mechanically, but the software controlling boost and damping has been recalibrated. The EPS software tweaks do not make a huge difference to the feel at the helm, but the steering feels in league with the uprated chassis, which is the most important thing. 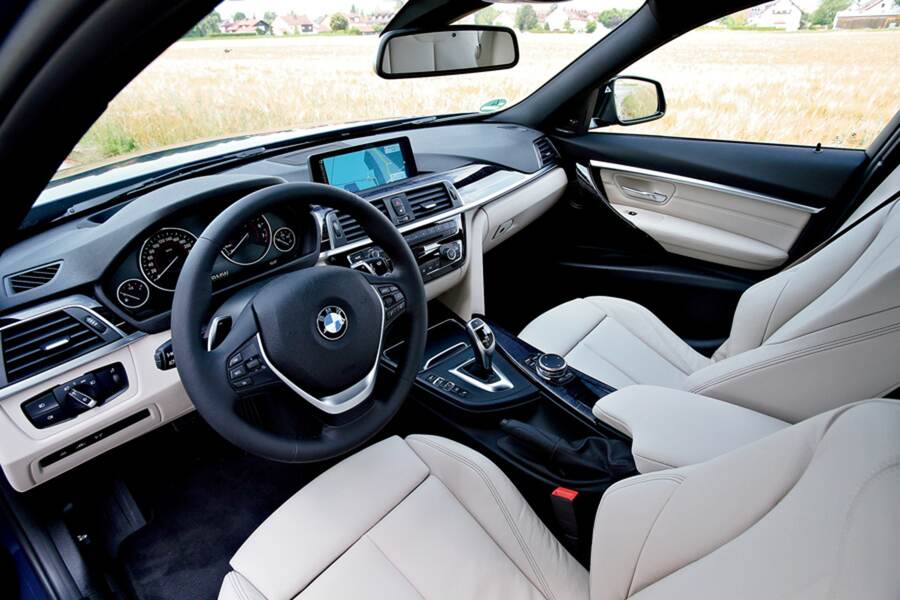 “A lot of what you feel is down to the chassis tuning and tire characteristics,” explained Florian Dietrich, who managed the Driving Dynamics team. “We strengthened the suspension mounting points to the body to make them more rigid. This improved resistance to lateral and fore-and-aft movement under high loadings keeps the suspension behavior more consistent. Coupled to improved damper performance and steering software, the result is a more agile and responsive car that also rolls less.”

In addition to the standard and M Sport options, BMW offers the 340i with Adaptive M Suspension, whose electronically controlled dampers allow the driver to change the car’s dynamic chassis responses at the touch of a button.

First seen on the M235i, this system uses sensors that monitor longitudinal and lateral acceleration, speed and steering angle. The ECU then matches the damping to road surface conditions and driver input. It improves roadholding by applying more damping to control small suspension movements without a negative impact on comfort. It also uses long (10 to 15mm) bump stops to ensure a progressive end to spring travel.

While the xDrive variants require a minimum of ground clearance and so aren’t lowered, rear-wheel drive cars with Adaptive M Suspension feature a 10mm lower ride height to maximize handling and roadholding. Using the Driving Experience Control switch, the driver can choose between comfort and sporty characteristics.

So how does this work out on the road? First of all, all our test cars with this chassis option also eschewed run-flats, instead riding on 225/45ZR-18 Michelin Pilot Super Sport tires, which Dietrich said was BMW’s tire of choice for this setup. [It remains to be seen whether a non-run-flat tire option will be available in the U.S., but we doubt that it will.—Ed.]

Dietrich explained that the active damping effectively broadens the dampers’ performance envelope, delivering more comfort at one end and better handling and grip at the other. This indeed proved to be the case on the test routes, although I have to say I much preferred the better body control of Sport mode and ran this way for most of the route. In Comfort mode, I could feel greater body movement and the tendency to pitch under turn-in and throttle-up. It might be okay around town, but on the open road, Sport was my default mode.

In reality, the base 3 Series setup is pretty sweet, and M Sport will please the press-on types. I am not sure I would bother with Adaptive Suspension, which frankly I couldn’t get as excited about as I had the Airmatic suspension on the 3 Series’ Mercedes C-Class rival.

The chassis improvements alone make the revised 3 Series a better car than ever, and the 326-hp B58 in the 340i is the new gold standard for engines in its class. I’d have one in a heartbeat, but with the M Sport suspension please! 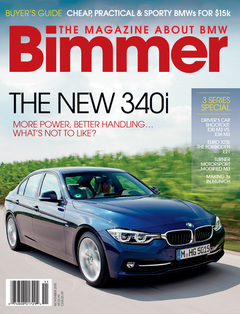