Built from 1999 to 2006, the E46 coupes represented the culmination of decades of engineering tradition at BMW. Even today, E46 coupes like this 328Ci deliver a timelessly rewarding driving experience. 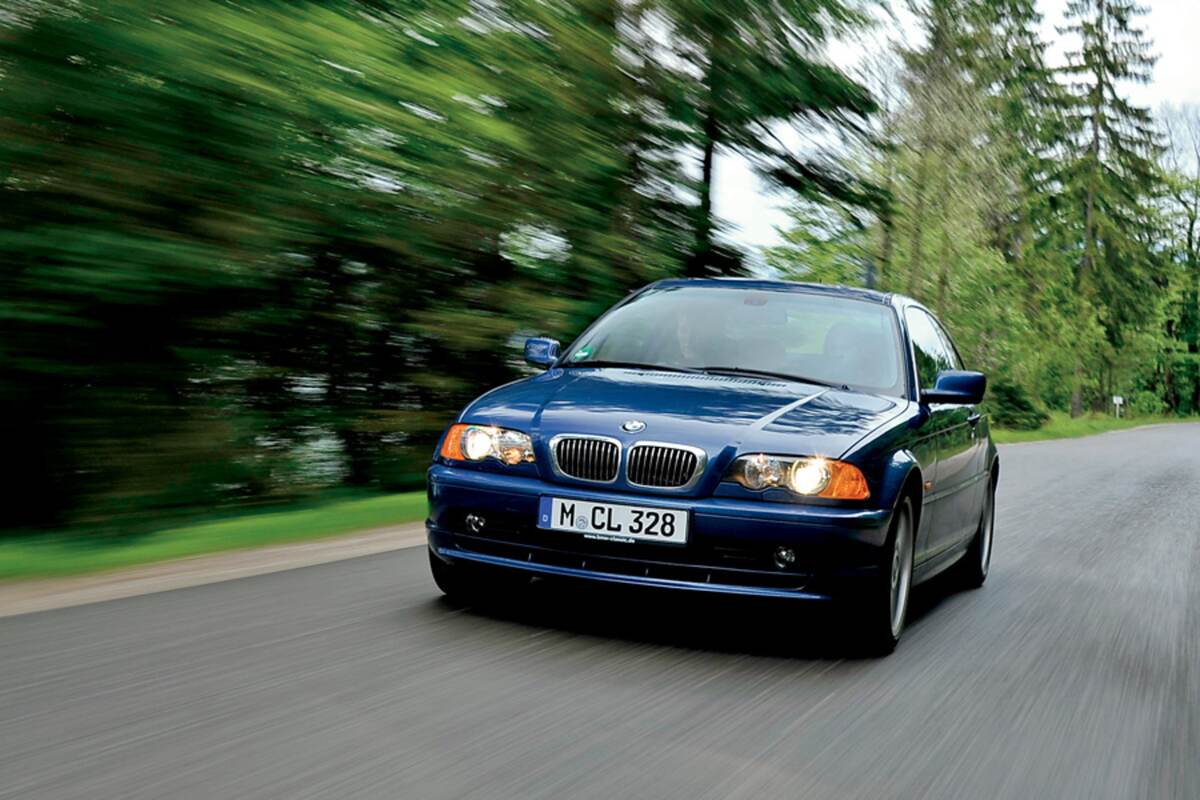 When you get into a car that’s neither new nor old but somewhere in between, the timeless and familiar are always counterbalanced by the outmoded and obsolete. More often than not, the latter are electronic.
As an example, consider the 1999 E46 328Ci you see here. Its body is still alluring, its performance sublime, yet its in-car electronics have become almost comically obsolete in the 17 years since this car was built. The driver-oriented cockpit is beautifully crafted and ergonomically excellent, and it looks stylish and contemporary until you spot the cassette deck and navigation system set smack-dab in the center of the dash.
Seventeen years have seen a lot of changes to in-car infotainment systems, but that cassette deck was already out of date when this car left the line in Munich. By 1999, compact discs had been the dominant music format for over a decade, yet a CD player remained optional at BMW and commanded a $200 premium. A CD player is the BMW standard these days, but who plays CDs any more? To be au courant in this age of digital downloads, you’ll need to order the optional smartphone integration for $350.
The E46’s navigation system still works, presumably, but its processing speed is so slow you’ll have reached your destination before you’ve had time to program it in, and God help you if you make a mistake and have to start over. For that, buyers paid an $1,800 premium, only a bit cheaper in relative terms than today’s $2,750 Technology Package. Which, given the pace of change these days, is bound to become obsolete even faster than a 1999 nav system.

Timeless design and traditional virtues
Some things defy change, however, and therefore obsolescence. Good design is timeless, and the E46 coupe is unmistakable as such, inside and out. Erik Goplen’s styling updated the modern BMW coupe form established a generation earlier by Boyke Boyer’s E36, softening its edges and adding volume to its flanks. The design has aged remarkably well, and today it looks more classic than old, even when seen next to newer BMWs.
When the 3 Series coupe launched in Europe in 1999, BMW called it “the athlete of the 3 Series.” By today’s standards, its performance is that of an age-group Master rather than a current Olympian. It’s no longer state of the art, but it’s still a damn fine drive in real-world conditions.
The 2,793cc M52 six-cylinder engine was already five years old by 1999, so the E46 coupes got the Technically Updated version issued a year earlier. All M52s have aluminum blocks, and the Technical Update added a second VANOS unit for variable valve timing on both intake and exhaust cams. Double VANOS produces smoother, more consistent power throughout the rev range, and it also helps the engine put out its 210 lb-ft of peak torque at 3,500 rpm rather than 3,950, thanks also to a dual-resonance intake system that varies intake runner length according to engine speed. Horsepower remained at 193, peaking at a slightly higher 5,500 rpm rather than 5,300 in the original M52.
It’s an exceptionally sweet engine. It feels a little slower to rev than the M54 that succeeded it, most likely because of heavier internal components like pistons and connecting rods, but it’s still a satisfying engine to feel underfoot. This is the last of the BMW sixes whose throttle is actuated by a linkage rather than a rheostat, and you can really feel that mechanical connection when you press the throttle. It’s not as instantaneous as a drive-by-wire system, but it’s more feelsome, for sure.
The power output is just enough to make this car fun at real-world speeds on twisty roads, where snappy corner exits are more important than neck-snapping acceleration. And because all of its power is produced without forced induction, it feels like every one of those horses and lb-ft are real, organic.
The 328Ci’s claimed 0-to-60 mph time was 6.6 seconds with the ZF Type C five-speed manual, 7.2 seconds with the optional GM five-speed automatic. In 1999, a skilled driver could still outperform an automatic transmission, a fact that seems particularly illuminating. This E46 is still reasonably quick, but going quickly in it requires that the driver be fully engaged in the process.
Driving in the Alps, conserving momentum is vital when there’s not much engine power to play with, and so is being in the right gear for the corner exit, braking properly and getting on the throttle at exactly the right moment when the car passes the apex.
All of that seems easily done in this 328Ci, making the long-time BMW driver feel right at home behind the wheel. This car delivers the kind of civilized performance that characterized BMWs in the pre-turbo era, before the cars were deemed inadequate with anything less than 300 hp.
This 328Ci’s steering is excellent, delivering ample and precise information through its fat, leather-wrapped wheel. This isn’t true of every E46, even though they all used hydraulic assist. BMW really lost the plot at some point in E46 production, giving these cars steering that wandered on-center and had far too much boost throughout. This one happens to be just right, with a 15.5:1 rack ratio and engine-speed sensitive power assist, but that’s largely a matter of luck when it comes to E46s.

A quantum leap in comfort…and chassis stiffness
In addition to a skilled driver, keeping a brisk pace through the corners requires a great-handling car. On that count, the E46 excels again, at least in real-world conditions.
Technically, the E46 raised the bar considerably compared to its predecessor. I’d driven an E36 sedan right before I got into this car, and the difference was astonishing. In addition to having far more potential in the corners, the E46 felt so much more solid, so much quieter and better put together—yet the E46 coupe weighs just 55 lbs. more than the earlier E36, tipping the scales at a modest 3,197 lbs.
With the E46, BMW set out to make a quantum leap in terms of vehicle comfort, and that meant making the car impervious to certain types of vibration (engine idle, wheel imbalance, etc.). High torsional stiffness was crucial, and the E46 was built to be twice as stiff as the E36 in static measurement, requiring 14,751 lb-ft of force to move it by one degree. (I couldn’t find the same measurement for the standard E36 coupe but unearthed a figure of 8,039 lb-ft/deg for the E36 M3.)
The stiffer chassis made the car not only more comfortable but better handling, too, particularly when combined with substantial improvements to the suspension. Up front, BMW relied on the “proven” MacPherson strut design, improving it with forged aluminum lower arms and hollow strut rods to reduce unsprung weight by 5.5 lbs. overall at the front axle. That lessens the strain on the struts and helps the wheels maintain better contact with the pavement; revised geometry helps with that, too, and so do wider tracks. Here the E46 saw another big improvement, with track widths that measure 57.9 inches front/58.2 inches rear compared to the E36’s 55.4/55.9 inches.
At the rear, BMW stuck with the multi-link system first seen on the E36, again refining it for better roadholding with aluminum links and a redsigned subframe that carried the suspension and differential more rigidly than before. The car I drove has sport suspension and the optional 18-inch Alpina-style radial spoke alloy wheels, mounted with 225/45 front and 245/40 rear Michelin radial tires. Mechanical grip is terrific, and the car scarcely needs the Dynamic Stability Control that became standard with these coupes in 1999.
Overall, it’s a much better-handling car than the E36 it replaced. It’s also more fun to drive, something that isn’t a given when cars are “improved.” The E46 represented a necessary advance over the somewhat underengineered E36, but the still-more-sophisticated E90 that followed wasn’t as tactile or as much fun to drive. That puts the E46 in the sweet spot for automotive engineering, right where human-scale driving pleasure intersects with technical competence. A newer BMW would surely display more handling prowess on the track, but it wouldn’t have that “just right” feeling of the older BMW on twisty roads.
Its 193-hp engine and in-dash cassette player might make this E46 seem outmoded at first glance, but the driving experience it delivers remains satisfying to this day. I got into this Topaz Blue 328Ci with few expectations, but I got out of it a couple of hours later thinking I could live with one for a very long time, and quite happily at that. 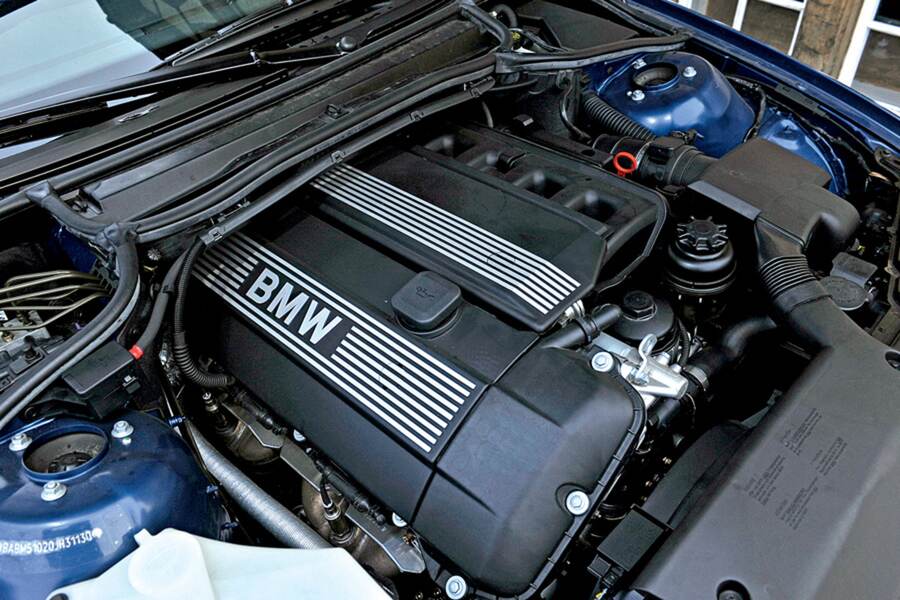 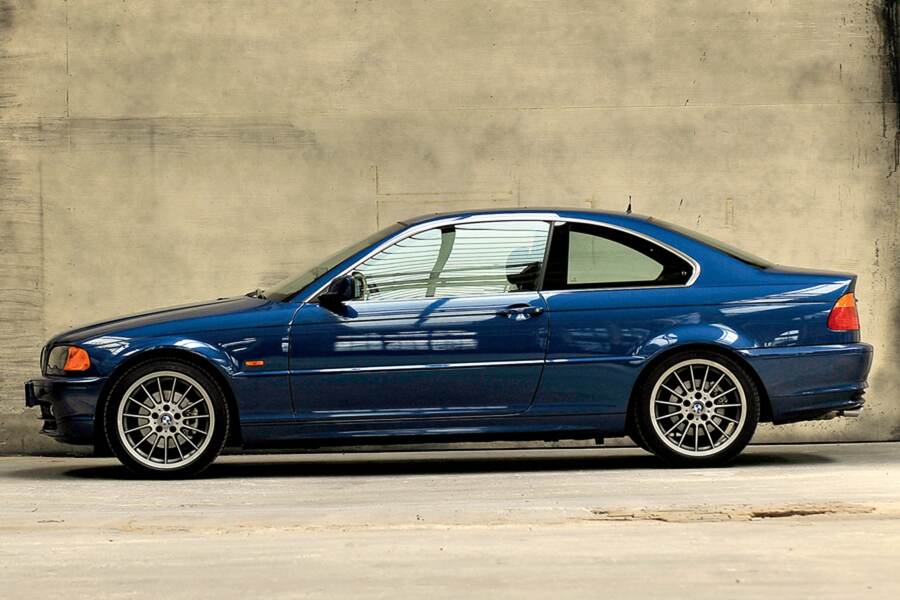 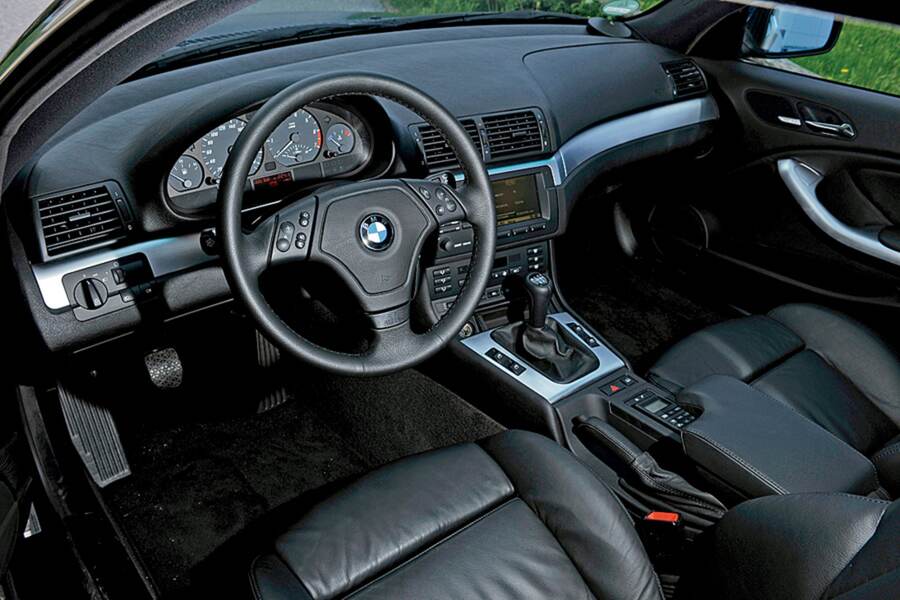 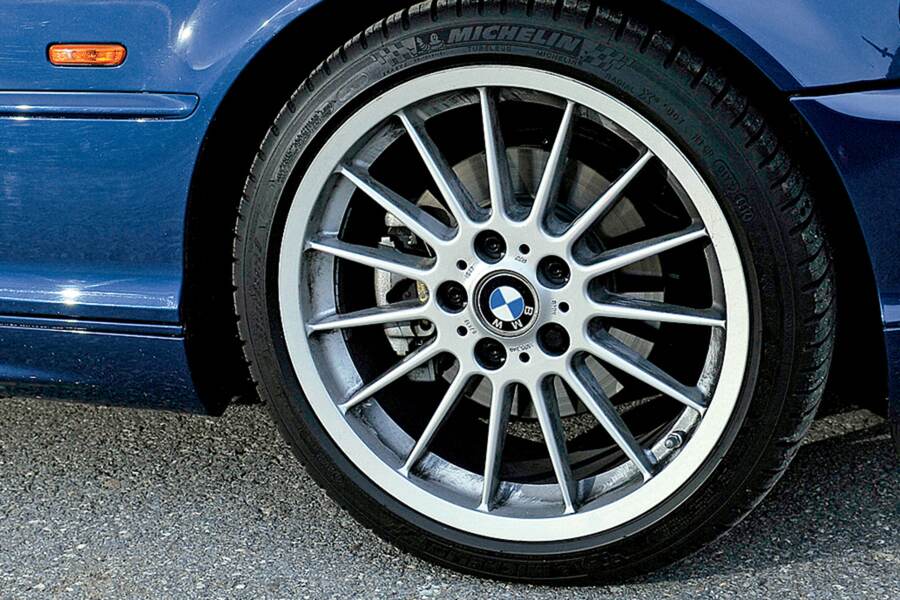 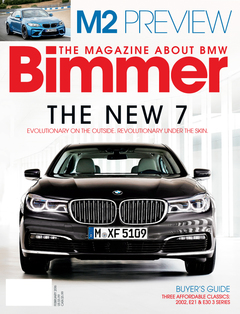