When it comes to driving fun, we know that handling is more important than power, but how much torque is the absolute minimum? To find out, we drive a pair of relatively low-torque BMWs: the E30 M3 and its tax-dodging cousin, the E30 320is. 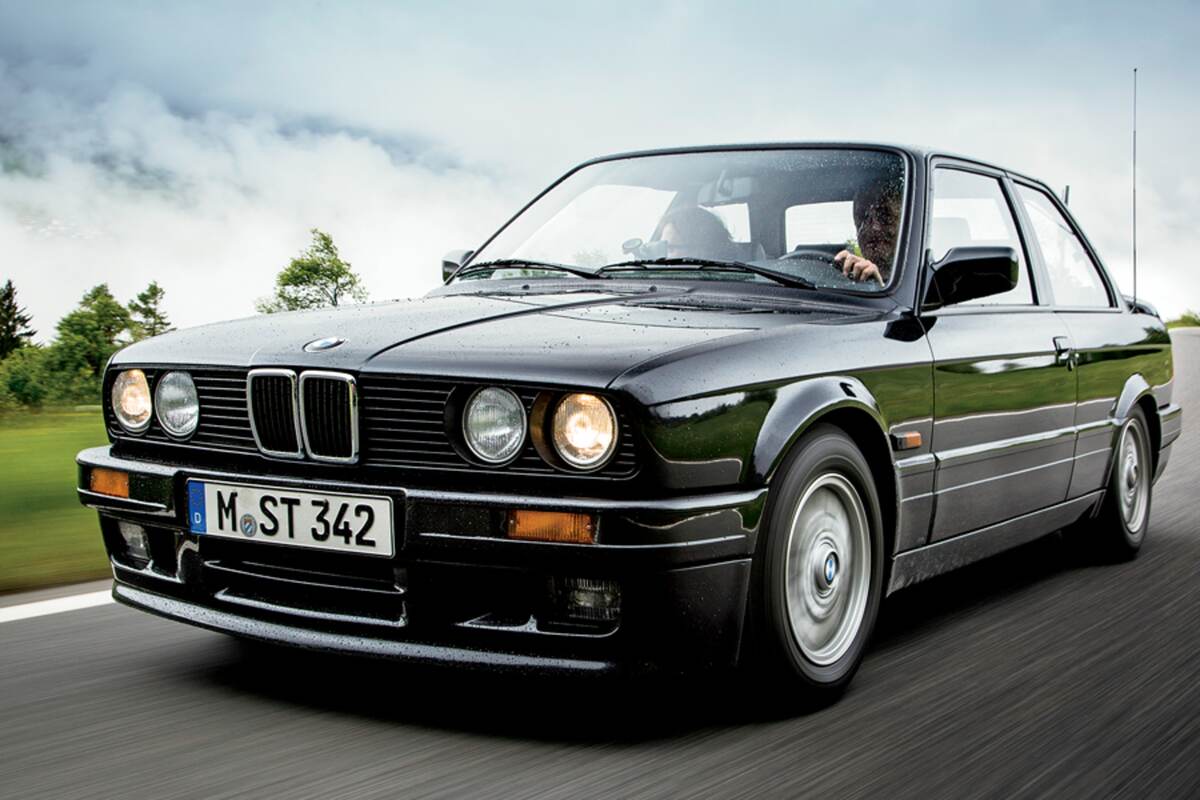 In the olden days, BMW’s engines were rev-hungry little things, small-displacement wonders that made most of their power at the top of the tach. The M engines, especially, favored high revs and time-in-gear over torque. The cars weren’t quick off the line, but once underway they could outpace those with far more power through sheer momentum thanks to high redlines and agile handling.

The advent of turbocharging changed the equation, making high-revving horsepower secondary to torque developed right off idle. Even the M cars have seen the balance shift from high engine speeds to big torque, and it only makes sense: Once curb weights crest 3,500 lbs. in even the most compact models, you need all that torque just to get things rolling. Handling doesn’t exactly improve with higher curb weights, either, requiring massive tires and sophisticated electronics just to keep everything from flying off the road.

In light of all that, it’s easy to be nostalgic for the simpler days of sub-3,000 lb. cars and high-revving engines, but are low-torque BMWs all that fun to drive? Won’t we miss having 300 or 400 lb-ft at the slightest press of the throttle? 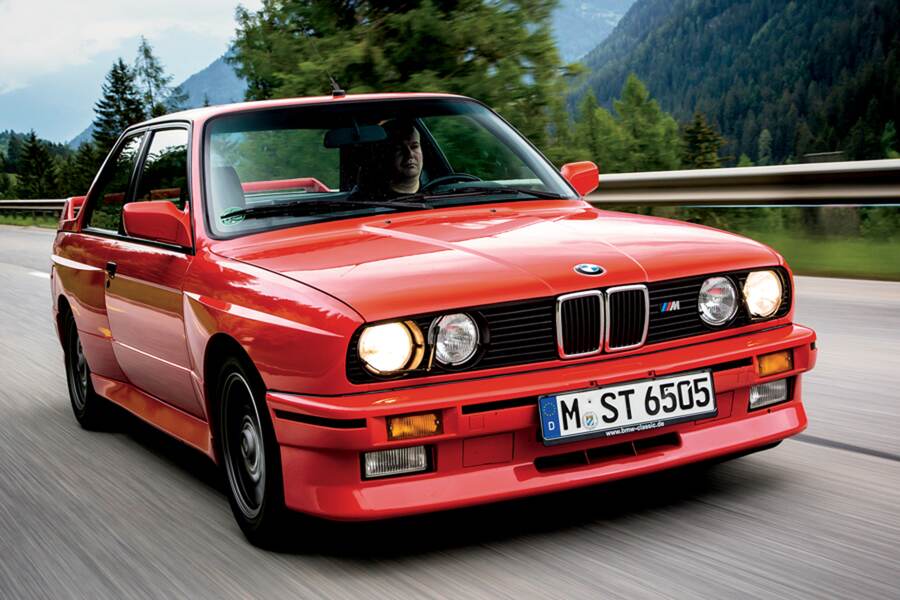 There’s only one way to find out, and that’s to drive a pair of BMWs known for their modest torque outputs: the E30 M3 and its Italian cousin, the E30 320is. The E30 M3 is no torque monster, and the 320is suffers an even greater deficit, powered as it is by a downsized S14 that has even less pulling power than the M3’s. To further accentuate the torque deficit, we’ll be driving these cars over the Alps from Italy’s Lake Como to Munich.

“Too much ain’t enough,” as Tom Petty sings, but too little might be just right. 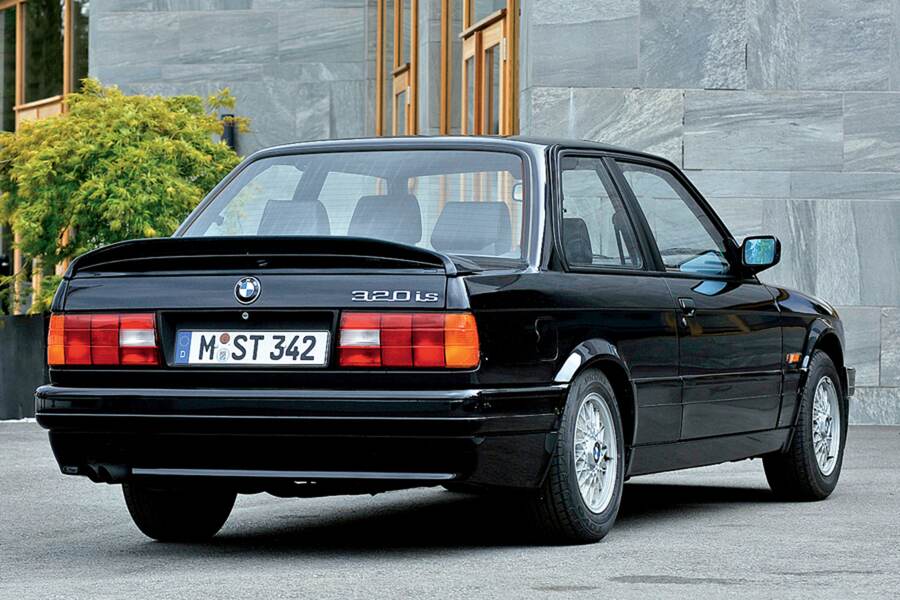 The first car we’ll drive is a 1989 320is, one of 3,748 built for the Italian and Portuguese markets. There, tax laws in the late 1980s added a 20% penalty on top of the price of any vehicle whose engine displaced more than 2.0 liters. That meant that an E30 M3 with a 2.3-liter S14 engine cost about €6,000 in addition to its MSRP of around €30,000, making it prohibitively expensive for all but the most dedicated enthusiasts.

A 2.0-liter M3 was considered but never built; writing in Bimmer #81, Alex Palevsky speculated that BMW Motorsport opposed the dilution of the existing 2.3-liter M3, especially as a 2.0-liter version wouldn’t have counted toward homologation requirements for racing. (They’d been met by March 1, 1987 in any case.)

BMW sold E30 M3s in Italy and Portugal despite the surcharge, and it also created the 320is as a consolation price for those of more modest means. BMW Motorsport had no problem building a 2.0-liter S14 if not a complete car, and the engines were sent to the 3 Series’ Munich assembly line for the start of production in September 1987. Initially, the smaller S14s were installed only in the E30 four-door, and the first 320is sedans were essentially base-model E30s that didn’t even have Sport suspension as standard. They were, however, fitted with the larger brakes from the six-cylinder cars. 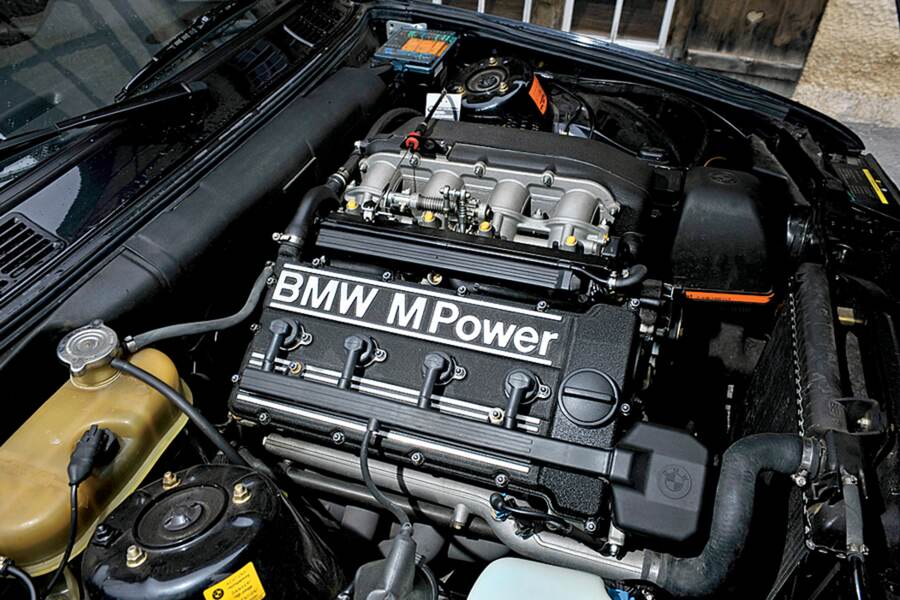 Six months later, the 320is also became available as a two-door like the one we’re driving today. They didn’t have the M3’s fender flares or 16-inch wheels, but the two-door cars left the factory with a full complement of M-Technic parts: spoilers, steering wheel, seats, springs and shocks.

Those may seem like negligible figures on paper, but you notice the 320is’ lack of torque the moment you get underway. Slotting the dogleg five-speed into first, the car feels torque-deficient just leaving the hotel driveway. Making a left turn into traffic requires plenty of throttle along with an appropriate gap between cars. This engine needs revs to make power, and not just ponies: Even its modest 155 lb-ft torque peak doesn’t come in until 4,900 rpm, and most of its useful power lies between there and the 7,300-rpm redline. 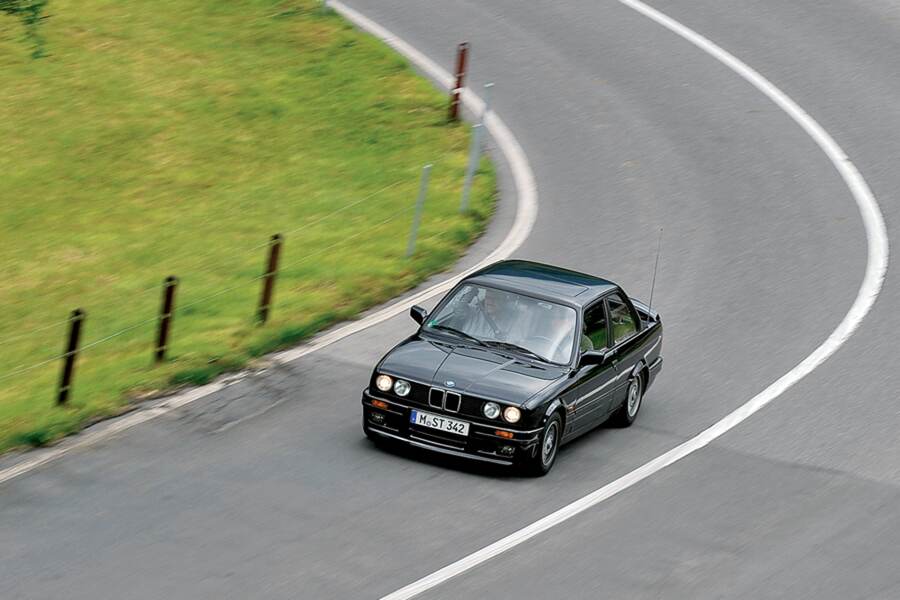 As we leave Lake Como for the mountains, the 320is’ torque shortage threatens to negate the E30’s inherent handling excellence—at least until we start driving as manically as it requires. That means braking as little as possible, keeping the engine above 5,000 rpm and getting to full throttle as soon as we’ve passed the apex of each turn. With so little power, there’s no risk of oversteer, so it’s all about conserving momentum.

Maintaining a brisk pace in the 320is is an exercise in shifting as quickly as possible and getting the car turned rapidly, too. For the former, another gear would be helpful—the five ratios are a little too widely spaced to maximize acceleration, and a smaller gap between second and third would be really nice exiting the slower hairpins. For the latter, a faster rack ratio than this car’s 20.5:1 would also come in handy—we’re spinning the wheel like mad trying to get the car around each turn, but there’s a limit to how quickly we can move our hands.

It’s kind of hilarious, actually, an absurd challenge to extract maximum speed from severely limited resources. It’s also a blast, because it forces us to drive as well as we can, technically, in order to overcome the vehicle’s limitations. 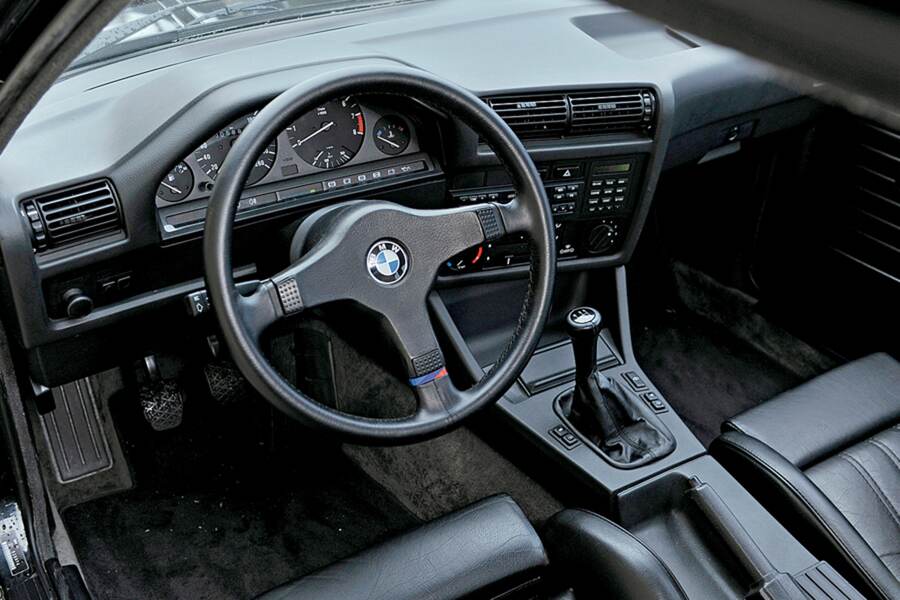 And let’s be clear: This is not a 2.0-liter M3. It has a 2.0-liter S14 four under its hood, but other than that it’s a relatively standard E30. Even though it has M-Technic suspension, this car is riding on 195/65-14 tires at all four corners, and it’s decidedly less “racy” than the genuinely race-derived E30 M3. It feels like, well, like a standard E30 with a torque-deficient S14 engine. It’s charming, and it’s a fun challenge to drive it quickly, but it’s less magical than it is simply odd.

According to the general consensus among enthusiasts, the E30 M3 is sheer automotive perfection, the ultimate driver’s car. On the other side of the Alps, on a twisty, two-lane road near the ski resort of Sölden, Austria, it’s hard to argue with that assessment. There’s a fluidity to the way the E30 M3 tackles the turns, a grace that marks every move that stands in sharp contrast to the brutality of big-power M cars like the current M5 and M6, not to mention the V8-powered E90/E92 M3. 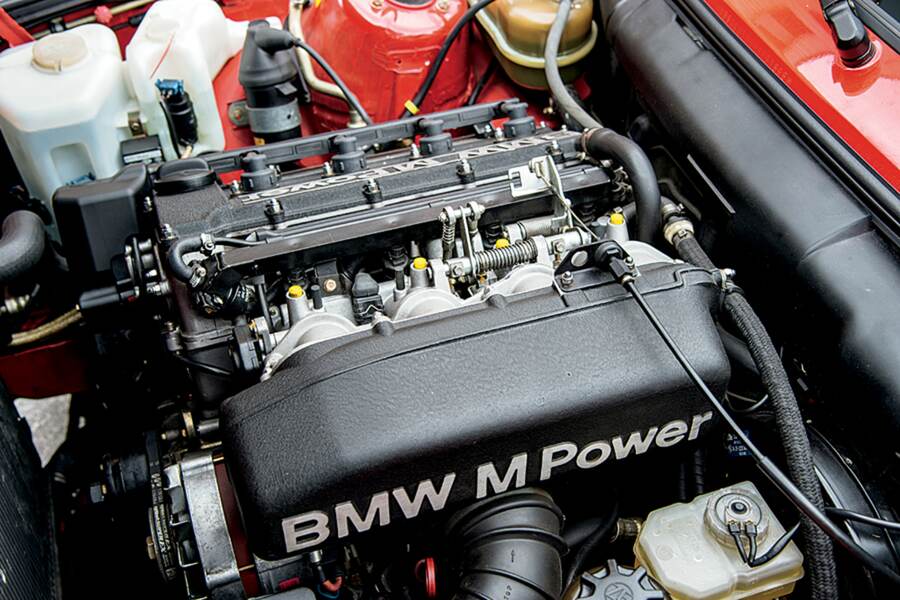 Much of it comes down to the car’s dimensions. By today’s standards, the E30 is a tiny car, one that could probably fit inside a current F82 M4 if the latter were hollow. Its body is a full 13 inches shorter, and even its wheelbase is nearly 10 inches shorter. It’s 4.1 inches narrower, even with the fender flares that add almost five inches onto the standard E30 sheet metal, but its tall greenhouse means that its roof sits merely half an inch lower than that of the newer car.

As for weight, the E30 M3 is at least 700 lbs. lighter than the M4, which is itself lighter than its predecessor thanks to the liberal application of carbon fiber. (Getting a handle on the E30 M3’s actual curb weight isn’t easy. Checking various sources, we found variances of as much as 300 lbs.; the tables that accompany this article use what we believe are official figures from 1989-’90.)

Sub-3,000 lb. cars are hard to find these days, especially in the BMW universe. When the lightest car now sold in the U.S. (the 228i) tips the scales at 3,295 lbs., any E30 seems like a featherweight by comparison—and it doesn’t need much power to feel fast. 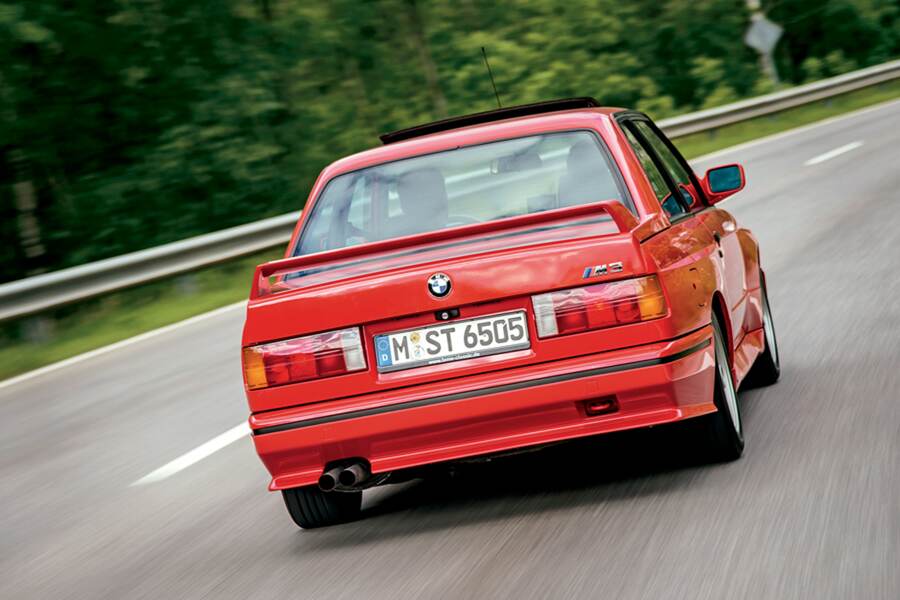 On paper, the M3’s Euro-spec 200 hp and 176 lb-ft sound like they’d be no match for the current 228i’s 240 hp and 255 lb-ft, and they aren’t if you’re only comparing zero to 60 times. The 228i is some 1.7 seconds faster to that benchmark off the line, but that doesn’t necessarily translate into a faster car overall. With its lighter weight and nearly identical contact patch, the E30 M3 can carry a lot more momentum through the corners than the newer car, and that’s where its magic lies.

This M3 may be road-legal, but it was built to meet the demands of European Touring Car racing, and it’s no ordinary E30. Beneath its flared fenders, it rolls on larger wheels on wider tracks, with more steering castor, stronger wheel bearings, anti-roll bars that attach to the struts up front and are thicker at the rear, shorter, stiffer springs and revalved shocks. The wider tracks and lower ride height make a huge difference, transforming the E30 from an upright sedan into a low-slung go-kart.

The car also got a slightly tighter steering rack than the ordinary E30s, with a ratio of 19.6:1 instead of 20.5:1. That rack ratio is also on the high side, and there’s still a lot of wheel-twirling to be done in the switchbacks that mark our ascent up this two-lane mountain road. But there’s no shortage of information through the steering wheel, and grip seems limitless. Drive it hard and the E30 M3 exhibits a poise that’s almost impossible to imagine if you’ve never driven one, especially if your frame of reference is limited to the newer cars. You’re not fighting physics here but rather using them to your advantage, and this short-wheelbase car exhibits effortless agility. 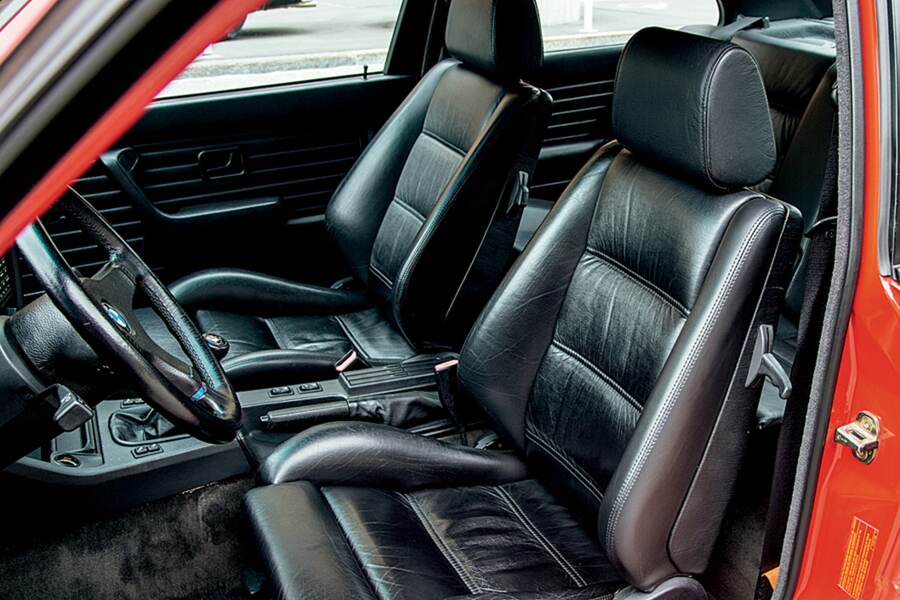 This E30 M3 makes plenty of power from the midrange on up, yet it doesn’t feel nearly as desperate for revs as its 2.0-liter counterpart. The additional 21 lb-ft helps to narrow the gaps between gears, and it’s a whole lot easier to keep the engine in its sweet spot, or to just let it rev when there’s no time to shift.

You can’t burn rubber with only 176 lb-ft, but you can attack a series of bends with enthusiasm, and the E30 M3 responds like a well-rehearsed dance partner. That interaction between car and driver is what makes this a great sports car, and you don’t need to be going outrageously fast in order to experience its essence. Thrills come not from top speed but from sensation, and the sensations are all about the beautiful physics of cornering and momentum.

Driving it back to back with the similar yet distinct 320is only serves to highlight how very right BMW Motorsport got it with this car. Its 2.3-liter engine has the perfect balance of horsepower and torque for the enthusiast driver who’s willing to let it run up top, but the engine is only part of the equation. The much-improved E30 chassis is equally important, and the M3’s perfect balance between power and handling in a lightweight package makes it an absolutely stupendous driver’s car. 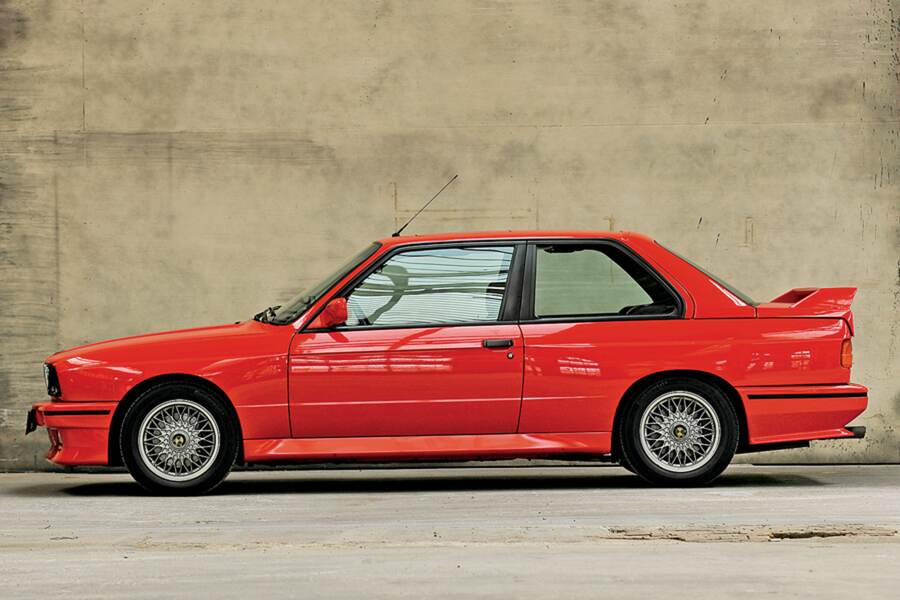 The E30 M3 we’re driving today is 100% stock, kept in perfect condition by BMW Classic. If it were for sale, it would probably fetch as much as a new M3 or M4, and I can’t say it would be a bad bargain. It’s not a daily driver—it’s a little too loud and too raw, and its S14 engine requires too much maintenance—but it might be the best real-world sports car BMW has built in the modern era.

As such, it’s a worthy heir to the pre-war 328, which shares its perfect balance of high-revving power and race-worthy handling. Those 328s, by the way, are selling for upwards of $1 million some 80 years after they were winning races on the Nürburgring, while the E30 M3 is trading for merely twice its as-new price three decades past its competitive prime.

If history is any indication, that won’t last for long. 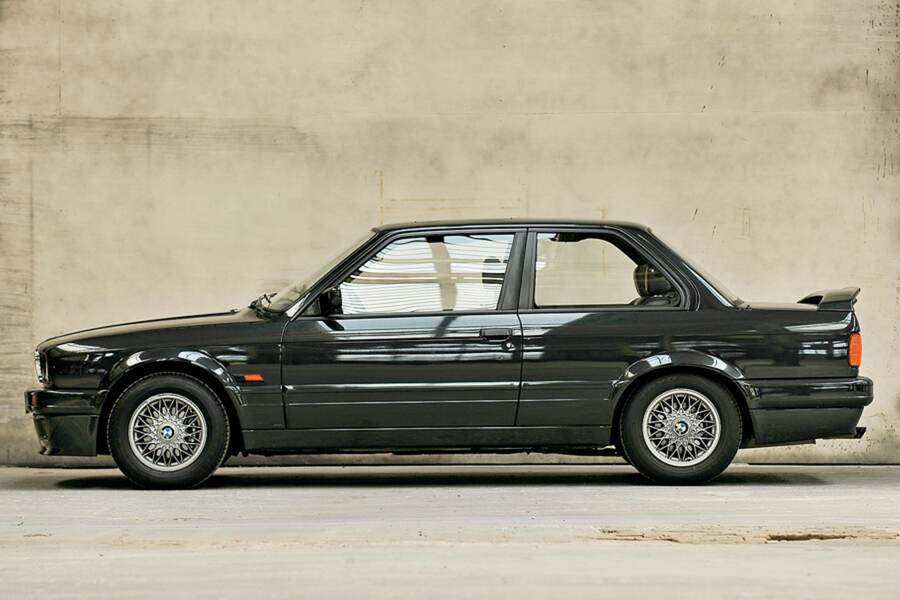 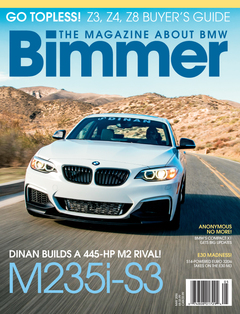