A lifetime of racing 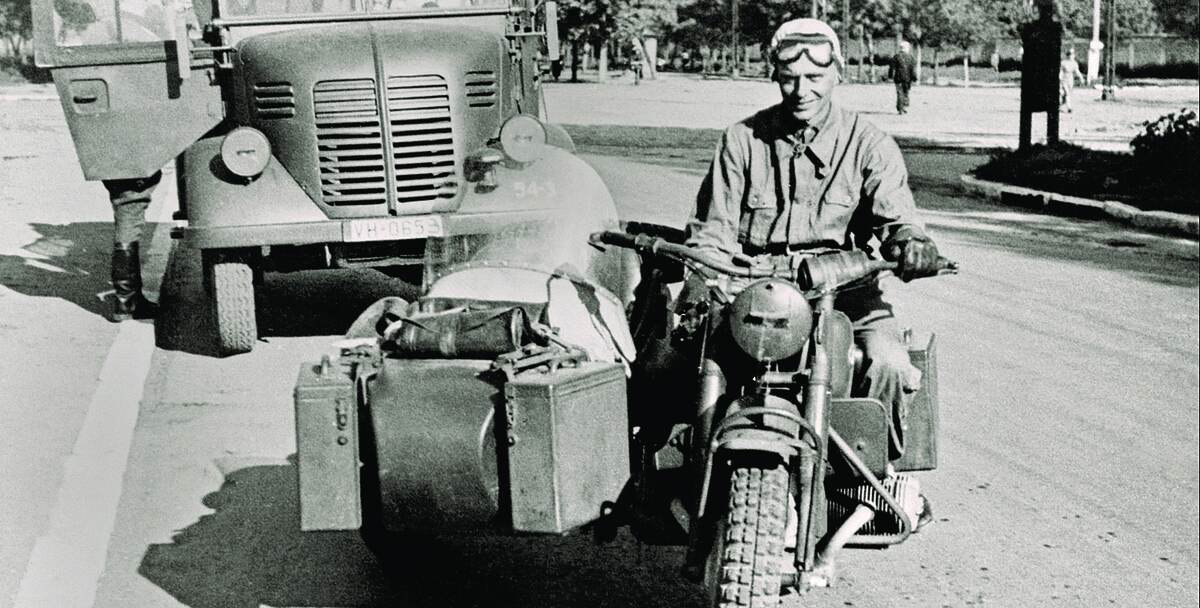 In the pantheon of influential figures throughout BMW’s first 100 years, Baron Alexander von Falkenhausen stands near the top. In 1934, he joined BMW’s factory motorcycle racing team as well as its engineering department, and he was working on the successor to the legendary 328 sports car when World War II intervened. When hostilities ended, he built his own race cars before rejoining the company in 1954 to improve the performance of the 507, among other projects.

Three years later, von Falkenhausen was BMW’s head of engine design, a position he held through 1975. As such, he designed the M10 four-cylinder that remained in production for an astonishing 26 years and the similarly long-lived M30 “big six.” Both engines were marked by smoothness and reliability, von Falkenhausen’s penchant for overengineering making them good for 300,000 miles—or even more—with proper maintenance.

Overengineering also makes it easy to improve an engine’s performance when you want to go racing, and von Falkenhausen’s engines formed the basis for successful race motors. As the M12, the humble M10 four even won a Formula One world championship in 1983. 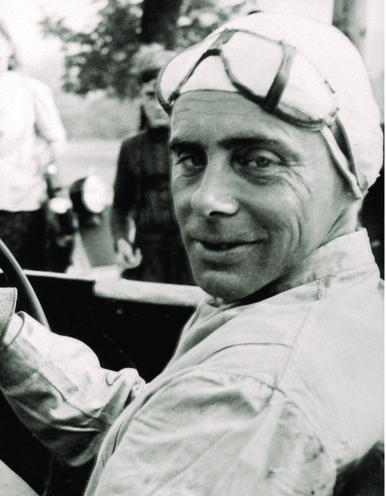 Von Falkenhausen was more than just an engineer, however. He was also a racer, and his competetive spirit infused BMW with an enthusiasm for motorsport. A scan of the BMW Archive’s photo collection makes that clear: Most of its photos of von Falkenhausen show the Baron astride a racing bike or behind the wheel of a racing or rally car. We’ve examined his life in detail already—see Karl Ludvigsen’s superb “The Engine Pope” in Bimmer #63, December 2006—but this time we want to focus on von Falkenhausen the racer, using photos from the archive to revisit his fast-paced life with BMW.

BORN IN MUNICH in 1907, von Falkenhausen was riding (and modifying) motorcycles by age 17. He earned a degree from the Technical University of Munich in 1930 and started racing shortly after graduation, perhaps before. At right, he’s shown on his British-built 500cc Calthorpe alongside his future brother-in-law, Count Heinrich von der Mühle-Eckart. Note the knobby tires on both bikes: Von Falkenhausen excelled on dirt, joining BMW’s factory team in January 1934 and winning gold medals with the BMW factory team in the 1934, ’35 and ’37 International Six Days Trial. By May 1934, he was also a BMW engineer, and he designed BMW’s first rear suspension, the “plunger-style” sliding pillars that were tested on BMW’s race bikes and used on production bikes from 1938 to 1956.

LIKE SO MANY MOTORCYCLE RACERS of the prewar era, von Falkenhausen soon went racing on four wheels as well as two, inspired, perhaps, by BMW’s introduction of the sporty 315/1 roadster in 1935. He got one of the factory 315/1s that had raced in the Alpine Rally, and by 1936 he was entering it in rallies and races. In the photo below, he’s running the “Three States Valuation Race” with his equally motor-sport-mad wife Kitty in the passenger seat. 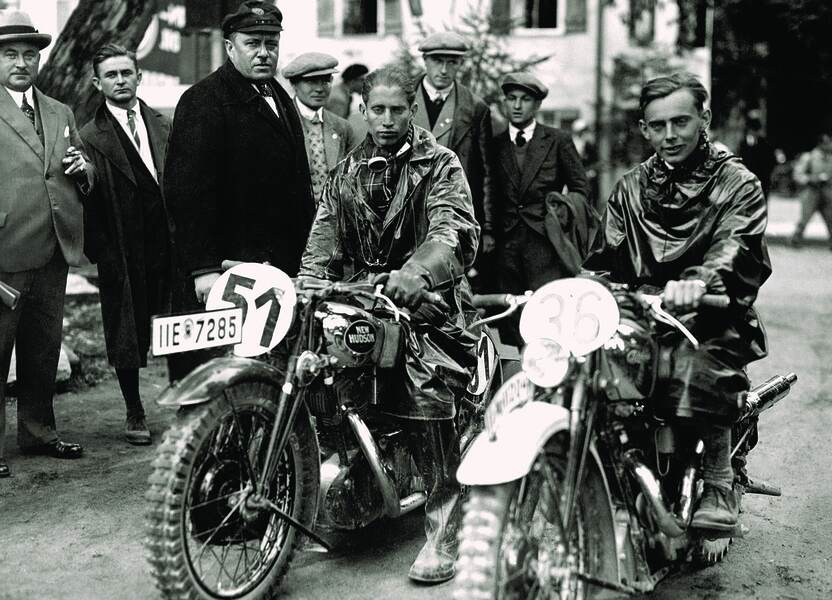 Race results from the prewar era are scant, but we know that von Falkenhausen won the 1935 Ruselberg race and finished second in the 1936 Munich Triangle Races. He and Kitty also finished third in the under-1,500cc class in the Autumn Trial Rally organized by the Munich chapter of the DDAC (German Automobile Club).

In 1939, von Falkenhausen traded up to a 328, which he described as “the real thing” for its race-ready handling and ample power. He drove it to victory in the under-2.0-liter class in the Paris-Nice rally and finished third in the Hamburg city park races..

WORLD WAR II interrupted von Falkenhausen’s racing career, as it did so many others in Europe. BMW shifted von Falkenhausen to airplane engines, then assigned him to develop the 750cc R 75 sidecar outfit for the German military. (Left) His testing duties included a journey to the Eastern Front in 1942 to evaluate its performance in the field; Ludvigsen reports that von Falkenhausen made it almost to Stalingrad before turning around, his engineer’s head full of ideas on how to protect the suspension and keep debris out of the air intake 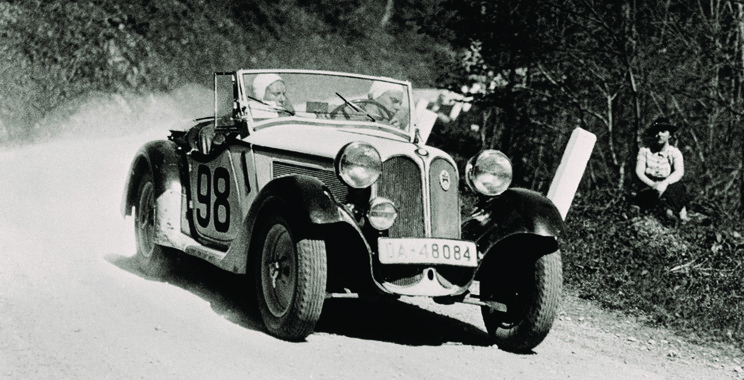 WHEN THE WAR WAS OVER, von Falkenhausen rode his test mule R 75 to his inlaws’ house near Regensburg, where he’d stashed his 328 in a barn, hidden beneath piles of farm equipment. Shortly thereafter, he entered it in Germany’s first postwar race, a hillclimb at Ruhestein, finishing second behind prewar GP star Hermann Lang. He also raced it to victory at Hockenheim in 1947 before turning his attention to a more interesting project: building his own AFM race cars using heavily modified 328 engines in a custom chassis that combined the front half of a 328 and the rear end of a 326, covered in a narrow F2-style body of Duralumin.

Von Falkenhausen raced his AFM 47 Intertyp to the 1,500cc sports car championships in 1947 and ’48, the year the photo below was taken, then built his first single-seater for 1949. He won with his AFM 49 F2 at the Norisring, but more importantly let Hans Stuck have a go in it. Stuck was so impressed that he ordered one of his own, making von Falkenhausen a constructor as well as a racer. How good was the AFM 49? Good enough to let Stuck beat the Ferraris of Alberto Ascari and Juan Manuel Fangio in the Italian GP at Monza in 1950.

DESPITE THE TECHNICAL EXCELLENCE of his cars, von Falkenhausen’s AFM operation was chronically underfunded. Let down by investors, he ran out of money and closed up shop in 1952. He continued racing and rallying his 328, DNF’ing the Munich-Riem race, racing to an unknown position at Avus and winning his class in the Austrian Alpine Rally before selling it to Joseph Hilton of Hoboken, New Jersey in late 1953 or 1954. (If anyone knows what became of Hilton’s 328, please let us know!) 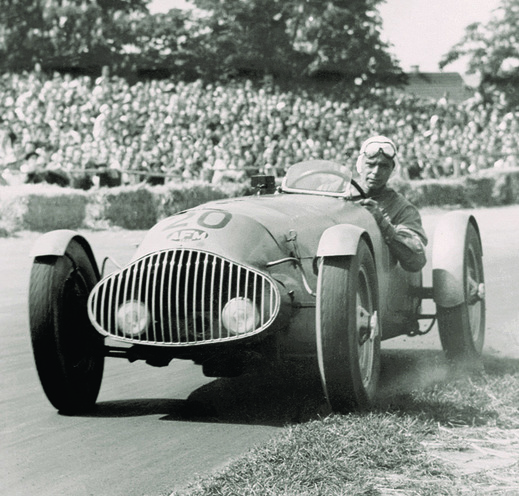 In October 1954, he returned to BMW, where one of his first tasks was to tune the forthcoming 507 roadster’s chassis for greater sporti-ness…and to make sure the car could reach its claimed top speed of 137 mph. Von Falkenhausen did the testing himself using 507 # 70003, first building an engine that put out 162 hp—the normal 150-hp output was insufficient—then improving the aerodynamics and using 3.4:1 final drive gearing to hit the required top speed on April 19, 1956, driving on a closed section of autobahn with TÜV certifier Herr Zweig—standing opposite von Falkenhausen in the photo above—in the passenger seat.

BMW DIDN’T BUILD any truly race-worthy cars in the early years of von Falkenhausen’s return, and in the absence of his faithful 328 he and Kitty went rallying instead, using whatever happened to be available. In the photo above, he’s driving a 502 sedan in the 1955 Austrian Alpine Rally with Kitty navigating; the von Falkenhausens finished second in their class. He also raced the 502 to a class win at the Wallberg hillclimb that year. 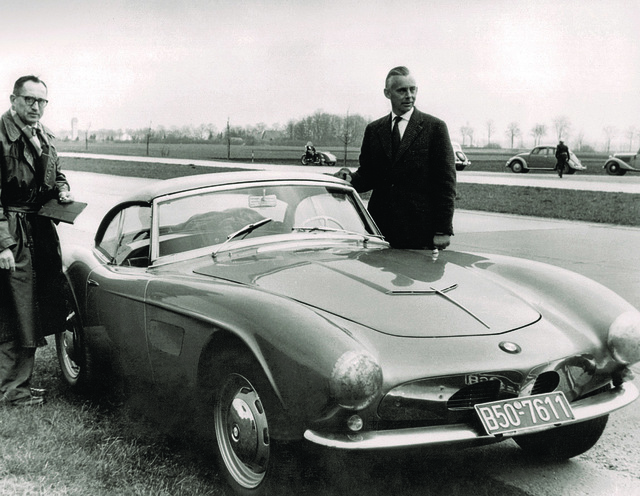 IN ADDITION TO THE BIG SEDANS, the von Falkenhausens also went rallying in BMW’s 600 microcar. In the photo above, they’re driving along a cliff face in the 1959 Tauernring Rally, in which they won a gold medal as well as the 750cc touring car class. In November that year, they’d race a 600 through adverse weather conditions to win another gold medal as well as their class in the Austrian Alpine Rally, with Alex scoring the best times in all special tests.

THE ARRIVAL OF BMW’S 700 COUPE gave von Falkenhausen a sportier car to rally and race. In the photo below, he’s drifting a 700 around a corner on the Crbo pass in Yugoslavia during a hillclimb race in 1960; he’d also drive in the Grand Canary rally that year, winning the sedan class. Von Falkenhausen also became the first driver ever to roadrace a 700 when he entered one in the Pferdsfeld Races in March 1960, and he’d race a 700 to second in class at the Norisring that September. He kept racing the 700 (and its RS derivative) through 1964, winning the Coupe de Salon in 1962 and the sport-prototype class at Neubiberg in 1964. Von Falkenhausen was 57 years old, but he wasn’t done yet!

HE’D BEEN IN CHARGE of BMW’s engine development since 1957, and he designed the M10 engine that was destined to become a mainstay of BMW’s production-car lineup. In typical von Falkenhausen fashion, the M10 was overengineered, which allowed it to serve reliably as the basis for BMW’s Formula 2 engines. The first of these used the innovative but complex cylinder head designed by Ludwig Apfelbeck atop a 2.0-liter M10 block. The engine was installed in a Brabham BT7 F2 chassis, and von Falkenhausen was the first to take it for a drive on BMW’s in-house test track. 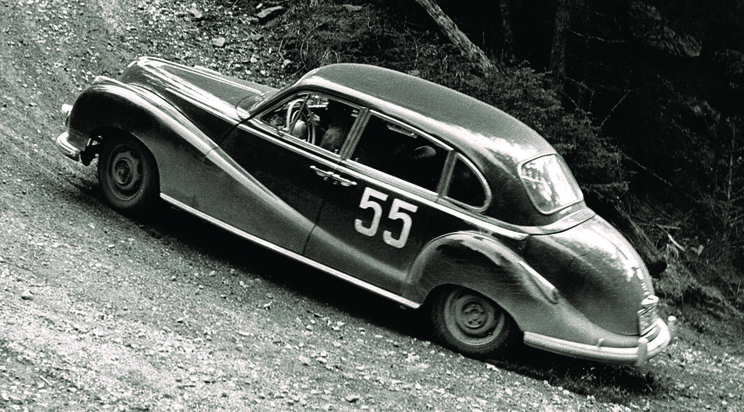 While the BMW board debated whether or not to go F2 racing, von Falkenhausen saw the world record potential latent in the Brabham-BMW. (Above) At Hockenheim on September 22, 1966, von Falkenhausen climbed into the cockpit just ahead of that big four-cylinder engine, its eight Solex carburetors metering a volatile mixture of methanol and nitromethane (!), then ran the quarter-mile in 11.26 seconds at 79.9 mph and the 500 meters in 13.5 seconds at 85.6 mph to capture two world records.

The records were short lived, and when he failed in his attempt to defend them against Carlo Abarth at Monza that December, he hung up his helmet for good. He was 59 years old, and he’d stay on as head of BMW’s engine department for another nine years before retiring in 1975 as BMW’s oldest employee.

EVEN IN HIS RETIREMENT, von Falkenhausen remained an enthusiastic supporter of BMW’s racing activities, turning up in his familiar Motorsport jacket to cheer on the F2 and sports car teams led by Paul Rosche, his successor as head of the racing engine department, as well as his son-in-law, BMW factory driver Dieter Quester. He took long drives around Europe with Kitty, went boating in the Adriatic and skied enthusiastically, as well. 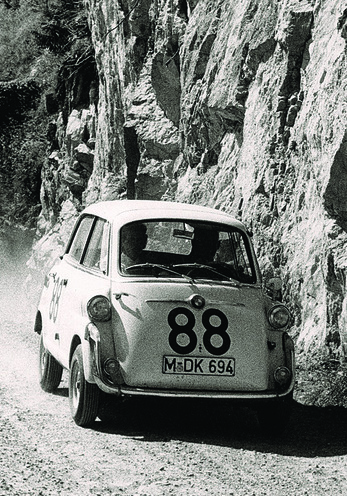 After 82 action-packed years, Baron Alexander von Falkenhausen died on May 25, 1989, leaving a legacy of durable engineering and enthusiastic motoring that persists at BMW to this day. 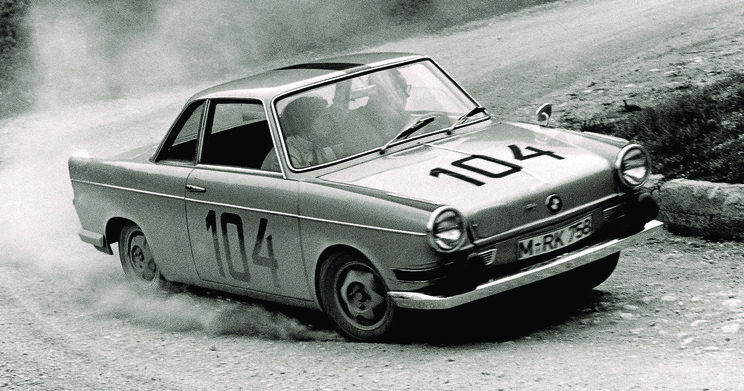 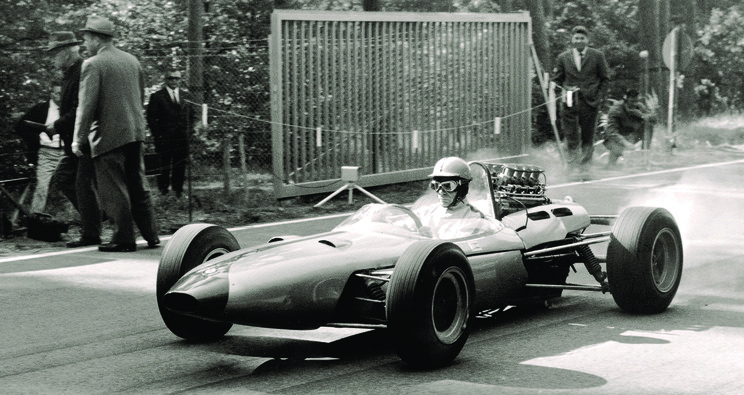 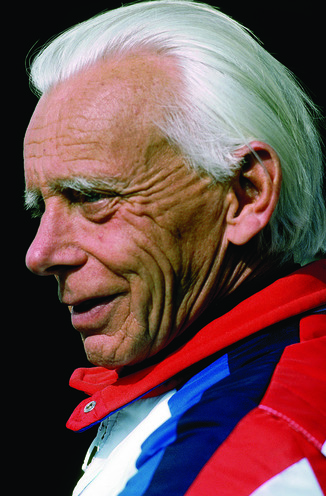 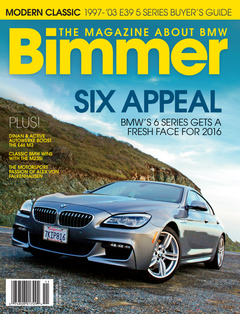