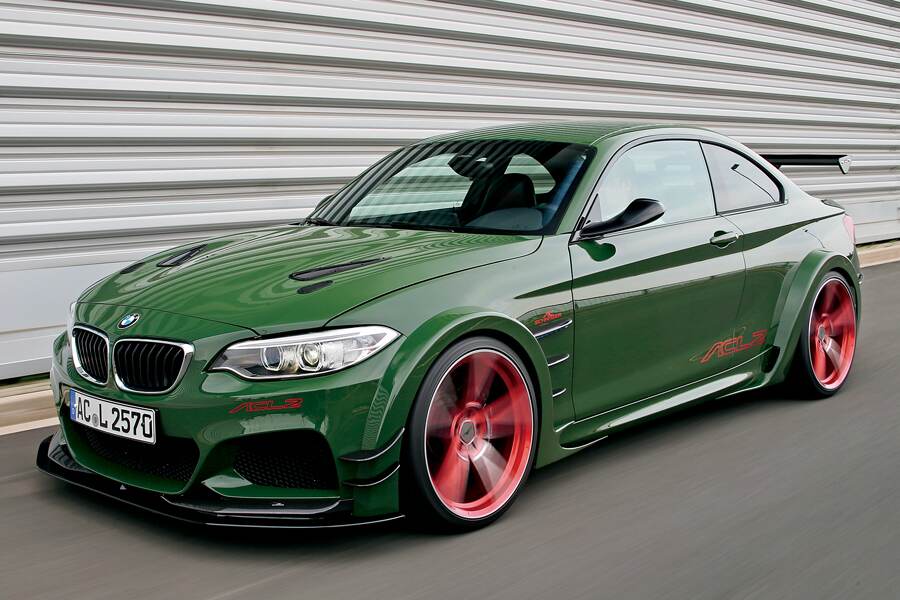 When AC Schnitzer unveiled the E36 M3-based ACS3 CLS at the 1993 Frankfurt motor show, enthusiasts went wild for this 320-hp hot rod with carbon fiber bodywork that shaved 282 lbs. from the M3’s curb weight. Version 2 was even better, with 350 hp and a whopping 297-lb. weight reduction that allowed it to lap the Nürburging Nordschleife in under 7 minutes and 42 seconds. AC Schnitzer built just 16 copies of the CLS and two of the CLS 2, and that was it for the cars that had generated so much positive notice.

Until now, that is: At the Geneva show in March 2016, AC Schnitzer revived the CLS concept with a new ACL 2, this one based not on the M3 or M4 but on the M235i whose dimensions and output so closely resemble those of the E36 M3 from two decades earlier.

Technically, things have moved on considerably in the intervening years. While the smooth, free-revving straight-six engine remains dear to BMW, the need to meet increasingly tight emissions and fuel economy standards has resulted in the adoption of turbocharging across the board. At the same time, the need to contain costs has led to the use of modular construction and widespread component sharing.

The similarity of the basic N55 and S55 motors used in the M235i and M3/M4, respectively, meant that swapping one for the other would be relatively straightforward. AC Schnitzer also undertook the more challenging task of fitting M4 front and rear axles, widening the car by 70mm on each side. BMW did roughly the same in making the M2, but the baby M car was still months away from the showrooms when the ACL2 project was under development. 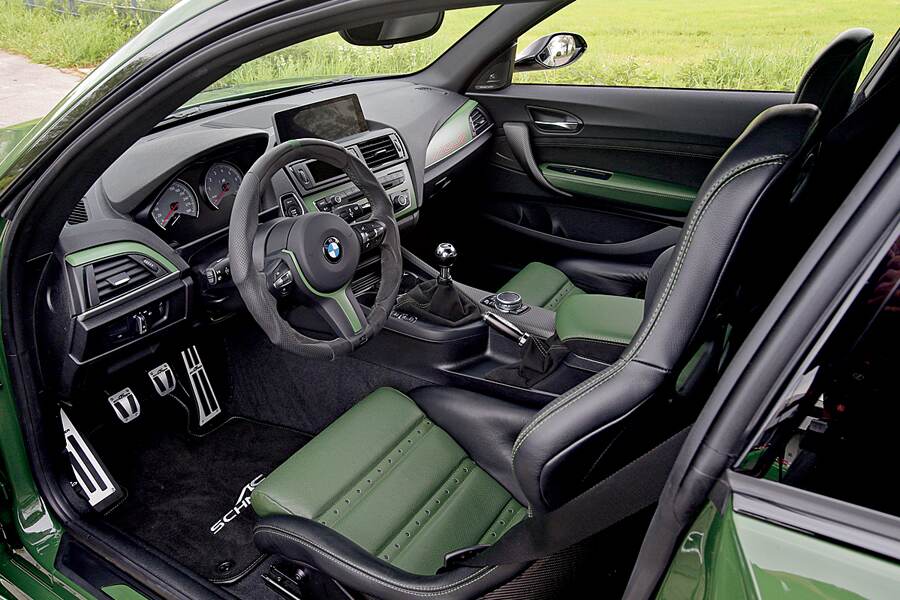 Inner and outer metalwork revisions were required to make everything fit, along with hand-fabricated new fenders. The bespoke carbon fiber bodywork consists of a new hood with air vents, door mirrors, front spoiler splitter and side dive planes, fender extensions, rear diffuser and the big rear wing with Gurney flap. The front and rear bumpers and side skirts are made from OE-grade PU-RIM polyurethane.

Alloy struts position the carbon fiber rear wing up in the airstream 250mm clear of the trunk lid, where it’s both aerodynamically effective and doesn’t impede rear view too badly. In the wind tunnel, the factory M235i has an aerodynamic lift of 15 kg over its front axle and 32 kg over its rear axle at 125 mph. The ACL2’s aerodynamic aids more than counter this, producing 15 kg and 38 kg of positive downforce over the front and rear axles, respectively.

As with all AC Schnitzer show cars, the cabin of the ACL2 is designed to complement its distinctive bodywork. It’s lightweight luxury, dominated by a pair of figure-hugging and exquisitely trimmed bucket seats. Although the low weight theme requires the removal of all superfluous equipment, including the rear seat, the black and green Nappa leather/Alcantara interior is second to none. The trademark AC Schnitzer Blackline aluminum gear-lever/knob and handbrake lever are present, as are the alloy pedal set and embroidered floor mats. 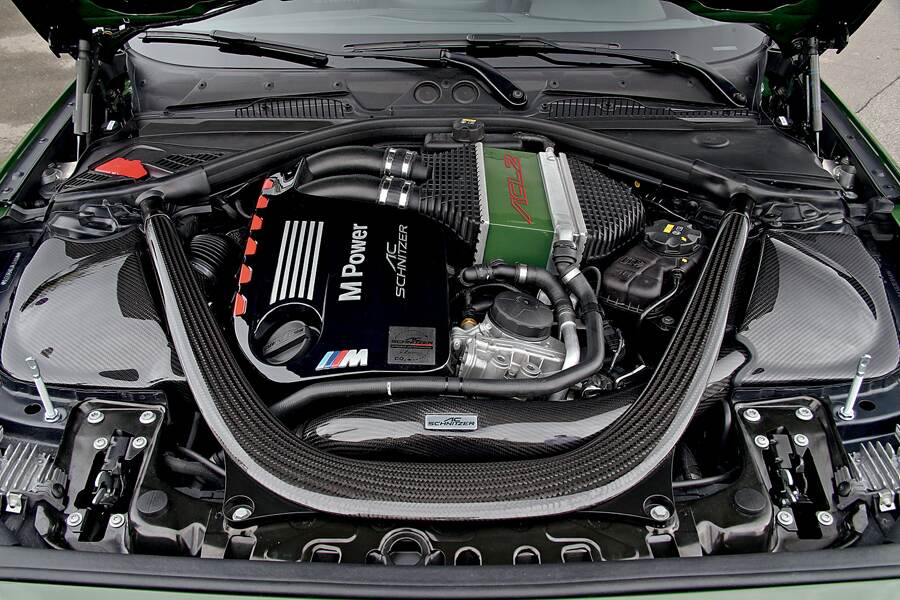 Straight out of the box, the TwinPower Turbo S55 engine in the M3/M4 makes a healthy 431 hp and 406 lb-ft of torque in Euro-spec. The AC Schnitzer tuning program takes this to a robust 570 hp and 476 lb-ft. That’s an additional 60 hp and 70 lb-ft over AC Schnitzer’s Stage 1 ECU-only upgrade, and it comes via a larger volume carbon fiber intake and a custom exhaust system built in-house, with ECU remapping to suit.

“While it would have been nice to push the headline horsepower number all the way out to 600 hp, this would have entailed changing or significantly modifying the turbochargers, which are right on the limit at 570 hp,” explained AC Schnitzer development chief Roman Fenners. 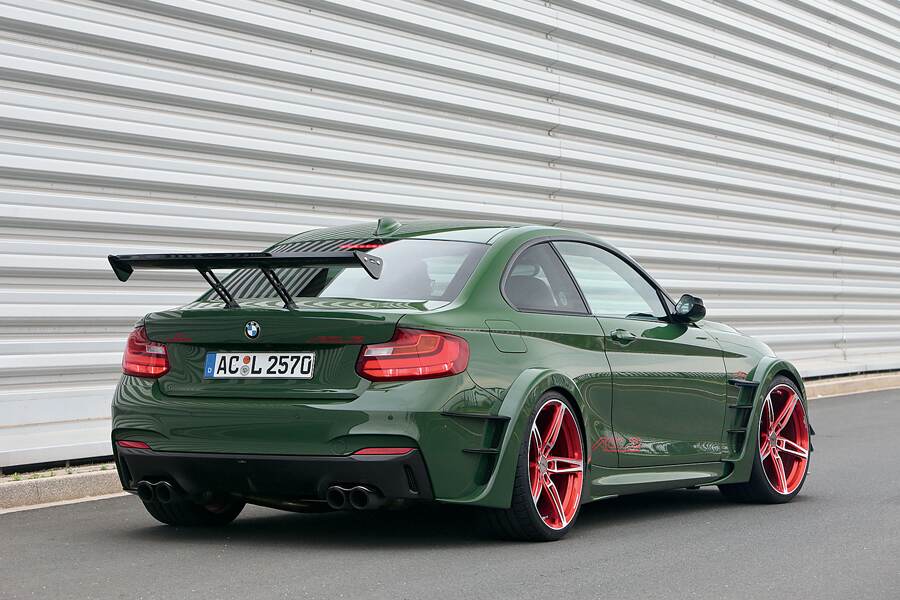 To bring chassis performance into line with that of the engine, a mechanical Drexler limited-slip differential with 25 to 95% locking capability sits in the M4 rear axle casing. While the excellent M Differential was available, the M235i’s wiring loom and ECU are different from those in the M3/M4, and the software additions and revisions to make this widened 2 Series with its unique kinematics work properly with the electronically-controlled, hydraulically-actuated M Differential would have presented a calibration nightmare.

Sitting behind these big wheels is the largest set of brakes ever fitted to a BMW 2 Series, giving this relatively light car awesome stopping power. The vented, cross-drilled carbon-ceramic brake discs measure 400 × 38mm in front and 380 × 28mm at the rear, clamped by six-pot and four-pot calipers, respectively. 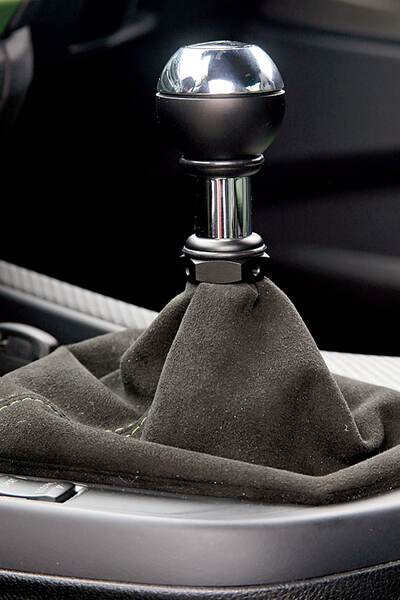 From show stand to autobahn

Having driven the E36-based CLS and CLS2 in their heydays, I was chomping at the bit to get behind the wheel of the ACL2.

Seeing the ACL2 in the wild with other cars around it is quite a different experience from seeing it on a show stand, and the raised eyebrows from passersby show obvious surprise. The reaction from other drivers on the autobahn was even better, with lots of thumbs up signs from car drivers and motorcyclists alike. In one priceless example, a passenger in a Golf GTI rolled down a window, held up his iPhone and signalled that he wanted me to drop a gear and accelerate away on full noise for a video. I duly obliged—twice!

Given room to stretch its legs, the ACL2 is fast, very fast. It accelerates with real muscle through its six forward gears, each shift facilitated by that increasingly rare left-hand pedal. Not as heavy as I would have expected for a beefy unit that can absorb nearly 480 lb-ft of torque, the clutch is progressive in its release action and not at all the pain you would expect in town traffic. 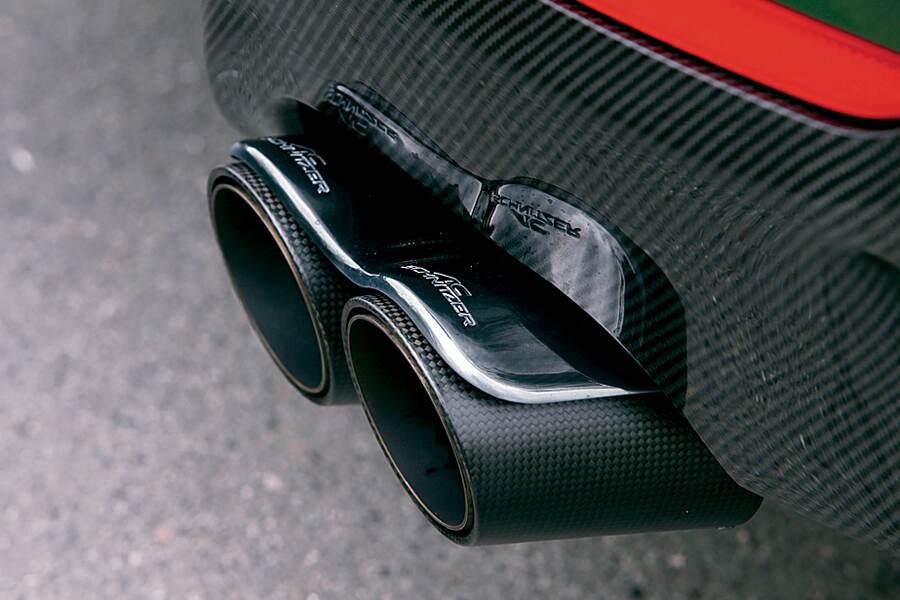 On the open road, the action of the short shift kit comes into its own, and a dab on the clutch and a slick hand movement to guide the stubby gear lever across the gate resumes full boost action as the big rear tires squirm under the onslaught of big torque.

On a dry road, helped by the limited-slip differential and well tied-down suspension, the fat rear tires effortlessly absorb the twisting forces being dispensed through the drivetrain as the bespoilered green machine vaults towards the horizon.

Where an M4 growls in a sporty but rather restrained way, the exhaust on the ACL2 is gifted with a deeper basso profundo singing voice. It also screams a head-turning straight-six howl once the tach needle passes the 5,000-rpm mark. The occupants of that Golf GTI must have been pleased. 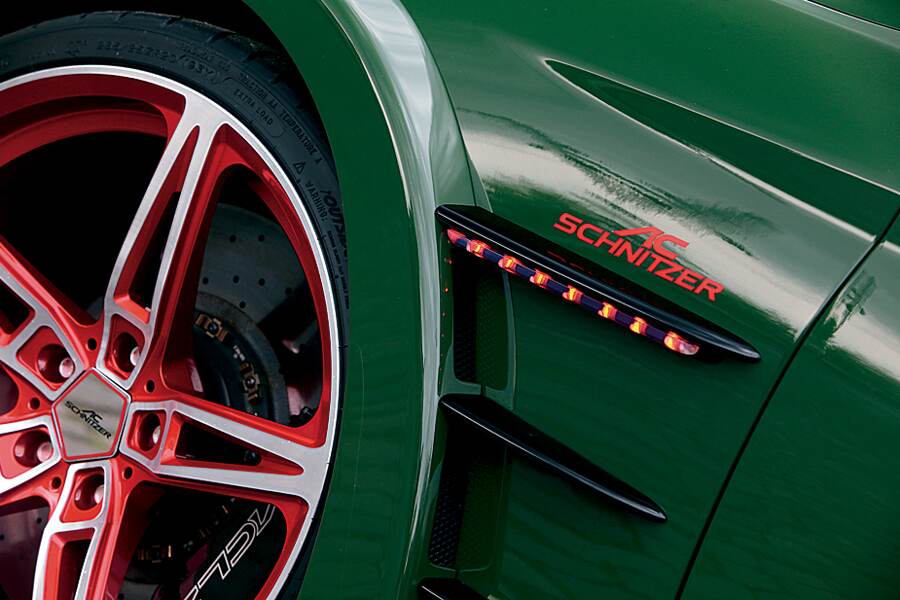 On public roads, the big tires at each corner provide so much mechanical grip that provoking slides at sane speeds is simply not an option. The front end performs as advertised on turn-in, and the lack of understeer means you can treat this car like a big go-kart without having to back it in with throttle lift to counter the normal turn-in understeer into a slow or slow-to-medium bend. Meanwhile, the electric power steering compensates for the wide rubber, so that the steering effort is medium-weighted with good feel.

Ride quality? Stiff! What did you expect with a relatively light car with such big wheels and tires? But the ACL2 was never meant to be a daily driver, and if you take it to a racetrack, its Hockenheim settings will come into their own. Of course, the fully adjustable suspension means you can back off the compression and rebound to keep your osteopath bills down.

The AC Schnitzer ACL2 is a labor-intensive, hand-made one-off that was internally invoiced in the region of €149,000. In the short term, its role is to make cameo appearances on the show circuit. Like the original CLS and CLS2, it will eventually end up in the company’s show car collection.

While this prototype is not for sale, AC Schnitzer might be persuaded to make a few copies based on the BMW M2, whose wider body and M4-based drivetrain mean that much of the technical heavy lifting has already been carried out. Once again, it is down to how much some die-hard enthusiasts really want a copy of this car, and how deep their pockets are! 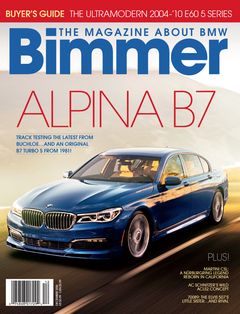