What would you do if you had a freshly restored 328 roadster in the garage? If you were Dirk de Groen, you’d hit the road, driving like it’s 1937. 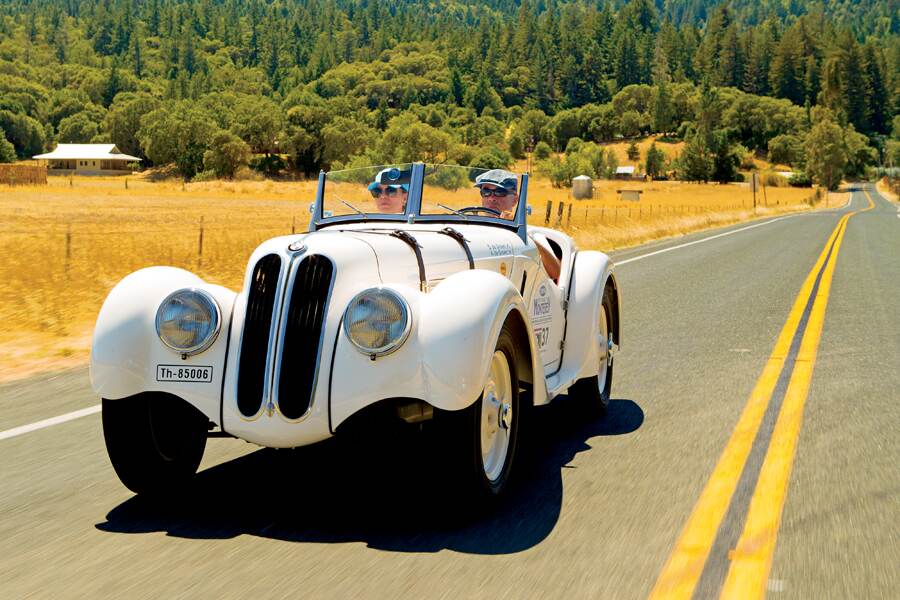 Up ahead, it looks like a white phantom, a spectral presence winding its way through the redwoods and into the mist of the California coast. You try to get closer, half-expecting to catch a glimpse of Ernst Henne’s leather-helmeted ghost behind the wheel. Out here along the Navarro River Road, a 328 roadster is a peculiar sight, the sound of its straight-six engine echoing another time, another place.

For this car’s owner, that’s precisely the point.

“I love the past,” Dirk de Groen says. “I love things that don’t exist any more. Other people want to go into the future—my daughter wants to be an astronaut, to go to the moon—I couldn’t care less. Put me in a time machine, take me back to 1960, the year I was born. I want to see what the world was like when I was a little boy.”

De Groen’s boyhood in the Netherlands was already BMW-centric. His father bought a Neue Klasse 2000 sedan in the late 1960s, and his grandfather had a Neue Klasse 1800. When Dirk got his license, the first thing he did was get a BMW of his own: the 1602 that had captured his imagination from a Dutch dealer’s lot. It was a well-used 1970 model with 250,000 km on the odometer, but Dirk was obsessed. He bought it with a little help from his father, but mostly with money he’d earned himself, working after school at a gas station, McDonald’s and a BMW dealership. A year later, he traded the 1602 to the same dealer for a 2002 tii Touring, which he kept until leaving the Netherlands for graduate school in the U.S. in 1982.

A career in banking followed, but de Groen didn’t get another BMW until 1998, when he and his wife, Alexandra, returned to Florida after a ten-year stint in Haiti. And when he did, it was a modern one: an E39 5 Series, followed by an E60, an X3 and a 135i. It wasn’t until about ten years ago that he started to think seriously about old BMWs again.

He bought a 1973 2002 tii and restored it to be a daily driver. That didn’t quite work out—its vintage air conditioning was no match for the south Florida heat—but it set de Groen on a path that hasn’t yet reached its end. He’d returned to the Neue Klasse BMWs of his youth and adolescence, but de Groen found himself wanting to go back still further. He started looking at the prewar roadsters, specifically the 328 that had dominated the sports car classes in the late 1930s. He wanted to go back not merely to his own childhood but that of his father, or even his grandfather. 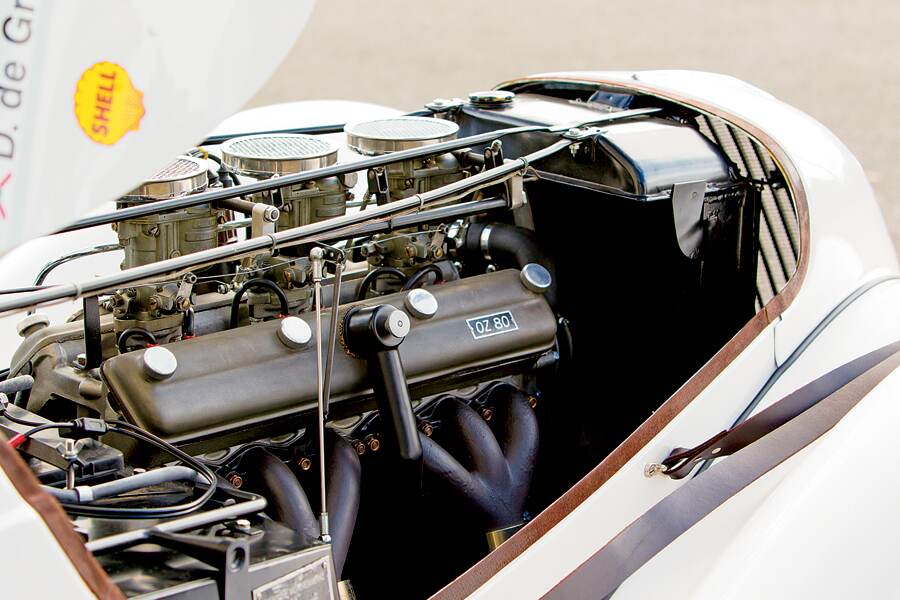 “I’m looking for that driving experience,” he says. “How those people before the war felt when they were driving in these rudimentary vehicles, these cars that have no bumpers, that are noisy.”

328 #85006, as we reported in Bimmer #133, left the Eisenach factory on April 29, 1937. From there, the car traveled a mere 130 km east to the Hugo Koch dealership in Pössneck, Thuringia, where it was sold to a customer whose name remains unknown. As its serial number indicates, this car was the sixth 328 built, the third series-production example to follow the three prototypes built in 1936. Those prototypes created considerable excitement among customers looking for a sports car that could win races, and most of the early production cars like #85006 would have been raced by enthusiastic owners.

There’s no proof that #85006 raced, unfortunately, nor do we know what happened to it during World War II or immediately thereafter. Following Germany’s defeat on April 29, 1945, the state of Thuringia was under U.S. control. By July, however, Eisenhower’s army had retreated to the western bank of the Elbe River, ceding occupation of Germany’s eastern region—including Thuringia—to the Soviets as per the Yalta agreement. It’s possible, even likely, that #85006 went west with the U.S. Army; if it hadn’t, it probably wouldn’t have ended up in Colorado by the mid-’50s. 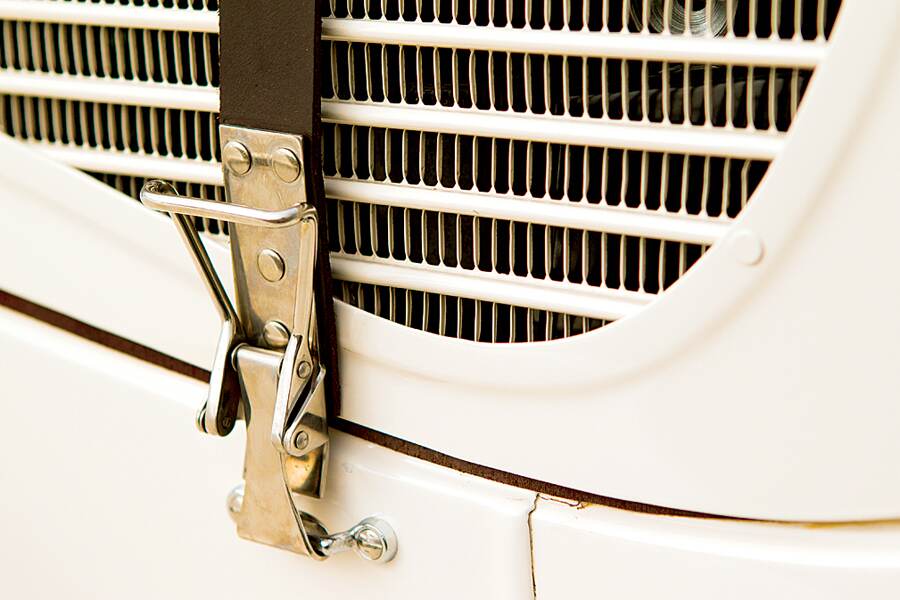 But end up here it did, and in 1955 a 22-year-old Tom Goodyear spotted it in the back of Denver garage with its engine and transmission removed. The car had a 1953 Texas license plate and a Colorado title, through which Goodyear tracked down the car’s owner, William R. Deshler. He bought it for $300, the amount Deshler owed the garage.

Goodyear got the car running with help from BMW enthusiast Bob Sonsten; later, Ernie Weil would provide invaluable help in keeping it on the road. Goodyear kept #85006 until October 2, 2009, when he sold it to well-known BMW collector and fellow Coloradan Bill Young. Young never drove the car, but he certainly enjoyed looking at it, and it was an important piece of a significant BMW collection.

Not long after Young bought #85006, de Groen started looking for a 328 himself, consulting with fellow BMW Vintage & Classic club members here and in Europe. Naturally, he talked with Bill Young, a fellow club member and also a friend.

From Bill Young, getting more

than just a car 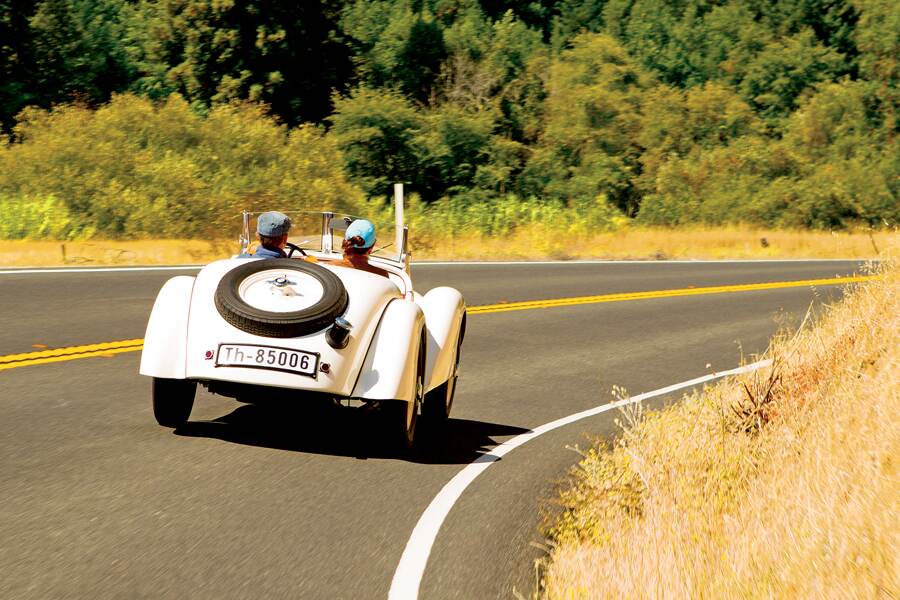 Young had a car, but more than that he had one whose provenance was well established thanks to its long tenure with a well-known owner. Even if its early history can’t be verified, #85006’s authenticity is beyond reproach, which isn’t true of every 328.

Young and de Groen went back and forth on price, but just when it seemed they might be coming to an agreement, de Groen says, “The negotiations went south, deep south.

“I told him I was also looking for a 507 and said, ‘Why don’t you sell me both cars?’ He practically hung up the phone. I guess I hit a nerve, because Bill’s 507, that individual car, was his 507, the car he’d seen as a college student in Mississippi. I told Alexandra, ‘I think I blew it.’”

Eventually, Young’s annoyance subsided, and when de Groen told him that he and Alexandra would be skiing in Colorado that winter, Young told them to come on by. That didn’t happen after de Groen broke his hip on the slopes, but the discussions resumed over the phone, and later in 2012 they made a deal. Almost immediately thereafter, Young went into the hospital, and a few days later he died.

De Groen believes that Young wanted the car to go to someone who’d really appreciate it, and he regrets that he hasn’t been able to show Bill the finished product, maybe take him for a run up Pikes Peak in it. 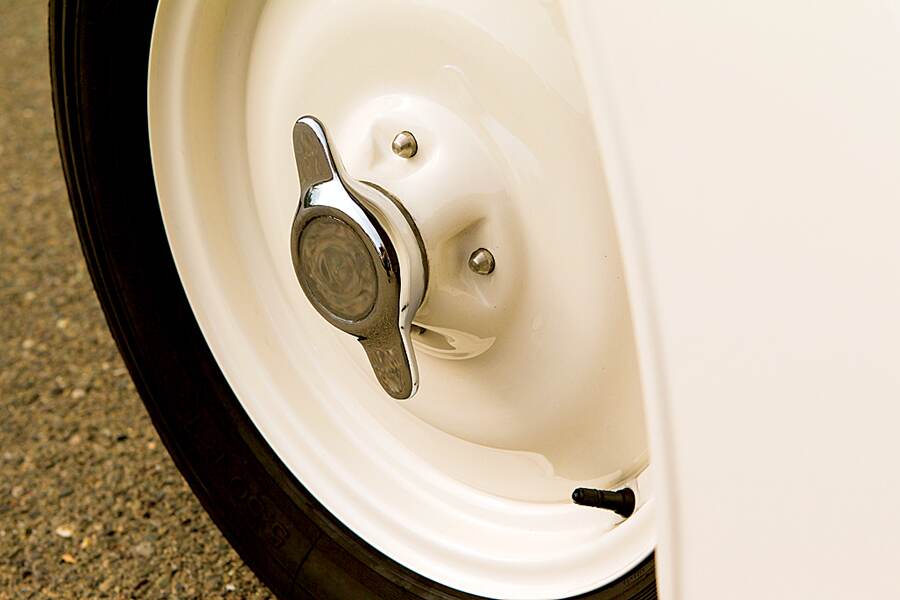 That’s because Young did more, de Groen says, than just sell him a car. “He really taught me the spirit of the club. He would have people come from all over the country, from all over the world, and Bill would say, ‘Here’s the key to the warehouse. Take out whatever you want.’ He was a guy who shared with a lot of people.”

Channeling Young’s spirit, de Groen offers me the 328. I’m honored—I’ve driven 328s before, and I know how much fun it would be on a road like CA 128—but I’m quietly relieved when I can’t reach the pedals from the fixed-position driver’s seat, which Dirk has set farther back than usual in the tiny cockpit.

I’m content to ride shotgun, swapping places with Alexandra and letting her escape the coastal fog for the warm cabin of our press-fleet i8. It may be chilly, but the open-air ride in the 328 takes me back in time, all the way to 1937.

When we first met Dirk and Alexandra in the spring of 2015, they were showing the 328 in Florida. Fresh from a 100-point restoration, it was making an appearance at the Amelia Island Concours before it could collect the inevitable battle scars from the road. De Groen wasn’t worried about keeping it perfect, he said: He wanted to drive it, take it on BMW Vintage & Classic Club rallies like the one from Mendocino to Monterey for BMW’s centennial celebration. Dirk and Alexandra will be joining that group tomorrow; today is for getting to Mendocino via the back roads from Sonoma, where they had the car delivered to Jim Smith’s ranch.

By the time they ship it home, the de Groen’s will have covered 750 miles in #85006. That’s a lot in an 80-year-old roadster, but de Groen had been game for quite a bit more. When we first talked, he wanted to drive the 328 all the way from Florida, taking back roads across the country to reach Monterey. Only time constraints and difficult logistics prevented it, and I could sense that Dirk was a little disappointed to be denied the adventure. Alexandra was probably relieved—she’s a good sport, and she enjoys the journey, but this is his thing, really, not hers. 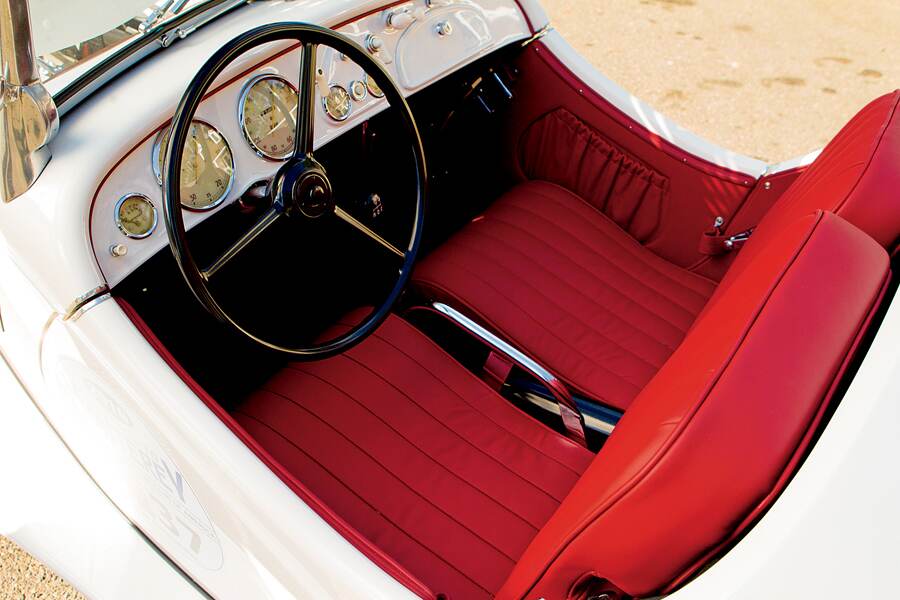 “The road is beautiful, I enjoy the scenery and the trees,” she says, “but I don’t relate to cars the way he does. I’m daydreaming.”

Dirk, on the other hand, is busy. There’s a lot to do driving an old car with no power steering, no power brakes, no driver aids…and a myriad of strange noises that might or might not portend disaster.

“He’s very sensitive to every little change, whether noise, appearance or whatever,” Alexandra says, “He’s always asking me, ‘Did you hear that? Did you smell that?’”

Even when they’ve been fully restored, old cars still have their foibles, from insignificant noises to potentially perilous water leaks like the one this car suffered shortly after de Groen got it back from restorer Andreas Freudenberger in Eggenfelden, Bavaria. Leaky cylinder blocks are common on 328 engines, apparently, but it still caused de Groen a few sleepless nights until Freudenberger could fly to Florida to fix it.

“It only took one morning,” de Groen says. “Andreas already had the plate made from a cardboard template I sent him. You drop the exhaust manifold and drain the water, but when you start drilling into the block…” 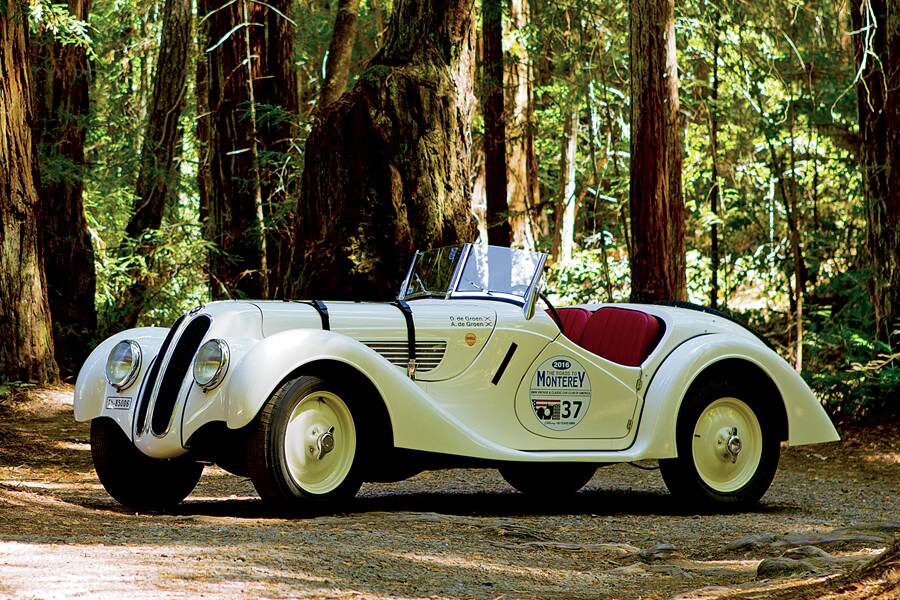 De Groen shudders a bit at the thought, but the fix worked, the plate secured with 30 or 40 screws and half a tube of RTV sealant. The engine didn’t even hiccup on our drive from Sonoma to Mendocino, nor on the 600 miles the de Groens carried on afterward. The transmission, on the other hand, proves a bit recalcitrant in heavy traffic. Sourced from the lower-powered 319, this original ZF unit wasn’t up to the task even when 328s were new. It’s grinding a bit going into first and second, making a strong case for its replacement with a sturdier Volvo transmission but doing little to diminish the fun, de Groen confirms later.

“Driving the 328 in California was an absolute blast,” he says. “It was fun to show the car at The Quail and at the O’Fest concours, but the drives to Mendocino and Monterey and along Nacimiento-Ferguson Road and the Cabrillo Highway were certainly our highlights of the week, if not the year!”

From Monterey, the de Groens went straight to Germany for the 507 Meet and a few other events, and #85006 hasn’t been driven much since. Even so, this 328 won’t be parked for long.

“We definitely plan to do many more road trips with the car,” Dirk says. “I have been sorta-politely declining invitations to take it to other concours…not because we don’t like to show the car and share our enthusiasm but more that we want to focus on driving events. I have been discussing with BMW Classic in Munich the possibility of entering the 328 in the Mille Miglia, and I am very hopeful that this will happen.”

With its unassailable provenance, #85006 would seem a shoo-in for that prestigious event, though it will have to run with its original gearbox per FIVA rules. De Groen wanted the full vintage car experience, after all, and that ZF unit did carry Ernst Henne to a win at the Nürburgring back in 1936. 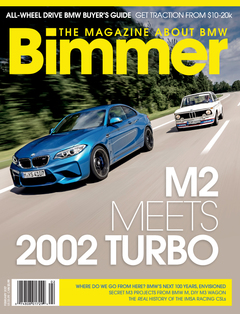