From its tastefully evolved design to its ideal balance of comfort and dynamism, the new G30 5 Series is a classic midsize BMW for the 21st century. 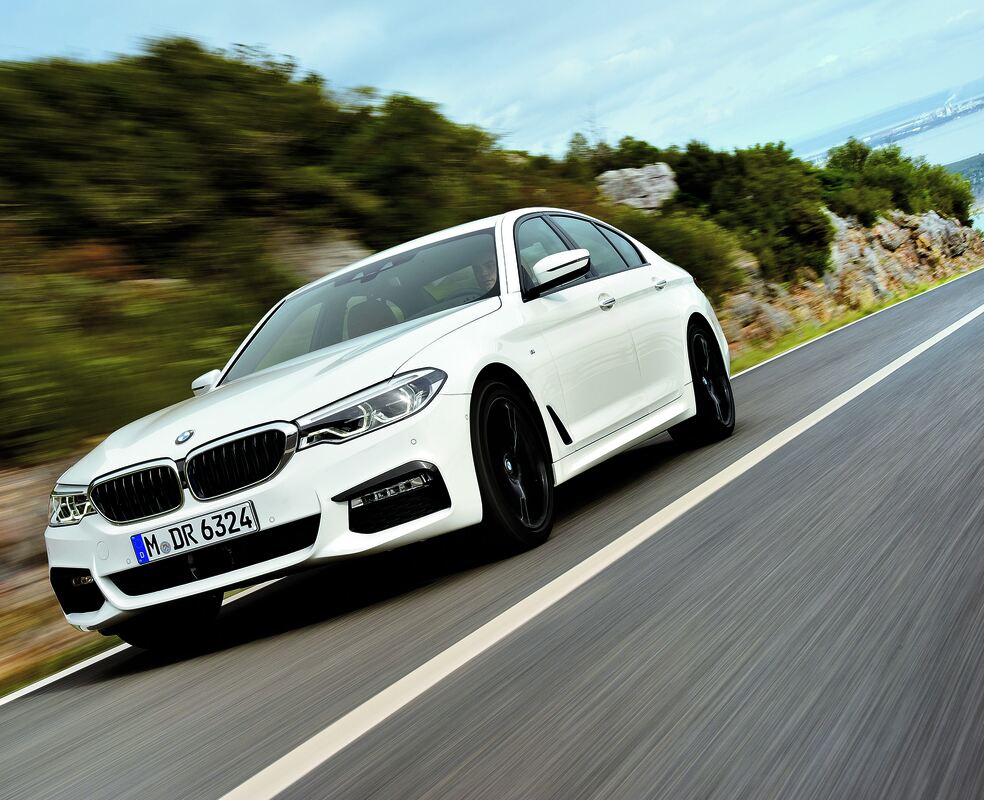 IF THERE’S A SIGNAL MOMENT in our test of the new G30 5 Series, it takes place not when we’re driving the new 530d xDrive or even the new 540i sDrive sedan. It happens when we turn to BMW Classic’s fleet of vintage 5ers and slide behind the wheel of a 1994 E34 540i. More than 20 years of engineering and design development separate this car from the new G30, yet they share an uncanny sensibility that unites them as essential 5ers.

You feel it right away. These cars go, stop and handle like sports cars when asked, but they also display solidity and maturity. These are cars for adults, for drivers who’ve outgrown the aspirational 3 Series but who’d feel mildly ridiculous in a Master of the Universe 7. Set squarely between those two poles, they occupy a middle ground where practicality trumps pretense, and where quality outweighs ostentation. That may sound boring to some, but to 5 Series sedan buyers, it’s Just Right.

Regardless of its size or configuration, the formula for a great BMW always starts with the traditional virtues: a strong, smooth-running engine and a responsive, well-handling chassis.

As a 540i, the new 5 series is powered by the modular B58 3.0-liter six that made its first appearance last year in the 340i. The 540i is a little heavier than its 3 Series counterpart, tipping the scales at 3,847 lbs. rather than 3,366, but the twin-scroll turbocharged B58 is more than a match for those extra 481 lbs. The 540i only needs an extra 0.1 second to hit 60 mph from a dead stop, taking just 4.9 seconds to reach that milestone. It isn’t supercar-quick, of course, but it’s plenty fast for real-world driving. It’s also responsive, a byproduct of its just-right balance between horsepower and torque. Engines that produce ever so slightly more hp than torque seem to be the sweetest, and the B58’s combination of 335 hp (from 5,500 to 6,500 rpm) and 332 lb-ft (from 1,380 to 5,200 rpm) yields an ideal balance of revvability and pulling power.

It doesn’t look dramatically different to its predecessor, but the new 5 Series penned by Page Beerman has lower, sleeker proportions that match its vastly improved driving dynamics and intuitive user interface.

It’s paired to the familiar ZF 8HP50 eight-speed automatic transmission; no manual option is available in the 2017 5 Series. Make of that what you will, but the simple fact is that any aspect of a car that affects emissions and fuel consumption will soon become extinct if it can’t be controlled by a computer. Hey, at least the transmission is a good one, far advanced from the five-speed autobox fitted to the E34 540i.

As for the chassis, perhaps the most important thing to know is that it was developed under the direction of Klaus Fröhlich, who recently joined the BMW Board with responsibility for R&D. That’s a crucial position, one that gives Fröhlich more influence than anyone else over how BMW’s cars perform and feel. Fortunately, he’s no technocrat. He’s an enthusiast of the first order who was earlier responsible for making the F32 4 Series handle like a BMW when the pre-facelift F30 3 Series really didn’t thanks to an insufficiently robust chassis.

Fröhlich wanted the G30 5 Series to feel “adult,” but he also knows that a BMW has to deliver when its driver decides to attack the corners on a twisty road…or even on a race track. BMW didn’t provide a track for our first drive in the new G30, but we did have plenty of opportunity to test its driving dynamics on the twisty two-lanes of south-west Portugal.

It didn’t disappoint. The 5 Series may be a “mature” sedan, one in which ride quality and comfort figure prominently in its portfolio, but it’s capable of impressive pace and precision on a back road. It feels lighter than its curb weight would suggest, especially when equipped with the optional Integral Active Steering fitted to our test cars. By moving the rear wheels counter to or in the same direction as the fronts, IAS improves the car’s handling at all speeds, whether for increased agility or greater stability. 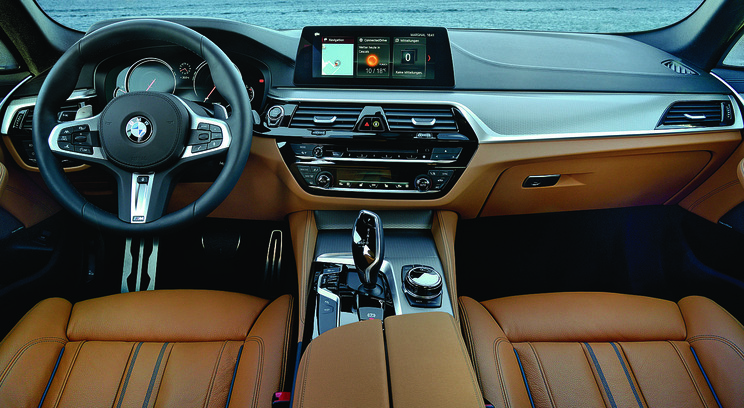 The steering itself is electromechanical, with a rack ratio of 16.1:1 where the LCI 3 Series has a ratio of 15.1 and the 7 Series’ is 16.9. More important perhaps is the feel, which is neither dead nor as tactile as that of earlier cars with hydromechanical steering. As with the manual transmission, hydraulic assist is gone, but at least BMW has listened to enthusiasts’ complaints about lifeless electric steering. In the new 5, the engineers gave priority to on-center precision, a good call given that most of these cars will see extensive freeway duty. On or away from the center, feedback through the wheel is just fine, and the sensations seem well matched to what’s actually happening where the rubber meets the road.

The tires themselves have a lot to do with that, of course. Our test cars were riding on Michelin Primacy all-seasons, which were designed for comfort over performance. They can also be found on the Toyota Camry, which probably tells you as much as you need to know about how they feel. U.s. cars equipped with the M Sport Package of our test 540i will undoubtedly come with higher-performance rubber to suit demanding U.S. customers.

Inside the 19-inch wheels of our M Sport cars reside a set of M Sport brakes that make the entire package worthwhile. Longtime BMW enthusiasts can only cheer at the availability of four-piston calipers and large-enough rotors on a 5 Series sedan. It’s a welcome development even for street-driven cars. 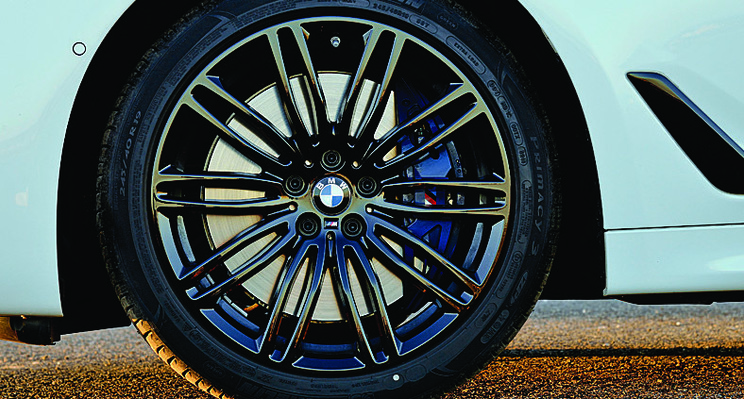 Further inboard, the F30 rides on double-wishbone suspension up front and a five-link configuration at the rear. The car’s F10 predecessor had double wishbones, too, but they didn’t work all that well thanks to a flaw in geometry that caused a vibration at speed. With the experience they gained in deploying double wishbones on the last 5 Series as well as the X5, the engineers were able to revise the G30’s geometry for more “organic driving goodness,” as one engineer remarked.

This is a 5 Series for driving, and it was engineered by enthusiastic drivers—not just fröhlich, but the entire team. Knowing that the company hadn’t really gotten it right with the last 5 Series, they took a back-to-basics approach on the new G30, taking care to dial-in the mechanicals for the car’s mission. Comfort is always a priority in a 5 Series, but driving dynamics have to be there in any BMW.

Beyond the wheels, tires and suspension, the biggest factor in how a car handles is its weight. As mentioned earlier, the new 540i tips the scales at 3,847 lbs.; by comparison, the outgoing F10 535i checked in at 4,090 lbs. given its ever-so-slightly increased dimensions, that weight reduction is almost a miracle, especially since BmW didn’t employ its expensive Carbon Core technology on the 5 Series. Even in more pedestrian steel and aluminum, however, BMW has created a stiff, responsive, solid-feeling chassis that offers a just-right level of insulation from harsh inputs and road noise without feeling floppy or imprecise when cornering loads increase. I’m impressed.

As is traditional, the new 5 Series gets trickle-down technology introduced on the most recent 7 Series, here updated to take advantage of the latest developments in both autonomous driving and the driver-machine interface. 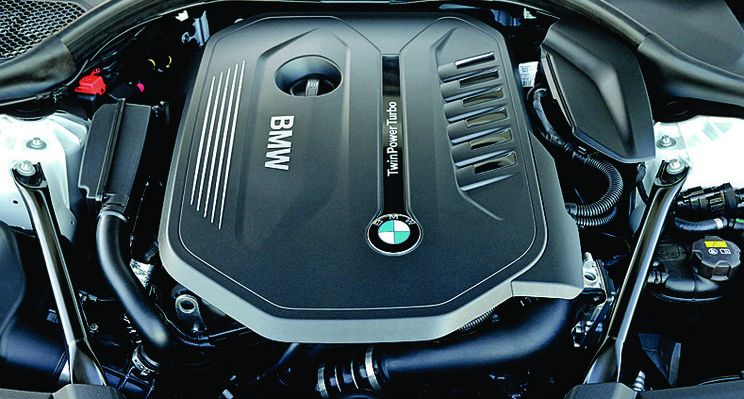 With respect to the former, the G30 gets Active Cruise Control with Stop & Go, which keeps pace with traffic at up to 130 mph (!) and prevents rear-ending the car up front; Aactive Lane Departure Warning, which keeps the car in its lane while the driver fiddles with the radio or nav system and prevents lane-change incidents with blind spot detection and side collision avoidance, both of which steer the car; Evasion Aid, part of ACC, which can steer the car evasively if the vehicle in front stops suddenly; and Remote Control Parking, which allows the driver to exit the car so that it can park in spaces too narrow to allow the doors to be opened. That fully autonomous feature isn’t yet permitted in the U.s., which still requires drivers to remain in the vehicle while it’s in motion.

The driver-machine interface is changing so rapidly that automakers can scarcely keep up, and the typical seven-year cycle of automotive development is ill-suited to the kind of constant and dramatic revisions that we’ve come to expect from computers and hand-held devices. Nonetheless, automakers are forced to live in this brave new world of ever-evolving connectivity, and to do their best to employ technology safely and intelligently within the automobile.

The new 5 Series features the latest version of the iDrive control system, which was introduced in 2000 and has been under constant development ever since. The graphics are better than ever, naturally, with more precise renderings and a larger (10.25-inch) screen. The interface, too, feels distinctly more modern, enabling a level of customization that any iPhone user will recognize. The menu positions are no longer fixed on the screen; now they can be moved around so that their organization makes sense to the user rather than to a committee of engineers at BMW. That’s a big philosophical shift, by the way, taking BMW away from the “we know best” approach and toward a level of user-configurability that’s already the reality in our other devices. 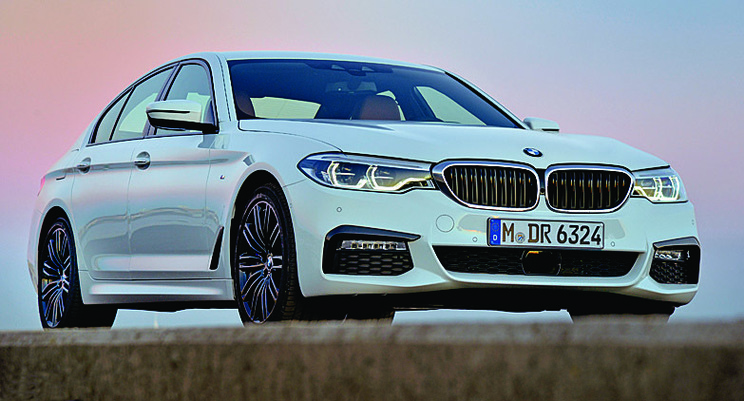 Inputs can be made via the familiar iDrive controller, should you wish to enter information the old-fashioned way, or by touch, voice or gesture. (The G30 has two touch screens, actually: the main display and the iDrive controller.) Gesture control first appeared on the 7 Series as a way to accept or reject phone calls or change the audio system volume; now it can be used to control additional functions. You can zoom in or out of the map with your fingers just as you would on an iPhone, but without touching the screen, and you can point with two fingers to carry out an individual command like starting route guidance or skipping to the next track of an audio playlist.

Of even more utility to the car’s core purpose are the improvements to the head-up display. With about 75% more area to work with, the designers have been able to project more information than ever onto the windshield in front of the driver. That means more detailed navigation instructions as well as more information about road conditions, speed limits, car data and entertainment functions. It’s cool stuff, and it makes driving a lot safer by giving drivers far fewer reasons to take their eyes from the road.

Interestingly, all connectivity features now fall under the responsibility of BMW Design rather than engineering, even though they’re obviously engineered. As a result, the level of design integration with the car’s interior is higher than ever, and the in-car electronics feel and function like an essential part of the car rather than add-on accessories. The ergonomics work well, too, allowing easy access to everything the driver needs in a way that’s entirely familiar to traditional BMW enthusiasts. Just as they did in the E34, the controls fall readily to hand, and everything is exactly where it should be in the new G30.

If this car has a theme, that’s it. Even as it pushes forward into new levels of connectivity and autonomy, it still looks and feels familiar. Stepping out of a 20-year-old E34 into a new G30 reveals a world in which everything has changed except the essential character of a BMW 5 Series. 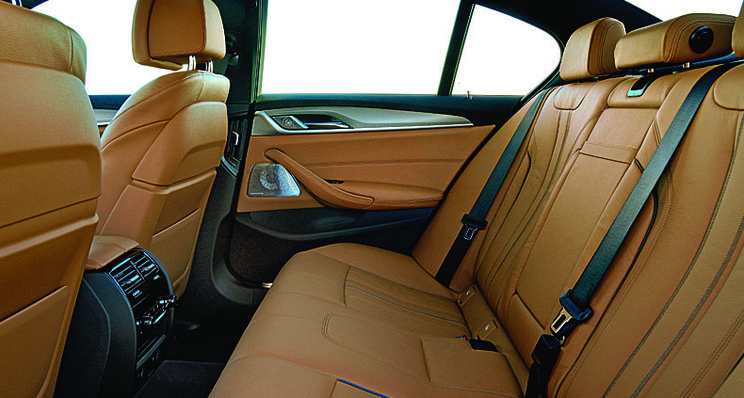 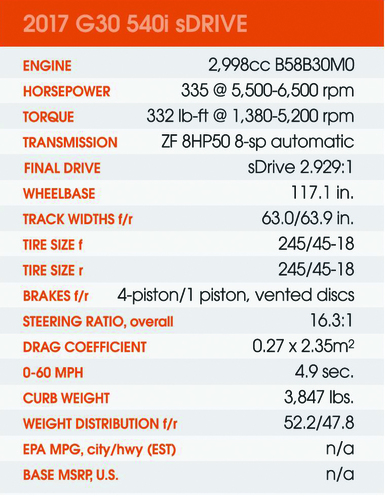 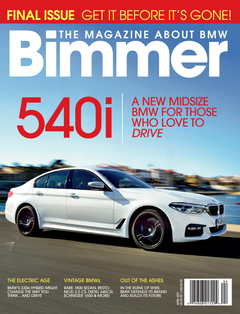