The Sound of Speed

With 648 horsepower, Lawrence Henrard’s turbocharged E46 M3 is obviously fast, but the real seduction is the glorious sound coming from its engine bay. 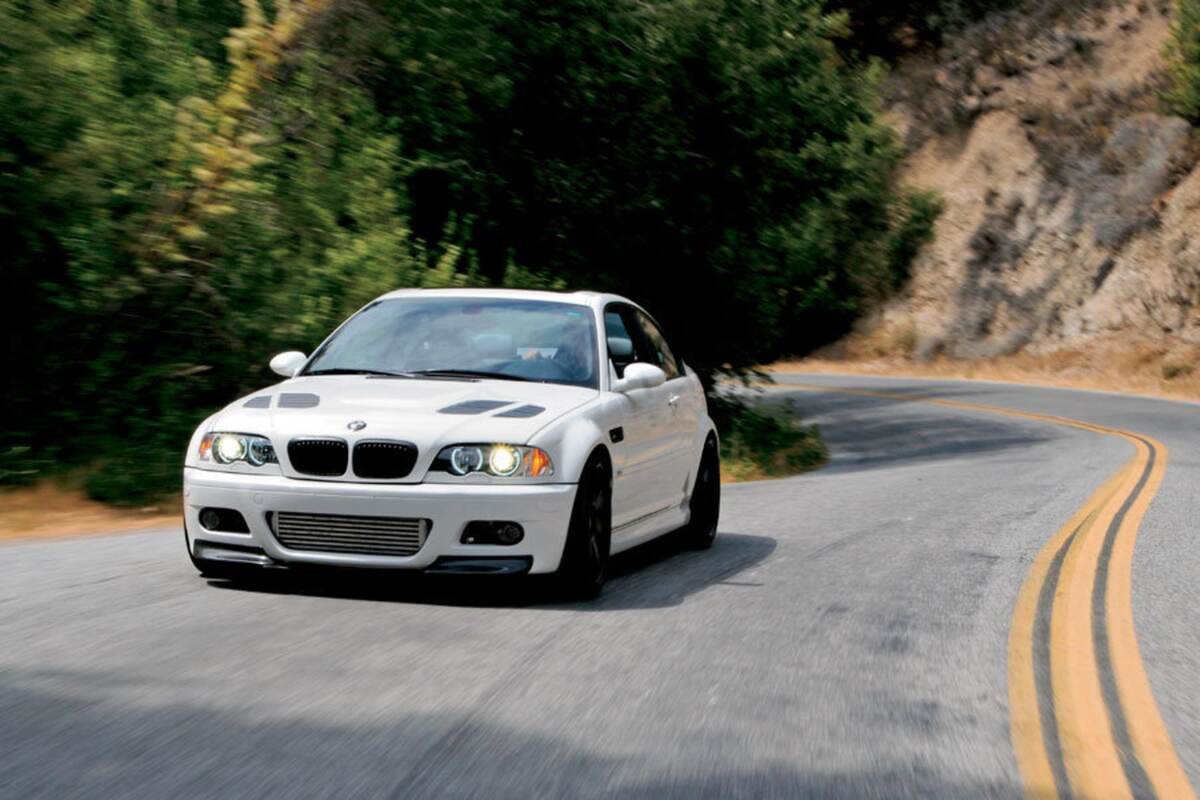 As the S54 six spins toward redline, the sound of the boost escaping from the blowoff valve punctuates every upshift. It’s intoxicating, and so is this E46 M3’s acceleration. It’s rocketing us down Monterey’s Reservation Road as quickly as anything we’ve ever driven, making us glad for the rapid-fire shifting of SMG—if this car had a manual, we might not be able to keep up.

“It’s kind of a silly car,” laughs its owner, Lawrence Henrard. To make sure we understand exactly how silly this turbocharged M3 really is, he’s encouraging us to press down ever harder on the throttle so that we miss none of its mind-boggling acceleration.

It would help, of course, if the road didn’t have so many darn curves. Normally, a series of fast corners would be catnip to the driver of an E46 M3; in Henrard’s car, they’re almost an impediment. We’ve got more than 600 horsepower at our command, and all we really want to do is see how fast those ponies will propel this M3 down the straights.

Corners aren’t the only thing limiting our speed. There’s also the matter of traction. Putting 600+ ponies to the rear wheels puts quite a strain on the rear tires, and the DSC light on the dashboard is flashing furiously as the electronics try to contain it. 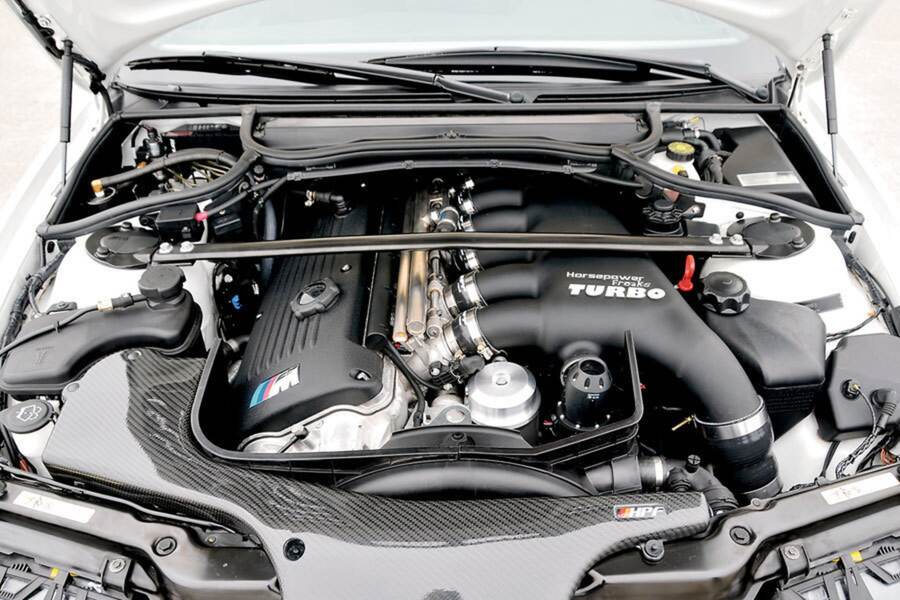 “I was running Michelin Pilot Sport Cups on all four wheels, but it didn’t hook up,” Henrard explains. “I put some drag racing tires on the back, and it’s a lot better.”

If this is an improvement, those Michelins must have been seriously overwhelmed, because even these 275-section Nitto NT05s are having a tough time keeping up with the power being sent rearward from a fourth-gear, full-throttle application of the S54 six. Not that we’re complaining, of course. We’ll take a fun car over a perfect car any day, and Henrard’s M3 is very fun indeed, in a silly kind of way.

“It has so much power that it’s become more of a straight-line car,” Henrard says. “But that doesn’t mean I won’t drive it through Big Sur—it’ll be great for passing tourists!”

Letting a turbo be a turbo

With over 600 horsepower, you can pass just about anything on the road, even a line of cars trapped behind a Winnebago on one of the world’s best driving roads. Henrard could take a spin through Big Sur on a lunch break from his job as the COO of a produce refrigeration company in the nearby Salinas Valley, and he wanted to make sure his M3 wouldn’t spend too long behind any motor homes. With that in mind, he sent it to Horsepower Freaks in Portland, Oregon for a Stage II turbocharger installation that would more than double its power output.

It wasn’t the first power-up mod he’d tried. The car had already been fitted with a VF supercharger—first a Stage I, then a Stage II—which boosted power to 449 hp and 296 lb-ft at the rear wheels but didn’t give Henrard quite what he was looking for. “The car made good power, but it didn’t have that fast-car feel, so I decided to try something different,” he says. 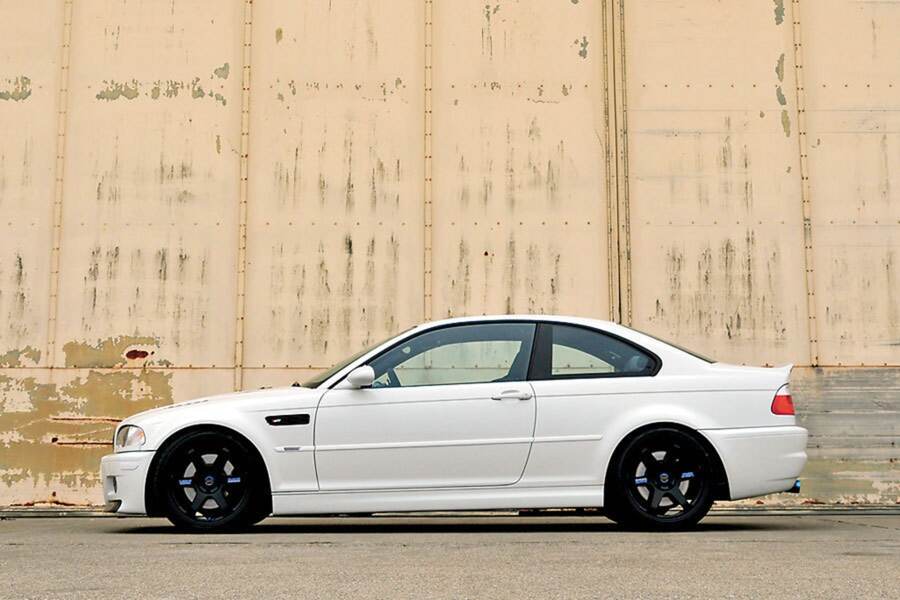 The HPF turbocharger has certainly given his M3 that “fast-car feel.” If anything, the car feels even faster than the numbers suggest, because the way it makes power is so explosively turbo.

BMW has started using turbochargers to boost the power of its own engines while keeping fuel economy and exhaust emissions reasonable, but the OEM approach to turbocharging is diametrically opposed to that taken by Horsepower Freaks. If BMW wants to make turbocharging invisible to the end user, Horsepower Freaks wants you to feel every ounce of boost in a visceral way.

Where BMW uses turbos to boost torque rather than top-end horsepower, HPF lets a turbo be a turbo without the drawbacks usually associated with this form of forced induction. Like the N54 turbocharged six used in the 135i and 335i models, for instance, the HPF-modified S54 in Henrard’s car exhibits virtually no turbo lag, and it develops power smoothly right off the bottom.

Where it diverges from the BMW approach is in making horsepower that climbs steeply from about 3,500 rpm to around 7,800 rpm. The N54, on the other hand, starts to run out of steam by about 5,800 rpm, and its power drops off sharply at around 6,200 rpm even though the engine still has another 800 rpm before redline. It’s a little disappointing for those who like to rev an engine all the way, and it limits acceleration by making a longer time-in-gear unproductive except as it saves a shift.

The N54 is also notable for its torque curve that isn’t a curve at all but a straight line that shows a steady 295 lb-ft from 1,300 rpm to 5,000, where it drops off considerably for the last 2,000 rpm. As those numbers indicate, the N54 is powerful and charismatic but doesn’t offer a lot of high-rpm excitement—something the Horsepower Freaks-tuned engine in Henrard’s M3 has in abundance. 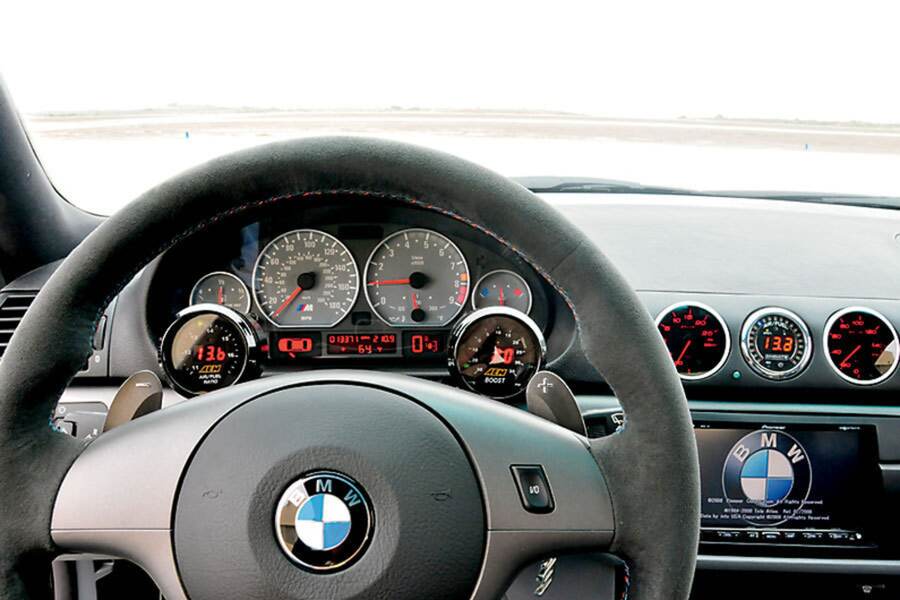 Big numbers from the S54

Thanks to variable mapping, the car can be run on any of four fuel combinations: 91-octane pump gas, pump gas with methanol, 110-octane race gas or race gas with methanol. Tested on the HPF dyno in all four configurations, it recorded a minimum of 454.72 hp and 315.42 lb-ft at the rear wheels on straight pump gas (slightly more than it made with the supercharger).

On race gas and methanol, the HPF dyno recorded outputs of 647.88 hp and 468.19 lb-ft at the rear wheels. Horsepower climbs steadily and sharply to its 7,800 peak—on the dyno, it’s held slightly below the stock S54’s 8,000-rpm redline—with no troughs or valleys to mar the ascent. The engine is also making at least 400 lb-ft of torque from 4,100 rpm onward, and torque builds steadily until it peaks at 6,800 rpm and then drops off gradually.

We drove the car on race gas and methanol, and our stint behind the wheel confirmed what the dyno graphs suggest: The engine loves to rev, and it makes smooth, seductive power all the way to redline. Things happen quickly when you press the throttle, and not only where the rubber meets the road.

As a Stage II engine, this S54 six is still running its stock internals, which means pistons with a 11.5:1 compression ratio— a lot higher than the N54’s 10.2:1, and quite high indeed for a turbocharged engine. The S54 is a rev-happy engine even in stock, naturally aspirated form—it’s one of the things we’ve always loved about it—and the HPF turbocharging treatment has only made it more so.

The fast-revving engine gets a little help in turning its power into forward motion from Henrard’s choice of a 4.10:1 differential built by Jim Blanton to replace the stock 3.62:1 rear end. Between the shorter diff ratio and the added power, the car runs through the gears so fast it’s incredible. As we mentioned upstream, SMG is a big help in keeping up—and in managing the torque on downshifts thanks to its sophisticated electronics. 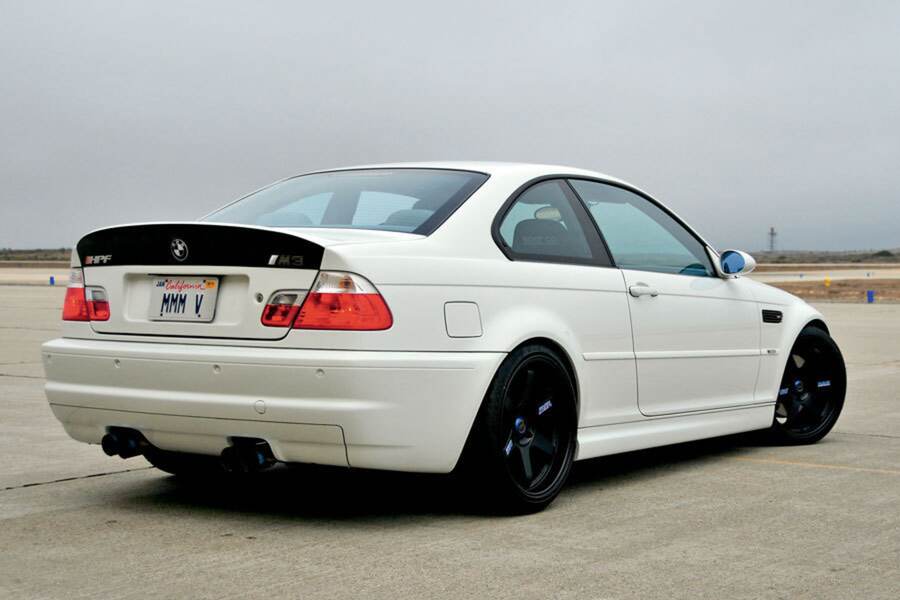 “My last M3 had a six-speed manual, but I’ve become a big believer in SMG,” Henrard says. “I love how rapidly it shifts, and I love the way it engages and feels.”

Here it’s mated to an HPF clutch, whose feel is hard to evaluate through SMG but which certainly proved capable of handling the turbocharged engine’s massive power without complaint, and in sending it rearward with efficiency.

As extreme as the power mods are, the car as a whole doesn’t feel overwhelmed by them. The balance has been tilted in favor of the engine, of course, but Henrard’s E46 M3 hasn’t lost any of its back-road aptitude as a result; you just have to be a little more careful when you get on the throttle exiting a turn. As we put it through its paces on Carmel Valley Road, we’re reminded yet again what an excellent platform this really is, and why the E46 M3 has been a favorite of tuners since its debut in 2000. The car responds exceptionally well to modification, especially when care is taken with parts selection and setup.

Henrard fitted a set of Ground Control coilovers with 500-lb. springs and a set of Hotchkis hollow anti-roll bars that measure 30mm up front and 25mm in the rear—much beefier than the stock 26mm and 21.5mm bars—and are three-position adjustable for added stiffness.The setup seems ideal, minimizing body roll without compromising ride quality. Even on bumpy Carmel Valley Road, the car remained smooth, comfortable and composed; an impressive feat given its stiff, precise feeling on smooth tarmac. The shocks have a supple, high-quality feel, and they’ve also been set up by someone who took the time to get it right rather than simply bolt on the parts and hope for the best.

Suspension always works better when unsprung weight can be kept to a minimum, so Henrard fitted his M3 with a set of one-piece Ray’s Volk Racing TE37 forged alloy wheels that measure 8.5 × 19 inches up front, 10.0 × 19 inches at the rear and weigh just 18 lbs. each. These Japanese wheels are an unusual choice on a BMW—most owners go with something more predictable, like the BBS RGRs that Henrard originally fitted—but they look great, and their custom matte black finish contrasts nicely with the car’s Alpine White paint. 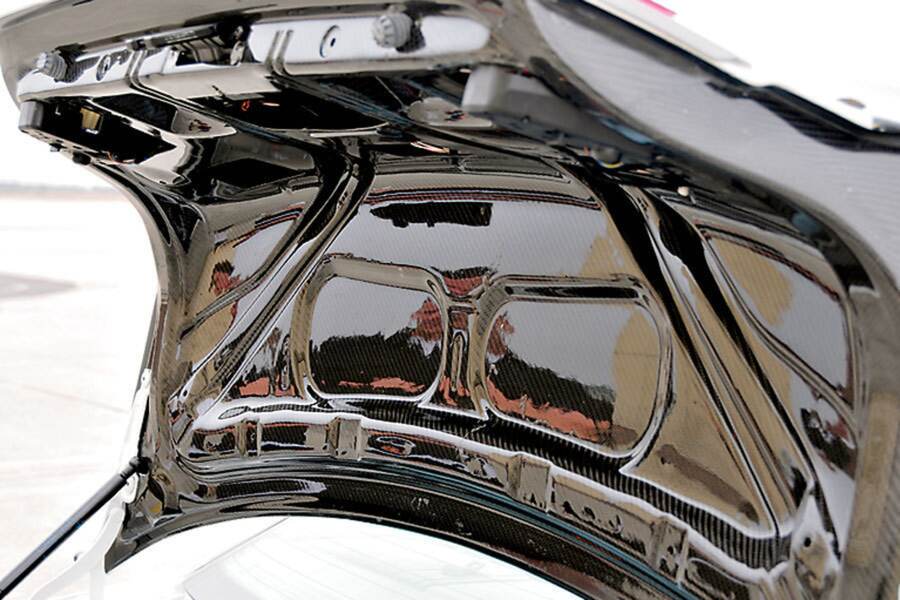 So does the hint of carbon fiber that has been left visible on the car’s Vorsteiner trunk lid, hood and front lip spoiler. Henrard wanted to keep the visual effects subtle while still shedding weight, and indeed his car looks almost stock—at least at a glance—unless you peek under the ultra-lightweight hood or look inside the cockpit. There, the car has been made far more purposeful for serious driving with a pair of Sparco Evo 2 race buckets, an Alcantara-covered steering wheel sourced from the M3 ZCP parts book and a custom gauge set that was installed with the earlier VF supercharger.

Even if you miss those mods, you’ll probably be tipped off to the fact that this car is making serious horsepower by its sound. At a standstill, it idles with a deep rumble that escalates into a throaty growl as the car gets underway, but it never becomes truly loud.

The sounds from the engine bay are almost as distinctive as what comes out of the (rasp-free) Agency Power exhaust: Between the Horsepower Freaks Stage III-IV intake and the HKS blowoff valves, the car does a pretty good job of announcing the turbocharger that’s boosting power to almost 650 horses at the rear wheels.

Reining in those horses is currently tasked to the stock M3 brakes, but Henrard has a set of six-piston Brembos on order that should allow this car to stop as well as it goes. With that, his car will be complete, and all that will remain will be to keep the methanol tank full and enjoy the ride.

He’d only put about 200 miles on the car in its current configuration at the time of our photo shoot, but Henrard is sure that there’s a lot more fun to come with this E46 M3.

“I’ve driven a lot of very fast cars, and this one is awesome,” he says. “I usually get a new car every 12 months, but I think I’ll keep this one for a long time.”

We certainly would, if only for the thrill of hearing the intoxicating whoosh! of the blowoff valve every time we shift gears. 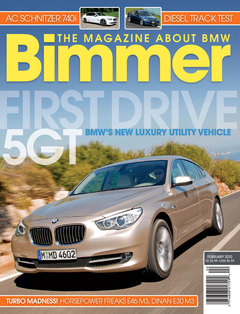