A slew of upgrades can’t change the fundamental character of this Bavaria, which remains a sterling example of solid engineering and straightforward design after 40 years on the road. 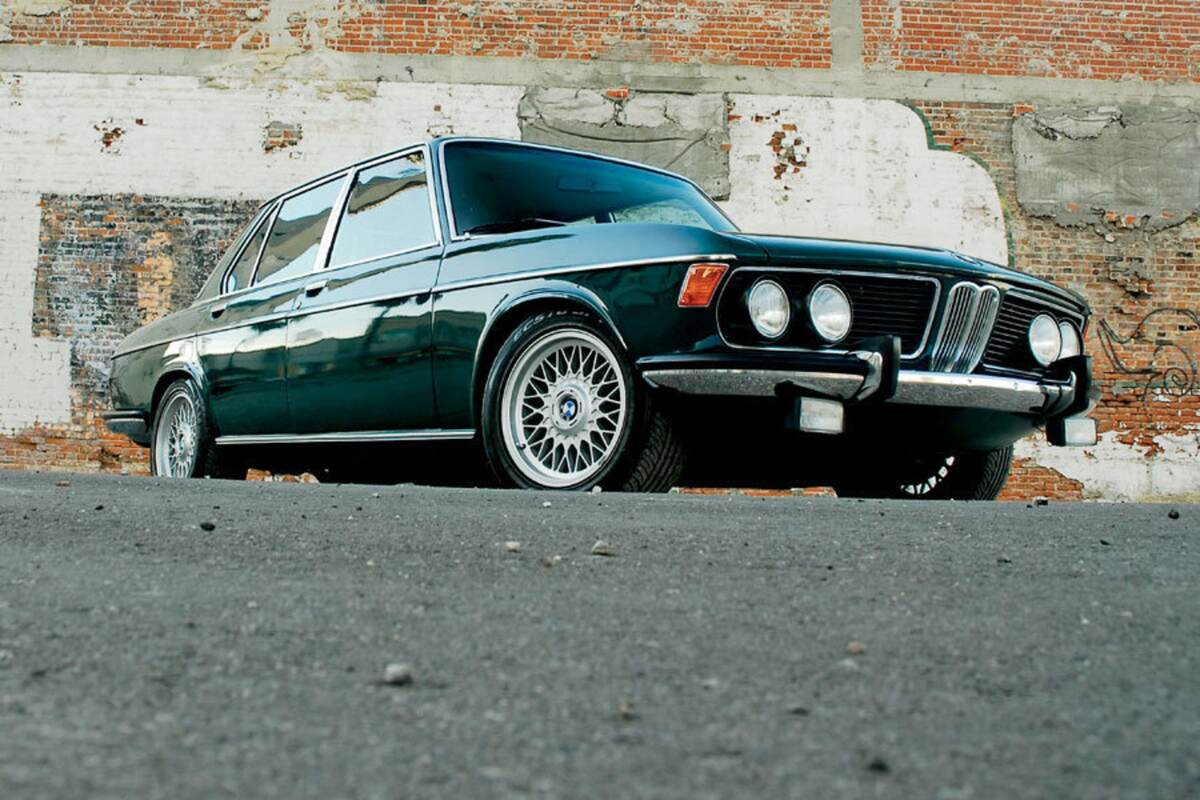 I’m not sure whether it’s the Agave Green color or the perfectly lowered stance, but Tim Chinen’s 1972 Bavaria makes me smile when I spot it in the parking lot of an In-N-Out Burger in Long Beach. There’s just something about the Bavaria’s straightforward, uncluttered lines that continues to appeal more than 40 years after these sedans first rolled off the assembly line in Munich. It’s the kind of big-hearted car that makes you speak in clichés, unintentionally saying things like, “They just don’t make them like they used to.” The Bavaria is rolling proof that they don’t, and it seems to fill everyone who sees it with nostalgia for the good old days of solid—and stolid—German engineering.

“Almost every time I drive it, someone comments on it—at gas stations, parking lots, while I’m driving in traffic,” says Chinen.

On the road, this Bavaria feels as good as it looks, thanks in large part to the aforementioned swap to lower, firmer suspension and a set of larger alloy wheels sourced from a later 7 Series. More importantly, the Bavaria’s original twin Zenith-carbureted 3.0-liter M30 has been replaced with a fuel injected 3.4-liter M30 engine sourced from an ’85-88 E28 535i. 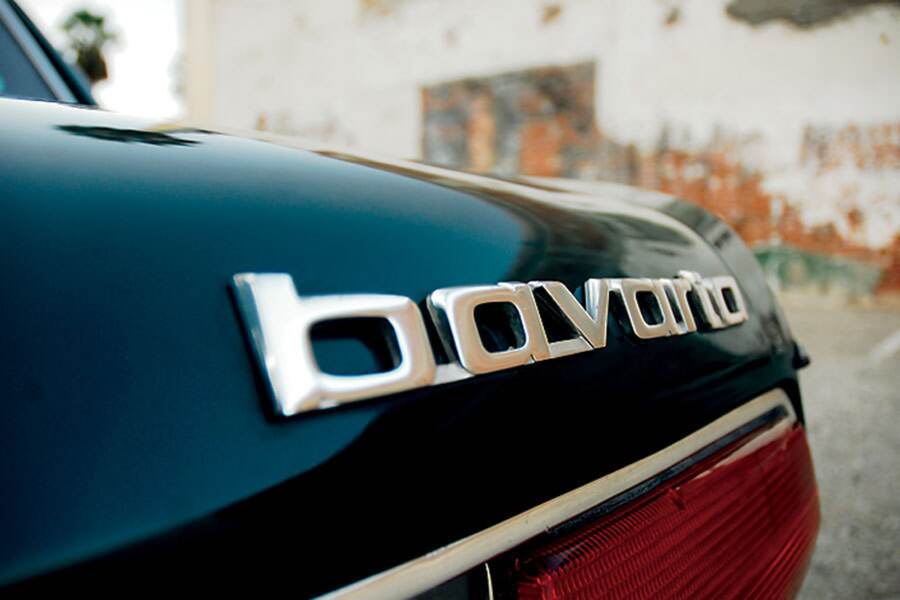 In stock form, the larger engine makes only slightly more horsepower—182 instead of 170 hp—but significantly more torque: 214 lb-ft instead of 185. The added torque of the injected engine really brings the Bavaria to life, especially when mated with the E28’s Getrag five-speed transmission and limited-slip differential, which Chinen’s car also features in place of its original four-speed and open differential.

The drivetrain improvements were already in place when Chinen bought the car, having been installed by previous owner Pete Schoenenberger. Schoenenberger sold the car to Chinen’s longtime friend Eric Ingraham, who took Chinen for a ride in it shortly after he purchased it in 2006.

“I told Eric to give me a call if he ever decided to sell it,” says Chinen. By early 2009, the Bavaria was for sale and Chinen couldn’t resist, despite already having an E36 M3 parked in his garage—he’s been driving BMWs since high school and has owned a number of M3s—along with a pristine, low-mileage Porsche 914 bought new by his father. 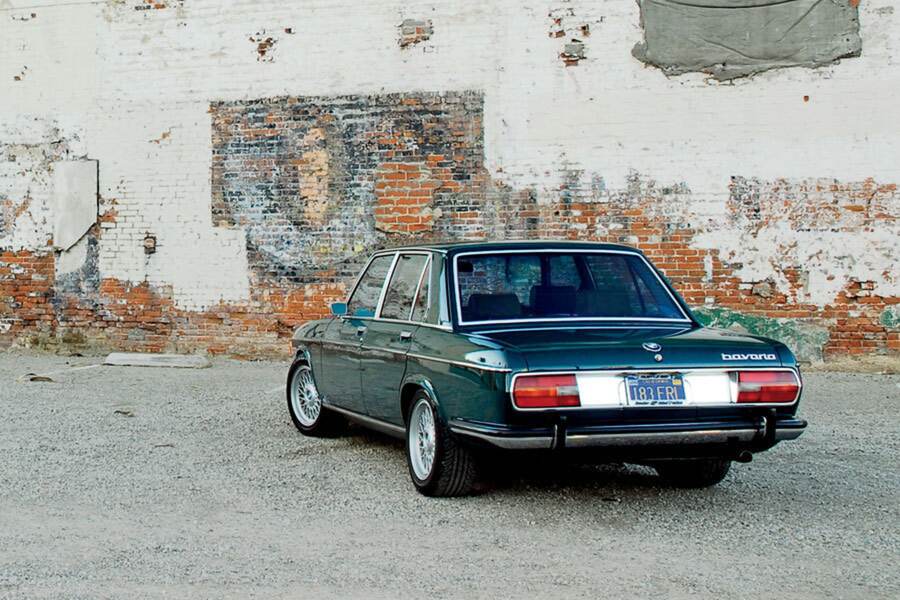 “I’ve always had an appreciation for old BMWs and Porsches,” he explains, “so I thought this was such a cool car, especially since it had tasteful upgrades from newer BMW models to make it a more modern and better-performing car.”

Chinen is lucky to enjoy such improvements without having endured the headaches involved with doing the mods himself. Installing the later engine wasn’t especially difficult, but its larger intake manifold wouldn’t allow fitment of the standard Bavaria brake booster. Though an E28 booster will fit, Schoenenberger used an even more compact unit from a 2002tii to free up more room in the engine bay, where the E28’s Motronic system and its attendant parts were also swapped from the E28. An E28 clutch master cylinder was used, and the Bavaria’s original driveshaft was shortened to fit between the E28 gearbox and differential. Rather than employ an E28 radiator, Schoenenberger fitted a high-efficiency unit from Silicon Garage.

The Bavaria’s suspension was also tweaked to keep up with the increased horsepower. Lowering springs from (Chinen believes) Suspension Techniques have been paired with Bilstein Sport shocks up front and Konis at the rear. A set of E12 5 Series anti-roll bars reduce body roll during aggressive cornering, while a set of front and rear strut tower braces stiffen the chassis. 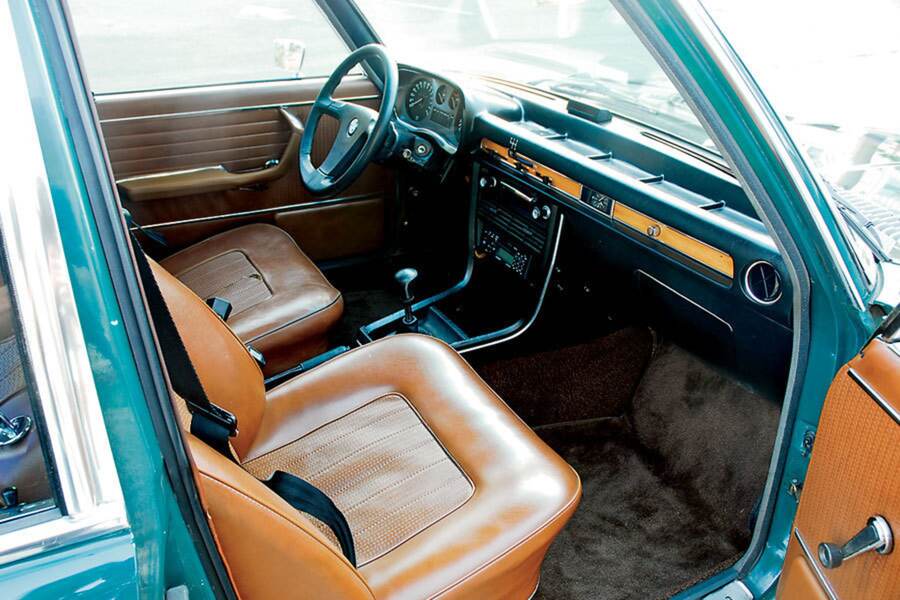 The Bavaria makes do with its original four-wheel disc brakes, upgraded with PBR Deluxe pads and braided steel lines in place of the original rubber brake lines for a firmer pedal feel.

Schoenenberger’s upgrades thoroughly transformed the Bavaria, improving its performance to that of a 1980s car rather than one built in the late ’60s. Chinen has followed with a few modifications of his own, which have further improved the car. To the M30 engine’s electronics, Chinen has added an EAT chip from Mark D’Sylva, which he says has resulted in a marked improvement in throttle response and driveability. “The overall powerband is better, especially at part-throttle and below 3,500 rpm,” he notes.

The car was riding on a set of smaller “bottle cap” wheels when Chinen purchased it, but it also came with a set of 8 × 16-inch Original BMW alloys sourced from an E38 7 Series. Chinen shod these with 225/50-16 Kumho Ecstas and mounted them on the car for a big improvement in grip and appearance. Their classic cross-spoke pattern suits the Bavaria’s simple lines perfectly, but the fitment required a slight adaptation. “With the 225-width tires, I have to run seven millimeter spacers in the front so that the tires don’t rub on the strut,” says Chinen. 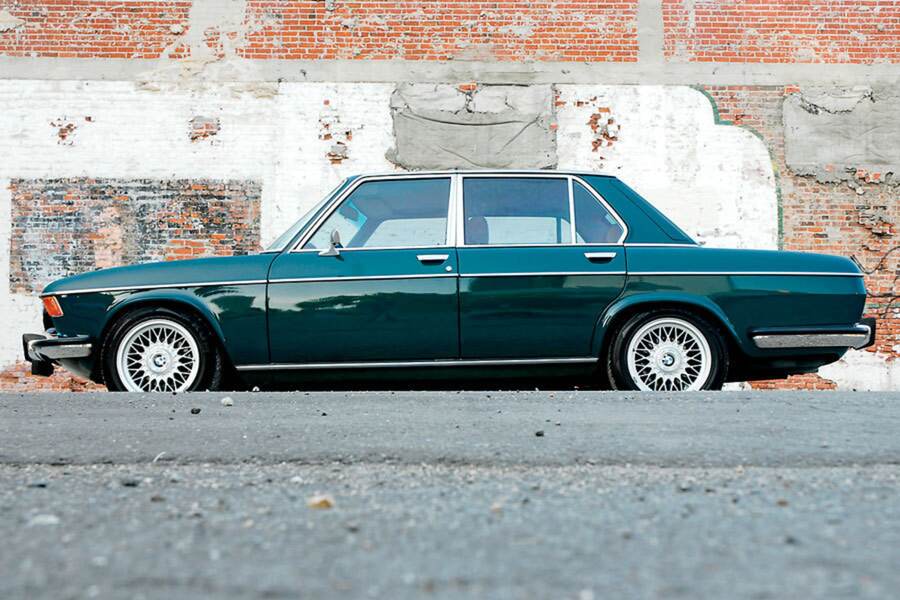 Transported back in time

When we swing open the Bavaria’s door, we’re transported back in time. With the exception of an early E28 steering wheel, the airy interior remains stock. The Dark Tan upholstery looks rich and inviting, and it complements the Agave exterior perfectly. The seats are slab-sided and offer little in the way of bolstering, but they are very comfortable. Once we’re seated behind the wheel, outward visibility is terrific thanks to the generous greenhouse.

On the road, the Bavaria impresses with its combination of vintage refinement and more modern performance. The increased power from the larger and later M30 engine really brings the car to life. It revs smoothly and cleanly, aided by the D’Sylva chip, and it sounds great. The exhaust has a muted bellow to which a metallic howl is added at higher engine speeds.

As I belt the Bavaria away from a stoplight, the M30 picks up revs quickly. Though it isn’t blindingly fast, the Bavaria builds speed in a purposeful manner, comfortably reeling in the horizon. Running through the gears is extremely gratifying, a short shift kit making the shift action quick and positive with none of the excess slop common to older Bavarias. 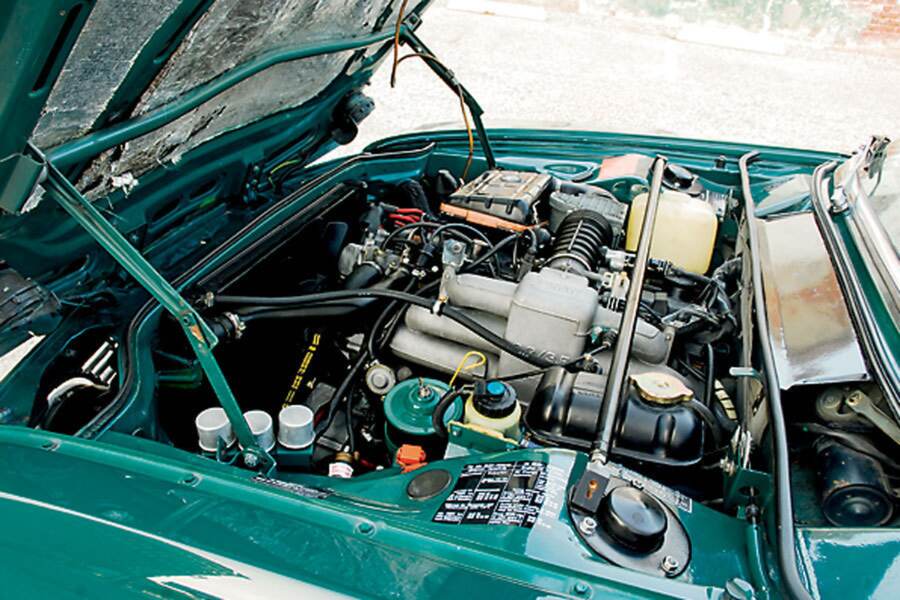 The Bavaria turns as well as it accelerates, cornering with a little body roll and plenty of stability. Once the suspension takes a set, the big BMW feels surprisingly nimble, though it lacks the finesse displayed by a later E12 or E28 5 Series. There’s not too much feedback from the extremities of the long wheelbase, but the tires feel latched to the pavement. The only thing that dulls the experience is the boat-like steering, which is neither quick nor all that responsive. But the Bavaria still feels great to drive, whether around a series of sweeping bends or simply down the boulevard.

“It performs very well, especially on the freeway. It will cruise at 80 mph all day long with no effort, even 90 to 100 mph,” Chinen notes. “It’s not a fast car, but its acceleration could surprise people since it looks like an old classic. It’s difficult to describe, but it just has the classic BMW characteristic and is very enjoyable to drive.”

We agree with that sentiment wholeheartedly, and even those who haven’t driven it seem to concur. At the recent SoCal Vintage BMW Meet, Chinen’s Bavaria won the award for Best E3—a fine accolade for a car that still sees regular road use. 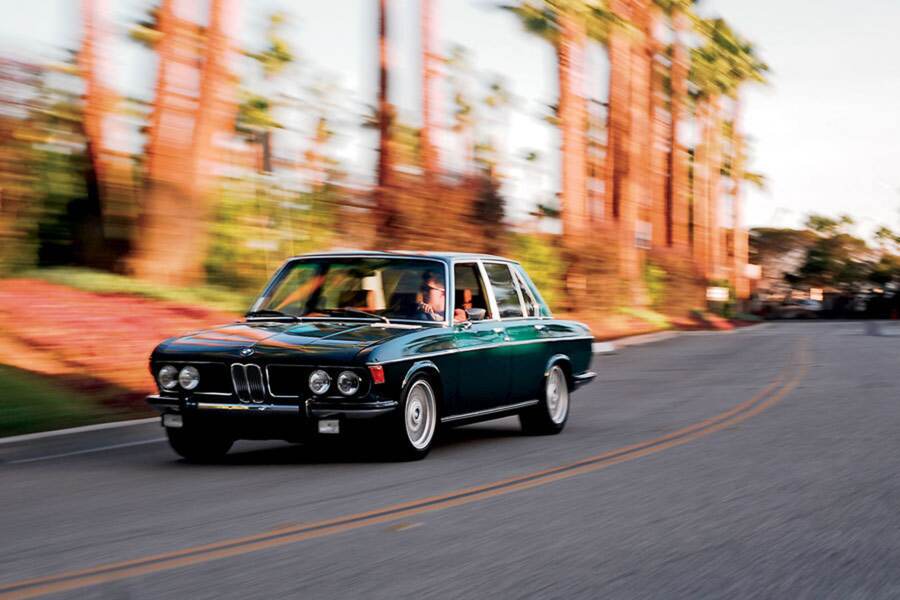 “It’s a driver, not a garage queen,” he says. “I use it as a weekend car, for errands, and I also commute to work in it about two days a week. It splits the daily driver duties with my ’97 M3.”

We’re not sure how Chinen decides which BMW to drive on any given day, but we know which keys we’d reach for if given the choice. As fun as an M3 can be, the Bavaria has the kind of charisma that makes us smile, whether we’re behind the wheel or simply admiring it in a parking lot, and that makes the choice rather obvious. 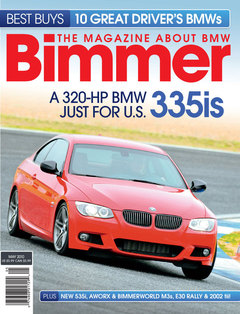