Marc Ghafouri’s smart restoration-modification pays homage to the 2002 Turbo while keeping this carbureted ’02 true to its origins as a charming but simple street machine. 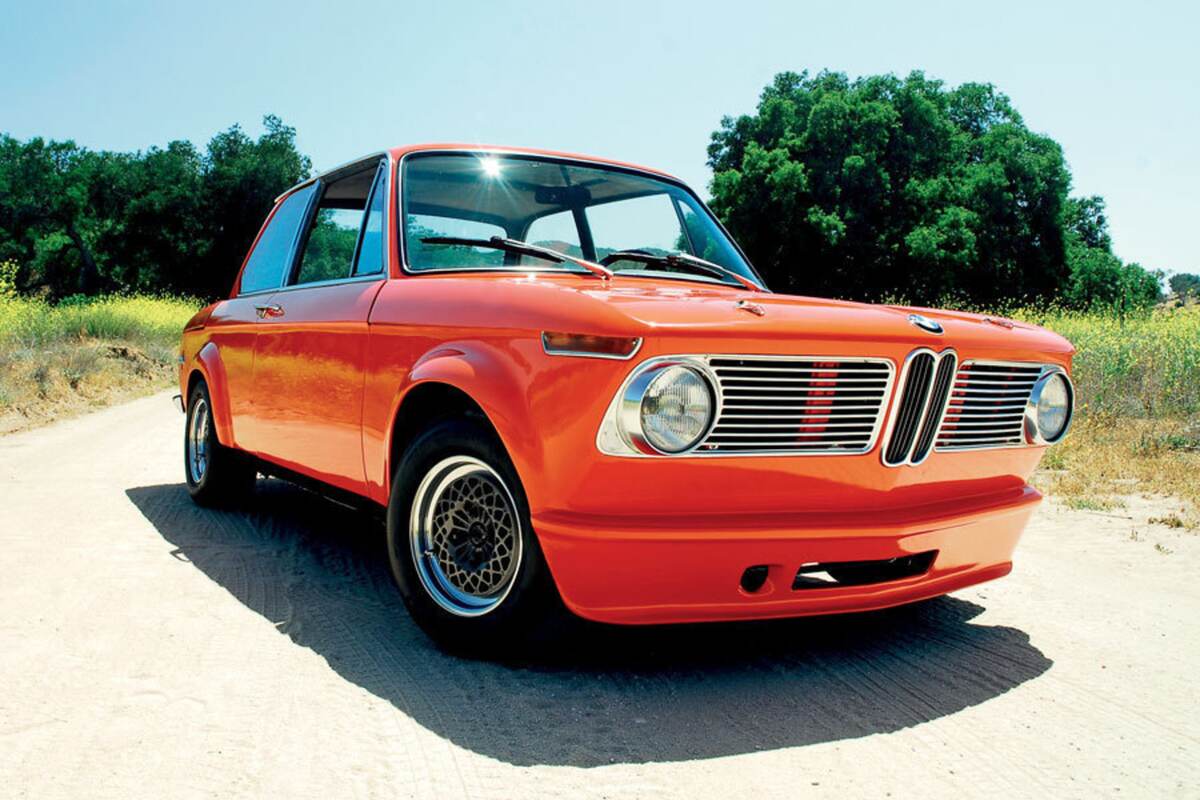 That’s the word that comes to mind as I survey the interior of Marc Ghafouri’s 2002. Not simple in a bad way, simple in a good way. The dashboard provides the driver with only the most important information: oil pressure, water temperature, fuel level, engine speed and miles per hour. There’s no navigation system, no rear-view video, no lane change warning lights. The abundance of amenities (embarrassment of riches?) that characterizes a modern BMW is nowhere to be seen, and neither is it missed. A 2002 like this one provides a terrific reminder of how simple things once were, even in a relatively sophisticated vehicle like a BMW.

Of course, the interior of this particular 1972 2002 is simpler than most, having been modified by its owner on a “less is more” philosophy. In the interior, Ghafouri has stripped out most of the sound deadening material, covering the floor in dark grey carpet, and he’s replaced the stock seats with a pair of one-piece Cobra Classic buckets. The Cobras may be minimal compared to the originals, but they’re more supportive, too, not to mention grippier. So is the Alcantara that Ghafouri has lavished on the dash, headliner, door panels and a few other places, a big improvement over the less tactile trim that originally graced the 2002. 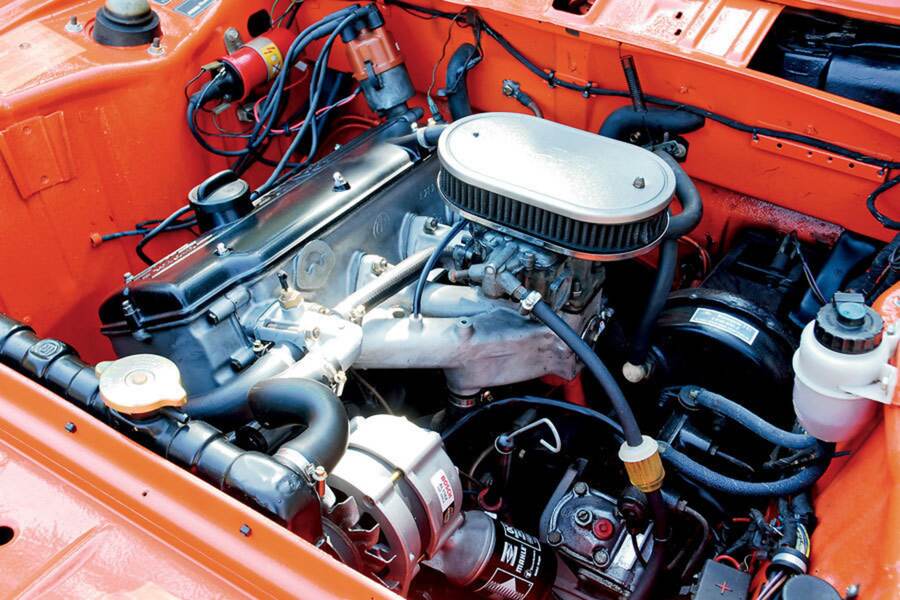 The interior mods are merely the start of the personalization program undertaken by Ghafouri since he bought the car nine years ago. It’s the second 2002 he’s owned since moving to the U.S. from Iran, where Ghafouri’s older brothers passed down their enthusiasm for BMWs.

“I’ve always loved them, ever since I was nine years old,” Ghafouri says. “Growing up in Iran, my four older brothers always drove ‘Deuces’ [2002s] and Alfas.”

Ghafouri didn’t get his own 2002 until 1993, by which time he was happily employed as an airline pilot in Southern California. 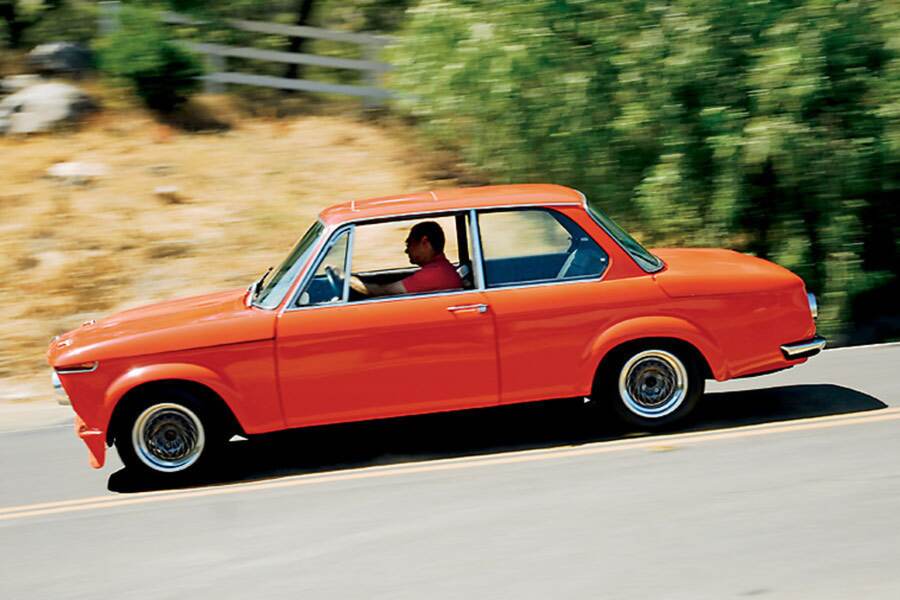 “I bought a ’76 2002 from the Vasek Polak dealership,” he recalls. “It was a stock, low mileage car, but I really wanted a round taillight model.”

In early 2001, he sold the car to a friend and asked his mechanic to look for a suitable candidate to restore and possibly modify. A few months later, his mechanic called to tell him about a ratty-looking but sound 2002 for sale in Los Angeles.

“It was faded red, but it was straight with no rust and it drove really well,” Ghafouri says. “It felt really tight and the engine had a lot of spunk, so I bought it, figuring I’d restore it.” 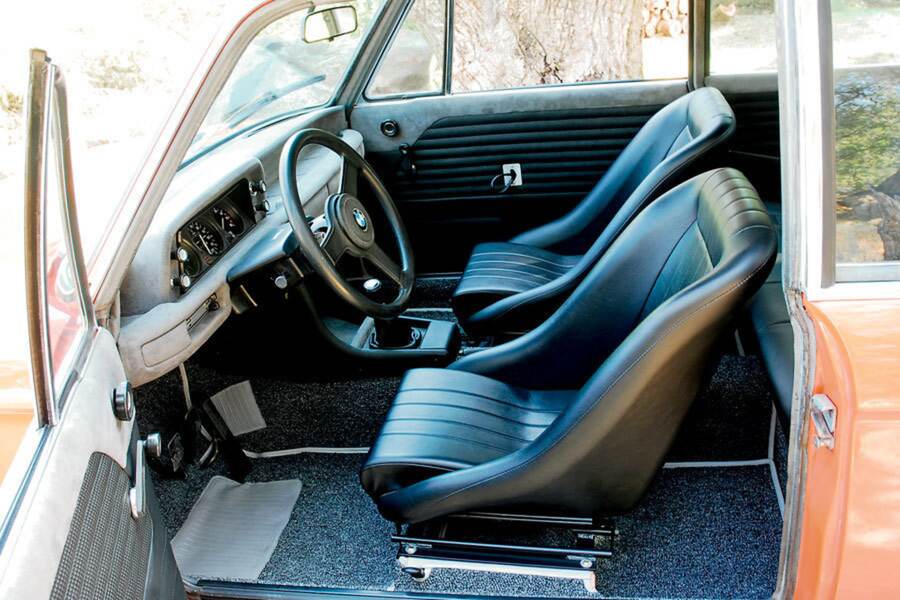 Despite that intention, he enjoyed driving it so much that he couldn’t bear to send it away for a full restoration. Its 2.0-liter four was torquey and fun, and the car already had a five-speed 320i transmission mated to a desirable and rare 3.90:1 limited slip differential, making the old BMW an absolute blast to drive.

Nonetheless, Ghafouri wisely opted to upgrade the suspension and brakes for additional roadworthiness. The Bilstein shocks were gusseted for added strength and paired with shorter, stiffer springs from Suspension Techniques. Front camber plates were installed for more negative camber and to allow Ghafouri to dial in more caster, a great advantage on 2002s. A strut brace was added to reduce chassis flex, and a pair of Hardy & Beck anti-roll bars went in to reduce body roll.

Ghafouri achieved a cost-effective brake upgrade by sourcing a pair of front calipers from an older Volvo and fitting them with high-performance street and track brake pads clamping vented E21 320i discs. At the rear, the 2002’s stock drums and wheel cylinders were replaced with larger components from a Neue Klasse BMW sedan. Stainless steel brake lines firm up pedal feel for easier brake modulation. 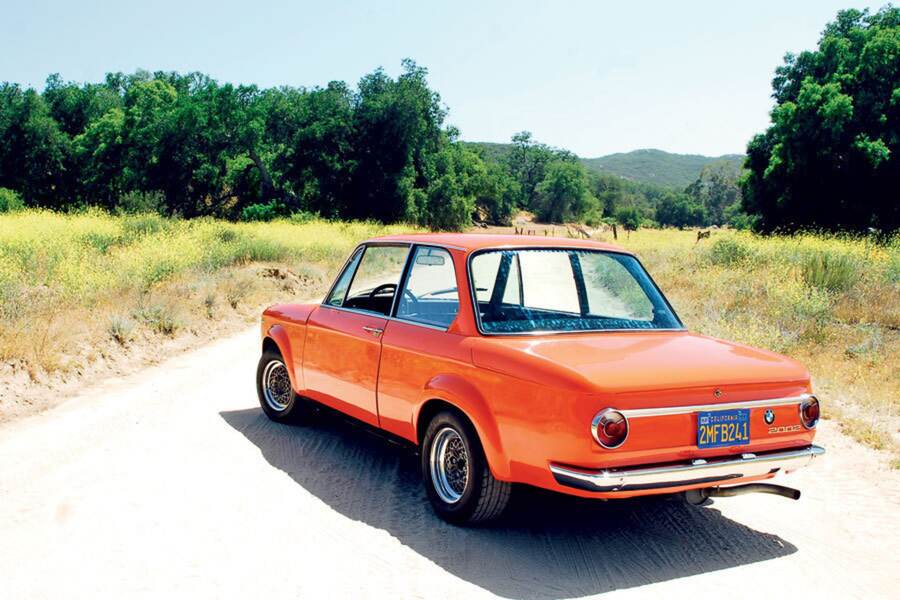 So modified, the 2002 was pressed into use as a daily driver.

“It looked like crap, but it was a great driver,” says Ghafouri.

A round taillight restoration

In 2004, Ghafouri acquired a modified Porsche 930 to use as a fun weekend car and occasional daily driver alongside the 2002. As the 930 came to consume more of his attention, he realized it was a good time to treat the BMW to a full restoration. Deciding to turn the ’02 into a lightweight, high-performance homage to the 2002 Turbo while retaining the naturally aspirated engine, he delivered the car to SoCal restorer and technician Jeff Tighe. 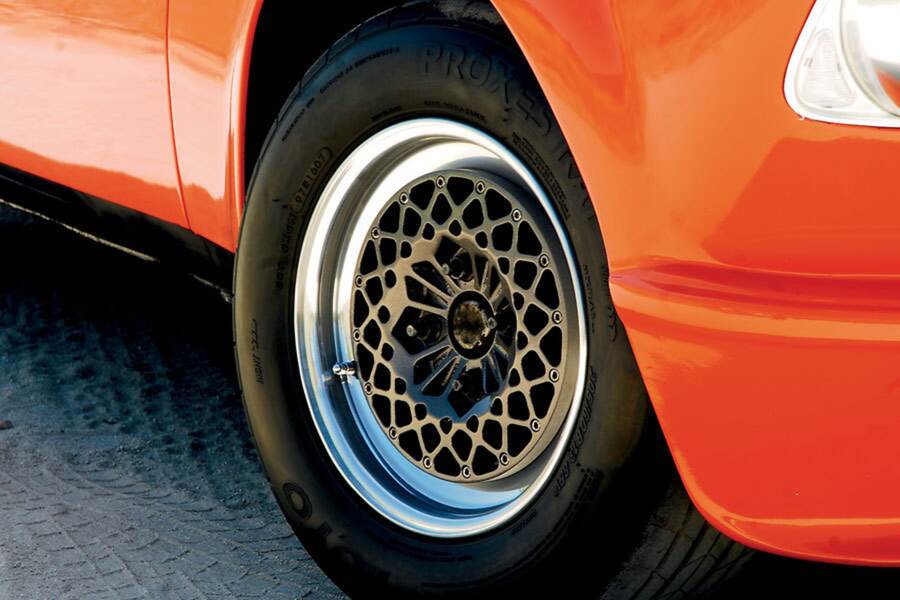 At Tighe’s shop, the BMW was stripped down to its rolling chassis and the fender openings trimmed in preparation for the fitment of fiberglass Turbo fender flares. Since Ghafouri wanted to use wider-than-stock wheels at the rear, the fender wells were tubbed for added clearance. To reduce weight, the 2002’s original steel hood and trunk lid were replaced with lighter fiberglass panels that are held in place with metal pins. Some minor rust spots were repaired and the fender flares installed before the entire body received several coats of Inka Orange, an original ’02 paint color.

Tighe built the car’s M10 four-cylinder with a stock but balanced crankshaft actuating stock but balanced connecting rods. These attach to a set of Mahle pistons with a 0.50 overbore and a more performance-oriented 10.5:1 compression ratio instead of the stock 9.5:1. The stock 264° camshaft was replaced by a 300° camshaft from BMW Motorsport.

To keep the motor cool, the radiator was upgraded to the same type found on the 2002 Turbo, here with a lighter four-blade fan from an earlier 2002 in place of the original Turbo fan to free up revs and power. The same doctrine was applied to the gearbox, where both the flywheel and clutch were lightened to reduce mass. 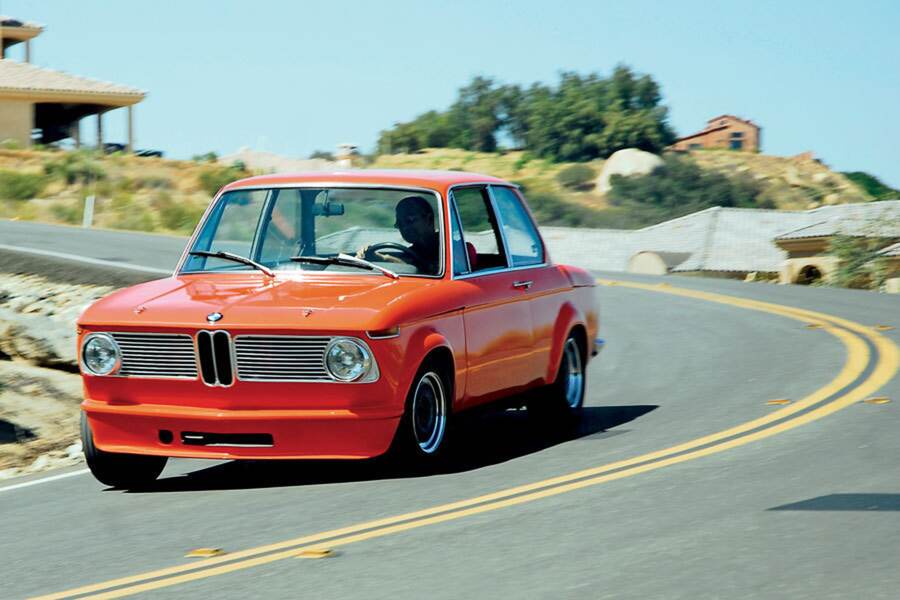 A single 38/38 DGAV Weber carb supplies the engine with the correct air-fuel mixture. Since this 2002 is for street use only and Ghafouri wanted to keep sound levels relatively civilized, he went for the conservative combination of a Stahl header backed by an Original BMW exhaust.

“They look really cool, but in retrospect I probably wouldn’t have used them,” admits Ghafouri. “We bent them a couple times when we were just trying to mount the tires.”

There’s no denying their aesthetic perfection, however, especially since they’ve been restored with highly polished lips and moody bronze-colored paint. The wheels are shod with super-sticky Toyo Proxes RA1 tires that measure 205/60-13 at all four corners.

Not fast, but fun

By the time we’re ready to take the 2002 for a drive on the winding roads that slice through the idyllic landscape around Ghafouri’s Temecula, California home, I’m already enthralled by this Inka Orange beauty. A twist of the key brings the trusty M10 to life with a snort as the downdraft Weber inhales air and the mild exhaust system exhales it.

Slotting the gear lever into first feels nice and direct, as does the drivetrain when we take off. On the open road, the 2002 is a vintage car at its best. The motor has plenty of old school charm, but it also provides enough motivation to keep up with modern traffic.

The 2002’s small size makes it extremely easy to place it wherever I want to during cornering. The steering wheel delivers plenty of feedback from the front end, and the seat tells me exactly what the rear end is doing. The 2002 is relatively neutral on these narrow roads, and any understeer that rears its head during cornering is easily balanced with the throttle. On the way out of turns, the engine displays a feisty eagerness, revving quickly through the gears.

Is it fast? No. Does it have limitless reserves of grip? No. But even at modest speeds, this car is fun in a way that has evolved out of newer cars, not just BMWs. No wonder Ghafouri can’t resist using the 2002 as an occasional commuter when he’s off to work as a commercial airline pilot.

Despite owning a succession of impressive sports cars—from street and race M3s to a Porsche 930 and even a Ferrari 328—Ghafouri continues to gravitate toward the vintage 2002. His continued enthusiasm for the “Deuce” speaks volumes about the effectiveness of the car’s engineering, and its timeless appeal as a boxy but charming example of sound automotive design. 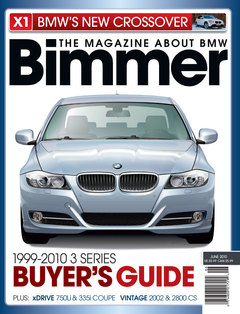