With a 300-hp engine mated to underwhelming suspension, the 135i Convertible makes an excellent argument for less power and better handling. 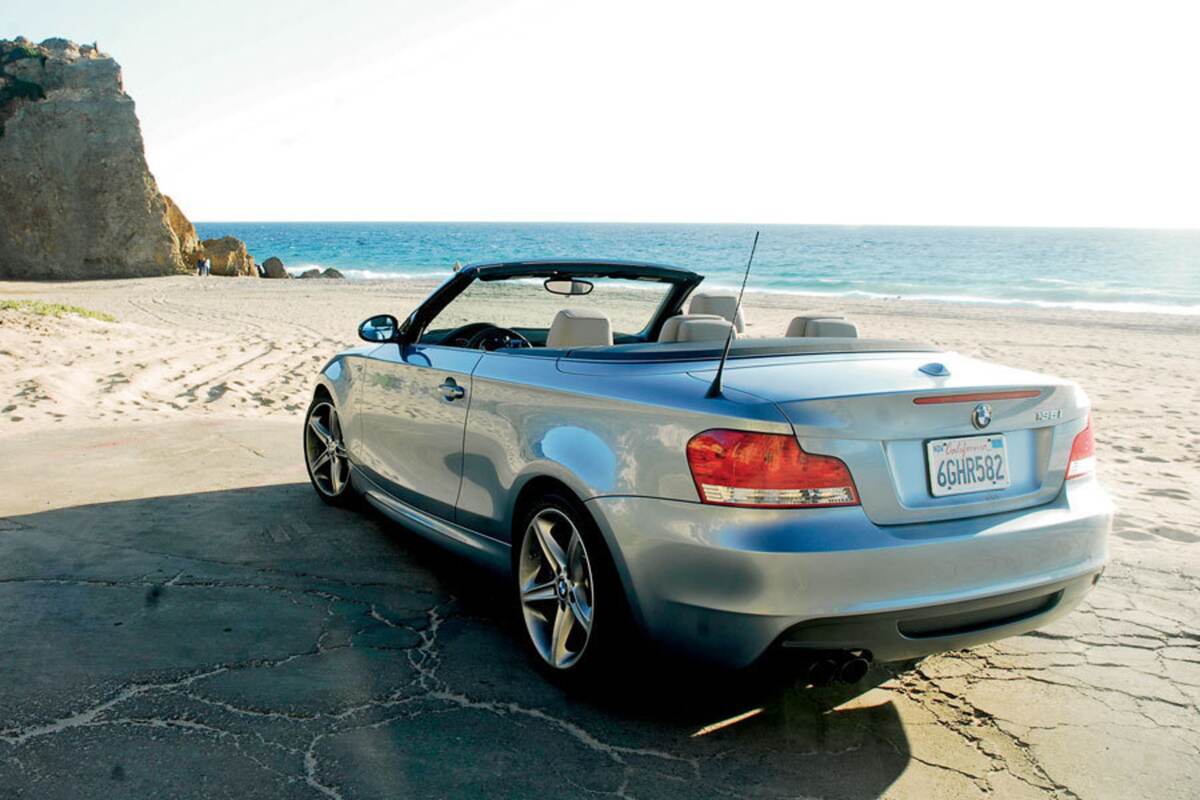 More power is always better, right? It’s certainly been BMW’s mantra of late, and it’s driven the development of nearly every car sold in the U.S. These days, even relatively run-of-the-mill cars like the 335i and 135i are powered by the exceedingly talented (though outgoing) twin-turbo N54 engine, the 300-hp six that has helped BMW’s current lineup become its most powerful ever.

Usually, I wholeheartedly agree with the “more is better” line of thinking when it comes to engine power. An abundance of torque and a horsepower-rich powerplant usually make the driving experience that much more entertaining.

But after spending a few days with a 135i Convertible, I’m not so sure. Sure, the 135i is quicker than the majority of cars on the road. In stop-and-go driving, it’s fun racing to the next traffic light on a tidal wave of forced induction while leaving unsuspecting Boxster owners eating Bavarian dust.

Beyond pure acceleration, the 135i Convertible delivers a gratifying driving experience at moderately aggressive speeds on smooth sections of serpentine blacktop. But “moderately” is the key word, and therein lies the rub. When push comes to shove, the 135i just isn’t that well composed. The sheer amount of grunt put out by its engine feels at odds with its less-than-dialed-in chassis and suspension setup, which makes it comfortable as a daily driver but far from outstanding as a back-road burner. 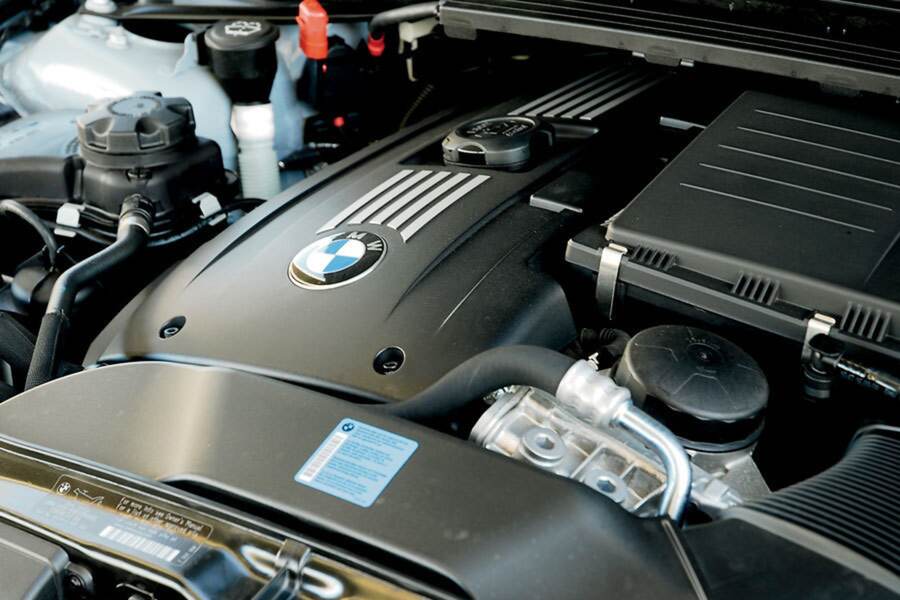 A dent in driver confidence

Last summer, I drove a 128i Convertible on the same roads I tackled in the 135i Convertible and came away impressed. The 128i’s N52 straight-six is an engaging, smooth-revving powerplant in the best BMW tradition. Maybe I’m looking back through rose-tinted sunglasses, but the 128i’s relative lack of power—just 230 horsepower rather than 300—made its softly sprung suspension a less-glaring deficiency.

If you try to take advantage of the 135i’s quick and direct steering, for instance, you’ll soon notice that it isn’t transmitting enough feedback from the tires to your hands. Just as you realize you’re running out of grip from the front tires, you’re already out of grip and the 135i’s nose is understeering toward the outside of the corner.

And should you try to correct for that inherent understeer by trail braking to make the rear end come around, the car feels unstable due to a lack of body control. That, in turn, puts a dent in driver confidence.

In the end, the 135i makes it extremely difficult to string together a tight series of turns in a cohesive, satisfying manner. What should be fun ends up becoming a white-knuckle experience in which you feel more like a passenger than a driver as you try to control the wallowing, pitching and bucking of the 135i’s softly sprung chassis as it tries to rein in 300 horsepower and nearly 3,500 lbs. of metal, plastic and glass. 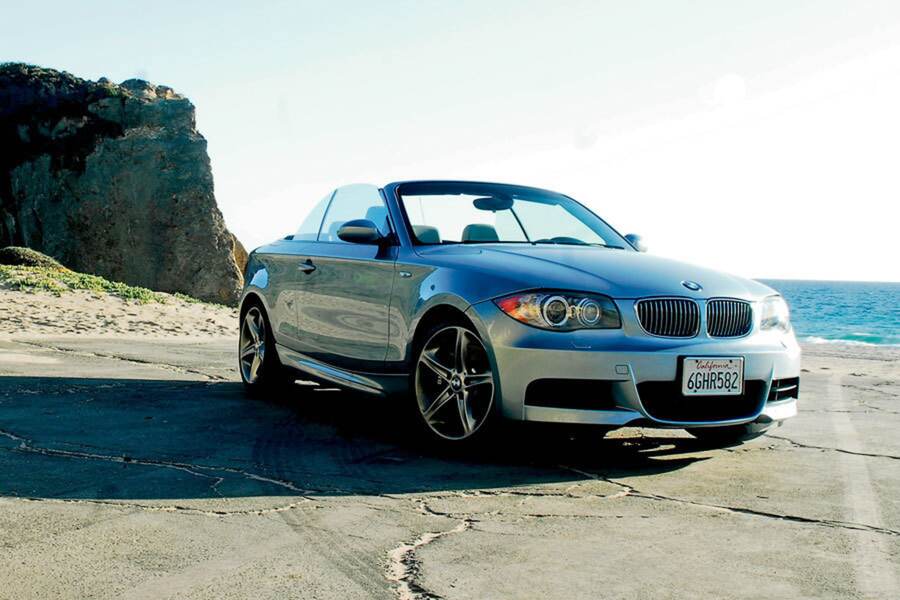 A clue to the 135i’s lack of poise in the chassis department is found in the window sticker. Our test car came with the optional Sport Package ($1,100), which includes Sport seats, 18-inch alloys and an M-emblazoned Sport steering wheel. Since Sport suspension is standard on the 135i Convertible, it therefore isn’t part of either the standard Sport Package or the M Sport Package ($1,200). That means this 135i has the same suspension setup as our earlier 128i Convertible with Sport Package…and for aggressive driving, it’s still not sporty enough.

A dominant engine and an outstanding gearbox

Despite its shortcomings in the suspension department, the 135i Convertible is an outstanding car. Predictably, the twin-turbo N54 dominates the driving experience, providing instant power and acceleration throughout the rev range. The N54 climbs willingly to redline if you desire, but there’s so much power off the bottom and in the midrange that you can short-shift and still maintain a brisk pace. However you choose to shift it, the benchmark Getrag Type G six-speed offers light but positive shift action both up and down through the gears.

The N54 sounds terrific, too, especially with the top down. Driving sans roof brings the added bonus of letting the subtle growl of the engine fill the cockpit much better than it does in a coupe.

On the stopping end of things, the 135i’s six-piston brakes are more than up to the task of slowing the BMW, though I did encounter some brake fade on a particularly steep downhill section of canyon road that caused me to take it easy for a few miles until the brakes recovered. At all other times, though, the brakes slowed the 135i with authority through the easily modulated pedal. 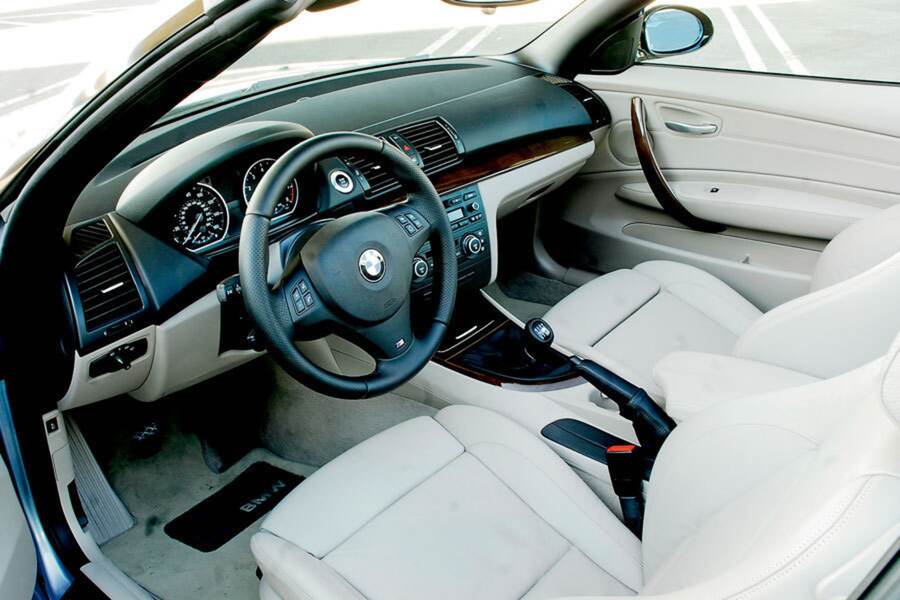 The 1 Series’ styling may be polarizing, but it was certainly complimented by the Blue Water Metallic paint of this example. A beautiful shade, the color works even better when combined with the $1,450 Taupe Boston Leather interior, which itself was enhanced by an M Sport carbon fiber shift knob that made changing gears even more pleasant than usual.

However, the irony of having not just one but two interior accessories with Motorsport emblems wasn’t lost on me. While the 135i Convertible excels as a car that can get you from point A to point B in style and speed, it falls short of being a finely honed driver’s tool.

Which I suppose brings up the 135i’s intended role: Was it ever intended to be a finely honed driver’s tool? Methinks not. BMW’s engineers undoubtedly gave this car handling that would suit most of its buyers most of the time, and they know that those customers aren’t likely to push the car hard enough to notice its sportive shortcomings. And if they do, they’ll be too busy enjoying the superb acceleration and top-down sunshine to care.

For drivers who prize handling as highly as they do horsepower, however, the 135i Convertible is far from an M car even with Sport Package…no matter what the steering wheel and shift knob tell you. 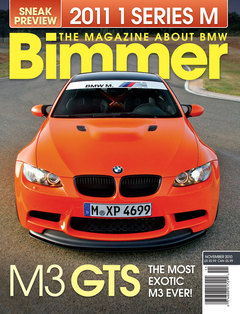