Fit for a Tycoon 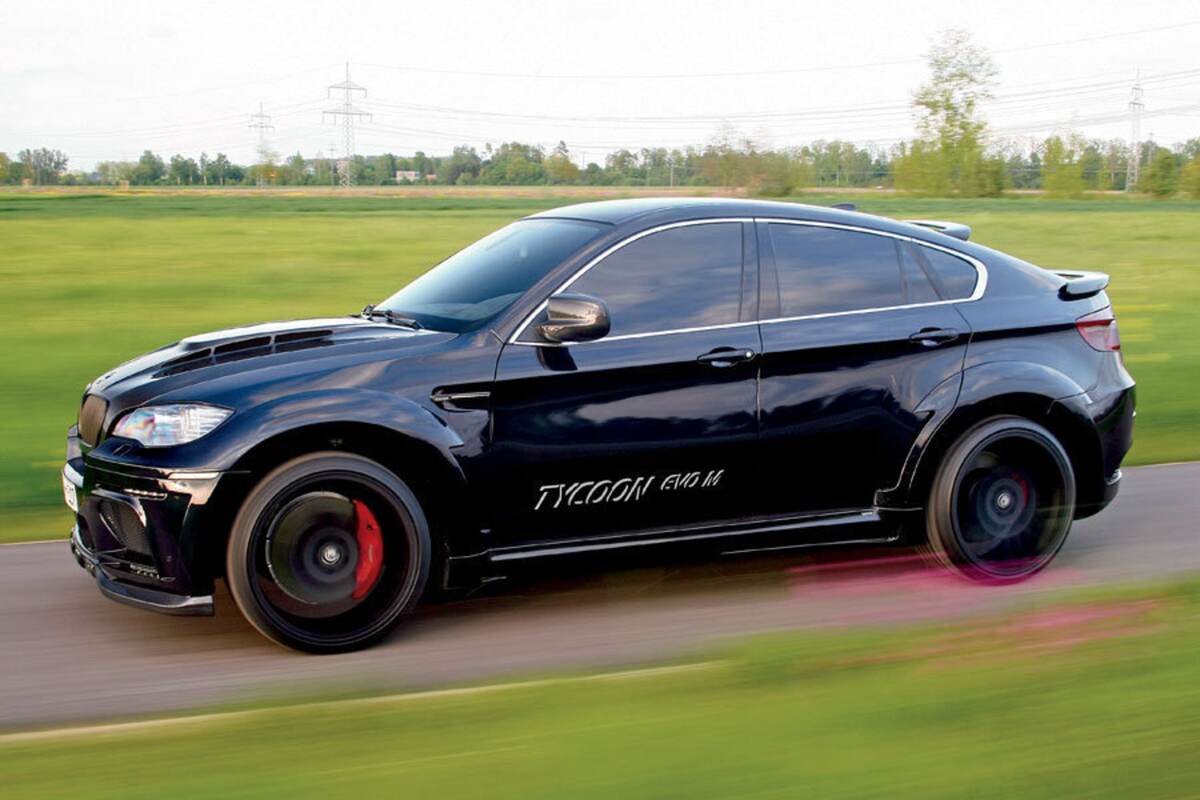 In today’s global economy, some business leaders have more power than heads of state. The Russians call them “oligarchs,” a term with negative connotations rather like “robber barons” in the U.S.

In the Far East, top businessmen are sometimes called “tycoons,” a much more positive word that came into English from Japanese, which itself borrowed the title, meaning “great prince,” from Chinese.

Tycoon is indeed a fitting name for Hamann’s X6 M-based Tycoon Evo M, a car that Americans would say has serious attitude. By virtue of its sheer presence, dominating performance and plush interior appointments, the Tycoon could lord it over almost any other vehicle it might encounter on a public highway. 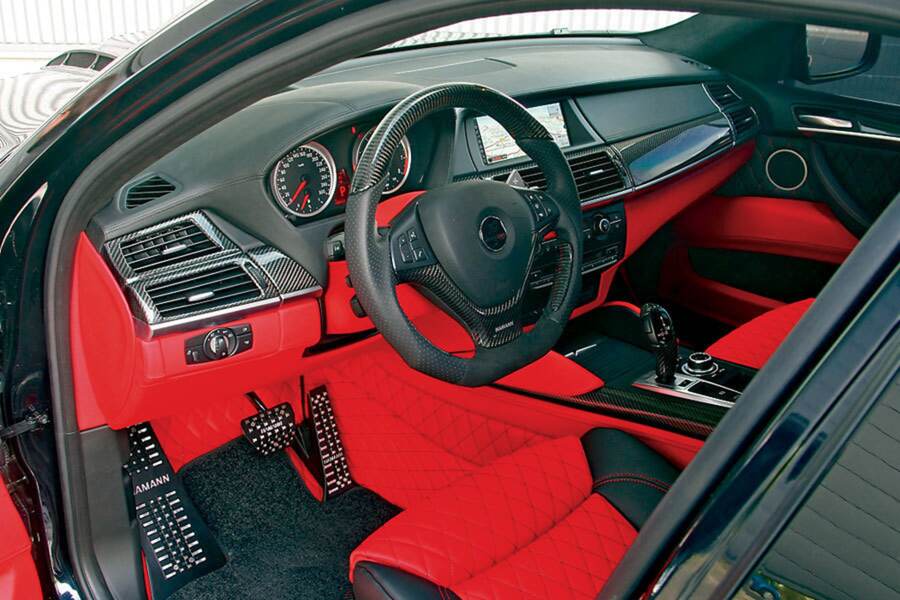 This particular Tycoon Evo M’s Russian owner, whose very successful business imports luxury designer brands into a neighboring country in the former Eastern Bloc, is not only a car enthusiast and longstanding Hamann customer, he’s also a big fan of the X6 M. In fact, he has two.

This time, however, he wanted a design statement as well as a car he could enjoy driving to work and play. Being in the fashion business, he had a lot of input into how he wanted this car to turn out.

One thing he did not want was a loud exterior color. In his world, dark exterior colors are best, and BMW M’s Carbon Black metallic is ideal. Carbon Black gives the Tycoon an undeniable menace even as it plays down the impact of the Hamann body styling kit. 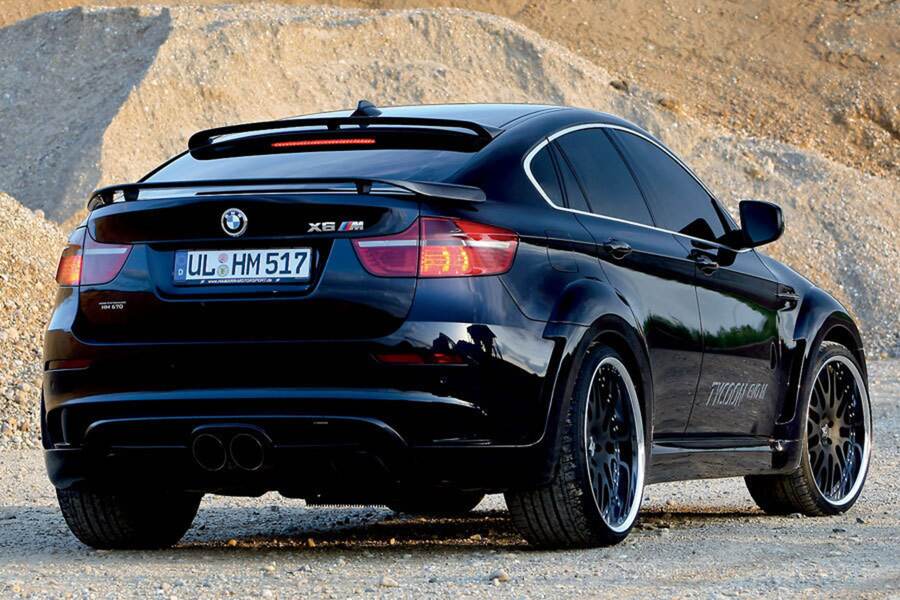 You’ll have to look carefully to notice the carbon fiber front and rear fender extensions that expand the car’s width by a good 2.4 inches, or the rooftop and tailgate spoilers or the side sills that connect the lower extremities of the front spoiler and rear valance. The latter has a mock diffuser underneath, but the real wow factor comes from its central cutout for the pair of truly massive 4.7-inch diameter exhaust outlets that replace the car’s standard quad pipe system. Finally, a beautifully made (and unpainted) carbon fiber hood saves weight at the nose, and it also adds vents on either side of its central power bulge to suck hot air from the hardworking turbochargers between the banks of the S63 V8 motor.

Following Audi’s lead, nearly every German tuner has latched onto the LED running light fad. On the Tycoon, Hamann effectively doubled up on the LEDs, adding a row of five at the top and bottom of the huge air intakes on either side of the front bumper/spoiler.

We have no idea how long the LED craze will last, but big wheels look like they’re here to stay thanks to the ever-increasing vehicle sizes that demand large wheels to maintain correct proportions. The X6 is so large that its 20-inch wheels look barely adequate, so Hamann evens the odds with its 11.0 and 12.0 × 23-inch lightweight forged alloy Race wheels fitted with 315/25ZR-23 Dunlop SP SportMaxx GT tires. 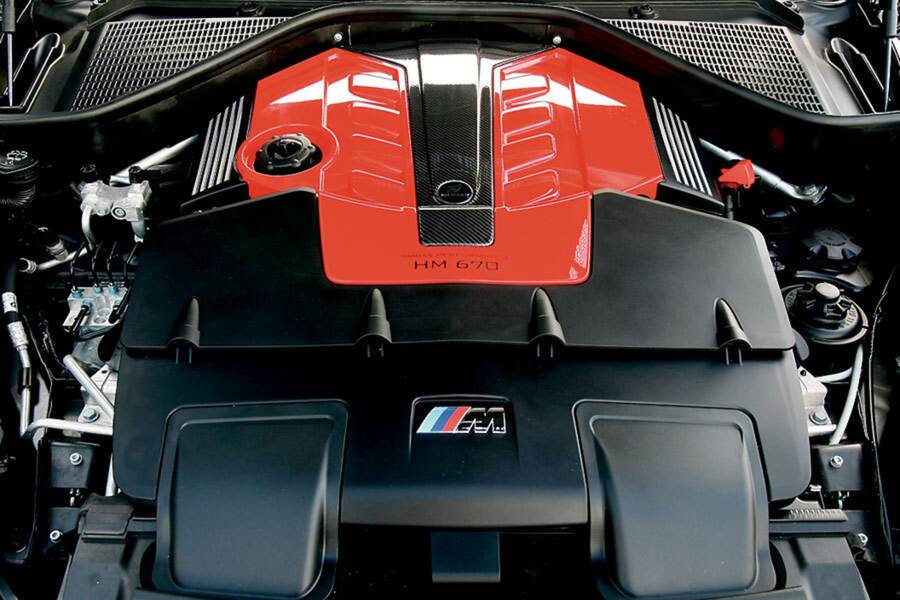 Behind the wheels, 12mm front and 19mm rear spacers push the wheels outward and increase track widths accordingly. This gives the car a squat, purposeful, slightly thuggish stance that is further enhanced by lowering it 1.6 inches via progressive springs in front and an ECU tweak for the rear air suspension. Suffice to say that this X6 won’t be going off-road!

This car’s owner wanted the Stage 2 conversion, however, which liberates 670 bhp and 627 lb-ft of torque. To achieve this output, the catalytic converters have to be removed and the ECU remapped to make full use of the lower backpressure. Thus, this conversion is for export only to non-EU countries where tight emission laws either do not exist or go unenforced. 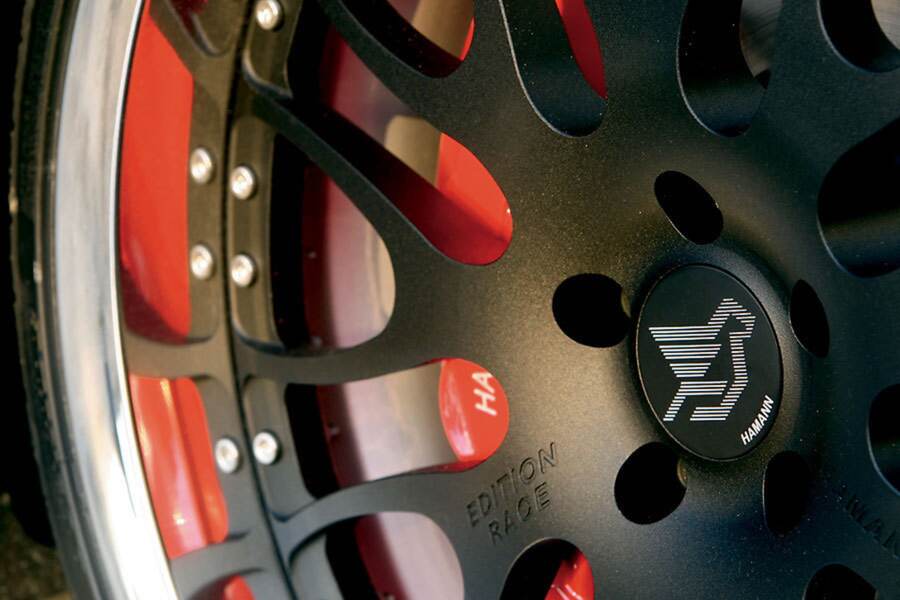 The lowered backpressure makes a huge difference not merely to output but also to the way the engine responds to your right foot. It is like going back to the days before catalytic converters were invented, when a tuned engine revved up so much faster because it could inhale and exhale freely.

Sound to match its fury

Best of all, the motor now sounds like it is breathing properly, too. Blip the throttle and the offbeat sound of the turbocharged V8 motor is amplified by quite a few decibels over stock. The firing pulses sound strange, like two four-cylinder motors connected but not in synch. Juiced to the nines and with a catalyst-free exhaust, the Hamann-modified S63 V8 sounds like four-fifths of a Viper V10, sans the throbbing overtone of that powerful, normally aspirated motor.

The performance is something else. The gearbox must be right on the edge with this amount of torque, but it seems to cope just fine if you treat the throttle with respect and accelerate progressively. 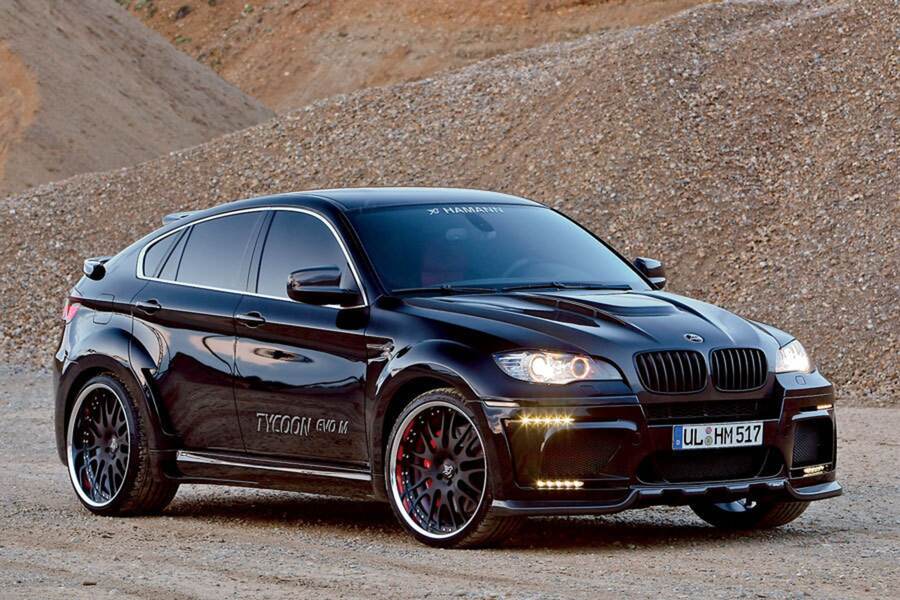 The massive wave of torque neutralizes the not-inconsiderable mass of the X6 M, hurling it down the road like a big Tonka toy. Glance at your plush surroundings while subjecting yourself to these g-forces and you just have to accept the irony of accelerating at supercar pace while sitting in an interior that resembles a gentleman’s club.

The red and black interior is simply amazing. The red quilted leather in the passenger compartment features black cross-stitching, while the black leather on the seats and door panels has red stitching. The inlays in the doors, center console, dashboard, gear lever and steering wheel are black carbon fiber.

The piece de resistance, however, has to be the “electric sky.” Where the Rolls-Royce Phantom Coupe has a “heaven” of stars created by white fiber optics whose intensity can be turned up or down, the Hamann Tycoon’s black Alcantara roof lining serves as the backdrop for a light show that features the Hamann logo in lights that change color every few seconds! It sounds ridiculous, but I soon warmed to its effusive charms, as it was just outrageous enough to tickle my fancy. 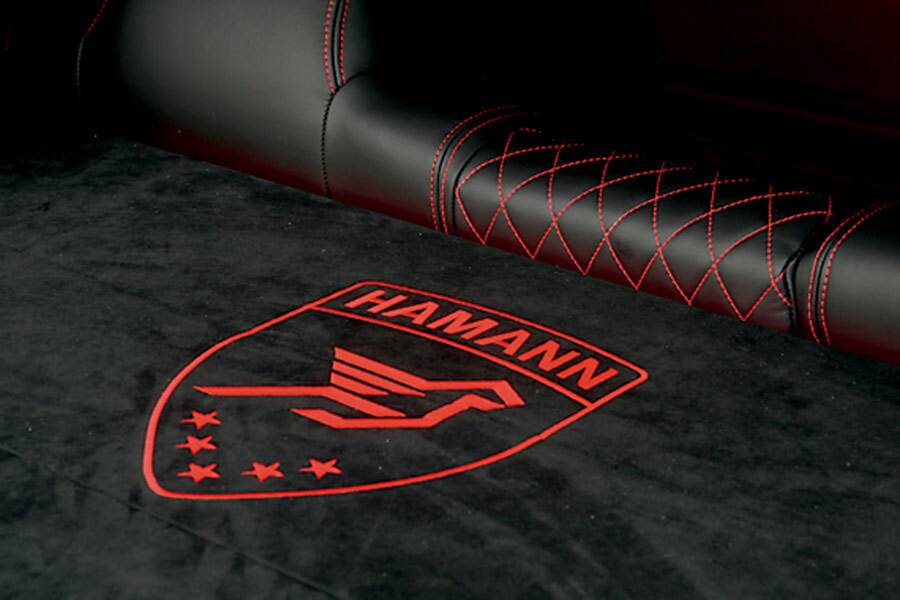 If you are going to do something outrageous, it is very important to do it well. I admit to being a sucker for quality, and when I examined the flawless carbon fiber bodywork and that perfectly crafted plush leather interior, I was totally won over.

That is what separates art from mere madness. The Hamann Tycoon Evo M may have been conceived in a moment of weakness, but as someone famously said, “It’s so bad, it’s good!” 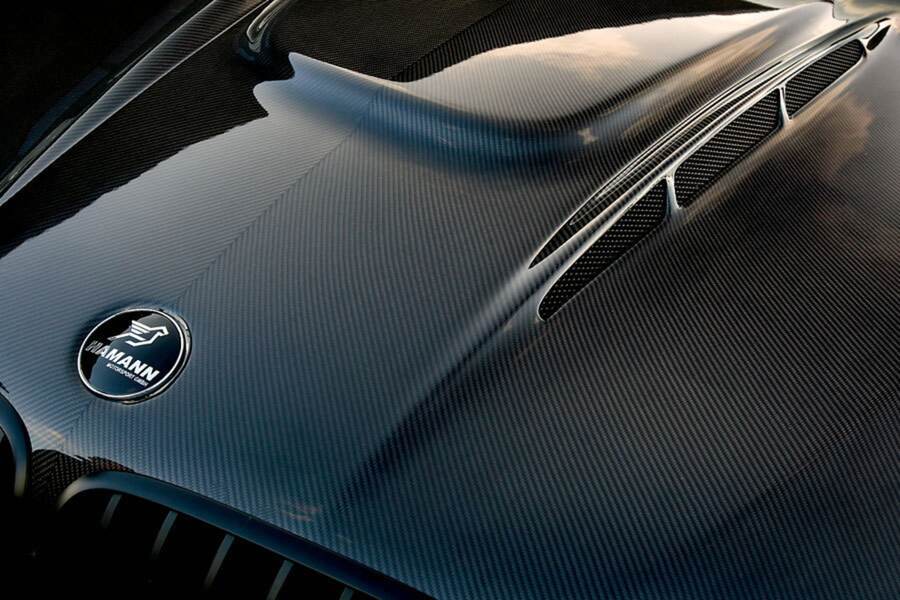 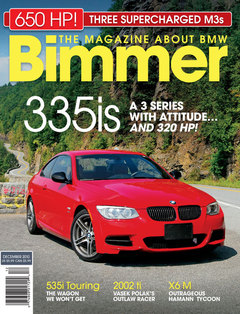