The latest supercharged M3 from VF Engineering and Vorsteiner may be styled upon a military theme, but it’s not exactly a stealth fighter. 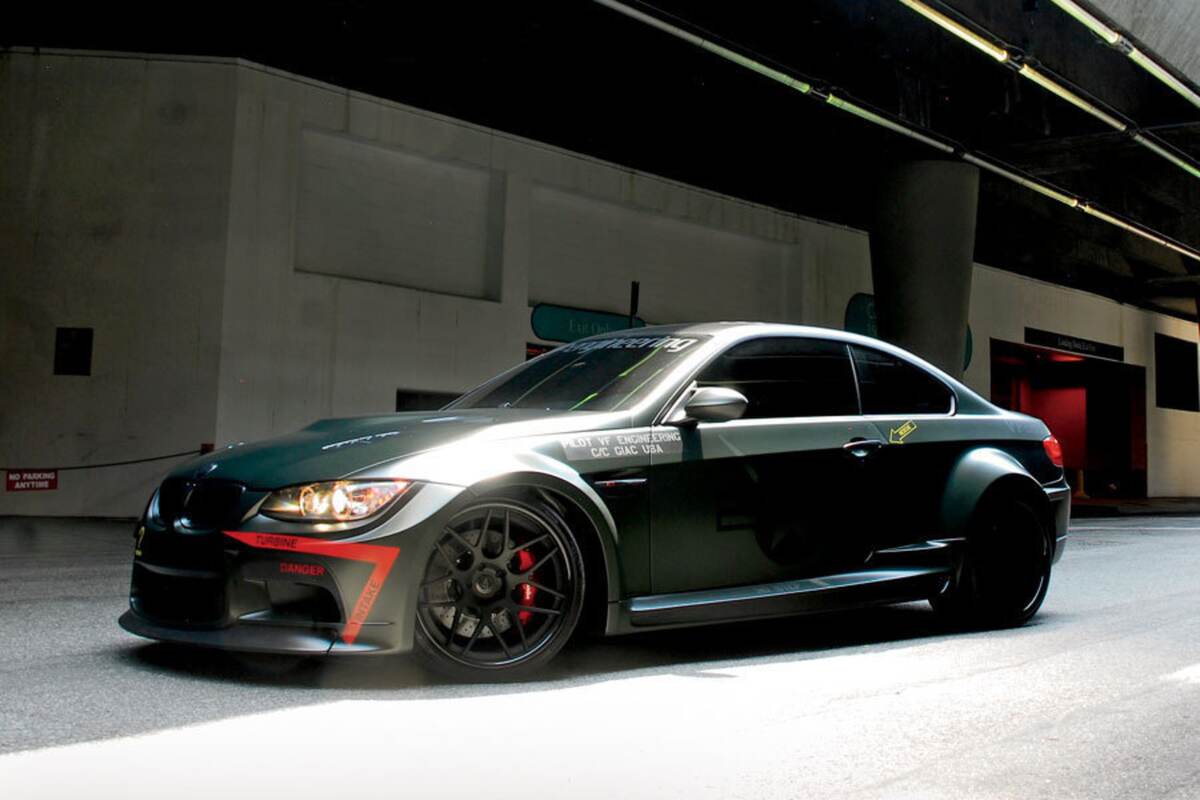 Like most cars from BMW tuning companies, this matte-finished widebody E92 M3 was built to garner as much attention as possible for its makers. After spending a few hours with this green beast in urban Los Angeles, I’d have to say that VF Engineering and Vorsteiner pretty much nailed it.

Not only did the BMW, called the GT3RS, draw stares of disbelief from other drivers and pedestrians, it also seemed to attract the laser-focused attention of every security guard and police officer in the vicinity. While shooting and driving the M3, we were questioned no fewer than four times about what we were doing. Hmmm…must have had something to do with the camouflage paint and the military insignias displayed prominently on the Bimmer’s flanks.

(Note to self: The next time you’re shooting a military-themed vehicle, choose a location a little less heavily patrolled than an airport perimeter.)

According to VF owner Nik Saran, the inspiration for this M3 came from a pair of different sources. First, Saran needed an appropriate showcase for the company’s new supercharger kit for the E9X-gen M3, whose launch coincided with VF’s 10th anniversary in 2010. 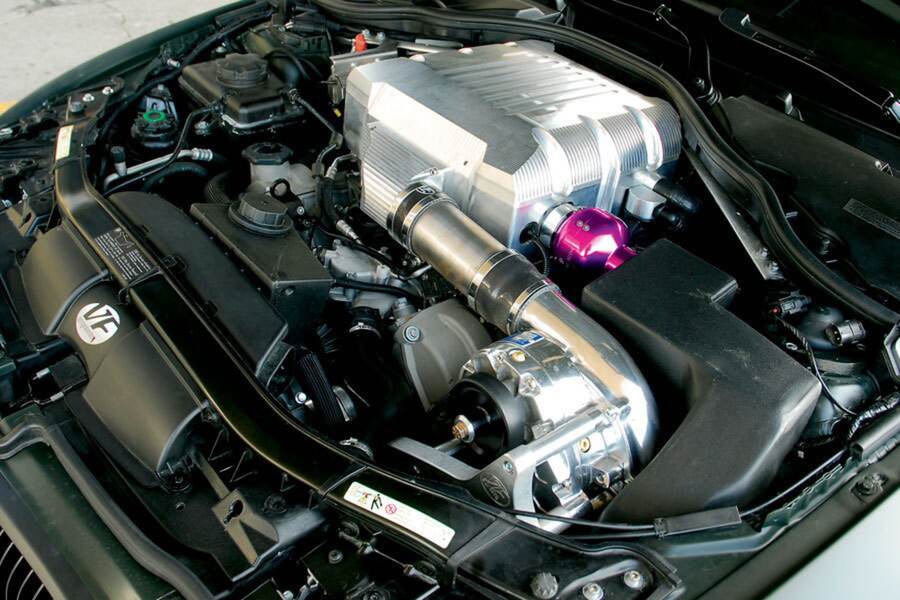 Secondly, Saran had noticed that a fair number of the company’s clients were employed with the U.S. military, and he thought a military-themed show car would be a nice tip of the hat.

“From our interaction with these individuals, we noticed that they all seemed to be no-nonsense people, and this is how we perceive our product,” Saran reveals.

Whether or not the car’s appearance can be described as “no-nonsense” would make for a lively discussion, but there is no denying that it’s one of the most dramatic looking cars I’ve seen in a while. Purchased in 2008, the M3 started as VF’s development mule for the forthcoming supercharger kit. Its first visual transformation involved a repaint in matte grey.

“A year later, it was time to reinvent the car,” Saran says, “and implement a U.S. Air Force paint and graphics scheme.” 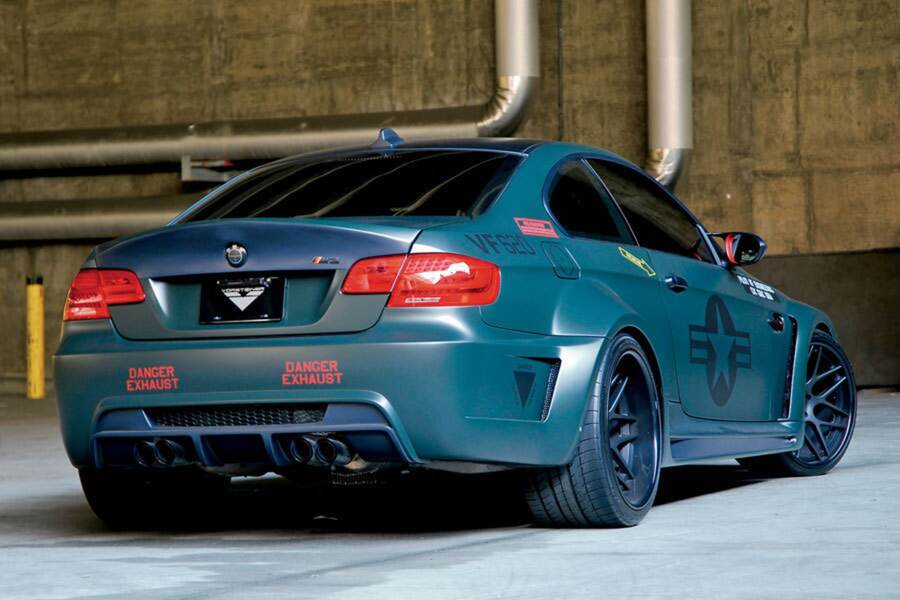 At the same time, VF fitted a body kit that gives the GT3RS over a foot of extra width. Designed and built by Southern California’s Vorsteiner in lightweight carbon fiber, the kit includes a custom front bumper whose splitter is replaceable should the low-riding GT3RS make contact with the road. It further swaps the stock M3 front fenders for entirely new fenders with integrated flares and grafts wheel arch extensions onto the existing rear quarter panels. Deep side skirts are bolted on along with a new rear bumper designed to match the curves and width of the rear flares while adding an integrated diffuser. A vented hood and lightweight rear trunk lid complete the aesthetic transformation.

While Vorsteiner designs and fabricates the parts, they were installed and painted by C&C Collision in Pasadena, California, the GT3RS body kit’s official installer. Only 100 examples will be produced, and the limited production run as well as the price—$25,000 or so—will give a certain level of exclusivity to owners of M3s so equipped.

Obviously, the increased width of the BMW necessitated the fitment of equally wide alloys, so Vorsteiner designed a new wheel to be used exclusively with the GT3RS kit. The V-308 wheels, available in 19-inch and 20-inch diameters as well as two- or three-piece designs, measure 10.5 inches wide up front and 12.5 inches wide at the rear. On the GT3RS I drove, the 20-inch versions were wrapped with Michelin Pilot Sport PS2 tires that measure 285/25-20 front and 325/25-20 rear.

To further the military theme, the M3’s flat green bodywork was also liberally adorned with the appropriate graphics. You know, the kind that all cars should have, like “No Step” (on the ginormous sideskirts) and “Danger, Turbine, Intake” in bright red on the left front corner of the car. 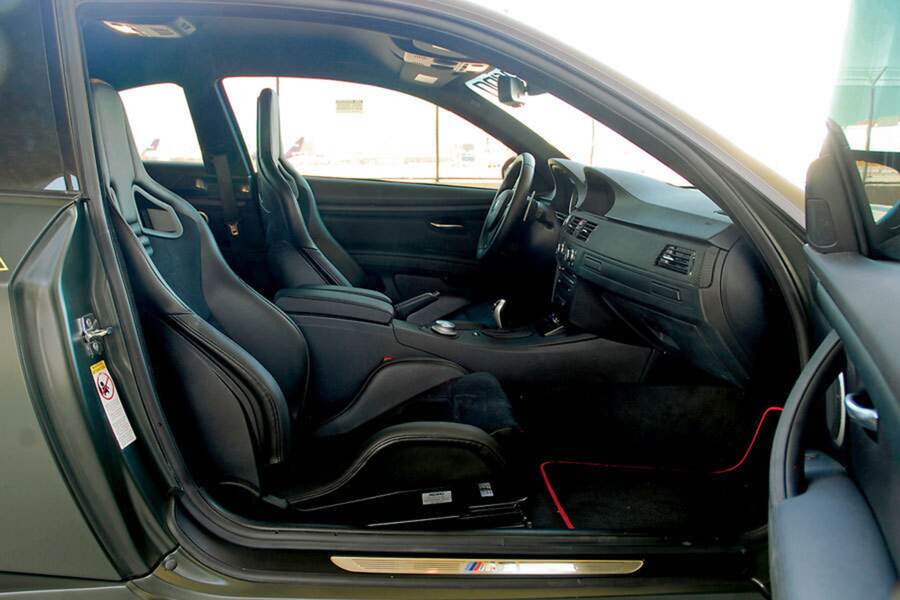 The mother of all manifolds

Of course, the most relevant and important graphic is the one that reads “VF 620,” referring to the claimed horsepower that the M3’s S65 V8 makes thanks to the supercharger lurking under the green hood.

Popping open that hood, we’re greeted by the mother of all M3 intake manifolds, fabricated from a solid piece of aluminum. Comprised of a bottom tray and a lid, the airbox holds eight 2.25-inch intake trumpets, one for each of the S65 V8’s cylinders, machined right into the structure of the airbox. Though this is the same setup that the factory M3 airbox uses, it’s a whole lot cooler knowing the intakes are machined from billet aluminum rather than molded in plastic. The airbox is designed to accept either a blow-off valve that evacuates externally for a distinctive sound or a recirculating valve that noiselessly sends excess pressure back into the intake manifold.

The setup centers around a Vortech V-3 Si-trim supercharger that bolts to the M3’s engine bay with an aluminum bracket. The Vortech unit receives air through VF’s own intake tract and a free-breathing K&N filter.

To keep up with the additional air that the supercharger forces into the engine, VF swaps the Original BMW fuel injectors for higher-capacity Bosch injectors that use the same fuel spray pattern as stock. The engine is kept cool by a higher-capacity Bosch water pump that relies on its own plastic reservoir. To ensure that the M3’s computer remains a happy camper, VF worked with GIAC to create custom software. 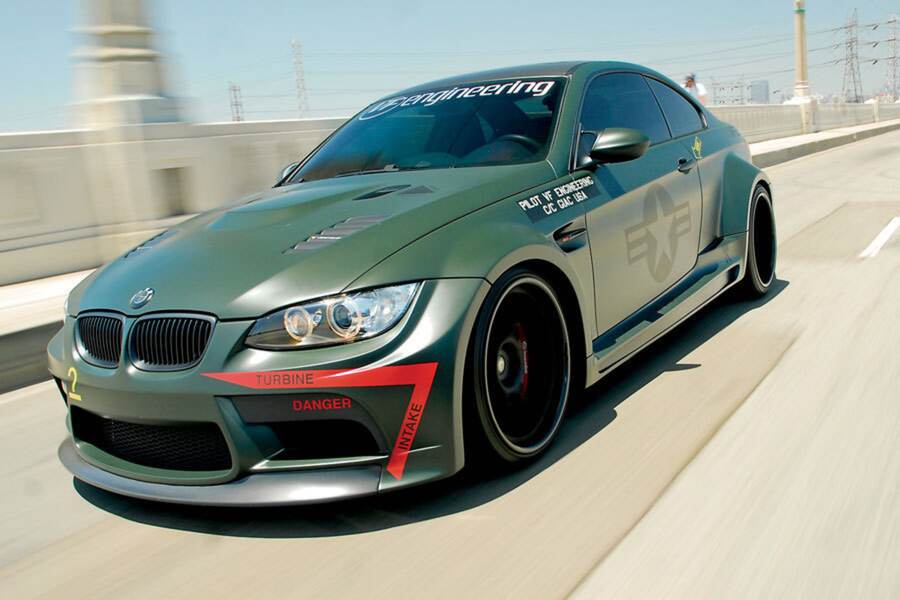 That’s a lot, but the VF car remains easy to drive. The added power of the supercharger comes on strong enough in the midrange that you can short-shift the slick and quick DCT gearbox and still make seriously quick progress. Keep the gas pedal buried and the M3 becomes searingly fast, the engine producing smooth, forceful acceleration all the way to 8,000 rpm.

Thanks to a Tial recirculation valve that re-routes excess boost pressure back into the intake tract, the supercharger displays no histrionics when lifting off of the throttle for an upshift or deceleration. And what little noise the blower makes as it spins up is buried by the aggressive howl dumping from the exhaust system, here a Vorseiner VTS titanium setup. The exhaust opens up the S65 V8’s voice, producing a deep, attention-getting rumble at low engine speeds and a satisfying howl at higher rpm.

Most importantly, the added torque provided by the supercharger addresses one of the few areas for which the latest M3 has been criticized, which is that its S65 engine is undeniably powerful but also peaky. Combine that with a portly 3,704-lb. curb weight and the result is an M3 that feels less responsive than its predecessors from a dead stop or at low rpm.

Not so the VF car. Those 410 lb-ft of torque give the car far more immediate response, and while that’s welcome I felt like the throttle itself was slightly jerky, with an on/off feel. It was certainly nothing that got in the way of driving, especially when I was doing so in an aggressive manner, but it was a minor annoyance when driving from stoplight to stoplight in stop-and-go traffic.

Fortunately, other improvements compensate, like the Recaro Sportster CS seats that are not only cool looking but are actually pretty comfortable. So, too, are the fully adjustable KW Variant 3 coilovers that replace the stock suspension. This is a great street setup, providing a smooth ride with a big improvement in handling. And given the width added to the M3’s track, it’s not surprising that stability is massive and grip, at least on public streets, seemingly limitless. Though I wouldn’t describe the car as chuckable thanks to that massive 325-section rear contact patch and incredibly wide stance, it handles extremely well. I also appreciated the ubiquitious Brembo big brake kit that rounds out the chassis changes. The kit used here consists of monoblock calipers—six-piston front, four-piston rear—that clamp 365mm and 345mm cross-drilled rotors to ensure that the GT3RS stops as well as it goes and corners.

VF Engineering’s fighter jet-inspired M3 might have some folks shaking their heads, but there’s no denying that it brings bucketloads of attention to VF and Vorsteiner, exactly as intended. 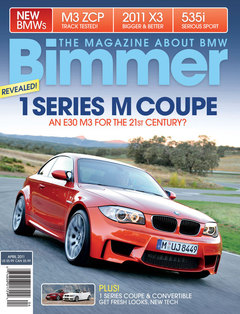