Unleashing the power of the N54 six, Dinan brings 335i Coupe performance into M3 territory. 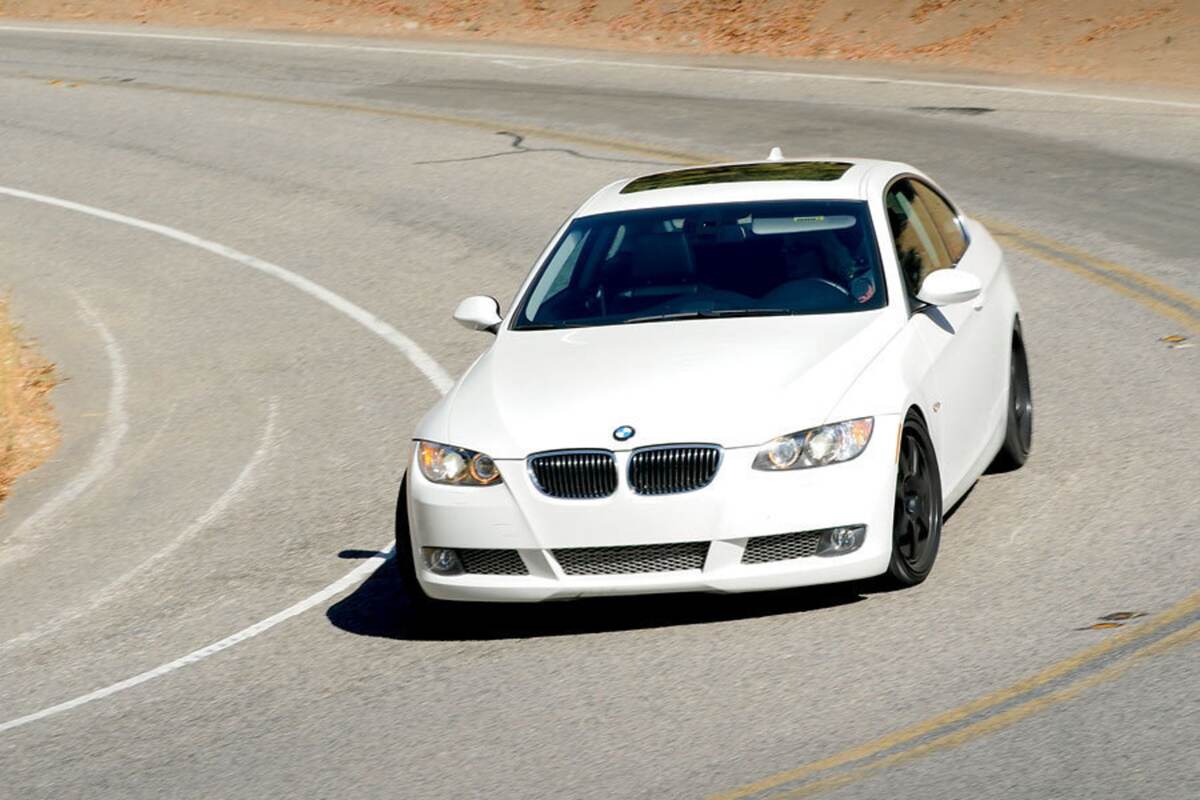 With their unique ability to deliver both strong performance and CAFE-pleasing fuel economy, turbocharged engines have established themselves as the foundation of the BMW lineup. If you’re hoping that the normally aspirated engine makes a comeback at BMW, you’re going to be disappointed. It’s just not going to happen.

Fortunately, BMW can turn out some great turbocharged engines. And as good as they are in stock form, those engines also allow tuners to extract more power with relative ease, bringing us cars like the Dinan S3-335i Coupe you see here.

Dinan’s engine software is the core of the S3 package for the 335i, with the remainder of the Dinan components enhancing and supporting the added power. The software upgrade makes more power by increasing turbo boost from the stock 8.8 psi to 14 psi while retuning the fuel mixture, ignition timing and rescaling the full map. The software changes also remove the top speed limiter and remap water pump speeds to keep operating temperatures under control as turbo boost increases. Together, the mods add 60 hp and 73 lb-ft of torque to the N54’s output. 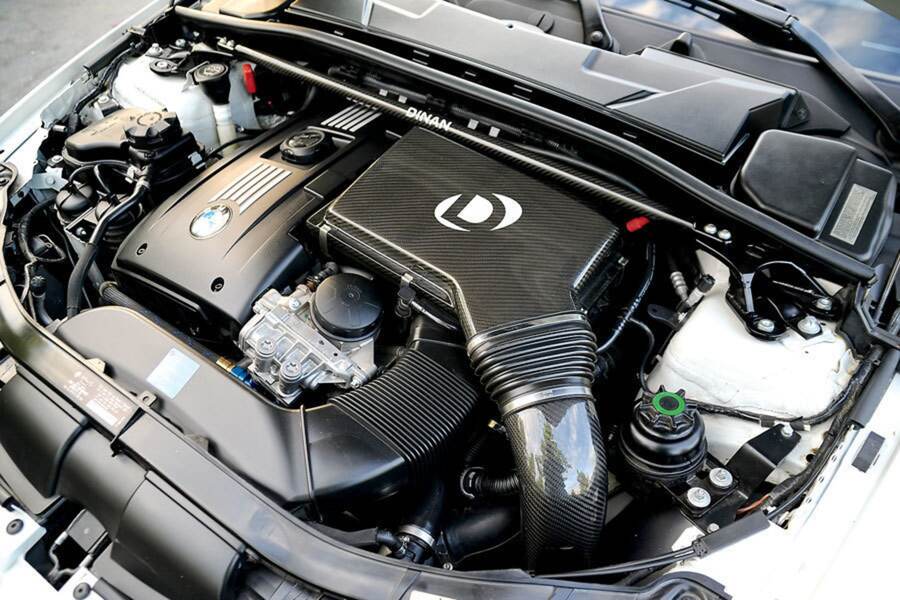 Our test car was equipped with Dinan’s complete Stage 3 (S3) package, which combines the software upgrade with a larger intercooler and oil cooler, a free-flow stainless steel exhaust and a cold air intake to deliver an even more substantial power increase: 108 hp and 140 lb-ft of torque, bringing total output from the stock engine’s 300 hp and 300 lb-ft to the Dinan S3’s 408 hp and 440 lb-ft. That’s nearly as much horsepower and a lot more torque than the current M3’s S65 V8 generates (414 hp, 295 lb-ft), and the torque figure is almost as high as the turbocharged N63 V8 produces in the 550i. No wonder Dinan has sold more than 3,200 of these software upgrades for N54-engined BMWs!

Adding horsepower to a turbocharged engine is relatively easy compared to trying to do so on a normally aspirated engine, but producing reliable power gains and maintaining drivability is much tougher. Increasing turbo boost means increasing heat, making the oil cooler key to reliability in the S3 engine package. The Dinan cooler has twice the capacity of the stock unit, plus ducting that directs more outside air through it. Since the N54’s factory oil cooler has had overheating issues, this product is probably worth checking into even if you have a completely stock BMW with an N54 or N55 engine and plan to drive it hard or take it to track events.

The upgraded coolers are undoubtedly some of the most important of Dinan’s upgrades to the S3-335i, but they’re not the kind of modifications you can admire when the hood is popped open. In the spirit of American hot rodding, it’s sweet to have visual upgrades, as well, and the Dinan cold air intake fits the bill on this car. It’s beautifully made from carbon fiber and looks fantastic under the hood. With tubing that pulls air straight from the grill opening while isolating that cool air from the hotter air under the hood, it also works, reducing intake air temperature by around 40°F compared to the stock intake. 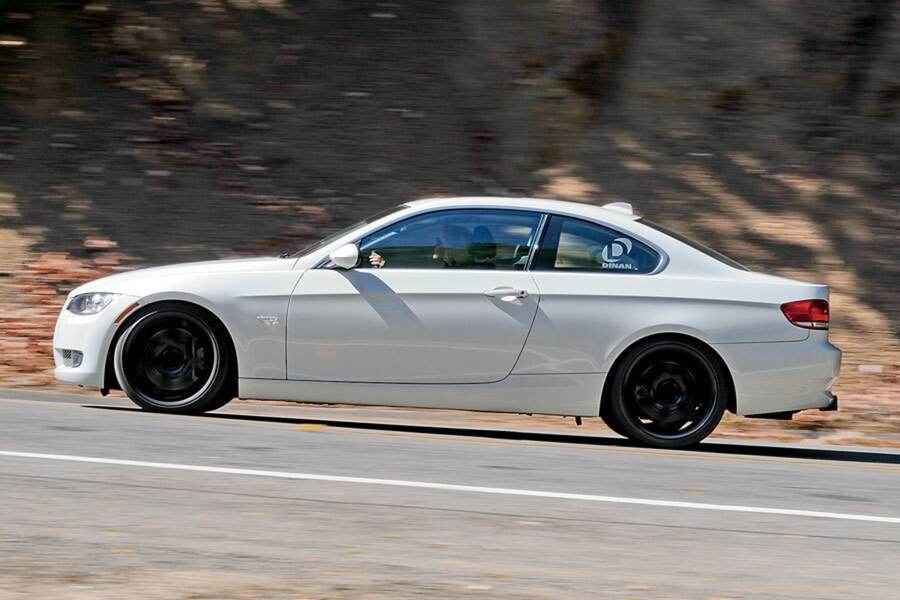 To handle the increased stresses that come with more power, Dinan upgraded the suspension components while creating the Dinan S3-335i. As the company does with its engine software packages, Dinan offers its suspension modifications for the 335i in three stages. The S3-335i’s Stage 3 package includes upgraded springs, shocks and struts that are custom-made by Koni to Dinan’s damping rates and bump stop specifications, plus tubular anti-roll bars that measure 26.5mm in diameter up front (same as the solid stock bar) and 15.8mm at the rear (up from 13mm).

For putting the power down to the road, the Dinan S3-335i wears Michelin Pilot Sport 2 tires sized 265/30-19 and 275/30-19 on wheels that measure 9 × 19 in front and 9.5 × 19 at the rear. Those sizes represent a big increase in both diameter and width over the stock 8.0 × 17-inch wheels, and they give a wider contact patch than BMW’s optional 8.0 × 19-inch front/9.0 × 19-inch rear wheels shod with 225/35 front and 255/30 rear tires. Most importantly, Dinan’s more-equal tire widths front to rear confer more neutral handling with less understeer. Larger wheels often result in more unsprung weight, but Dinan produces its forged aluminum wheels to be as light as possible: They check in at around 20 lbs. apiece—some 7-8 lbs. lighter than the BMW-optional Style 230 19s. 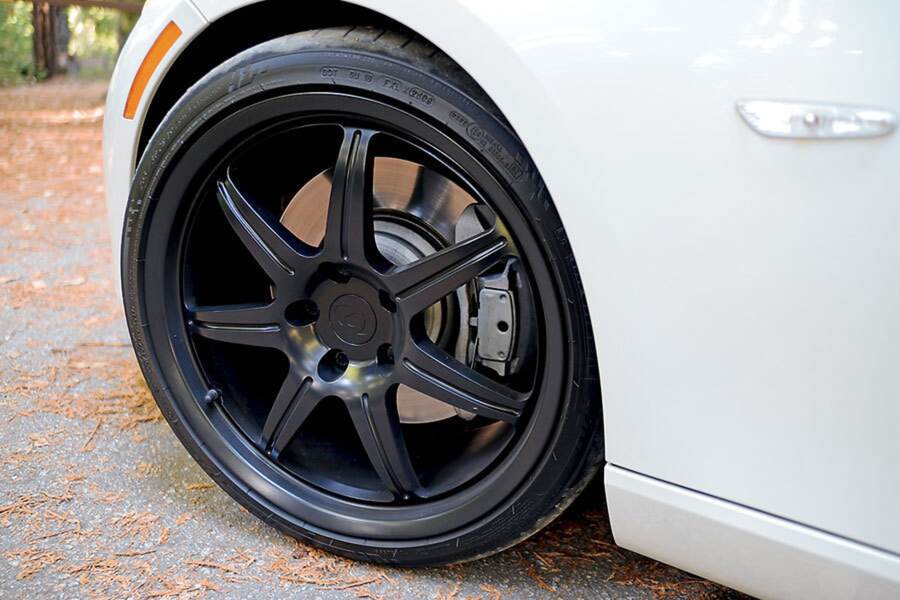 Our car was also equipped with Dinan’s torque-sensing limited slip differential to make sure power gets to both rear wheels instead of just one, but it didn’t have Dinan’s Brembo big-brake kit and made do with the stock components instead. Inside, aluminum pedals and Dinan floor mats complete the modifications.

Dinan BMWs are usually stealthy in appearance, and the S3-335i we drove was no exception. Although its black wheels and exhaust tips give it a menacing appearance, nothing shouts out that this car is much different than a stock 335i Coupe with the M Sport Package. True enthusiasts will recognize it by the Dinan trunk badge, of course, which you can’t just buy and stick on. It has to be earned.

The S3-335i remains stealthy when you twist the key and bring the engine to life, its exhaust having been designed to be nearly as quiet as stock at low engine speeds. When driven sedately, it doesn’t feel or sound much different than a stock 335i Coupe. 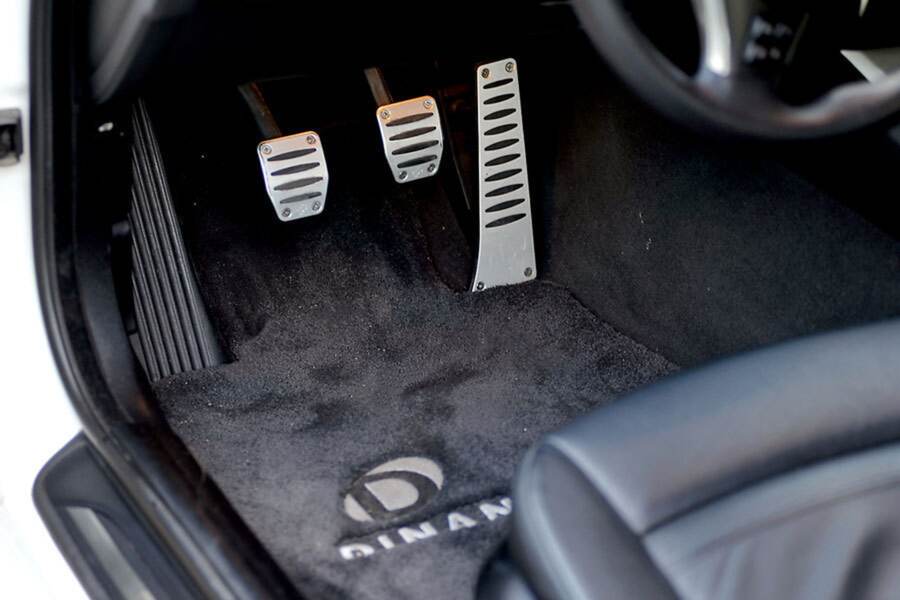 That all changes when we leave Dinan’s hometown of Morgan Hill, CA and nail the throttle on the entrance ramp to Interstate 101. The exhaust note that was so docile around town becomes full-bodied and aggressive as the revs climb, though it never gets annoying at highway cruising speeds. The deep well of torque that propels the car forward with such urgency provides immediate evidence of Dinan’s tuning work, and the car feels M3-fast when zipping around slower traffic on the freeway.

As great as the S3-335i is for devouring miles on the interstates, we have some other roads in mind, specifically the great driving roads of the Santa Cruz Mountains. On these twisty roads, the most noticeable difference between the S3-335i and stock 335i Coupe is the immediacy with which the car turns into corners. The reduced understeer also makes the S3-335i feel much more responsive and alive than the stock car.

Falling in behind a group of skilled Miata enthusiasts (identifiable as such by their aftermarket roll bars) on the way to Big Basin Redwoods State Park, we hang with them on narrow, undulating Route 236 even though the road is much better suited to a small and light Miata than a 3,571-lb. luxury coupe. 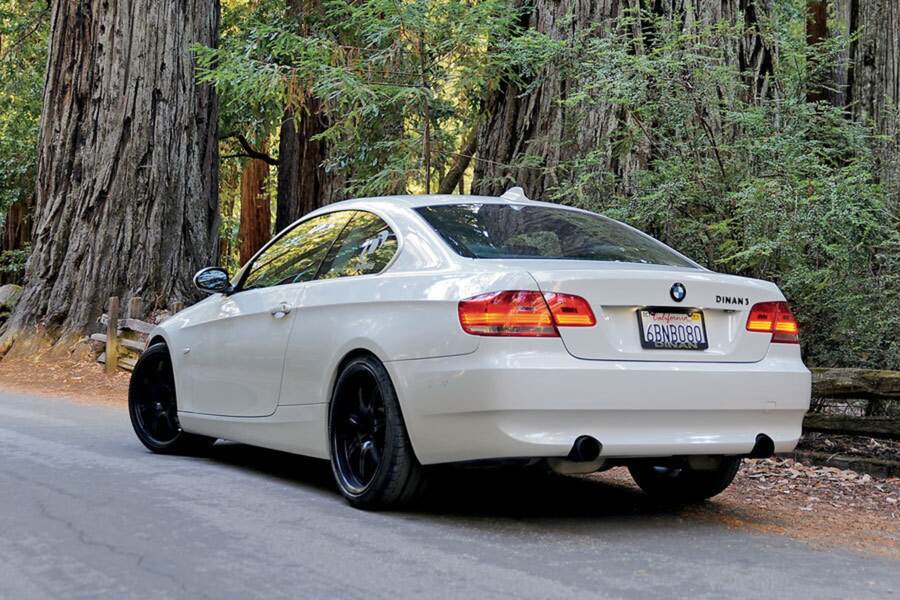 Along with the sharper steering and quicker directional changes, the Dinan suspension and roll bar changes result in reduced body roll, which gives more confidence to dip into the ample torque on hand. And even though body movement is well controlled, the suspension remains supple enough to soak up these mountain roads’ many imperfections, particularly where erosion has washed away the edges of the asphalt or caused it to collapse from underneath.

Careful tuning of not only the shocks and springs but also the bump stops and spring perches allows for increased travel without bottoming, and even on its lowered suspension the Dinan S3-335i remains composed and responsive. The compliant suspension gives Dinan’s limited-slip diff and Michelin tires an effective partner for putting down the power while exiting bumpy curves, maintaining the full contact patch where other cars feel ragged or unnerved.

As much as we liked the S3-335i, we never really got the feeling that it would outrun a stock M3 on the same roads, though to be fair we didn’t have an M3 against which to compare it. The Dinan car had sharper turn-in and more responsive handling than a stock 335i, but it didn’t feel as if the steering was giving as much feedback as an M3 from initial turn-in to corner exit. Some of this could be due to the M3’s more extensive use of aluminum rather than heavier steel for front-end hardware, which allows the wheels and suspension to respond more quickly and freely.

Its seats may also have compromised some of the Dinan S3-335i’s full capabilities. When Steve Dinan ordered this 335i Coupe from the dealer, he did so without Sport Package since he planned to swap out the suspension and wheels anyway. Problem is, he never replaced the standard seats, and while the car’s grip levels have been improved dramatically, the stock leather seats haven’t improved to match. They don’t provide much lateral support, and we always felt like we were sliding around too much to get an accurate feel for the car’s handling. The first thing we would do if we bought this car would be to install BMW’s 3 Series Sport seats or, better yet, the grippy cloth seats from the M3.

Even if we had to buy new seats, the car would still be a cost-effective proposition for those in search of M3 performance without the M badge on the trunk. Though a new Dinan S3-335i would have fetched roughly the same price as a new M3 Coupe in 2010, an N54-powered 335i Coupe can now be purchased used and sent to Dinan for a lot less. (The parts on our test car retail for right around $20,000.) The result will still be a car with M3-level horsepower and a lot more torque, the latter of which may provide a more tangible benefit in normal daily driving. The S3-335i is also more stealthy and frugal than the M3, and it excels as a daily driver since it’s still right at home hauling four adults and a trunk full of luggage. When it’s just you and and a great mountain road, however, it has enough added performance to make things interesting.

Of course, you can also enjoy the benefit of Dinan’s products without going for the full-boat S3 package. Dinan offers its “Signature” performance packages in three stages for both software and suspension (S1, S2 and S3), but all of the parts can also be purchased separately. As stand-alone products, we especially liked the larger oil cooler, the more vocal but driver-friendly exhaust and the beautiful carbon fiber cold air intake.

Dinan is working on similar upgrades for the newer N55-engined models and expects power gains to be similar to those on the N54, though the engineers won’t know for sure until development progresses further. Whether there’s an N54 or an N55 under the hood, however, turbos are here to stay, and we look forward to seeing what tuners like Dinan can do with these cars over the next few years. 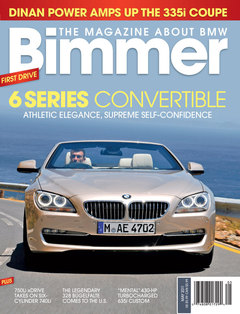