When he found it languishing in a trailer park, Hamik Hartounian thought this old 2002 would make a cheap daily driver. One year later, he’d built it into an S14-powered garage queen. 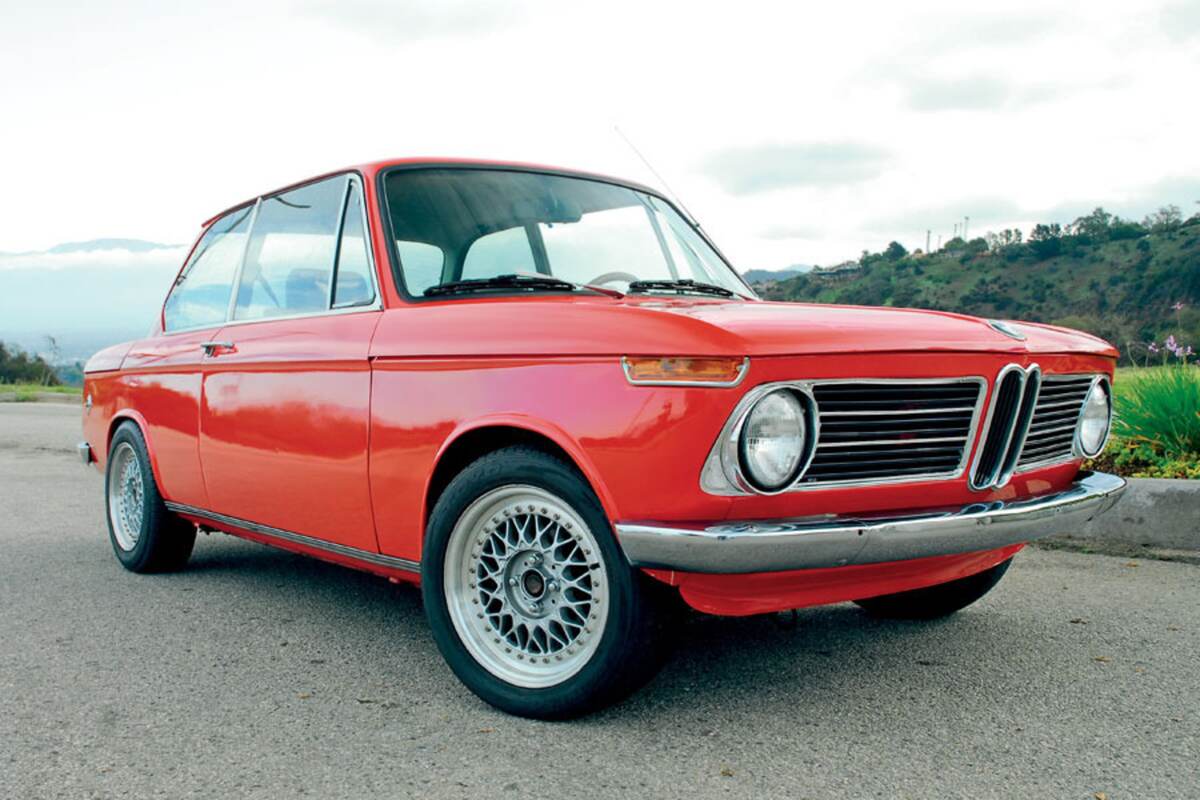 Along with a monumentally effective way to waste time and avoid working, the internet has given us Craigslist, the largest flea market/yard sale/used car lot ever created and brought to your computer screen. Among enthusiasts, Craigslist has become one of the most popular venues for buying and selling vehicles of every description, from vintage America muscle cars to—as in Hamik Hartounian’s case—budget classic BMWs.

When Hartounian’s daily-driver E30 325e expired in a cloud of coolant and oil, having fallen victim to overheating after one too many miles on busy L.A. freeways, he needed a replacement immediately. Being a devoted Bimmerhead, Hartounian naturally leaned towards replacing the E30 with a similar classic. After all, that 325e had served him well for seven years, and his brother Rubik for many years prior.

“He took really good care of it and handed it down to me in 1998,” explains Hartounian, who rebuilt the M20 engine himself during the course of his ownership. “More importantly, this car was what started it all for me.”

“It” being an ongoing fascination with BMW cars, of course. While using his hand-me-down 325e as a daily driver, Hartounian had also acquired a pristine and original E30 M3, but no way was that little prize going to be pressed into service as a commuter.

“I needed another car to take to work,” he says, explaining how he found himself browsing Craigslist. 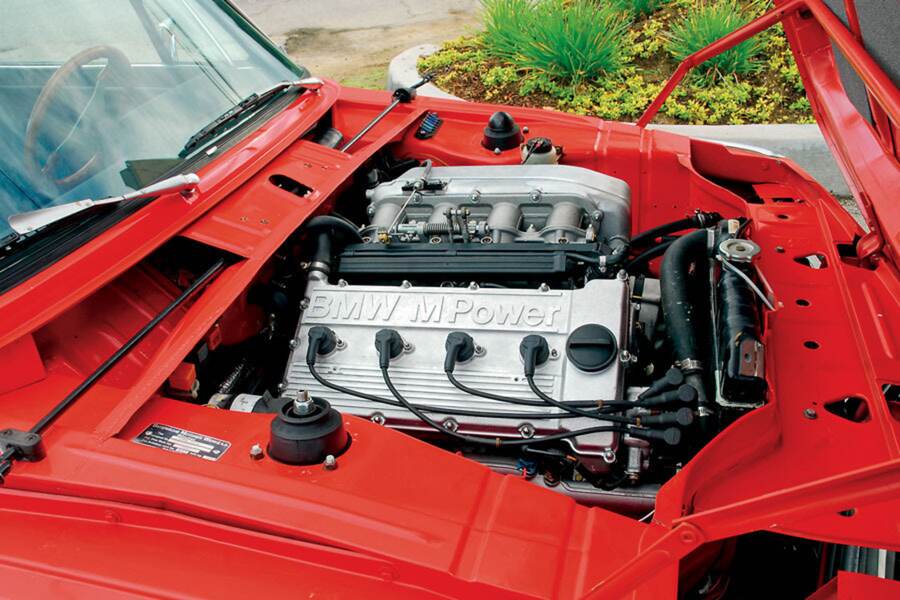 Sure enough, a scan of local BMWs turned up a potential candidate in the form of a 2002 being offered for $1,000 in nearby Culver City. A 1973 model, it had the desirable round taillights and chrome bumpers rather than the square lights and diving board protuberances that adorned later U.S.-spec 2002s, but it had clearly seen better days.

Stashed in a trailer park, it wouldn’t even start when Hartounian arrived to see it. Turning the key produced nothing but the jangle of a starter valiantly but futilely trying to bring the old engine to life. On the plus side, the 2002 exhibited little rust, which is rare indeed on a BMW that’s pushing 40.

Rather than be deterred by a 2002 that seemed dead in the water, Hartounian saw the car’s non-op status as a bargaining chip, like any money-smart gearhead.

“I told the seller I would drive the car out of his driveway if he sold it to me for $400,” Hartounian recalls.

The seller agreed, so Hartounian made a quick trip to a nearby auto parts store to purchase a new battery and some fuel line. After installing the new battery, replacing some dangerously dried and cracked fuel lines and putting the spark plug wires into the correct order, Hartounian cranked the starter again, et voila! The 2002’s engine coughed and turned over, and Hartounian had himself a complete and driveable vintage 2002. He ran out of gas twice on the way home because of a faulty fuel level sensor, but otherwise the ’02 was solid. 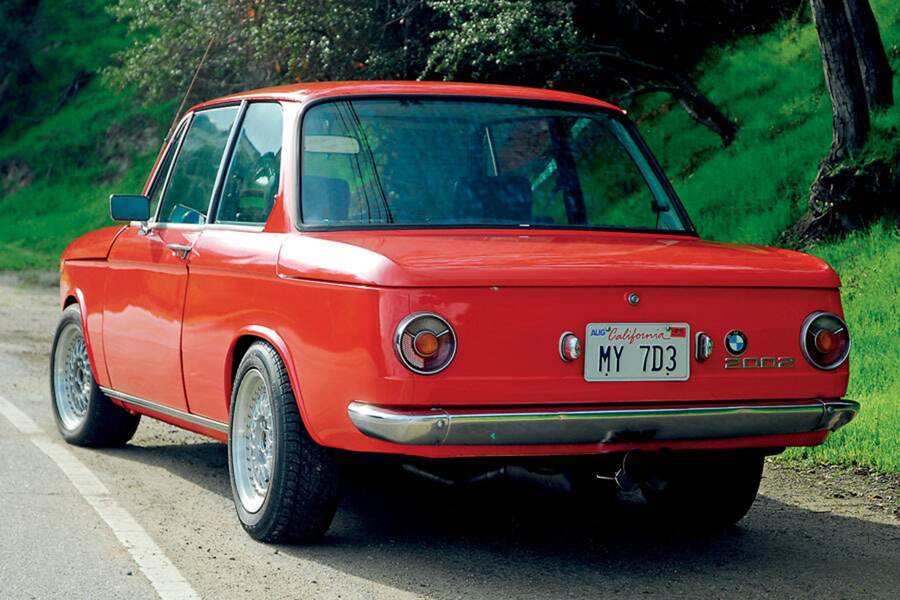 Initially, Hartounian planned to make the minimum infusion of cash that would get the 2002 running reliably for the drive it to and from work. That changed dramatically when he stumbled across an S14 four-cylinder engine whose seller had driven his E30 M3 into a lake in the middle of winter and was parting out what remained.

The engine had a blown head gasket and leaked oil out of pretty much every orifice. Even though it needed a full rebuild Hartounian was struck by the idea of installing such a powerful, modern four-cylinder in the 2002’s lightweight chassis.

Having already rebuilt his 325e’s engine, Hartounian knew he was skilled enough to tackle the S14 four. Suddenly, his plan took a 180-degree turn, morphing from cheap daily driver to full-on project car.

The engine was located in Seattle, but rather than spending $600 to have the engine shipped to SoCal Hartounian took a road trip to the Pacific Northwest and picked it up himself. Back at home, he dumped the engine onto a large piece of plywood and proceeded to disassemble it, using the plywood itself as a gigantic note pad. Soon, the board was covered in engine parts, oil and arcane scribbles pertaining to the engine’s order of assembly—or rather its disassembly.

Once the block, engine internals and cylinder head had been cleaned and machined, Hartounian assembled the S14 with new gaskets and rings. The engine was then bolted into the chassis with custom urethane motor mounts from Ireland Engineering and mated to a five-speed Getrag 265 gearbox sourced from an E30 M3. 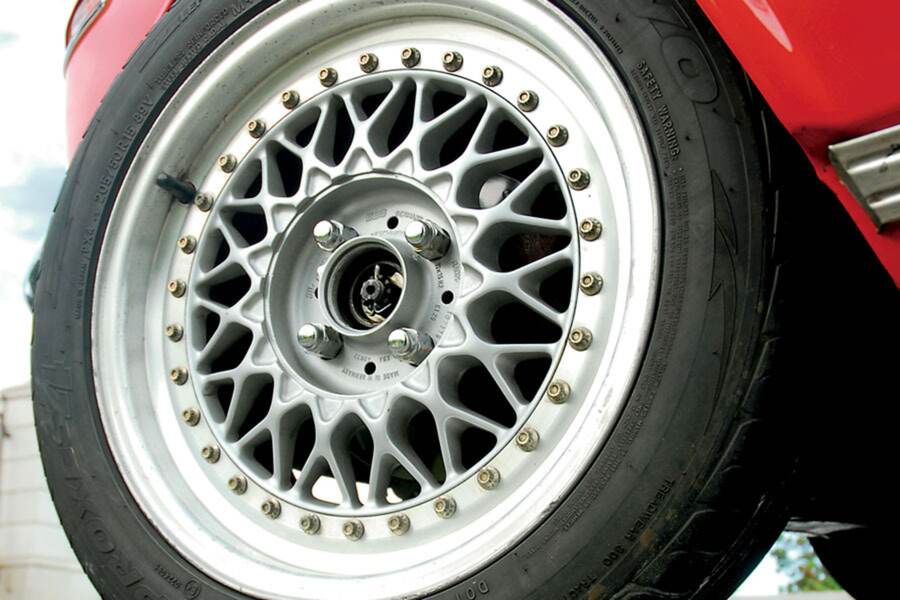 “The tunnel for the gearbox had to be cut and moved back a couple of inches,” Hartounian says. That in turn left a gap between the tunnel and the firewall, which was filled in with metal plate. On installation, the gearbox was converted to work with the 2002’s original mechanical tachometer cable rather than the E30 M3’s electronic setup.

In order to keep the high-revving S14’s lubricants sufficiently cool, an oil cooler from an E30 325is was mounted behind the front grille. A 320i radiator with custom coolant piping and an electric fan further aid engine cooling.

Hartounian tells us that the S14 rebuild turned out to be more complicated and involved than the same job on the M20 six-cylinder, though not beyond his abilities. The only job that he didn’t handle himself involved wiring the S14’s electrics to work in the 2002. For that, he enlisted the help of a friend with far more experience.

“I couldn’t have done this without my friend Richard,” he admits. “We had a little trouble getting it started, but wow, how rewarding it is when the car comes to life.”

By far the most intensive aspect of the build was the bodywork, which Hartounian tackled himself over the course of eight months. In preparation, he turned his garage into a makeshift body shop/paint booth. 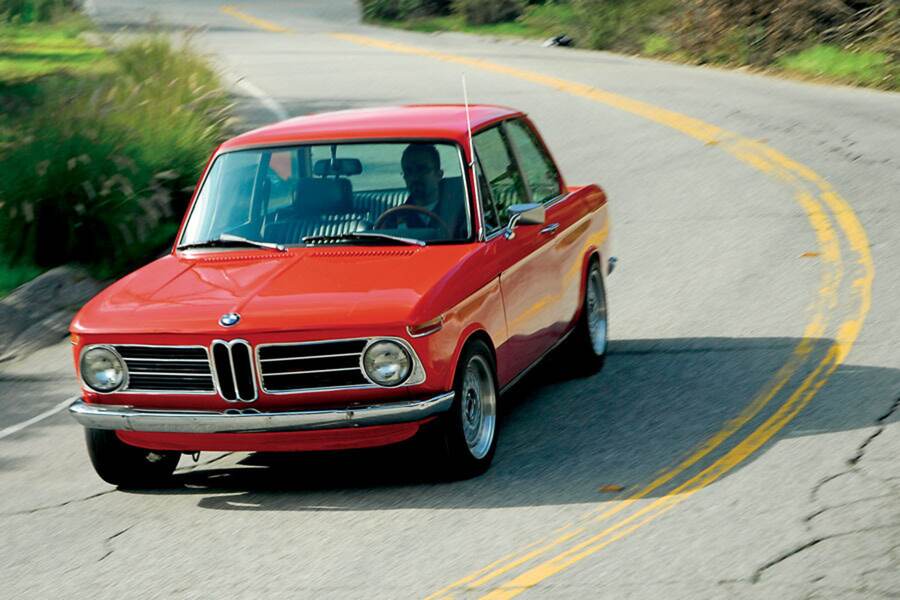 “I totally modified the garage and spent a load buying filters and fans to filter out dust,” he says.

Before he could spray any paint, the body needed to be stripped. Two gallons of caustic aircraft paint stripper later, the BMW was down to bare metal, inside and out.

“The interior metal panels had surface rust in some areas,” he says, “so I bought a sand blaster, tore everything out and blasted it clean.”

When that process uncovered some rust holes in the rocker panels, Hartounian bought a spot welder and taught himself how to use it. After he’d repaired the panels, he coated the entire car in rust preventive primer and got ready to paint.

“Paint application was the most stressful part,” he admits. “I spent several weeks just getting info from different paint shops and painters and their specific technique for the best application given my situation.” 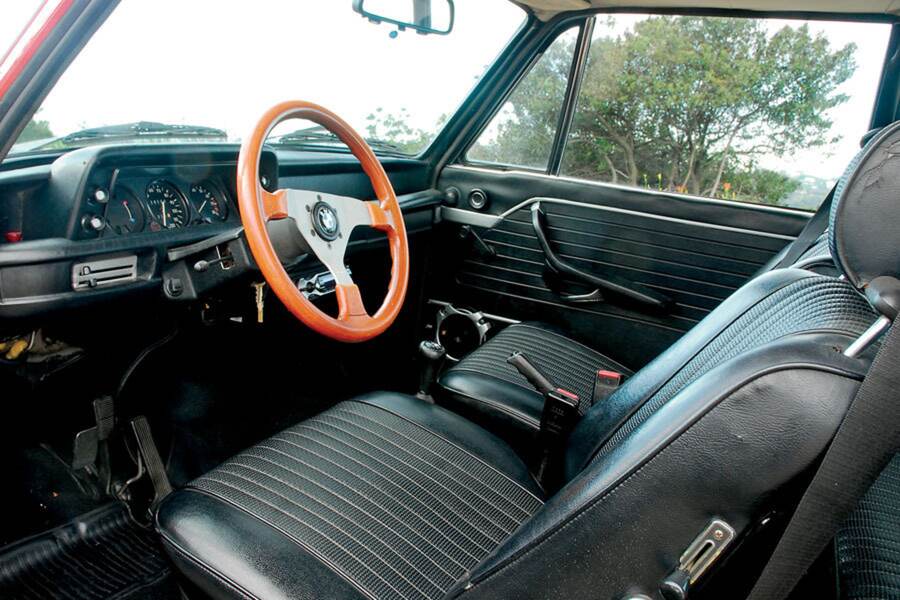 “Applying the base coat was very interesting, because it didn’t even look like Henna until I applied the clear,” he adds. “The orange comes out and the brilliance is sweet.”

Once the BMW’s fresh paint had time to cure, the body was carefully reassembled with the original chrome brightwork.

With the exception of the M3 motor and gearbox, Hartounian left the rest of the 2002 largely stock except for a smaller, three-spoke, wood-rimmed MOMO steering wheel and an upgraded stereo with Bluetooth. He installed a new carpet kit and headliner but reused the original seats and interior panels.

The brakes are stock ’02, albeit with brand-new calipers and lines. The suspension remains stock, as well: Hartounian re-used the same components that were on the car when he bought it. At the end of each axle, however, he fitted eye-catching BBS RS three-piece alloys. They may not be period correct, but they certainly look purposeful, particularly without their center caps. The 15-inch wheels have been shod with Toyo Proxes tires that measure 205/50-15 at all four corners, providing a lot more grip than the original 165-section 13s. 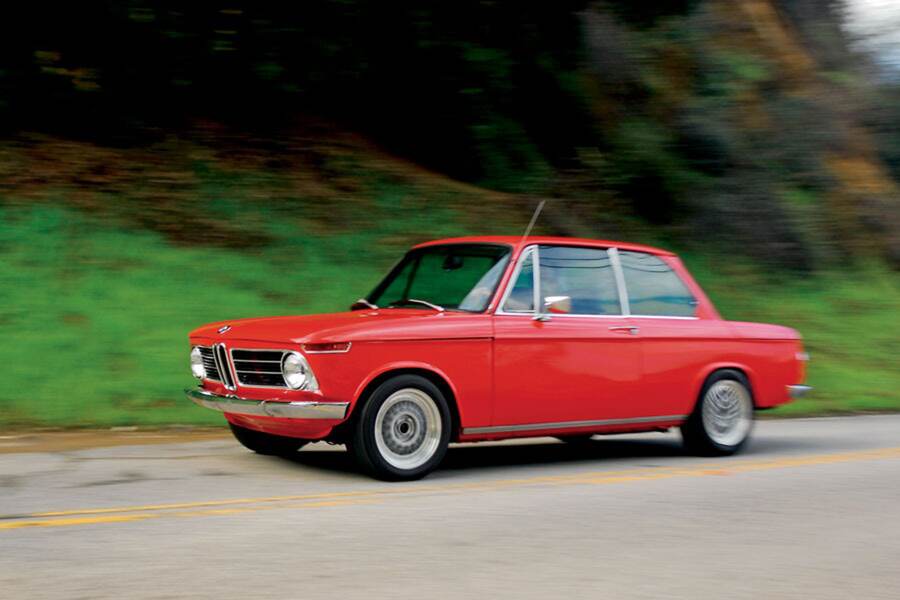 Thanks to the car’s bone-stock appearance inside and out—with the exception of those BBS alloys, of course—this car could pass for an original ’02. Even from behind the wheel, it doesn’t reveal its true character until I aim it at a straight section of road and give the S14 some throttle.

Acceleration is enthusiastic and strong, the fresh engine propelling the lightweight coupe down the road like the proverbial scalded cat. It sounds great, too, thanks to the Magnaflow muffler that Hartounian installed at the end of the exhaust, and which lends a wicked howl at higher engine speeds.

The rest of the car’s performance is much like that of a stock 2002, which is already a nimble, fun car to drive, thankfully. Sure, body roll is a little excessive around corners and the brakes are nothing to write home about, but the transplanted engine has transformed this old BMW into a far more capable machine without sacrificing any of the 2002’s vintage charm. On several occasions during our photo shoot, onlookers commented on what a great car it was.

Working on his ’02 left Hartounian without a daily driver during the course of the project, so he bought an E39 540i Sport that he continues to use for the workaday commute. Although this 2002 was intended to fulfill that mundane purpose, it’s become something of a garage queen instead, stashed alongside his E30 M3 for safekeeping.

Even if he doesn’t drive it every day, Hartounian has saved a fine vintage BMW from rotting away in trailer-park ignominy. That he did so almost entirely on his own at at home is a bonus. 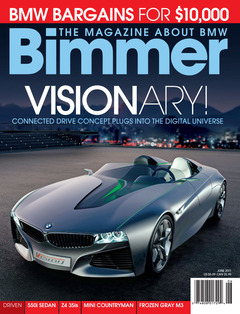