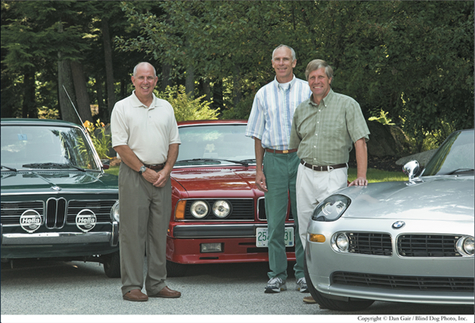 A lot of great companies get their start in garages: Apple, Hewlett-Packard, Amazon, Lotus…and Bavarian Autosport, which began selling BMW parts out of a small garage in Stratham, New Hampshire 40 years ago this summer.

BavAuto was started by three college buddies—Peter Robart, Mark Ruddy and Dave Wason—who continue to run it to this day. All three loved to wrench on cars, especially BMWs, which were still a bit obscure back in 1974.

“When we opened our little enthusiast repair shop,” says Mark, “we never dreamed it would blossom into a worldwide parts business—we were just trying to avoid getting ‘real’ jobs!”

As the marque gained prominence in the U.S. market, so did Bavarian Autosport. The garage in Stratham was quickly outgrown; in 1978, the company moved to Newmarket, NH, where a larger facility allowed them to stock a larger parts inventory. By 1983, BavAuto had sent out its first mail-order catalog; today, the company sends out about 1.5 million catalogs per year, plus 1 million newsletters. The Newmarket facility gave way to a three-story warehouse on the outskirts of Portsmouth, NH in 1995, where BavAuto stocks an inventory of more than 400,000 parts, including many products developed in-house and produced under the Bavarian Autosport brand. The company’s HQ also includes a spacious store…which still takes cash for BMW goodies, allowing enthusiasts to hide their addictions from their significant others!
The founders are still every bit as enthusiastic about BMW—and now MINI—as they were in the beginning, and they continue to drive the cars almost exclusively. Among the founders’ collections are a pristine E24 M6, Z8, 2002 tii, E9 3.0 CS, E93 M3 Convertible and a MINI Cooper S Cabrio. Similarly, the employee parking lot looks like a living museum of BMW history, with examples of the E30, E36, E46, E34, E39, E60, E90, X5, Z3, F10, MINI Cooper and others filling the slots.

The employees are passionate about BMW, and apparently for working at BavAuto: 20 people have worked there for more than 15 years, amassing an amazing amount of knowledge they dispense freely. Sales Manager Gordon Arnold (20+ years), known to many as Bavarian Otto, has just passed five million hits on the company’s YouTube channel, from which he dispenses DIY advice on both BMW and MINI. He is also one of the best drivers I have ever worked with, and I make sure he’s piloting the car whenever I have a tricky shot to pull off for one of BavAuto’s catalogs. [Disclosure: I’ve been shooting photos for BavAuto for close to 20 years, and they’re one of my best and most loyal customers.]

We’ve reported on BavAuto’s annual Show & Shine customer-appreciation day in previous issues of Bimmer, and if you’ve read those reports you know it’s a treat, even though it’s often raining at this October event. Now in its 21st year, the Show & Shine is eagerly awaited by BMW enthusiasts all over the East Coast, who bring their cars to New Hampshire from as far south as Virginia to enjoy the camaraderie of their fellow enthusiasts as well as the merchandise raffle and a free lunch (grilled by BavAuto owners and employees) accompanied by kegs of Portsmouth’s finest Smuttynose beer.

“After 40 years, we still love what we do,” Dave says, “and we still have a passion for BMWs.”

“The amazing thing is we still like each other!” adds Peter.
We share their passion, and we look forward to celebrating Bavarian Autosport’s 40th anniversary at the Show & Shine in Portsmouth this October. We hope to see you there!