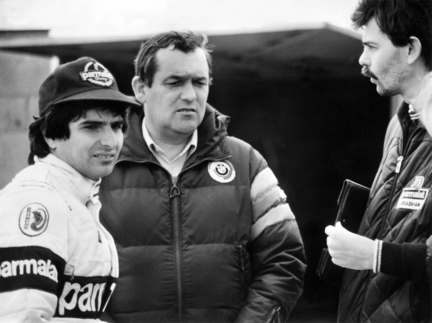 Munich, Germany – April 1st, 2014 . . . Though he embarked on his well-earned retirement 15 years ago, whenever the name Paul Rosche is mentioned among BMW Group engine developers it resonates with reverence to this day. There’s barely a higher accolade for the sporty performance of a new power unit than the statement: “Paul Rosche will like it too.” The engineer who defined engine development at BMW for almost four decades, whose ideas led to legendary triumphs on the race track as well as definitively advancing production engine technology, celebrates his 80th birthday today.

Paul Rosche is the “father” of the turbo engine whose power swept Brazilian Nelson Piquet in the Brabham BMW to the Formula One World Championship title in 1983. This triumph in motor sport’s crowning discipline was the most spectacular, but far from solitary, success spawned by the ideas of the thoroughbred engineer born in Munich in 1934. Other power units that came out of Rosche’s fold were the large 2.0-litre 16-valve four-cylinder engine, which raked in more than 150 race wins and six titles in the Formula 2 European Championship, as well as the 6.0-litre V12 engine that won the Le Mans race in 1995 and 1999.

As soon as he had completed his degree in 1957, the young engineer joined BMW’s engine development division as a designer. His early assignments included calculating camshafts for racing engines. This became Rosche’s specialisation and gave rise to his nickname “Nocken-Paul” (Camshaft Paul), still applied today with a mixture of admiration and affection. In one of his first projects the camshaft was the starting point for a near-complete redesign of an engine. Rosche’s talent and ambition secured his subsequent involvement in the development of all production engines for BMW models, while the derivative sports variants were also designed under his aegis. The 2.0-litre turbo engine under the bonnet of the BMW 2002 that won the 1969 European Touring Car Championship bore Rosche’s signature, as did the six-cylinder engines of the BMW 320i and BMW 323i models from 1975 and 1978 respectively.

It was only logical that, in 1973, Paul Rosche was appointed head of the main advanced development and racing engine development division. Two years later he moved to BMW Motorsport GmbH, where he initially headed development of production and racing engines for the BMW M1 and, from 1979 to 1996, held the post of Technical Director. Rosche’s term of office not only saw the Group enter Formula One but also witnessed the development of the engine for the first-generation BMW M3, which was to be the basis of the most successful touring car in the world as well as a new kind of driving pleasure on the road.

That BMW took the decision to enter Formula One in the early 1980s was also down to Rosche’s dogged determination. Indeed, his team furnished the most compelling argument of all: the engine experts turned a four-cylinder production unit displacing just 1.5 litres into a potential world championship winner. 16 valves, a turbocharger and – in a first for Formula One – Digital Motor Electronics all helped the engine to post an initial output of around 800 hp. The Brabham BMW made its grid debut at the start of season 1982; just 630 days later Nelson Piquet had scooped the World Championship. By 1987 the turbo unit had nine grand prix wins under its belt and its potential seemed almost inexhaustible. Asked about the F1 engine’s maximum power output, Paul Rosche once replied in his inimitable, irresistible manner: “It must have been around 1,400 hp; we don’t know for sure because the dyno didn’t go beyond 1,280 hp.”

The 1983 World Championship car was seen out on the track again last summer at the Goodwood Festival of Speed. Prior to its appearance, the Brabham BMW BT52 had undergone comprehensive restoration work – a special commission involving many of the original mechanics of more than 30 years ago. In amongst them was Paul Rosche. Infatuated with the details as ever, and fondly addressed – through force of habit – by his former colleagues as “boss”, he relished this resurrection of the historic racer. It was Rosche, too, who encouraged Nelson Piquet to come to Goodwood and revisit the cockpit of the BT52. Once again it was the engine guru’s innately Bavarian powers of persuasion that had secured another magical moment in motor sport.