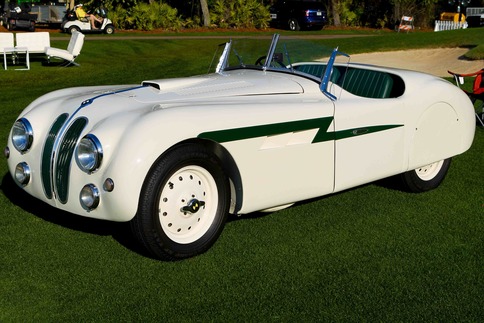 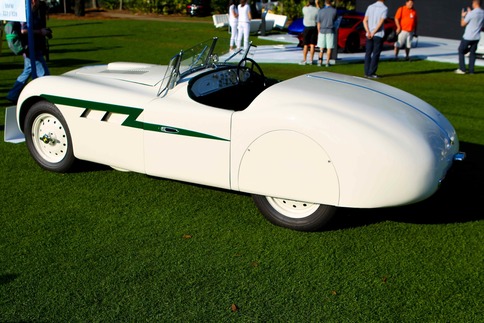 If you’ve been to the Blackhawk Museum, you might have seen an odd-looking 328 on display. The Blackhawk provides minimal (and slightly misleading) information on its placard, so Bimmer got the real story of this peculiar custom-bodied 328…

It’s not the most attractive custom-bodied 328 we’ve ever seen, but #85427 has an interesting history behind its oddball “envelope” body. The car was brought to Amelia Island by the Blackhawk Museum in Danville, California, and the placard on display with the car offered incomplete and misleading information, stating that the car was “one of six that survived the war and was the last 328 chassis built.”

Not exactly: According to Rainer Simons’ definitive history of the 328, #85427 was one of eight 328s ordered by BMW’s English importer, H.J. Aldington, in June 1939. Of those, two were ordered with standard Eisenach bodies while the other six were ordered as rolling chassis to be bodied in England. This was one of the latter, and it arrived in England at the beginning of September, just days after Germany invaded Poland and England declared war on Germany as a result. All eight of these Frazer Nash 328s were confiscated as “enemy property” before they could clear customs, and they weren’t released to Aldington until 1945. At that point, four of the six unbodied cars were given standard bodywork, the fifth (#85424) got a slight variation and the sixth, #85427, got the body it wears today. According to Simons, the slab-sided bodywork was commissioned from Leacroft of Egham, Surrey by Royal Air Force Flight Lieutenant J. Richard Stoop.

According to the Blackhawk, “Dickie” Stoop raced the car to a 6th-in-class, 12th-place overall finish at the 24 Hours of Spa in 1949. Racing Sports Cars confirms Stoop’s result, noting Peter Wilson as his co-driver. This appears to be Stoop’s only race in his custom-bodied Frazer-Nash BMW; according to Denis Jenkinson, quoted on Historicracing.com, Stoop’s success at Spa led him to buy the Touring-bodied roadster entered by the BMW factory in the 1940 Mille Miglia, which Aldington had managed to get to England after the war.
According to Bonhams, which auctioned the car in 2006, Frazer Nash’s records show that Stoop traded it back to Aldington for the Mille Miglia car in 1952, but Racing Sports Cars shows him racing the MM in 1950. It’s impossible to confirm either assertion without photographic evidence, and the only photo we could find specified neither date nor location. It did, however, show the car painted a darker shade than its current white, with its lightning bolt trim painted darker still.

In any case, Stoop died of a heart attack in 1968 while racing his Porsche 911S; Jenkinson says he was a teatotaller who “loved his food,” which may explain why the interior of this 328 was more spacious than standard.

What the car did after 1952 is unknown until 1988, when it was purchased at auction in London by the Rosso Bianco Collection and “preserved.” It had been restored sometime before 2006 and sold by Bonhams that year for around $369,000, most likely to its current owners at the Blackhawk Museum.